41. After Taking Initiation | Way of Living 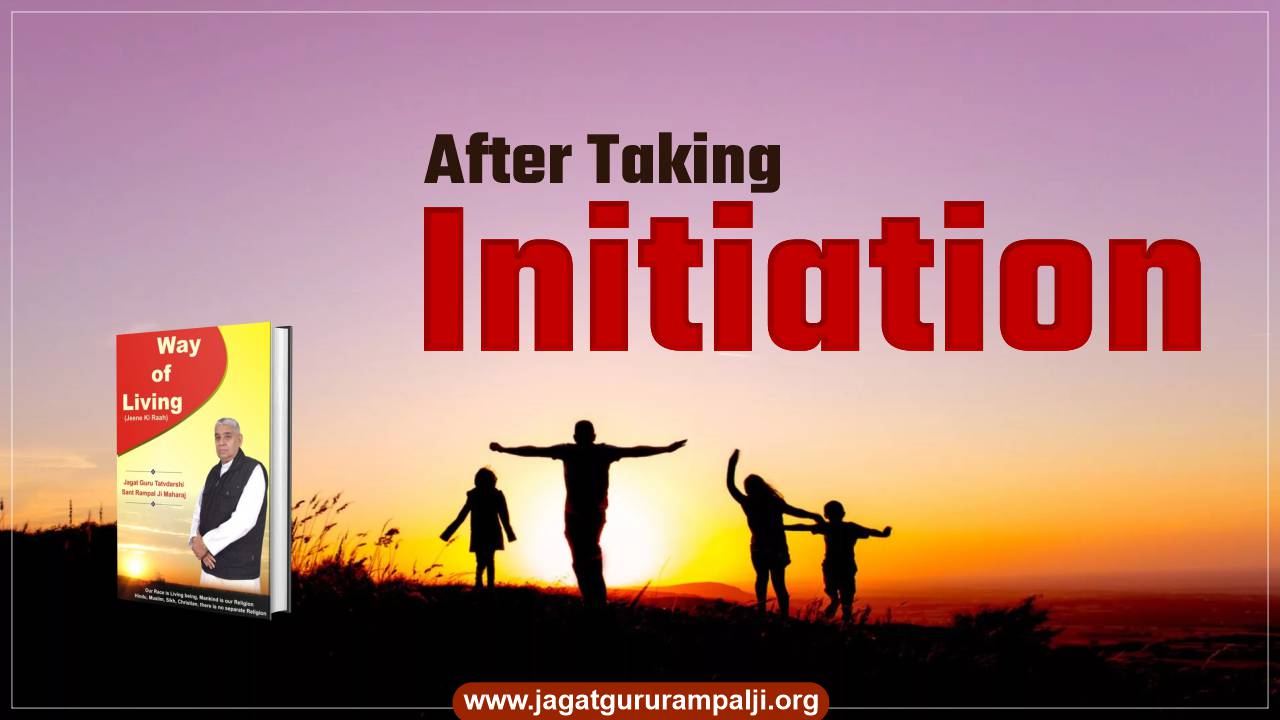 After taking initiation from Complete Gurudev, perform the worship told by Gurudev with full faith and dedication.

Kabir ji has stated that: -

Meaning: - Like, a gardener sows a mango seed. He irrigates it. A few days later, a sprout becomes visible. Still he continues to irrigate it from time to time. He builds a fence of thorny bushes to prevent it. A plant of mango takes around 8-10 years to become a tree. The gardener (owner of the garden who planted it or a servant) keeps watering that plant until then. When it grows into a mango tree, it bears mango fruit. It bears so many mangoes that his family eats them as well as he earns his livelihood by selling them. Similarly, after sowing the seed of bhakti-mantra, that is, after taking initiation, one should continue to water it by reciting it and doing charity. Just like a mango plant, after the gradual growth of plant of bhakti into a tree, there will be heaps of happiness. Just as the mango tree bore tonnes of mangoes; one ate them and also earned money from them; likewise, a devotee should have patience. Gradually, he/she will start getting the result of bhakti.

Only that person can reap the benefit of God’s bhakti who has full faith in the magnifincence of God.

Nothing Is Impossible For God

Every day the Devdoot used to sit for an hour with each of them. They used to discuss about God. Both the worshippers used to spend good time with him. One day, the Devdoot said to God Vishnu, “God! Two supreme devotees of yours live outside Kapila town.” Shri Vishnu said, “One is a supreme devotee and the second one is a fake devotee.” Devdoot thought – “He who is engaged in doing worship for forty years must be a firm devotee because he has a long beard, long matted hair on his head, and forty years is a long time.” Devdoot said, “O Lord! He who is doing your bhakti for forty years must be the supreme devotee.” God said, “No; the second one who has been engaged in bhakti for two years.” God said, “Devdoot! Do you not believe me?” Devdoot said, “Lord! That is not the case. But my low aptitude is making me believe that the older one is a good devotee.” Shri Vishnu said, “Go a bit late on earth tomorrow. Both of them will ask you the reason behind the delay. Tell them that today God had to pass an elephant through the hole of a needle. I have come after seeing that divine act. That is why I am late. Whatever answer they give, from that you will also come to know who the supreme devotee is.” Earlier, Devdoot used to go daily around 8 o’clock in the morning to the older one, and at around 10 o’clock to the younger one. The next day he went to the older one at around 12 o’clock in the day. When the older devotee asked the reason of delay, Devdoot told him, “Today at 11:30 am, God had to perform a divine act; I have come after seeing it.” The devotee who had been doing worship for forty years asked, “What divine act did God perform? Tell me.” Devdoot said, “Shri Vishnu did a miracle. He passed an elephant through the hole of a needle.” On hearing this, the devotee said, “Devdoot! Utter such a lie that whoever hears it can believe it. How is it possible that an elephant passes through the hole of a needle? Do it in front of me.” Devdoot understood that – “God was saying the truth. He is an animal, not a devotee. He does not even have faith in God that God is Omnipotent. Whatever man cannot do, God can. This man’s bhakti is useless and fake.” Devdoot greeted him and departed, and came to the younger devotee. The devotee asked the reason of delay. Devdoot spoke with hesitation thinking that the devotee might use some foul language. Devdoot said, “Devotee, what shall I say? God performed a marvel, a miracle. I was absolutely amazed to see it. God passed an elephant through the hole of a needle.” On hearing this, the devotee said, “Devdoot! What is there to be surprised about in it? God can pass the entire earth through the hole of a needle let alone an elephant.” Devdoot embraced the devotee and said, “Blessed are your parents who have given birth to you. I bow before your firm faith in God.”

Readers! This is just an example. Actually, a devotee should have full faith in God that God can do anything He wishes to do. If someone says that “God cannot do this; God cannot do that”, then he does not derserve to do bhakti. Why to waste one’s time in doing a drama of bhakti? If one will tread on the path of bhakti with full faith in God, one will reach one’s destination.

After taking initiation, no matter how many hardships a devotee faces on the path of bhakti, one should only think that whatever God does, He does it for the wellbeing of the devotee.

Story: - A King and his (Mahamantri) General Secretary were disciples of a Guru. The General Secretary had full faith, but the King used to get less time to listen to the satsang. Due to which, he was not completely familiar with the law of God, but he used to do his bhakti with devotion. The King always used to keep the General Secretary with him. He used to respect him the most. A minister was jealous of the General Secretary due to this. He used to backbite about the General Secretary to the King to make him fall in the eyes of the King. That minister wanted the King to make him the General Secretary. For that, he used to repeatedly say to the King, “King! This General Secretary is not trustworthy. He can deceive you any time.” One day, the King, the General Secretary, that sycophant minister and other ministers were standing in the hall of the palace ready to go to another city. The King took his sword out and started checking its sharpness, and he was also talking to the other ministers at the same time. As a result of which, one of King’s finger got severed and fell on the floor. The sycophant minister said, “O King! What has happened? Our King is so handsome. It is a very unfortunate day for us. Oh! What has happened? Which burden of the people have you taken on yourself?” The General Secretary said, “Whatever happened is good. Whatever God does, is for the good.” The King was in agony, and when he heard these words on the top of it, he felt angry against the General Secretary, and ordered the soldiers, “Put him into the jail.” The same was done. The King appointed the sycophant minister as the General Secretary. The King took medical treatment for his severed finger. In six months the wound of the finger healed. There was no pain. The King now had three fingers and a thumb in his right hand. The King was very pleased with his new General Secretary. Because he had had an opportunity, he used to say to the King, “O King! I had told you several times that he will deceive you. That day, you heard with your own ears that he said that it is good if your finger got cut. He would have been happy to see you dead. He could have got you killed.” The King had started believing everything that sycophant said to be true. One day, the King went to Jungle for hunting with that new General Secretary. Both of them went deep into the jungle. There were some Bheels ahead. They captured both of them and took them to their priest. Those wild people had some festival that day. They had to sacrifice one person and offer him/her to their goddess. They had found two individuals. The priest said, “As you have brought two, we will sacrifice both of them. The Goddess will become happier. But first, examine them that none of their organs are missing, that is, they should not be disfigured; their hand or finger should not be severed.” When they examined them, they found that one person has a finger missing. The priest said, “Leave him. The second one is alright; behead him.” Immediately, they released the King, and beheaded the sycophant General Secretary and offered his head to the Goddess in front of the King. The King set forth and returned to his palace. He straightaway went to the jail and released the previous General Secretary. The King embraced the General Secretary, and said, “When my finger had got severed, you had said that whatever has happened is good. Whatever God does, He does it for the good. This is correct. Had my finger not got severed that day, I would have lost my life today. God did the right thing.” The King then said, “Whatever happened was good for me, but you had to spend six months in jail without any fault. What was good in it for you?” The General Secretary said, “Had I not been in jail today, I would have gone with you. I would have been beheaded there. I would have died. My life has been saved by the six months of jail. This was good for me.”

In this way, a devotee should tread on the path of one’s life with full faith on God.