24. Other Views on Tobacco | Way of Living 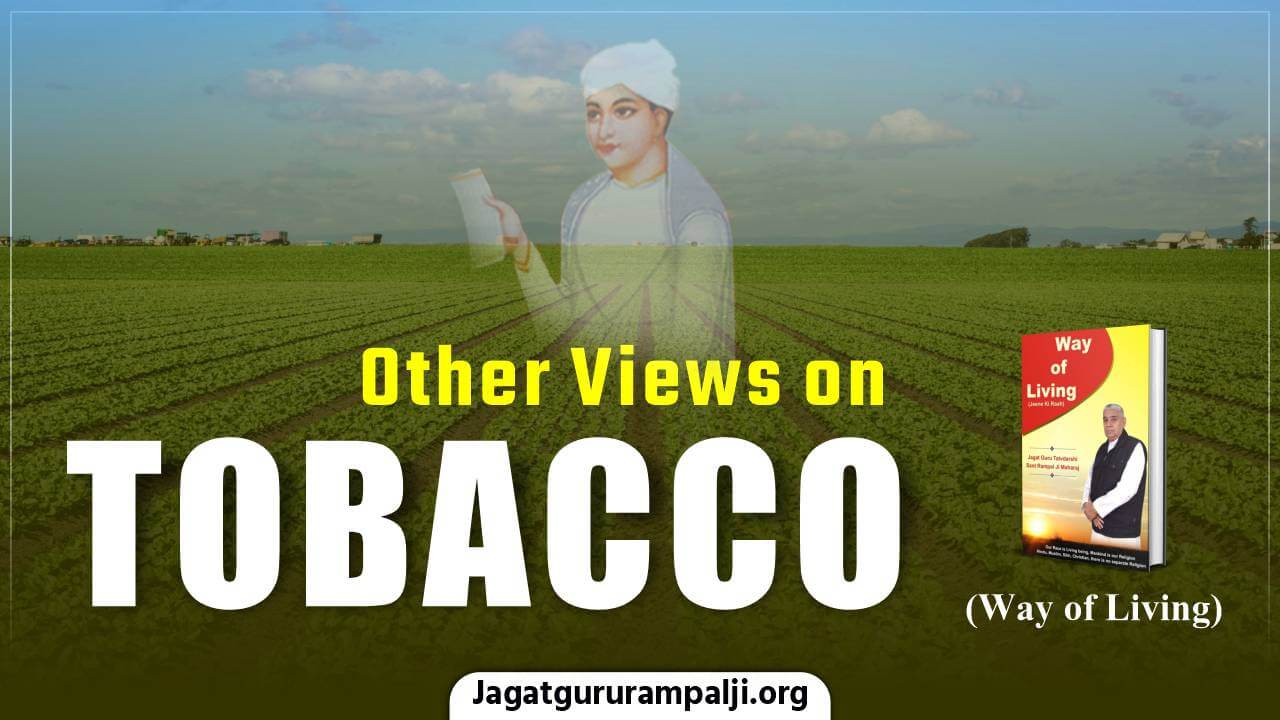 The state of those who smoke hukka has been described: -

Gist: - The gist of the above-mentioned speeches is that human body needs oxygen. Instead of that, the smoke (carbon dioxide) of tobacco enters the body, so people develop a cough disorder. They develop the disease of pitt and baai (baay). The style of sitting of a person who smokes hukka has been described that one or two individuals who smoke hukka sit near the hukka. One sits at a distance and will say, “Push it a bit towards me.” Then others will pass the hukka to him. Then the (nae = pipe through which smoke is sucked) hukka pipe sounds “gurad-gurad”. They themselves get ruined by smoking hukka, and the small children by imitating them will commit the same sin and will drown in the black waters of hell. Those who smoke hukka are themselves indeed very unfortunate, and by instigating others to smoke tobacco, they ruin others too. Those who commit the aforesaid vice waste their lives just as a (Bharbhooja) grain-parcher by excessively heating the sand roasts gram. Then after completing the entire task, he throws the sand in the street. Likewise, a person, who commits the above-mentioned sin, also wastes his life in a similar manner and dies. That living being is thrown in hell and in the street-like lives of other organisms. What answer will those people, who commit the above-mentioned sin, give in the court of God, that is, they will be speechless.

Then, it has been stated that a cow is equivalent to our mother, whose milk is drunk and ghee is eaten by people of all the religions and castes. Therefore, do not kill the cow. The topic of tobacco is going on: -

Tobacco is the biggest hindrance in the path of bhakti. In between our two nostrils, there is a third path; the size of the opening of which is similar to the hole of a small needle. The smoke that is released from the nostrils closes that path. That very path goes to Trikuti above where God resides. The path through which we have to meet God, tobacco closes that very path. We have seen those who smoke hukka; every day they move a thin iron rod through the hukka-pipe, from which the grime of smoke that had accumulated in it comes out. The pipe gets blocked due to that grime. The human life has been obtained only to attain God. The smoke of tobacco blocks the path for attaining God. Therefore, tobacco is the biggest enemy of a devotee. Anyway, people who smoke hukka also believe that tobacco is not a good thing. When a small child sees his grandfather, elder paternal uncle, father or younger paternal uncle smoking hukka, then he also imitates. He starts smoking hukka, then adults, who themselves smoke hukka, threaten that child, “I warn you not to smoke hukka. It is not a good thing.” If you consider it to be a good thing, then let your children also smoke it. If you forbid them, you believe that it is not good; it is injurious. In winters, small children are sleeping in a room and a hukka-smoker is also smoking hukka in the same room. He is himself committing a sin as well as making his family members incur sin by making them ingest the smoke. Grandfather and father try to make small children drink milk from their glass by saying, “Take this. Drink a little bit more. Look, your plait is increasing in length. Drink a bit more.” In this way, they make them drink the whole glass of milk because milk is beneficial for children. If he forbids them to smoke hukka or beedi, then certainly his heart says, “Smoking tobacco is bad, but this vice has become very common in the society. Therefore, one does not get sin.” Like, many tribes eat meat. That sin is a common thing for their children.

In the same way, smoking tobacco is also a heinous sin, but it has become customary that one does not incur sin. One should quit it. Devotee Harlal broke his hukka and chilam the same day. He narrated all the things to his entire family. He made them take initiation. For many generations, there was no hukka in those families of Beri. Later, due to lack of satsang, some people again started smoking.