38. Salvation of a Prostitute | Way of Living 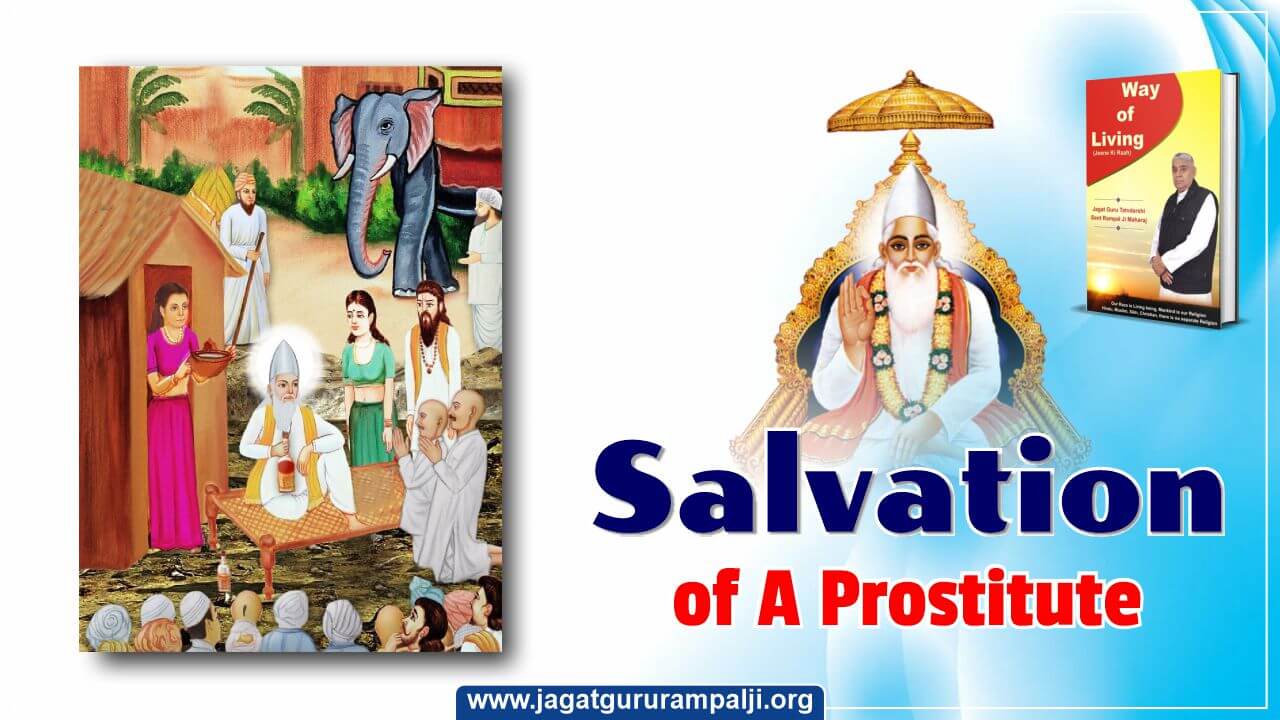 One’s life is reformed by listening to Satsang: -

Supreme God Kabir used to deliver satsang in people’s houses at night. In the day, all the audience and Kabir ji used to do work to earn their livelihood.

One night, Satsang was going on. At a short distance was a magnificent mansion of the famous prostitute Champakali of Kashi City. The prostitute had a shortage of customers that night. Because of which, she was staying awake waiting for them. She heard the endearing nectar-speech from the lotus-mouth of God Kabir ji. It was told in the Satsang that a human (woman/man) life is obtained as a result of a lot of virtuous deeds. Those men and women who do not do bhakti, charity or service are thieves of God. (Even in Gita Chapter 3 Verse 12, it has been mentioned that a person who does not donate some part of the money obtained from God in charity or meritorious deeds, and only fills his/her stomach, he/she is definitely a thief of God.) Those men who commit a theft, robbery, fraud or visit prostitutes are big criminals. Those women who work as prostitutes are also big criminals. They will be given harsh punishment in the court of God. A human life is obtained to perform auspicious deeds and bhakti.

A living being who has obtained human life should first of all go in the refuge of a Complete Guru and take initiation. Then one should perform worship, service, charity and meritorious deeds while abiding by the code of conduct laid by the Guru throughout one’s life. One should also perform one’s daily chores, but one should quit all the vices. Salvation of that person is certain. Due to the lack of spiritual knowledge, a human being (man/woman) leads one’s life by only making accumulation of wealth as one’s main goal. If you have wealth or property worth billions and trillions that you have accumulated by unfair means throughout your life, and suddenly you die, then the wealth accumulated in the entire life remained here itself. Even your body did not go with you. The only thing that went with you was the sins that you incurred all your life while accumulating the wealth.

Meaning: - A person even sells his property to undertake treatment to make his/her body free from disease. It has been stated that even that body will not go with you, let alone the wealth. Taking initiation from a Complete Guru, do bhakti day and night. Tread on the path of life by making the knowledge given by Guru as your basis. Collect the wealth of bhakti by detaching yourself from body and wealth.

O Human Being! See the previous history of man.

Meaning: - King Ravan of Sri Lanka had so much wealth that he had built palaces of gold. When he died, he could not even take a gram of gold with him.

Meaning: - Saint Garibdas ji has also endorsed this very thing that a living being does not get any benefit without bhakti. One keeps wandering all his life to accumulate wealth. King Ravan of Sri Lanka had limitless wealth and gold etc, but while leaving this world, he could not even take a gram of gold with him. Because of not doing the true bhakti of the SatyaPurush (True God), he was handcuffed by the messengers of Yam and taken to Yamraj above. He was put in hell. Therefore, O Man! Be afraid of wrongdoings. Do true bhakti by acquiring a Guru.

While resolving the doubts, Supreme God Kabir told in the Satsang that because of not having the spiritual knowledge, even virtuous men have committed sins. After listening to the Satsang, they quit all the crimes, and by doing bhakti, got their welfare done. God Kabir said, “I have those true mantras of worship that destroy all the sins. Only the virtues remain. (Like currently the scientists have discovered such a medicine which when sprayed in a field, destroys the grass and the weeds, but spares the crop.) I have brought these mantras from my Lok (world).

(Evidence is also given in Rigved Mandal 9 Sukt 95 Mantra 2 that – “God by appearing in person inspires for the true path of bhakti through His nectar-speech. That God, who is the God of all gods, that is, the Master of all, invented the secret mantras of bhakti.) Even if someone is highly sinful, but he starts doing true worship and does not commit any sin in the future, then all his sins get destroyed. By doing bhakti, he/she can get their welfare done.

On listening to the above mentioned nectar-words, that prostitute sister as if woke up from a deep slumber. She started trembling. She locked her house and went to the site of the Satsang. She sat down at the back among the women. After the completion of the Satsang, an announcement was made that whoever wants to take initiation may come forward near Gurudev ji. Some men and women got up and came forward. That prostitute also came forward, and introduced herself to Gurudev ji. She said, “For the first time in 40 years of my life, I have heard such benevolent words. O God! Is welfare of a sinner like me also possible? Although you have given complete solution in the Satsang, when I peep into my abhorrent life, I feel remorseful, and I cannot believe that a criminal like me will be forgiven. Supreme God Kabir said that: -

Meaning: - For example, there is a heap of a crore tonne of hay. If a lit matchstick is thrown in it, then it will turn the entire hay into ash. And then when the wind will blow, it will also blow away that ash. The task is over. Likewise, even if there are sins of crores of births, the recitation of my true mantra will reduce them to ashes. Do not commit any mistake in future; your welfare will be done.

(This evidence is also in Yajurved Chapter 8 Mantra 13 that God destroys the (EnasH EnasH) heinous sins of His devotees. He does the welfare of the living being.)

That sister gave up that sinful work (Prostitution). Taking initiation from God Kabir, by following all the rules and doing bhakti throughout her life, Champakali attained salvation.