51. Sixteen Qualities of a Devotee | Anurag Sagar | Way of Living 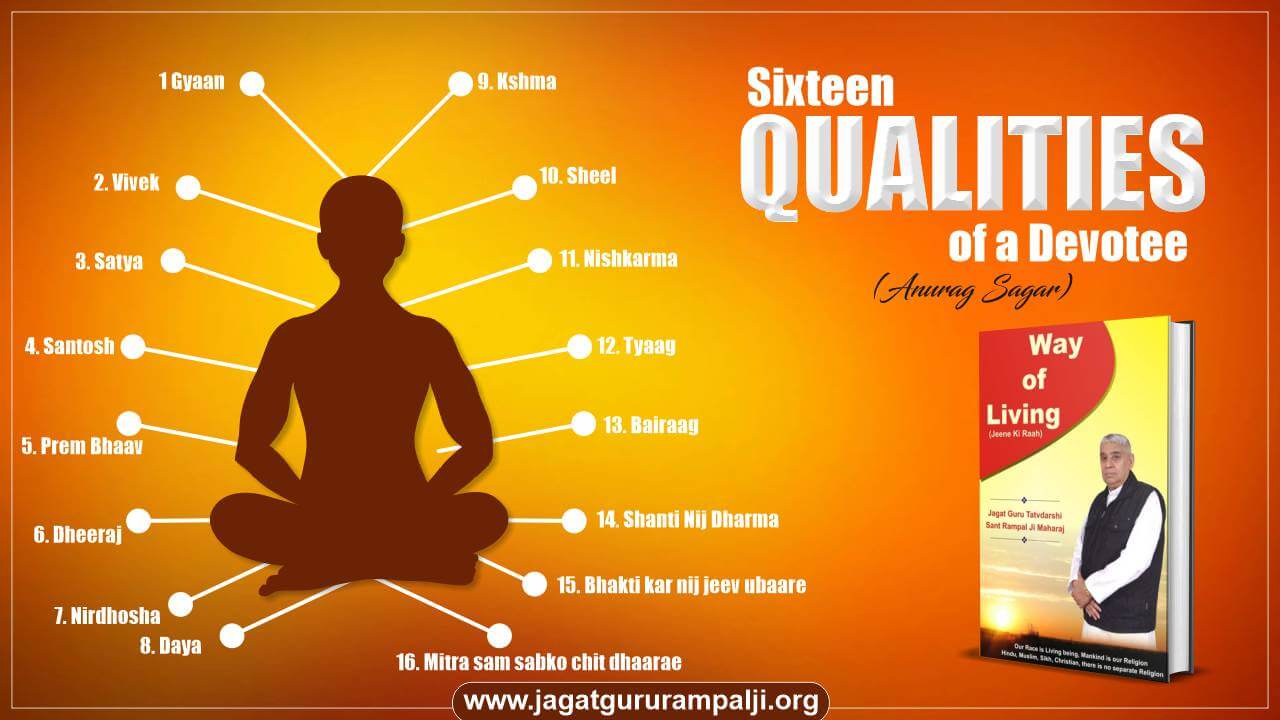 Dharmdas ji asked that – O Lord! You explained the Trap of Kaal. Now please tell me that what a soul should do to attain you?

Sixteen Qualities (Ornaments) of a Devotee

Supreme God Kabir Ji said that – O Dharmdas! To get across this ocean of world, that is, to escape from this Kaal-Lok, the power of Bhakti is needed. For the attainment of God, it is imperative for a soul to have sixteen (16) characteristics. These are said to be the sixteen ornaments of a soul.

Meaning: - A devotee should have some special characteristics for the attainment of God. These 16 ornaments are mandatory.

Tatvgyaan (True and Complete Spiritual Knowledge) 2. Prudence 3. Speak the truth 4. Have contentment in whatever is given by God and consider it to be the wish of God. 5. Do Bhakti with love and speak politely with others. 6. Have patience. Have patience in the success of the knowledge given by the Satguru. Do not rush for the result. 7. Do not deceive anyone. 8. Be kind. 9. Forgiveness is also an ornament of a devotee and a saint. One should also forgive one’s enemy. 10. One should be polite. 11. Do Bhakti without expectation of any result. Do not do it with the aim of obtaining worldly benefits. 12. It is imperative to have the feeling of renunciation. 13. One should be free from wordly desires. For salvation, it is very important to have a special attachment to God considering the world to be vain and one’s life to be temporary. 14. A special quality of a devotee is peace. This is also mandatory. 15. To do bhakti, that is, to get one’s welfare done by doing bhakti. 16. One should behave like a friend with everyone.

After having these abovementioned qualities, one would be able to go to Satyalok. Apart from these, serve the Guru; have faith in the way of worship given by the Guru. It is compulsory to do Bhakti of God and organise Sant Samagam (congregation of saints).

These pages also have the same knowledge. One should give up all the vices; only then one’s bhakti will become successful.

Supreme God told that an initiated person should hold a religious ritual, that is, a ‘Paath’ every fortnight. If one cannot do it fortnightly, then one should definitely do it in a month. For a poor person, God has said that – if someone is poor, then one should do it twice a year or certainly once a year. If one does not even hold a ‘Paath’ once a year, then that devotee will be called a ‘Saakat’ (devoid of Bhakti). Even if one gets one ‘Paath’ done a year, he/she will still get salvation.

The purport is that God stayed with respected Dharmdas; He took him to Satyalok and gave His true introduction to him. Dharmdas ji has done the human society a great favour by writing what he saw with his own eyes and the spiritual knowledge he heard from Supreme God in Kabir Sagar, Kabir Bani, Kabir Bijak, Kabir Shabdavali. Therefore, one should also sing the glory of Dharmdas ji.

A devotee must do bhakti-sadhna and obey the rules until the last breath. Like a warrior either kills in the battlefield or he himself attains martyrdom. He does not retreat. The battlefield of a saint and a devotee is recitation of the Bhakti-mantra and obeyance of the rules. A disciple who turns away from the Guru and disconnects his/her naam (mantra) will naturally find some fault in the Guru. Due to which, he/she will fall in the firepit in hell. If on turning away from the Guru, one abandons bhakti, he/she also incurs a lot of damage.

Example: - Like an inverter is being charged. If in the middle, the charger is removed, then to whatever level the inverter has been charged, it will only give benefit till then. It will only last that long. Then suddenly all the facilities will stop. Consider the state of that disciple to be the same. While remaining in the refuge of the Guru and complying with the rules, for whatever days one did bhakti, the power of bhakti got accumulated in the soul; the soul got that much charged. The day one turns away from the Guru, the power of bhakti stops coming from that very day. If even after turning away (abandoning the guru by opposing him) from the guru, one does the sadhna mantra etc, one gets no benefit. Like after the connection of electricity is disconnected, if one keeps switching on the fans, motor, or bulb, neither the fan functions nor the bulb. Similar would be the state of a worshipper who has abandoned the guru. Then one will go to hell. Supreme God Kabir Ji has stated that: -

Meaning: - A soul who will abandon the Guru will not be saved. He will suffer by (jal-bal) boiling in the firepits built in hell. He will (naachae) dance there due to the suffering of fire, that is, he will oscillate in the fire.

Then he will obtain crores of lives (bodies) of a snake. A snake is very much troubled by the heat of venom inside its body. In hot weather, to prevent itself from that heat of venom, a snake wraps around a sandalwood tree to obtain coolness. Then that Guru-Vimukh, that is, Guru-Drohi (who has abandoned guru) obtains the life of a worm in (bishta) feaces. In this way, a person who has gone away from guru bears extreme suffering. If the guru is fake, then one does not incur any sin by abandoning him and going in the refuge of a complete guru.

Meaning: - O Dharmdas! If a Guru is merciful to a disciple, that is, if the Guru has a good image of the disciple in his heart that the disciple obeys all the rules, then God is also happy with that devotee. Otherwise, the disciple will have to bear the abovementioned hardships.