33. Meera Bai Got Refuge of Satguru | Way of Living 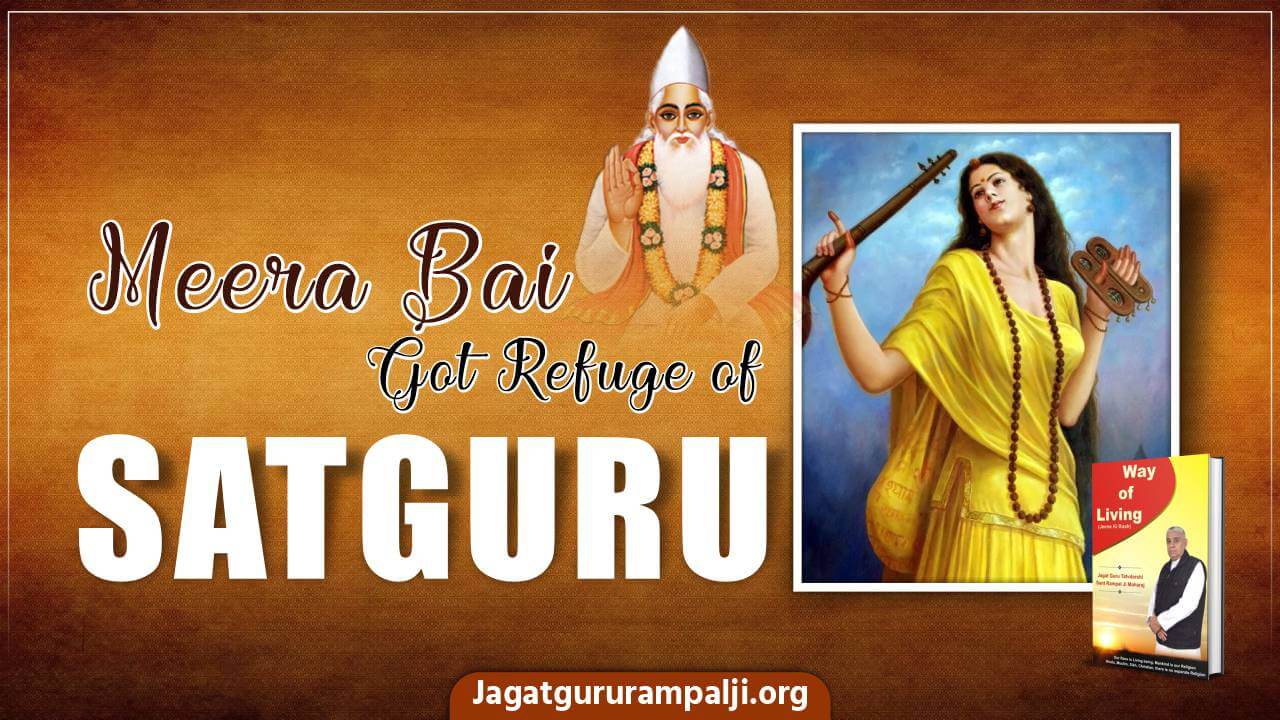 There was a small garden on the way to the temple of Shri Krishna to which Meera Bai used to go to worship. There were also some trees in it that provided dense shade. Supreme God Kabir Ji and Sant Ravidas ji were delivering Satsang there. It was around 10 o’clock in the morning. Meera saw that a discussion and tale of God is going on here. Let me listen to it for some time and then move on.

Supreme God Kabir narrated the brief knowledge of Creation of Nature. He said that – “There is another Almighty God above Shri Krishna ji, that is, Shri Vishnu ji. If one’s birth and death do not end, then whether one did bhakti or not, it is one and the same thing. Even the birth and death of Shri Krishna (Shri Vishnu) did not end. How will it end of his devotees? Like, the Hindu saints say that Shri Krishna i.e. Shri Vishnu imparted the knowledge of Gita to Arjun. The Giver of the knowledge of Gita is clarifying in Gita Chapter 2 Verse 12, Chapter 4 Verse 5, and Chapter 10 Verse 2 that – “O Arjun! You and I have had several births. You do not know; I know. It is self-evident from this that the birth and death of Shri Krishna has not ended. He is not immortal. Therefore, in Gita Chapter 18 Verse 62, the Speaker of Gita has said that – O Bharat! You may go in the refuge of that Supreme God in every respect. Only by the grace of that Supreme God, you will attain Eternal Supreme Abode and supreme peace.”

On hearing these words from Supreme God Kabir’s lotus-mouth, that soul, who was wandering for God, found a new light. After the sermon, Meera Bai questioned, “O Mahatma ji! If you give me permission, I would like to get my doubts resolved.” Kabir Ji said, “Ask question, sister.”

Question: - “O Mahatma Ji! To date I have never heard from anyone that there is some God above Shri Krishna ji. I am in two minds today on hearing this from you. I believe that saints do not tell a lie.” Supreme God Kabir said, “It is the fault of your ignorant religious gurus who themselves do not know what knowledge their Holy Books give. In Devi Puran, Third Skand, Shri Vishnu himself confesses that I (Vishnu), Brahma and Shankar are mortal. We take (Aavirbhaav) birth and (Tirobhaav) die. (Excerpt ends)”

Meera Bai said, “O Maharaj ji! God Shri Krishna grants me his audience. I talk to him.” Kabir Ji said, “O Meera Bai! Do one thing. Ask Shri Krishna ji only whether he has any Master above him. He is a god; he will not tell a lie.” Meera Bai felt that she will go mad if there is some God above Shri Krishna ji too. At night, Meera invoked Shri Krishna ji. The lord of the three worlds (Triloki Naath) appeared. Meera requested to resolve her doubt that – “O Lord! Is there is any God above you as well? A saint has told in the satsang.” Shri Krishna said, “Meera! There is a God, but he does not appear before anyone. We have tried to have a sight of him by doing a lot of meditation and religious practices.” Meera Bai had also heard this in the satsang from God Kabir that – “I will clearly show that God to you. By making you follow true way of worship, I will send you to Him in Satlok.” Meera Bai again questioned Shri Krishna ji, “Can you end the birth and death of a living being?” Shri Krishna ji said, “It is not possible.” Kabir Ji had said, “I have such mantras of bhakti by which birth and death end forever. One goes to that supreme abode about which it is mentioned in Gita Chapter 15 Verse 4 that after getting the Tatvgyan and Tatvdarshi Saint, one should search for that supreme abode of God, having gone where, worshippers never return to the world. Only worship that one God.” Meera Bai said, “O God Shri Krishna! The Saint was saying that he ends birth and death. What shall I do now? I want to attain complete salvation.” Shri Krishna said, “Meera! You may take refuge of that saint and get your welfare done. Whatever knowledge I had, I have told you.” Meera did not go to the temple the next day. She went directly to the saint along with her maids, and expressed her desire to take initiation, and she also shared the conversation she had with Shri Krishna ji with Saint Kabir Ji. At that time untouchability was at its peak. Thakurs used to consider themselves as the best. A person immersed in honour and pride never attains God. To test Meera Bai, Kabir ji said to Saint Ravidas ji, “You may give first mantra to Meera Rathore. This is my order to you.” Saint Ravidas ji obeyed the order. Saint God Kabir said to Meera, “Sister! The saint is sitting there. Go and take initiation from him.” Sister Meera instantly went to Ravidas ji and said, “Saint ji! Give me initiation and bless me.” Saint Ravidas ji said, “Sister! I am from Chamar caste. You are a daughter of Thakurs. The people of your caste will rebuke you. They will ostracize you. Please ponder about it.” Meera Bai was a deserving soul. She was always ready to sacrifice herself for God. She said, “Saint ji! You are my father; I am your daughter. Give me initiation. I do not care about the society. Tomorrow if I become a dog, what will this Thakur society do to save me? The elder Guru ji (Kabir Ji) has stated in the satsang that: -

Saint Ravidas ji went to Saint Kabir ji and told him everything. God said, “Do not delay it. Initiate this soul.” At that moment, Saint Ravidas ji gave first mantra of five naams to sister Meera. He told Meera Bai that this is not their worship. It is their religious practice. The wealth of bhakti that one needs to stay in their loks (worlds), and to eat and drink, is acquired by these mantras only. One is able to pay the debt of this place. Then one becomes eligible for salvation. God Kabir Ji and Saint Ravidas ji stayed there for a month. Earlier, Meera Bai used to go out of the house in the daytime. Then she also started going at night because the satsang was held less during the day and more at night. Somebody used to spare time during the day and someone at night. Meera’s younger brother-in-law Rana became very angry on seeing Meera going out of the house at night, but stopping Meera was like stopping a storm. Therefore, Rana sent for Meera’s mother, and asked her to advise Meera. He said to her, “She has destroyed our honour.” A daughter accepts her mother’s advice. Meera’s mother advised her. Meera immediately gave its answer: -

Ramo became so much engrossed in satsang that whenever Satguru used to come along with his group and stay in the ashram, she used to go in the morning and come back late in the evening. She used to serve there, clean utensils, wash Guru ji’s clothes. She did not even used to leave a single word of satsang unheard. Once, it was winters. The satsang commenced at 10 o’clock in the morning. Guruji said to Ramo, “Daughter! Go and wash clothes on the river. It remains sunny only for a short period of time. If you will go after the satsang, the clothes will not dry. Sister Ramo set off putting the clothes in a bucket. The river was at a short distance. Soaking the clothes in water in the bucket, she put some soda in it. She thought that let me go and listen to the satsang until the clothes are soaking in the soda. Keeping her ear close to the wall outside the ashram, she started listening to the satsang. When on completion of the satsang, she heard the sound of “Sat Sahib”, then she thought of the clothes. She ran towards the river and was scared that – "Today I have committed a mistake. I have violated the order of the Guruji. I will get a scolding. If Guruji will become angry, all my service will be in vain. O God! What has happened?” She reached the river with these thoughts. She saw that the bucket was empty, and the clothes after washing were being dried on the bushes, and they had become dry. Ramo said to those sisters who were already washing their clothes in the river that - “O Sisters! Have you washed these clothes and dried?” All the other women started looking at Ramo. One of them said, “Sister! Have you gone mad or are you kidding? You were yourself impatiently washing the clothes. We were also getting the splashes. We had even objected you to wash clothes slowly. You had yourself dried them on the bushes. Have you consumed cannabis now?” Ramo started crying, and picking all the clothes, put them in the bucket and went towards the ashram. In the ashram an attendant had seen Ramo sitting outside the ashram and listening to the satsang for a long time. The attendant told Guru ji that – “Today your clothes will remain wet because Ramo was listening to the satsang until its completion sticking her ear to the wall outside. Just now she has gone to wash the clothes.” Just then, Ramo entered the ashram, and keeping the clothes next to Guru ji, she started crying badly. When the saint touched the clothes, they were completely dry. When he asked the reason of crying, Ramo said, “Guru ji! You caused grief to yourself and washed all the clothes. I have committed a mistake. I had thought that I will listen to the satsang for some time and then wash the clothes. But I forgot.” Guru ji said, “God Kabir becoming Ramo washed all the clothes.

To remove Abrahim Sultan Adham from hell, God had acquired the form of a maid servant and had borne whips on her body. Daughter, do not worry. Your motive was not wrong. God is hungry of true devotion and longing.” Ramo calmed down. Ramo became prosperous from satsang. She also got salvation.