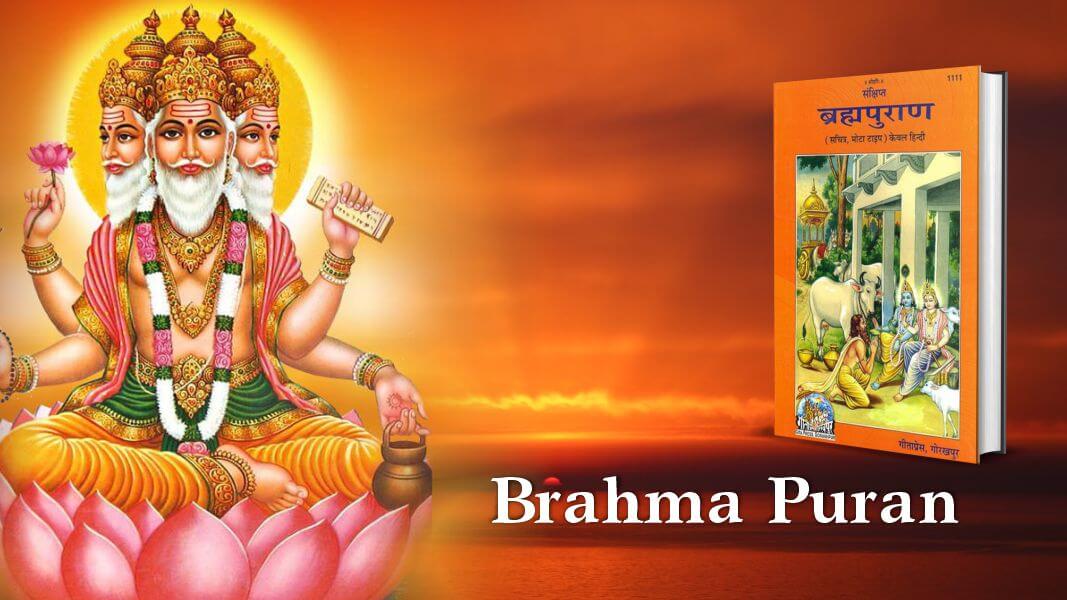 Brahma Purana is a text related to Lord Brahma who is equipped with Rajogun therefore, this is also known as Rajas Purana. Brahma Purana is one of the 18 major Puranas genres of Hindu texts scripted in the Sanskrit language and is also known by names such as Adi Purana, and Saura Purana. Sage Vedvyas Ji is the writer of Brahma Mahapurana and he wrote this in the Sanskrit language. The existing manuscript Brahma MahaPurana comprises 245 chapters and contains almost 7000-8000 verses. Unlike Vedas, which describe Who is the Supreme God who created the entire universe? Puranas are the personal experiences of Lord Brahma and/or some sage / saint which is merely the hearsay knowledge (lokved) and is not complete and correct.

Let us explore folklore vs facts mentioned in Brahma Purana through the following.

Shri Brahma Ji is the eldest son of Brahm-Kaal and Goddess Durga (evidence in Shrimad Bhagawad Gita Chapter 14 Verse 3, Shiv Purana, and Shri Devi Bhagavata Purana) who heads the Rajogun department only in twenty-one universes. His job is to create living beings. Lord Vishnu and Lord Shiva are his younger brothers who head the Satogun and Tamogun departments respectively. Shrimad Bhagawad Gita states in Chapter 14 Verse 5 that ‘these triple Gods-Rajogun-Brahma, Satogun-Vishnu, Tamogun Shiva binds the soul in the body, that is, do not allow the soul to be liberated’. Brahma Ji is not the doer (Gita Chapter 14 Verse 19). Brahma Ji is in the cycle of Birth and Death (Evidence Pious Shrimad Devi Bhagwat Mahapuran). Similar are his worshippers. Lord Brahma’s one biggest mistake made him a non-worshipable God. Brahma Ji is cursed by his mother Durga.

Description of Nature In Brahma Purana By Shri Lomharshan Rishi

Brahma Purana mentions hearsay knowledge. The narrator is Shri Lomharshan Rishi Ji, who was the disciple of Shri Vyas Rishi and who is also known as Soot Ji. Explanation by Shri Lomharshan Ji (Soot Ji) regarding the creation of nature.

Speech of Shri Lomharshan Ji (Soot Ji)- He told that previously Shri Brahma Ji had narrated this knowledge to Daksh-etc eminent sages. I will narrate the same. In the Adhyay named "Srishti ka Varnan" (Description of Nature) of this Puran (page 277 to 279), it has been stated that Shri Vishnu Ji is the basis of the whole world, who is in the form of Brahma, Vishnu, and Shiv; who does the production, preservation, and destruction of the world. I salute that God Vishnu.

One who is always everlasting-true form and the primary cause unmanifested Prakriti / Durga / Maya / Ashtangi; she only is called Pradhan. From her only, Purush has created the world. Consider the immeasurably brilliant Brahma Ji to be Purush. He creates all the living beings and is dependent on God Narayan.

The self-existent (Swayambhu) God Narayan created the water. Because of being born of Narayan, the water started being called ‘Naar’. First of all, God took rest on the water. Therefore, God is called Narayan. God released his power in the water, from it a golden egg appeared. It is heard that in that only the Swayambhu Brahma Ji was born. After residing in the egg for a year, Shri Brahma Ji broke it into two pieces. From one Dhoolok (city of gods in the sky) was formed and from the second, Bhoolok (Earth). Thereafter, Brahma Ji made Rudra appear from his anger.

Note: The above-mentioned knowledge has been said by Rishi Lomharshan (Soot Ji), which is hearsay (lokved). This is not complete and correct. Because the speaker is saying that, this has been heard.

Note: At the inception, God Kabir came in Satyug and met Brahma Ji and gave him true spiritual knowledge. Shri Brahma Ji explained the same further to sages/saints. Each of them added their personal experience and started narrating to others resulting which the actual knowledge getting dissolved and only hearsay knowledge reached to devotees.

Fact- Rajogun Brahma creates living beings in only twenty-one universes of Brahm-Kaal. He is this much creator only and not the creator of the entire universe. The universe is created by Param Akshar Brahm/Satpurush KavirDev. He is self-existent. God Kabir Saheb created everything which is between the Earth and the Sky. He is God Narayan. Narayan means one who is “Sarvgatam Brahm” ie. Omnipresent (Gita Chapter 3 Verse 15). He is the overall controller. The reference of the golden egg is for Brahm-Kaal who is the owner of twenty-one universes and was created by Satpurush with word power from an egg. Satpurush only created Dhoolok ie. the immortal world-Satlok.

Aforesaid, the narration of the creation of nature by Shri Lomharshan Ji is hearsay, hence, incorrect.

The complete information of Shri Devi MahaPuran, Shri Shiv MahaPuran, Shrimad Bhagwad Gita, and four Vedas and the Tatvagyan (true spiritual knowledge) is given by Purna Parmatma in the nectar speech uttered from His Lotus-mouth which is scripted in Swasam Ved/Sukshma Veda i.e. Kavir Vaani (Kabir Vaani/Kabir Speech).

God Kabir by Himself appearing in Kalyug, properly explained the true knowledge again to His special disciple Shri Dharam Das Ji (resident of Bandhavgarh, Madhya Pradesh), which is mentioned in these books, in “Creation of Nature”.

Important: The fact is this Brahm-Kaal, the giver of the knowledge of Shrimad Bhagwad Gita in Adhyay 4 Sloka 5 and 9, Adhyay 2 Shlok 12, and in Adhyay 10 Shlok 2, is himself saying that ‘Oh Arjun! You and I have had several births. You do not know; I know’. This means Brahm-Kaal is in the cycle of birth and death and ignorant Shri Parashar Ji in Brahma Purana narrates knowledge that does not hold evidence from holy scriptures.

There is evidence in Gita Adhyay 7 Shlok 18, that Brahm-Kaal calls his Sadhana also as (Anuttamam) very bad / inferior. This proves that the narration by Shri Parashar Ji in Brahma Mahapurana is hearsay (lokved).

Please think: - The knowledge of Vishnu Puran has been said by a Rishi, who has said based on Lokved (hearsay knowledge i.e. baseless stories), and the knowledge of Brahma Puran, Shri Lomharshan Rishi had heard from Daksh-etc Rishis; he has written that. Therefore, to understand both (Vishnu Puran and Brahm Puran) mentioned above, help will be taken from Shri Devi Puran and Shri Shiv Puran. Shri Brahma Ji himself narrated to his son Narad Ji, which was received and written by Shri Vyas Ji. The knowledge of the other Puranas cannot be similar to the knowledge of "Shri Devi Puran" of Shri Brahma Ji because it was directly received by Narad Ji, and Vyas Ji had written it. Therefore to understand other Puranas, assistance will be taken from Shri Devi Puran and Shri Shiv Puran. Because this knowledge has been given by Daksh-etc Rishis' father Shri Brahma Ji.

To understand Shri Devi Puran and Shri Shiv Puran, assistance will be taken from Shrimad Bhagwad Gita and the four Vedas. Because this knowledge has been imparted himself by God Brahm in Kaal-form, who is the originator i.e. father of Brahma, Vishnu, and Shiv Ji. To understand the knowledge of Holy Vedas and Holy Shrimad Bhagwad Gita Ji, we will have to take help from Swasam Ved i.e. Suksham Ved which has been given by Kaal-form Brahm's originator i.e. father Param Akshar Brahm (KavirDev); which SatPurush, on appearing, had Himself uttered through (KavirgirbhiH) Kavir Vaani / Kabir Speech. (Evidence is in Rigved Mandal 9 Sukt 96 Mantra 16 to 20). And in Shrimad Bhagwat Gita God Kaal i.e. Brahm has himself explained his state, which is true.

In Gita Adhyay 15 Shlok 18 it has been said that I (Kaal-form Brahm) am superior to all the living beings in my twenty-one Brahmands. Whether they are perishable in the material body or are imperishable in soul-form. Therefore, based on Lokved (hearsay knowledge), I am considered to be Purushottam. In reality, Purushottam is someone other than me (Kshar Purush i.e. Kaal) and Akshar Purush (ParBrahm). He only is actually called Parmatma i.e. God. He, entering into the three loks, nurtures and protects everyone. He only, in reality, is the Imperishable/Eternal Supreme God (Gita Adhyay 15 Shlok 16, 17).

Keeping in view the hearsay knowledge mentioned in Brahma MahaPurana it is evident that Shri Brahma Ji’s knowledge is limited and he is not worshipable. Therefore, the giver of the knowledge of Gita Brahm-Kaal tells in Adhyay 18 Shlok 62 that ‘Oh Arjun! Go in the refuge of that Supreme God in every respect; by His grace only you will attain supreme peace and will attain the lok which will never be destroyed i.e. Satlok.

In Adhyay 15 Shlok 4, the giver of the knowledge of Gita has said that when you find a Tatvadarshi Saint (about whom it has been mentioned in Gita Adhyay 4 Shlok 34 and Adhyay 15 Shlok 1), after that you should search for that Param Pad (Supreme state) of Parmeshwar, having gone where worshippers do not return to the world i.e. attain complete salvation; the Supreme God from whom this whole world originated and He only is the sustainer of all. I (the giver of the knowledge of Gita) am also in the refuge of Aadi Purush Parmeshwar. One should only do His bhakti Sadhana i.e. worship with full faith.