49. What Should be the Nature of a Devotee Like | Anurag Sagar | Way of Living 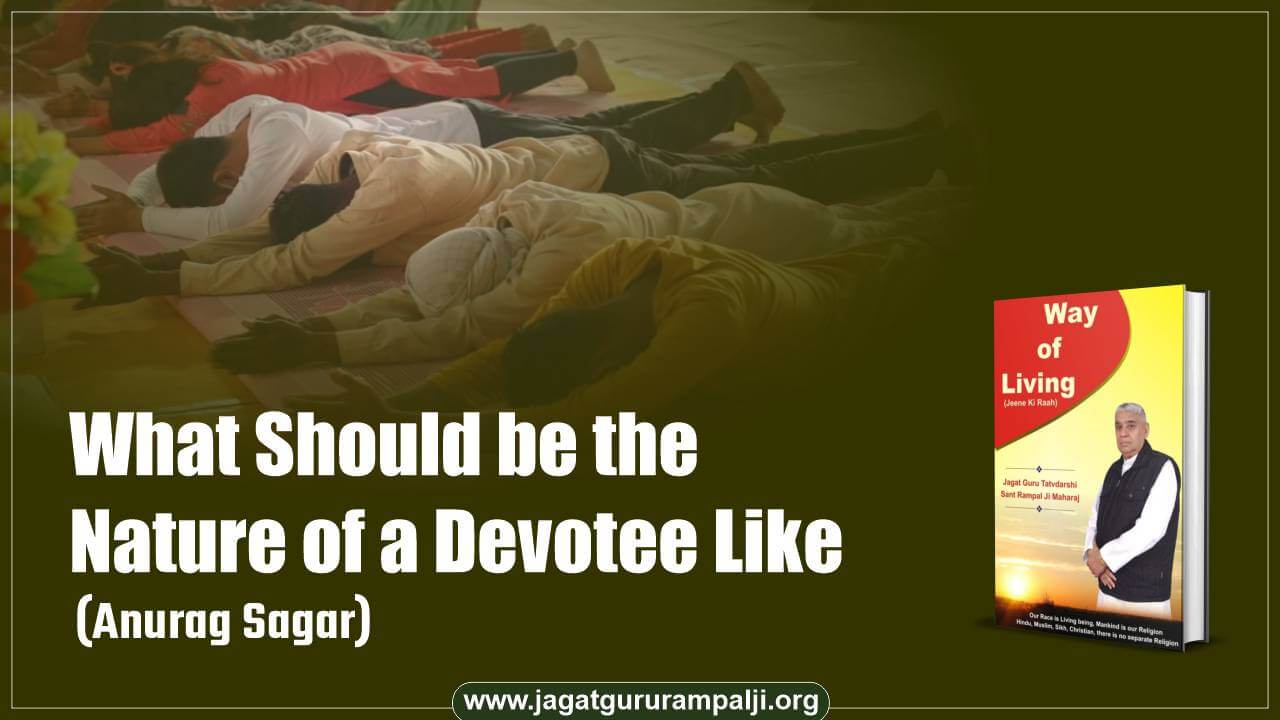 Meaning: - The meaning of line no. 7 to 17 written on Page 6 of Anurag Sagar is that Dhani Dharmdas ji politely put a question to Supreme God Kabir Ji that – O Lord! Please explain to me what is the nature of a Mritak (dead person) like? How one has to die while being alive? O Immotal God! O Master! Please (biloye) draw the conclusion and tell me that nectar-wealth, that is, the path of becoming immortal.

Supreme God Kabir Ji stated that – O Dharmdas! This question that you have asked is a complex topic. Only an aspirant of knowledge, who remains in the refuge of Satguru, by comprehending it can succeed in it.

Saints and worshippers search for God by becoming dead while being alive. By doing ‘Shabd Vichaar’, meaning by properly understanding the true mantras, they reach the end point of that path, that is, they attain complete salvation.

Like, there is a Bhring (a blue-colour insect with wings) which is called Bhambheeri; it is also known by the names like ‘injanhaari’ etc, and it continuously makes a sound of ‘Bheen-bheen’. It does not give rise to offsprings by the method of intercourse between a male and a female. It goes near a particular insect. It keeps doing its sound of ‘bheen-bheen’ next to that insect. If any insect becomes influenced by its sound, it carries that insect and takes it to an already prepared home of mud. That circular shaped house is of two inch circumference, has one or two openings and is made of mud. Then it takes the second and the third one in it. Then it keeps doing its sound of ‘bheen-bheen’ on them. Then bringing the water from dew drops with its mouth puts it into those insects’ mouth. On repeatedly hearing the sound of that Bhambheeri i.e. Bhring, that insect becomes of the same colour and develops wings just like it. It also starts producing the sound of ‘bheen-bheen’ like that of Bhambheeri. It itself becomes a Bhambheeri only. Similarly, a complete saint by repeatedly uttering his knowledge like a Bhambheeri even makes an ordinary person a devotee. Then that devotee also starts narrating the knowledge heard from Satguru to other people. Because of abandoning the customs and traditions of the world, other people say that his/her mannerisms have changed. He/she has become a devotee. Like when a Bhring (bhambheeri/beetle) utters sound to the insects, then someone quickly becomes active, someone becomes active after the second time, or someone at the third time. Likewise, when Satguru narrates his satsang from time to time to some people, then a person of good previous deeds agrees quickly; someone acquires the path after listening to the satsang one or two more times, and then he/she takes initiation. Some insects are such that they change their nature after many days. If that insect has not become a Bhringi and is living in the refuge of that Bhring, then one day it will definitely change. Supreme God Kabir Ji has stated that – O Dharmdas! If a disciple will keep listening to the viewpoints of Guru ji in this way, then he/she by being influenced like that Bhring insect, changing his/her wordly nature and by becoming a devotee, will attain the Hans state.

Kabir Ji said – “O Saints! Listen to the nature of a Mritak (dead). Only someone rare follows in this way. He/she obtains the ‘mag’ i.e. the path of acquiring the ‘Peev’ i.e. God. Apart from the example of Bhring mentioned above, listen to the nature of a ‘Mritak’, so that by being ‘Mritak’ (dead), that is, by behaving like a dead while being alive, one does sadhna according to the way of worship (padyati) told by Satguru.”

Like, the earth is tolerant. Similarly, one who will acquire the quality of the earth is (jeevit mritak) dead while being alive and only that person becomes successful. If someone defecates on earth, or puts faeces over earth; if someone tears it apart while doing farming; someone worships the earth; the earth does not see merits or demerits. ‘One acts according to one’s beliefs’ - thinking this the earth instead of opposing remains pleased.

The meaning is that just as earth is tolerant, similar should be the nature of devotees and saints. Whether someone says wrong things that – ‘what are you doing’, that is, insults you or someone honours you, a devotee succeeds by remaining firm on his/her goal.

Like, a farmer sows sugarcane. At that time, he breaks sugarcane into one foot long pieces and plants them into the earth. The sugarcane after growing is crushed in a crusher. Then its juice is boiled on flame in a wok. Then jaggery is formed. If the juice of sugarcane is given excessive heat, then it becomes khaand (brown sugar) which is tastier than jaggery. If it is heated more, it becomes sugar. If it is heated even more, it becomes Mishri (sugar-candy). Then from mishri, kand (white crystallised sugar) is formed. Supreme God Kabir Ji has said that – O Dharmdas! In this way, the more a disciple bears hardships on the path of bhakti, the dearer and more precious he/she becomes to God.

The essence of Pages 8 and 9 of Anurag Sagar is that only he is a worshipper who restrains all his senses. One gets contented with whatever one gets. One does not get attracted on seeing someone beautiful. One does not hate someone ugly. One sees both of them with the eyes of divine knowledge that the above skin is white or black; the bones and muscles inside are the same and on getting a disease a body starts decaying and stinking. In this way, do bhakti with prudence. If someone honours you, speaks to you politely then do not be happy. If someone says harsh words to you, then do not get upset. Knowing the level of their intellect, remain calm. If someone feeds you good food, Kheer-Khaand, halwa-poori, then do not get impressed by them just because of that. They will get the result of their deed. If someone feeds plain food to you, then you should eat it with more passion and love. Only that devotee can attain God who does not give importance to sex. If lust bothers you, then seek enjoyment by engaging your mind in recitation of naam (mantra). Instantly, the lust will die down. The method to destroy lust: -

Supreme God Kabir Ji giving an accurate example has guided a devotee that you are not a permanent resident of this world. You have to leave it and go. Your family is above in Satyalok. You have fallen on this earth. The state of mind of a devotee who has gained Tatvgyan (true & complete spiritual knowledge) should be similar to that of the baby of Anal (Alal) Bird. Until the time to go to Satlok comes, live in a civilised manner with the wordly people. While going from here, you should not have any attachment to them. We have to fly away taking along the earning of the recitation of our mantra and the earning of the meritorious deeds with us. We have to go to our family in our home in Satlok.

On this page, Supreme God has disclosed the secret of the inside of the body. This human body has 72 ducts. Three (Ida, Pingla, Sushmna) are main among them. Then there is a special duct “Brahm Randra”.

Supreme God Kabir Ji has told that – Dharmdas! Man (mind) itself is Jyoti Niranjan. It makes the soul dance in such a way like a juggler makes a monkey dance. In this body, there are three agents of Kaal – 5 elements, 25 Prakriti and 3 Gunas. They deceive the soul. Both Kaal Niranjan and the soul play an important role in the body. Kaal Niranjan in the form of Man makes one commit all the sins, and keeps all the sins on the soul’s head.

Kaal has misled in such a way that the soul has forgotten the Supreme God.