18. Effect of Company and Faith in God | Way of Living 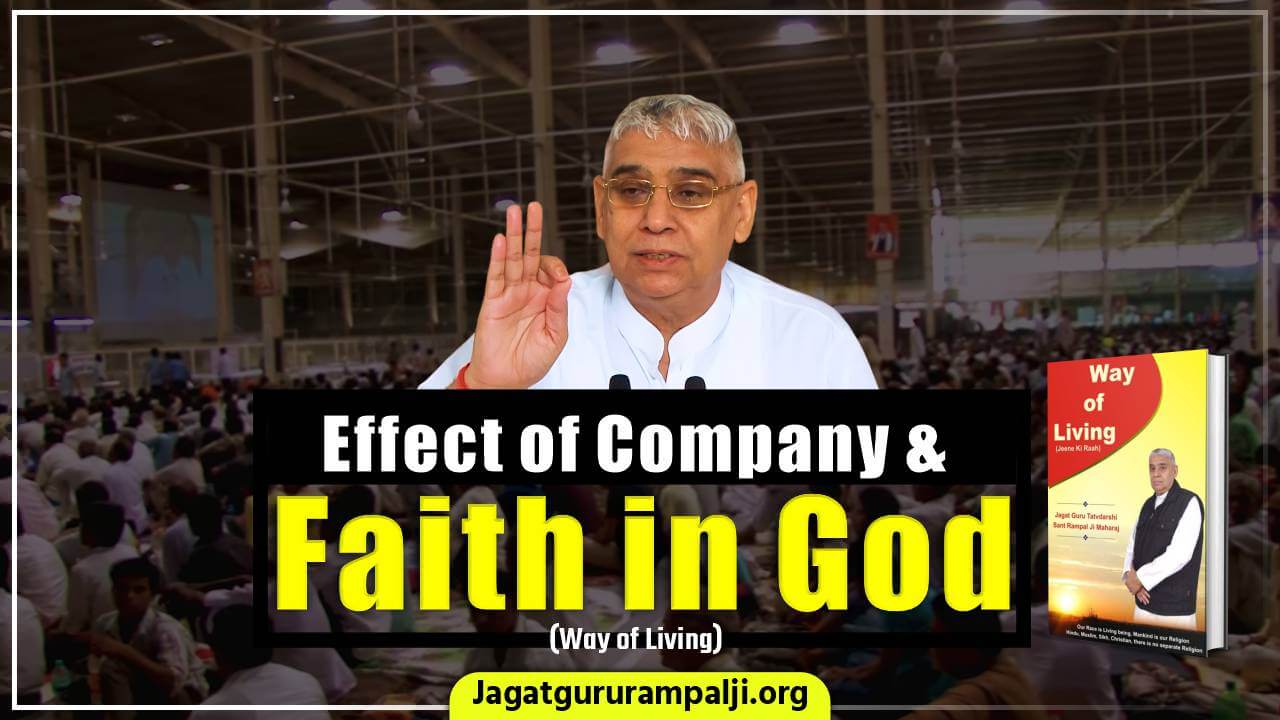 In a village, a person had been married for ten-twelve years. He did not have a child. There was a monastery outside that village at a distance of approximately two kilometers. A Siddh Saint used to reside in it. He used to bring alms from the village, and used to keep eating it for three-four or more days. One day, he went to that person’s house who did not have any child to get alms. Both the man and woman held the sage’s feet and pleaded for attainment of a child. The sage said, “You can get offspring on one condition.” The man and the woman asked, “Tell us.” The sage said, “When the first son would be born, you would have to offer him to me after two years. I will make him my successor. If you accept this, then tell me. After that, you will have a girl and then a boy.” Both of them accepted that condition. By the blessing of the sage, in the tenth month, they had a baby boy. After he turned two, they entrusted him to the sage. At that time, the woman was again pregnant. She gave birth to a baby girl. Then they had one more son. Due to this, the glory of the sage grew further. Entrance of young girls was prohibited in that monastery. When that boy turned sixteen, one day the Guru developed a boil on his chest near the nipple. As a result of which, the sage started remaining very restless with pain. He put some herbal medicine on his boil. In four-five days that boil ruptured and healed. Then the sage became normal. After a few days, the sage developed fever. Because of the weakness arisen from the old age and the fever, he became incapable of walking. The sage had never sent that disciple to get alms from the village, thinking that the young boy may commit some wrongdoing by falling into bad company by sitting with young boys in the village. He might develop a desire to marry.

But that day, feeling helpless, the sage said to his disciple, “Son! Go; get alms, and whatever you get from the fourth house in the first street, just bring that and do not go any further.” The boy as per his Guru ji’s order only went to that house’s gate, and said, “Alakh Niranjan!” A fourteen years old girl came out of that house to the gate to give alms. That sage boy was carefully looking at her breast. The girl noticed that there is a wrong intention in the sage’s vision. The girl said, “Take alms, Baba.” The sage boy said, “O daughter of a mother! You have two boils on your chest. You may come to the monastery. My guru ji will cure your boils. O daughter of a mother! You must be in a lot of pain. My guru ji was excessively troubled by just one boil.” Hearing this from the sage boy, that girl’s surmise became even firmer that the sage is not of a good character. The girl started speaking loudly that – “Get your mother and sister’s boils cured. Rascal! I will hit you with a shoe.” Saying this, the girl took her shoe off, and said, “Go from here. Never come here again.” On hearing the noise, that girl’s mother also came to the gate, and asked, “Daughter! What happened?” The girl told that sage boy’s deed to her mother. The mother asked, “Baba ji! From where have you come?” The sage boy told that – “I have come from this monastery. My guru ji has become unwell. He is incapable of walking. Therefore, for the first time he has sent me to get alms. I am his disciple. I had just asked this sister that you have two boils on your chest; you must be in great distress. My guru only had one boil and he used to remain agitated day and night due to pain. He knows the medicine. You may go to my guru and get your boils cured.” The sage boy was that woman’s son whom she had offered to the sage. That girl was the younger sister of that sage boy. Her mother told her that – “He is your brother whom we have offered to the sage. He has been unexposed to the evil talks of the world. He does not know anything. Daughter, the vice that you thought he has is not in this brother of yours. He was speaking from a pure and clear soul. You threatened him thinking he was committing mischief like the flirtatious youths of the village.” Mother said, “Sage! My daughter does not have boils on her chest. These are breast. See! Just as I have on my chest. We will marry her off. She will have children. Then her children will drink milk from her breast.” The sage boy said, “O Mother! When will she get married? When will she have children?” Mother said, “We will marry her off after three-four years. Then she will have children two-three years after that.”

The sage boy contemplated from the spiritual point of view that God is so much worried about the child who is going to take birth. He has made arrangements for him to drink milk 7-8 years prior to his/her birth. Will He not make arrangements of our food in the monastery? We, guru-disciple, completely rely on Him. From today onwards, we will not ask for alms. He was just contemplating this when the mother asked, “Baba ji! What are you worrying about?”The sage boy said, “Mother, now worry has ended.” On saying this, he threw his bag along with the alms on the street and returned to the monastery empty-handed. Guru ji asked, “Why did you not bring alms? Did anyone snatch your bag?” The boy told, “Guru ji! When God makes all arrangements for the food of a child 7-8 years prior to his/her birth, then will He not make arrangements for us in the monastery? He will certainly do. Therefore, I have thrown the bag on the street.” The sage understood that this shirker has thrown his bag on the way so that he does not have to go every day to get alms. The sage was helpless; he did not say anything. He thought that – ‘Tomorrow I will myself somehow bring the alms whether I am happy or distressed.’

When after throwing the bag and the alms on the street, the sage boy returned to the monastery, God inspired some of the people of the city that the older Baba is unwell. Someone has said something to the younger baba; he threw away both the bag and the alms and went away. The sage is hungry and the boy is also hungry. Thinking this, they prepared good food. Preparing rice pudding, chapattis, lentil, first of all one person arrived at the monastery and said to the sage, “The younger baba getting annoyed with someone did not bring alms. He threw away his bag and alms. Please eat food.” The sage said, “First of all, feed the boy.” The boy said, “First guru ji will eat, then the disciple will eat.” The sage started eating food. Meanwhile, another person came with halwa, poori and chickpeas curry. In this way, around ten villagers brought food to the monastery thinking the same. The disciple said, “Wow God! We did not know that you are so good. That is why; we used to worry less about your name and more about the food.” The villagers fixed their turn that every day food should be sent from one home to the sages. The same happened.

Moral: - You will become like your companions. One sees ones defects in others. Without faith in God, a devotee is incomplete. Even begging for food is against the Holy Scriptures because if the devotion and the faith of the devotee are true, then God makes all the arrangements. But the best thing is to consume food while performing the duties of a householder. The duty of sages and saints is to deliver spiritual discourses (Satsang) and to do bhakti. If one does with true devotion, then he would not have to beg. From the knowledge gained from God Kabir, Sant Garibdas ji has stated in his nectar-speech that: -

Meaning: - The gist of the above-mentioned speeches is that those who do not do true bhakti according to the scriptures, those people acquiring an attire of a sage roam around asking for alms just as a dog goes to seventy house for a piece of bread. For example, those of other castes, acrobats-pernein, kaanjar and saanshi used to wander for food. If a sage also does this, then there is a flaw in his way of worship. Supreme God Kabir used to do his daily work of a weaver, and also used to perform true way of worship and satsang. The evidence of how God helps someone who performs true way of worship has been given by Kabir Ji himself. The story is as follows: -