27. Service and Respect of Parents is a Prime Duty | Way of Living 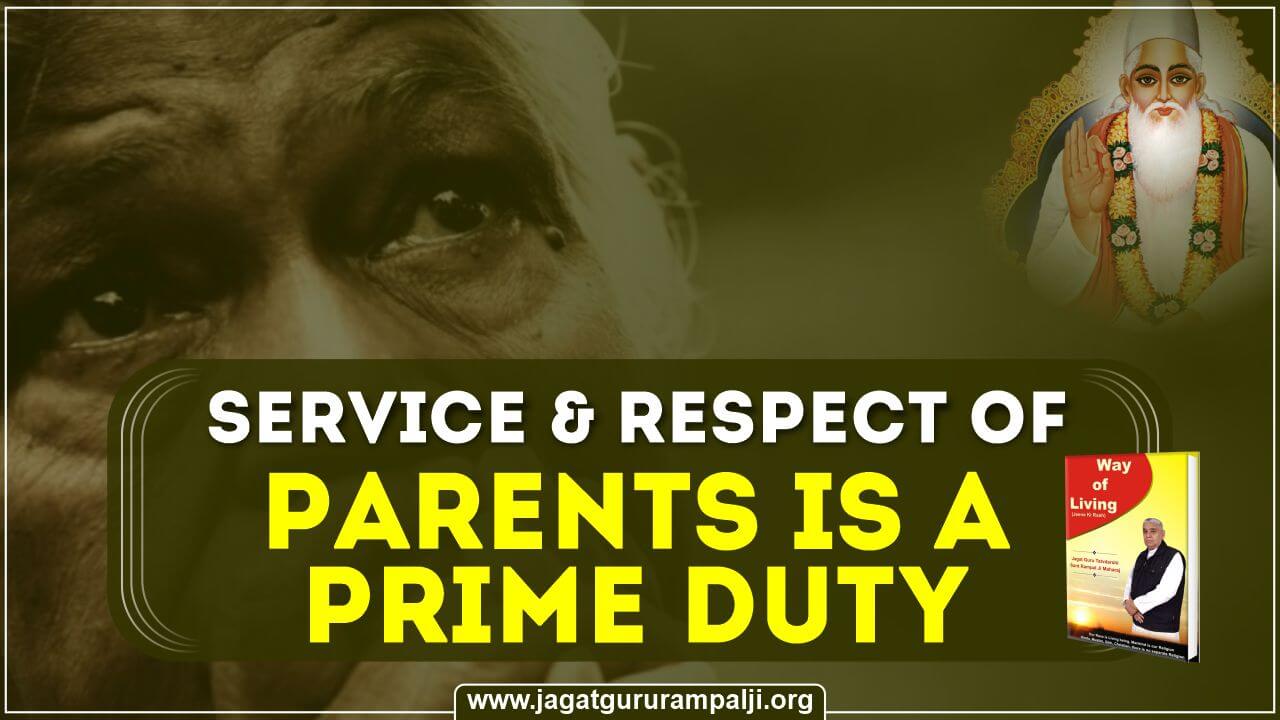 Every parent has a desire that – “My child should prosper. He should not earn disrepute in the society. He should be of a good character and obedient. He should serve us in our old age. Our daughter-in-law should follow our advice. She should keep our respect in the society. She should serve us in our old age. She should behave affectionately.” This code of conduct was at its zenith till Satyug, Treta and Dwaparyug. Everybody used to lead a happy life. In Kalyug, for some time everything was fine, but the situation currently is opposite. The author (Rampal Das) has the ambition to improve it. I also hope that by the grace of God, with the light of knowledge everything will become possible; it is happening as well and will happen in future too. My soul believes this.

A boy’s father died. At that time, he was 10-11 years old. His mother raised her only son. His mother gave him the love of both mother and father so that he does not feel the pain of the absence of his father. The boy on becoming young got addicted to alcohol and started going to a prostitute. He used to daily ask for money from his mother and spend it in vagrancy. One day, his mother did not have any money. In a drunken stupor, he beat his mother and went to the prostitute. That day, he did not have any money, so the prostitute said, “Get your mother’s heart.” He went back home. His mother was unconscious. He took her heart out with a knife and set forth. In the intoxicated state, he tripped over and fell down. A voice came from his mother’s heart, “Son! Did you get hurt?”

When the devil made from intoxication went to the prostitute with his mother’s heart, the prostitute said, “When you are not a well-wisher of your mother, then how can you be mine? Misguided by someone, you will kill me too. I wanted to get rid of you because you have become poor now, and you are of no use to me. Therefore, I had kept this condition thinking that you cannot take your mother’s heart out because she never used to deny anything to you. O devil! Go away from my sight.” Saying this, the prostitute shoved him out of her house and shut the door. That devil came home and started crying at his mother’s dead body. He said, “Mother! If possible, save me in the court of God too.” A voice came, “Son! Nothing has happened. I just want to see you happy.” At that very moment, the people of the city came. They reported it in the police station. The king sentenced him to death by hanging.

The king asked him his last wish before hanging him. The boy said, “Call some citizens. I want share my wrongdoing with everyone.” People of the city came. That boy confessed his crime and told, “I committed the aforesaid crime. Even in the last moments, my mother’s soul kept wishing for my well-being. Intoxication made me a devil. I polluted the society by visiting a prostitute. Take this advice from me. Nobody should commit the heinous sin that I committed by tormenting my mother. Even a wife cannot be as sympathetic as a mother, no matter how noble she is. A mother loves her son or daughter so much so that in winters when the child urinates, the mother herself lies down on the wet cold clothes and spreads dry sheet under the child. If the child is crying from hunger, she leaves her meal in the middle and first pacifies the child by breastfeeding him/her.