14. Teachings of Saints | Way of Living 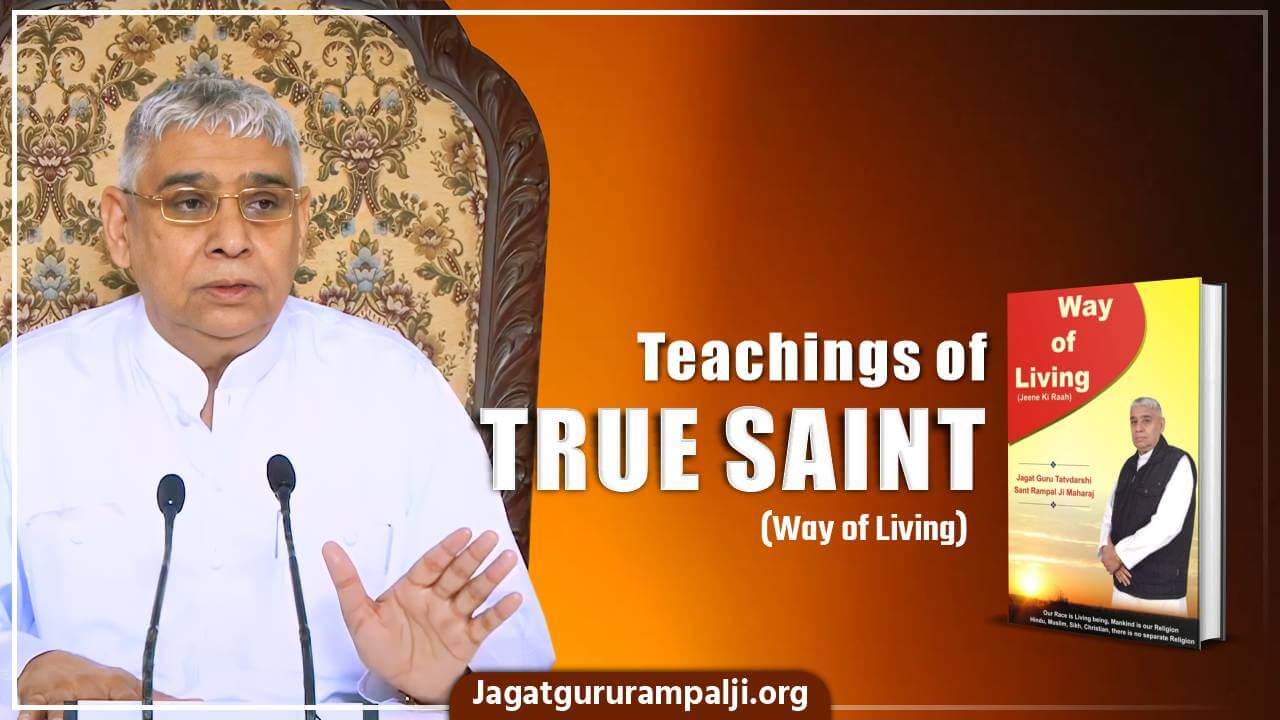 A villager went to Shri Nanak Dev ji for the first time. He saw that the saint was sitting in a pensive mood in solitude (he was remembering naam/mantra). That man said – ‘Satnaam-Waheguru’. Shri Nanak ji also replied. Then Nanak ji fed him and imparted knowledge. That man went away. One day, that man came again and said, “Maharaj Ji! You never seem to be happy. What is the reason?” Sant Nanak ji said: -

Meaning: - Sant Nanak ji said, “O Brother! Everything is perishable in this mortal world. Don’t know whose turn to go comes when. Therefore, how can a person, on whose head death is roaring, like dancing, singing, and banter? Only a foolish or an intoxicated person can enjoy in this evil world. Like, a person’s wife gave birth to a baby boy after ten years of their marriage. In the celebration of his birth, they made laddoos (sweets), played band and instruments, caused a frenzy. Next year, the child died on his birthday itself. Where on one hand, they were geared up to celebrate the birthday, they started weeping and wailing. The house became hell. Now celebrate!

On hearing this truth, that person started trembling, and said, “O Lord! Your statements are true, but do you never celebrate? Shri Nanak ji answered, “I do celebrate.”

Meaning: - When my disciples come to listen to satsang, I am delighted to see the congregation that everybody is engaged in bhakti. Nobody has wavered. When they depart after the Satsang, I become sad that some wrong-headed person might misguide them and draw them away from God. Shri Nanak ji said that unknowledgeable saints have made Fakiri, i.e. Bhakti difficult. They do not know about the path of complete salvation. They have become a guru to misguide. Through their sweet talks, they take my devotees into the Kaal’s trap. Hence, until all of them again come to Satsang, I remain worried. When all of them come, I become pleased. But we do not dance or sing; we feel it in our hearts. We never forget death. Kabir ji has said: -

Other example: - One day, a businessman went to the ashram of a saint. By the grace of the saint, he had a lot of benefit. That businessman took a big bag full of apples, oranges and bananas with him. The saint put them all in one basket in which other (prasaad) blessed fruit was kept. When the businessman went two days later, the basket was still full of fruit. The saint distributed some of the fruit to the devotees. Some devotees brought fruit Prasad; they put that into the basket. The businessman said to the saint, “Maharaj! Why do you not eat fruit?” The saint said, “I see death. Therefore, I cannot eat them.” The businessman asked, “Maharaj! When are you departing from the world?” The saint said, “I will die after forty years from today.” The businessman said, “O Maharaj! Everybody has to die anyway; then why fear? This does not make sense. Even a common man does not fear like this. What are you talking about?” The businessman came after two-three days and made similar statements. That city’s king was also that saint’s devotee. The saint said to the king that – “There is a Kirorimal businessman in your city. He has a sandalwood shop. Sentence him to death by hanging and schedule the date of hanging a month later on Chandani Chaudas (the fourteenth day of lunar fortnight). Make sure there is a basket full of fruit and a jug of (ser) one litre milk inside the cell of the businessman in the prison. Give him kheer, halwa, poori, badi and a vegetable dish to eat.” The king obeyed his order. Twenty days had passed since the businessman had been put in the prison. He had become weak. The saint went to the prison and met each and every prisoner. On seeing the businessman, the saint asked, “Where are you from? What is your name?” The businessman said, “O Maharaj, did you not recognise me. I am Kirorimal, the owner of the sandalwood shop.” The saint said, “Hey Kirorimal! How come you have become so weak? Do you not eat or drink anything? Hey! There is a basket full of fruit and a jug full of milk. There is halwa and kheer in the plate.” The businessman said, “O Maharaj! I have been sentenced to death. I swear that I am innocent. Save me, Maharaj. I have small children.” The saint said, “Brother, everybody has to die, then why fear. Eat, drink and enjoy.” The businessman took his hands out through the bars and held the saint’s feet. He said, “Save me, Maharaj! I am unable to eat or drink anything. I only see the Chandani Chaudas (fourteenth day of the lunar fortnight).” The saint said, “Businessman Kirorimal! Just as today you can see that your death is certain on Chandani Chaudas, likewise sadhu-saints see their Chandani Chaudas even if it is forty years later.

People like you, who are devoid of the spiritual knowledge, enjoy and have fun, and suddenly death takes you away. You are unable to do anything then. Whereas, I see the day of my death, which will come after forty years. Due to this, I can only eat in moderation. Enjoyment never enters my mind. I am always engrossed in the thoughts of God. Your eyes of knowledge have been blindfolded by ignorance. They are opened in Satsang, by which one gets the way of living. One attains salvation. The saint asked the king to release the businessman. The businessman took initiation and got his welfare done.