44. Attainment of Path of Bhakti from Satsang | Way of Living

Sant Nityanand’s childhood name was Nandlal. He was born in a Brahmin family. He was contemporary to Sant Garibdas ji (Village Chhudani, district Jhajjar) for some time. Sant Garibdas ji’s life span was from 1717-1778. At that time, Brahmins were given special respect. It was considered to be the highest caste. As a result of which, it was natural to be egotistic. Nandlal’s parents had died. At that time, he was 7-8 years old. His grandfather was working at a high position in the office of the Nawab of Narnaul. He was brought up by his maternal grandparents. After education, the grandfather got his grandson Nandlal appointed as a sub-collector in Narnaul. On one hand Brahmin caste, and on the other designation of a sub-collector; due to which, it was normal for him to be arrogant. The maternal grandparents had even married the sub-collector off. At a short distance from the mansion of the sub-collector, a Vaishnav Saint Shri Gumani Das ji was doing Satsang at one of his devotee’s house. He was a devotee of Shri Vishnu ji. All the saints always used to make use of the nectar-speech of God Kabir ji in their (satsangs) sermons. It was explained in the satsang that why a human life is attained, but because of not listening to satsang, a person destroys his/her precious human life in the worldly turmoils. Because of ignorance, a person has pride of wealth, position and caste. A person, who does not do bhakti, suffers in the body of a donkey, dog, ox etc. animals or birds in the next birth. Therefore, relinquishing pride, one should take initiation from a Complete Saint and get one’s welfare done. Otherwise, one will have to bear suffering heavier than a mountain.

Swami Gumani Das ji’s ashram was approximately one and a half kilometre away from Narnaul city. On hearing the sound of the satsang, the sub-collector took a chair and sat down on the roof of his house. He listened to the entire satsang. An intense desire to take intiation arose, but the pride of caste and position was disturbing him – “How much respect Brahmins have! Then I am a sub-collector. Ordinary people go to satsang. I will feel ashamed. How will I go in the ashram?” Finally, he decided one day that – “I will go to the ashram early in the morning. By the time other people will go, I would have returned after taking initiation.” After finishing the satsang, the Saint returned to his ashram. On getting up in the morning, he used to go for a walk for some time. One day, Nandlal ji mounted on a horse was going towards the ashram in the morning. Gumani Das ji was going for a walk on that same path. The saint had shaven his head. There was no cloth on his head. Nandlal ji being a Brahmin used to believe in superstitions. If while he was going for some auspicious work, a person with completely shaven head used to come in front of him, then Nandlal ji used to cancel his program. He was going to that ashram to take initiation. It was the best day of his life. He saw a man with completely shaven head ahead. Nandlal ji had a sense of foreboding and felt angry. He contemplated that I will not leave the opportunity of initiation today, but he had to also make the superstition ineffective. Therefore, he himself derived a solution that I will knock with my knuckles on this jinx’s head; the bad omen will automatically end. With this motive, he stopped his horse next to that person (Saint Gumani Das ji) and said, “Unfortunate person! Today alone you had to come before me with a completely shaven head. I was going to an ashram for the most supreme task of my life.” Saying this, he knocked with his knuckles on Gumani Das ji’s head and made his horse move towards the ashram. It is common for saints to experience such incidents. They do not pay a lot of attention. Saint Gumani Das ji did think that the person looked civilised and was appearing to be a high official and well-born, but acted like a cowboy. Nandlal went to the ashram. There he met disciples of the saint. Greetings were exchanged. He told the motive of his visit. He tied the horse to a tree and sat down on a sack laid near the seat of the saint. When Saint Gumani Das ji after his walk and taking a bath, came and sat down on his seat, he saw the horse. It did not take him long to understand. When Nandlal ji saw him, he hung his head in shame. The devotees of the ashram had told Gumani Das that the sub-collector has come to take initiation. Nandlal ji fell at the feet of the saint, and told the reason behind his hitting with his knuckles. Saint Gumani Das ji said, “O Devotee! When we go to buy a pitcher worth an anna from a potter, we repeatedly knock it to check if it is broken from anywhere. You have come to do a deal of your life, so if you have checked the Guru ji by knocking him, there is no sin in it.” Nandlal ji was even more impressed by the calm nature of the saint. He took initiation. Saint Gumani Das ji changed his name to Nityanand. When Nitanand ji found a way of living from the satsang, he uttered the following speech: - 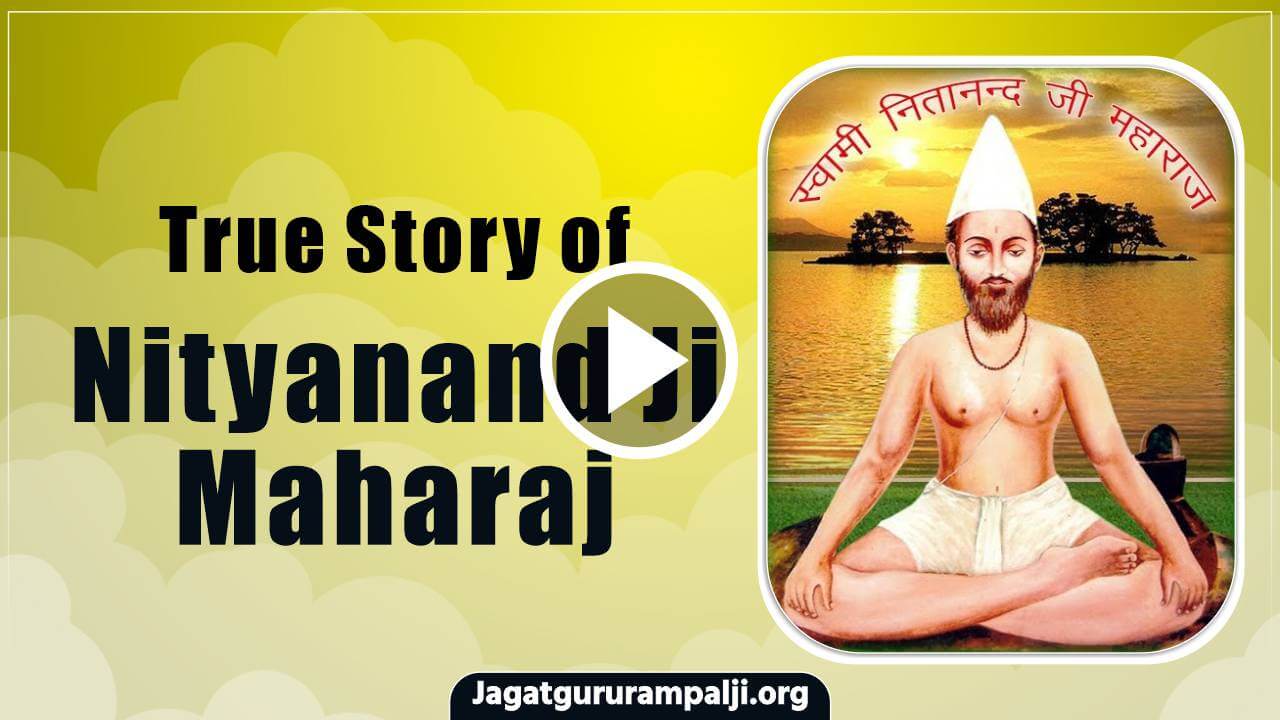 Then how subservient he became is evident from this speech: -

Meaning: - Until one gets to hear the words of Satsang, a human being out of ignorance keeps rotting in arrogance. When one gains knowledge, one realises that today I am a king, and after death I will become a donkey or a dog, then what will happen to the arrogance? Therefore, devotees tread on the path of bhakti by clearing that hindrance with knowledge, and achieve success. King Ravan of Sri Lanka did a lot of bhakti, but did not lose his arrogance. As a result of which, he got destroyed. Ravan was also a Brahmin. Nityanand ji was also a Brahmin. He became pure after listening to the satsang. Ravan did not get to listen to the satsang. Due to which, he wasted his life and also received an indelible stigma. Nityanand ji said, “Because I was born in a Brahmin family, I used to be fully arrogant about my caste. When I heard the satsang words of Guru ji Gumani Das ji, the fortress of ignorance of arrogance was decimated. My life became successful.”

(In reality, the hymn written above is of Kabir Ji. Nevertheless, we have to just gain knowledge.)

Sant Nityanand ji spent the last days of his life by doing bhakti on Jatela pond. Jatela pond is built on the boundary of various villages in Telsil Dadri of district Bhiwani. (On the boundary of villages Majra, Bigova, Baaas etc.) Sant Nityanand ji used to do bhakti of Shri Vishnu (Shri Krishna) ji. His Guru Shri Gumani Das ji was the disciple of Sant Shri Charan Das Vaishnav of Delhi. The readers may please read “Creation of Nature”. You will learn what category of salvation has Sant Nityanand ji attained. God Kabir ji had met Sant Garibdas ji. He told Sant Garibdas ji that a saint or a devotee, who is doing bhakti of any level, is respectable. But until one finds a Supreme Satguru (Complete Guru) who gives the true naam (mantra) of two words, neither that guru nor that disciple can attain salvation.

Shri Vishnu ji himself remains in birth-death, so a worshipper cannot attain the salvation that has been mentioned in Gita Chapter 15 Verse 4 that “after attaning Tatvgyan from a Tatvdarshi Saint, one should search for that supreme state of Supreme God, having gone where, a worshipper never returns to the world.” Only worship that Supreme God who has created the world-like tree. From whom, this world has expanded.

The Gurus (religious leaders) of Hindu society say that Shri Krishna ji narrated the knowledge of Gita to Arjun. Shri Krishna ji is considered to be the incarnation of Shri Vishnu ji, that is, he is considered to be Shri Vishnu ji himself. In Shrimadbhagavat Gita Chapter 4 Verse 5, the Speaker of Gita has stated that – “O Arjun! You and I have had several births. You do not know; I know. (This proves that Shri Vishnu ji is mortal. He takes birth and dies.) In Shri Devipuran, Third Skand, Vishnu ji is himself saying that I (Vishnu), Brahma, and Shankar take birth and die. We have birth (Aavirbhaav) and death (Tirobhaav). {It is clear from this that Shri Vishnu ji is not immortal. In Gita Chapter 2 Verse 17, Gita Chapter 15 Verse 17, the Immortal God has been said to be someone else other than the Speaker of the knowledge of Gita. Then in Gita Chapter 18 Verse 62, the Speaker of Gita has stated that “O Bharat! Go in the refuge of that Supreme God in every respect. Only by the grace of that Supreme God, you will attain supreme peace and eternal supreme abode.}

It is easily concluded from these pieces of evidence that Shri Nityanand ji did not attain the complete salvation mentioned in Gita. Kabir ji has said that: -

Meaning: - Whichever god-goddess, a devotee worships, that deity certainly gives relief to his/her devotee which for a common man is like a miracle. For example, if a person has served a constable, that is, has befriended a constable, then that constable makes his friend sit in a chair when his friend visits the police station. He offers him refreshments, which is not possible for an ordinary person. This is no less than a miracle for a common man. If somebody has acquaintances with the Superintendent of Police (S.P.), then he/she gets even more benefits. Similarly, if we step up, then if somebody is acquainted to a Chief Minister of a state, then whatever benefit he/she will attain would be a wonder for those of lower levels. Likewise, if one becomes aquainted with the Prime Minister of a country, then the benefits would know no bounds.

The author wants to say that if someone worships gods-goddesses, he/she also gets some benefits, but by the worship of the Complete/Supreme God, one gets all the benefits. If someone is under the aegis of the Prime Minister, then all the chief ministers, ministers and other officers and administrators of the country become his/her associates. Everbody assists him/her. There is no room for opposition. Similarly, all the gods and goddesses of the world become associates of a devotee who does bhakti of Complete God. They help him/her in every possible way. They do not cause any hindrance. If any ghost-manes, spirits, bhairav, Betaal even think of causing any harm to a devotee of Complete God, then the gods and goddesses themselves drive them away, and warn them that – “Do you know in whose refuge he/she is?” Then those wicked powers being frightened do not dare to cause any harm. If accidently a ghost or spirit causes any trouble to a devotee of Complete God, then the attendants of Complete/Supreme God capture that ghost/spirit and beating them up put them behind bars. God Kabir ji has said: -

Therefore, worship the Complete God. At present, nobody in the world apart from me (Rampal Das) has the true knowledge. Please come and by taking initiation, get your and your family’s welfare done.