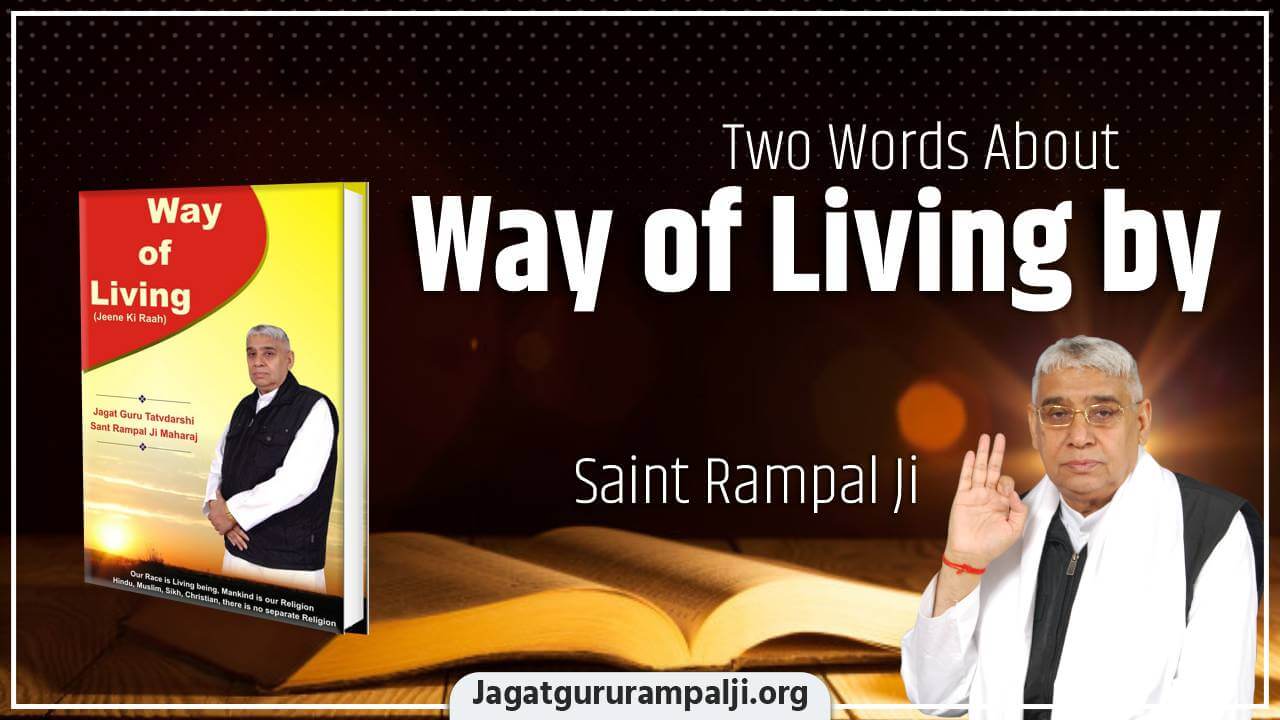 A person’s journey of life begins at birth. His/her destination is pre-determined. Here in this holy book, there is a detailed description of the path of a person’s journey of life. The goal of a human being (man/woman) is attainment of salvation. There are potholes and thorns of sins and good deeds in one’s path. On hearing this, you must be surprised that sins are indeed hindrances, but good deeds are giver of happiness; it is not right to call them potholes. Its brief description: -

Sins-like potholes and thorns: - A human life is attained to achieve salvation by doing scripture-based worship of God. The suffering of sinful deeds causes hindrance in bhakti. For example, due to sins, one suffers from a disease in the body, incurs loss in livestock and crop, and hence one’s debt increases. A person under debt remains worried day and night. He/she cannot do bhakti. After taking initiation from a Complete Satguru, Supreme God eliminates all the above-mentioned crises of that devotee. Then that devotee starts doing his/her religious practice with more devotion. His/her faith in God increases; becomes firm. But a devotee should be surrendered to God. Like, a faithful wife does not think of anyone other than her husband, even in her dreams, to fulfil her sexual desire, no matter how handsome the other person may be. Her husband makes every possible effort to provide her with all the comforts. He loves her exceptionally. Similarly, after taking initiation, a soul is united with God. Guru ji marries the soul off with God. If that human-bodied soul remains dedicated to her Supreme Husband/Master God like a faithful wife, that is, she does not wish for fulfilment of her desire by any other god/goddess, then her Supreme Husband/Master God sweeps away all the obstacles, the thorns of sinful deeds, from her path of life. That soul’s path of life becomes easy and free from obstacles. He/she easily reaches the destination. What does God do for that soul? Sant Garibdas ji has described it from the knowledge gained from Supreme God Kabir ji: -

Sins that are obstacles in the path of bhakti are destroyed by doing bhakti.

Therefore, after taking initiation from a Complete Guru, everybody, man-woman, children (after 3 years of age), and young-old, should definitely do bhakti.

Good deeds are also hindrances in the path of bhakti: -

As a result of the good deeds of previous life, one has wealth in the house, has all the comforts. Somebody gets a high position, which is a hindrance in bhakti. That comfort takes a person miles away from God. Such a comfort is also a hindrance in the path of life. It moves the destination of attainment of God further away.

If you try to narrate the tale of God to a rich and highly-ranked person, he will have no interest in it. On the other hand, discuss the topic of God with a person who is suffering from the blows of sinful deeds. Tell him that – ‘God removes all sufferings. You may worship God. See, such and such person from our village became happy by taking initiation from that Saint. He was also suffering like you.’ Then that distressed person starts doing bhakti. That misery became a blessing for him. How do we explain to a person who is happy? He has a sufficient stock of good deeds. That rich person, after consuming the fruits of his good deeds, becoming empty, and accumulating a goods-train load of sins, after death, hanging his head, will fearfully go to the court of God. He will get the lives of dog, donkey and pig. Contrary to this, a distressed and poor person after doing bhakti of God, by doing charity, will become happy in the current life. By saving oneself from sinful deeds, loading a goods train of virtuous deeds, enriched with the wealth of bhakti, one will fearlessly go to God’s court. God will embrace him. By granting salvation to that devotee, God will make him happy forever.

If a rich and highly-ranked happy person also starts doing bhakti, then his task is accomplished; there is no hindrance in salvation.

Question: - A gentleman said that – ‘I do not consume any intoxicating substance. I am away from all the vices. I consider others’ sisters and daughters as mine. I do not commit any sin. I do not need to do bhakti. I have seen such men and women going to satsang who used to commit all sorts of evil deeds, and had a bad reputation.

Answer: - Like, there is a two acre land. One acre land has been ploughed and cleared, that is, digging the weed, bushes and grass out, ploughing with a plough or tractor, it has been cleared up, but the seed hasn’t been sown.

Therefore, if you are free from defects/vices, then you will have to sow the seed of bhakti. Only then the field-like body of yours will prove beneficial.

Those, who used to perform wrongdoings, gained knowledge. On quitting the wrongdoings, if they do bhakti, then they have changed their way of life; they have cleared it. Their destination has come closer.

You will further read that a prostitute listened to the satsang of God Kabir and changed her way of life. Taking initiation, she started going to satsang. The people of the city did not use to like it. They started talking in whispers that – ‘Infamous women go to Kabir’s satsang. He is not a good saint. Only such men and women go to his satsang. Do not let your sister or daughter go there.’ On hearing these views of the people, some devotees also started speaking the language of the village people to Guru ji. Then Supreme God Kabir told that: -

Meaning: - If a devotee has leprosy and he has started doing bhakti, then the devotee society should not hate him. They should greet him like they do to the other devotees. They should respect him, encourage him. His life will become successful by doing bhakti and his disease will also get cured. Similarly, if a prostitute daughter or sister has thought of doing bhakti, of coming to the satsang, then she has developed faith in God. If she will listen to the teachings of satsang, she will quit her vice. Her welfare will be done. Vices will disappear from the society. If she will not even come to the satsang, then how will she come to know about her sinful deeds? Like, if a dirty cloth will not come in contact with soap and water, then how will it become clean? Therefore, if such infamous woman also does bhakti, then greet her also with special respect so that she does not hesitate to come to the satsang. If you will stop her, then you will incur sin. To know the story further, read “Tests of disciples by Kabir Ji”.

The same evidence is also in Shrimad Bhagavad Gita Chapter 9 Verse 30. It is written that even if someone is a very wicked person, but he has started doing bhakti of God with faith, then he should be considered equivalent to a Mahatma. He will be reformed after listening to the viewpoints of saints, and he will get his welfare done. Therefore, a human being after acquiring the refuge of a Guru should definitely do bhakti of God, auspicious deeds and charity.

Meaning: - God Kabir has explained that O Human being! This human life (man/woman) is obtained with great difficulty after eras. It is not obtained repeatedly. Do bhakti of God and perform auspicious deeds while you are in this body; otherwise, once this body finishes, you will not be able to attain the same state again, that is, will not be able to attain the human body. Like a leaf after detaching from a tree does not get reattached to the same branch.

Therefore, do not lose this opportunity of human life. Kabir Ji has then said that: -

Someone is healthy due to the auspicious and inauspicious deeds performed in the previous lives. Suddenly, he becomes ill and after spending lakhs of rupees on the treatment, dies. Someone is ill from birth. After suffering throughout life, he/she dies. Someone is poor. Someone is born rich. Someone has boys and girls, and someone does not have any children. Someone only has daughters and does not get a son even if he/she wishes. A human being bears all this as a result of the deeds done in the previous lives. Until one commences bhakti again, one continues to get what is already destined. When one starts doing bhakti according to the rules after taking initiation from a Complete Satguru, then due to an upsurge in the auspicious deeds, the period of suffering starts converting into happiness.