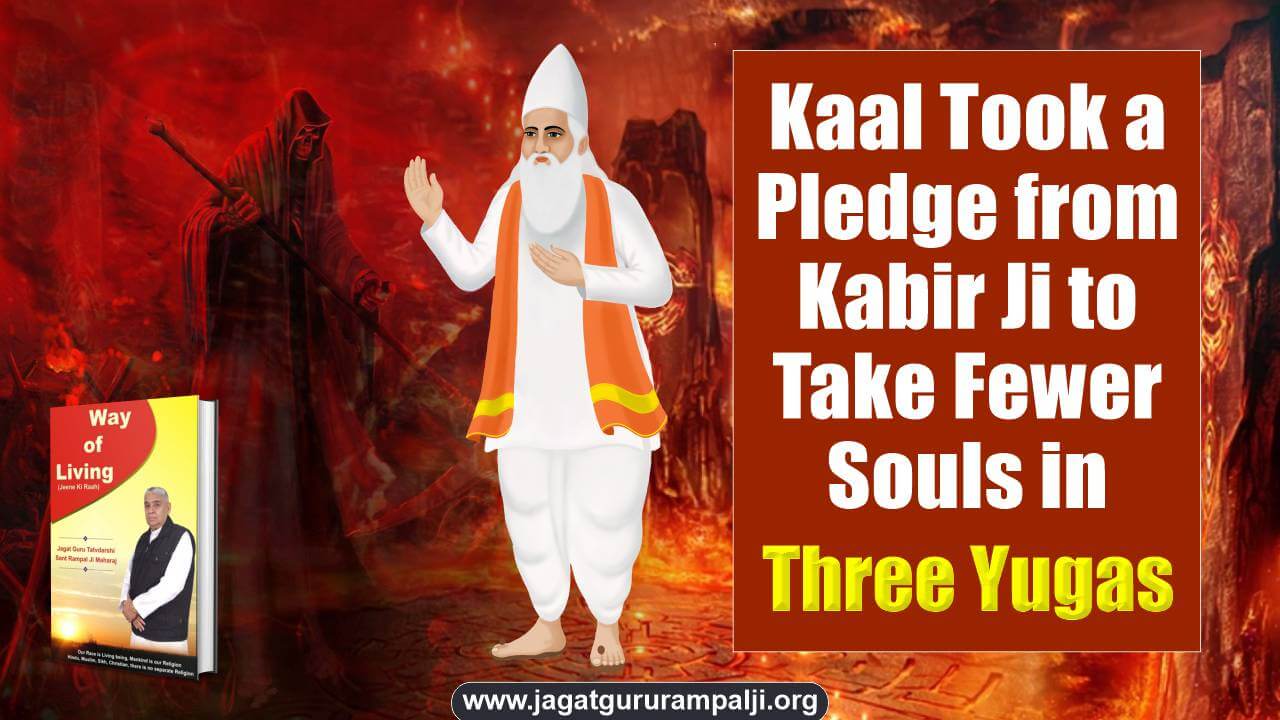 Question: - Who are the actual chief of the twelve Panths prevalent by the name of Kabir Ji, and who will commence the Thirteenth Panth?

Answer: - Like the redactor of Kabir Sagar, Swami Yuglanand (Bihari) ji, has expressed sorrow that the state of the Holy Texts of Kabir Ji has been deteriorated by tampering with them from time to time.

Example: - Supreme God Kabir in Jogjit form had a dispute with Kaal Brahm. It is present in “Swasamved Bodh” from Page 117 to 122 and in “Anurag Sagar” from Page 60 to 67.

Supreme God Kabir Ji in the guise of his son Jogjit appeared in Kaal’s First Brahmand, which is the twenty-first brahmand and where the Tapt Shila is built. Kaal Brahm had an altercation with Jogjit. Then, Kaal Brahm, being helpless, holding Jogjit’s feet asked for forgiveness, and after taking a pledge from him, asked for some relief.

Supreme God accepted all the demands and pledged to fulfil them. Then Kaal Brahm laughed and said, “O Jogjit! You may go to the world. When Kalyug will come, I will send my 12 messengers (Fake Satgurus) to the world. By the time 5505 years of Kalyug would have passed, I will get 12 Kabir Panths started by your (by the name of Kabir Ji) name through my messengers.” Kabir Ji in the guise of Jogjit had said to Kaal Brahm that – ‘In Kalyug, my name would be Kabir, and I will start a Panth by the name Kabir.’ Therefore, Kaal Jyoti Niranjan had said that – ‘If you will start one panth by the name Kabir, then I (Kaal) will start 12 Panths by the name Kabir. By misleading all the human beings, I will keep them entangled in my web. Apart from these, I will also start many other panths (sects) who will talk about Satlok, Sachkhand, but they will not have the true way of worship. As a result of which, the human beings will remain in my trap by reciting the wrong mantras in the hope of going to Satlok.’

Kaal Brahm had asked that – ‘When will you start your True Kabir Panth in Kalyug?’ Kabir Ji had stated that – ‘When 5505 (five thousand five hundred five) years of Kalyug would have passed, then I will start my True Thirteenth Kabir Panth.’

Kaal said – “Prior to that time, by imparting knowledge contrary to the scriptures, I will make everyone habitual to fake mantras and wrong way of worship by making everybody on the entire earth perform arbitrary way of worship abandoning the injunctions of the scriptures. When your thirteenth incarnation will come and start the True Kabir Panth, nobody will believe him; rather, people will quarrel with him.” Kabir Ji knew that when 5505 years of Kalyug would have passed (in 1997), a revolution of education will come. All the human beings will be made literate. At that time, my Das, by properly understanding all the religious scriptures, will show them to the human society. On seeing all the pieces of evidence with their own eyes, the educated human society by becoming familiar with the truth will immediately take initiation in my Thirteenth Panth, and the entire world will do bhakti by wholeheartedly accepting the way of worship and the true spiritual knowledge imparted by me. At that time, again there will be an environment like that of Satyayug. There will be no mutual malice, and nobody will commit theft, adultery, loot or fraud. Nobody will accumulate wealth. More importance will be given to bhakti. Like, at that time, that person would be considered great who would have excessive wealth, big business, and huge mansions, but after the commencement of the Thirteenth Panth, those people would be considered fools, and those who will do bhakti and will live in ordinary houses will be considered great, superior and respectable.

“For Evidence, Nectar-Speech From Different Chapters Of Holy Kabir Sagar”

Speech of Anurag Sagar from Page 62: -

Speech of Anurag Sagar from Page 63:

Speech of Anurag Sagar from Page 64:

Speech of Anurag Sagar from Page 65; Speech from line no. 3 from above:

Speech of Anurag Sagar from Page 64; Speech from line no. 6 from above:

Speech of Anurag Sagar from Page 64; Speech from line no. 7 from above:

Speech of Anurag Sagar from Page 64; Speech from line no. 17 from above:

Meaning: - (Speech no. 55 to 61) Supreme God Kabir Ji has stated that – ‘O Kaal! You have created a big illusion. You will inflict immense atrocities on the living beings in the three yugas (Satyug, Tretayug and Dwaparyug). As you are saying, you had made a request to me; I accepted it. You have deceived me, but when the fourth yug, Kalyug, will come, then I will send my ‘Ansh’, that is, I will send a soul who is recipient of my favour. O Kaal! He will eliminate all your traps, that is, wrong knowledge and way of worship based on ignorance, with Satya Shabd (true mantra) and true knowledge. At that time, the entire world will become initiated by taking initiation from that Saint of mine. Until that time comes, that is, until 5505 (five thousand five hundred five) years of Kalyug pass, Satyanaam, Mool Naam (Saar Shabd) and Mool Gyan (Tatvgyan = true spiritual knowledge) do not have to be revealed. But when 5505 years of Kalyug would have completed, then my knowledge will be discussed excessively in every home, and Satyanaam and Saar Shabd would be granted to all the initiates. This statement that I am making; these words of mine will prove to be true at the time when 5505 (five thousand five hundred five) years of Kalyug would have completed. When these many years of Kalyug would have passed, then all the human beings will become aware of that supreme place of Param Purush i.e. Satya Purush (Eternal God) about which it is mentioned in Gita Chapter 15 Verse 4 that – after finding a Tatvdarshi Saint, worshippers never return to the world. The Supreme God from whom the world-like tree has originated, that is, the Supreme God who has created the nature, worship that Supreme God.

The meaning of the above-mentioned speech is that at that time everybody will become completely aware of the place (Satyalok) of that Supreme God.

Meaning: - Supreme God Kabir Ji has told that all the one lakh eighty thousand (1, 80, 000) prophets from Baba Adam to Prophet Muhammad, and the ten incarnations as believed by the Hindus, were sent by Kaal. Among these ten incarnations, the main are Ram and Krishna. All these by glorifying Kaal and misleading all the living beings have consolidated the way of worship of Kaal. Jyoti Niranjan Kaal (Brahm) is their head.

Meaning: - Supreme God Kabir Ji has told that – O Dharmdas! I had also said this to Jyoti Niranjan, that is, to Kaal Brahm; now I am telling it to you too.

Translation of Swasamved Bodh Speech no. 66 to 74: - When five thousand five hundred five (5505) years of Kalyug would have passed, then a Great Man will come to emancipate the world. Whatever (Panths) sects would have been formed by then e.g. Hindu, Muslim etc, and whatever living beings there will be in the world, they by acquiring a human body, will take Satyanaam from that Great Man, and will attain salvation by the power of Satyanaam. All the other Panths (sects) will automatically, swiftly merge into that (Thirteenth) Panth, the Satya Kabir Panth (True Kabir Panth) started by that Great Man, just as different rivers while flowing freely automatically fall into an ocean. Nobody can stop them. In this way, all the panths will quickly merge into that Thirteenth Panth, and one Panth will be formed. But until the time of ‘Theek’ will come, that is, until five thousand five hundred five years of Kalyug will complete, till then this knowledge of Swasamved that I am uttering and you are writing will seem baseless.

When that predetermined time will come, at that time men and women by acquiring noble thoughts and virtuous conduct, abandoning deceit and useless cunningness will take my (Kabir Ji) refuge. To gain benefit from God, several Panths (religious communities) have formed from one religion “Mankind”. All these will again become one. All the Hans (devotees free from vices) souls by the power of Satyanaam will go to Satlok. The discussion of my spiritual knowledge will occur in every home. As a result of which, everyone’s ignorance will be dispelled. In Kalyug, after becoming one again, everybody will have a normal behaviour, that is, people will lead their life peacefully. Whether one is ‘Ugra’, that is, a dacoit, robber, butcher, or a ‘Shudra’, that is, a base person who commits any other wrongdoing, God will (bhavpeer) remove the worldly sufferings of all those who will do true bhakti. Everyone’s worldly sufferings will be eliminated by the true way of worship, and the founder of that Thirteenth (13th) Panth will look equally upon everyone, that is, he will not discriminate between people of lower and upper strata. He will Himself be Samrath Satya Kabir (Almighty True/Eternal Kabir). {Mm Sant Mujhe Jaan Mera Hi Swaroopam = Consider My Saint to be My Form Only}

Question: - Which is that Thirteenth Panth? Who is its founder?

Answer: - That Thirteenth Panth is the “Yatharth Sat Kabir” Panth. Its founder is Supreme God Kabir Ji Himself. At present, its Operator is His Slave Rampal Das son of Swami Ramdevanand ji Maharaj. (From the spiritual viewpoint, a Guru is considered to be the father who nurtures the soul.)

Evidence: - The devotees, who are associated with the Mahants of the family line of Sant Dharmdas ji, out of ignorance, have wrongly attempted to prove the people of the lineage of Dharmdas to be the Thirteenth Panth and its operator. If someone tries to put the cloth of an elephant over a bull and says – ‘Look, this cloth is of a bull’; wise men immediately understand that this is not the cloth of a bull. It belongs to an animal many times bigger than the bull. Though they may not be able to tell which animal it belongs to.