15. Journey After Marriage | Way of Living 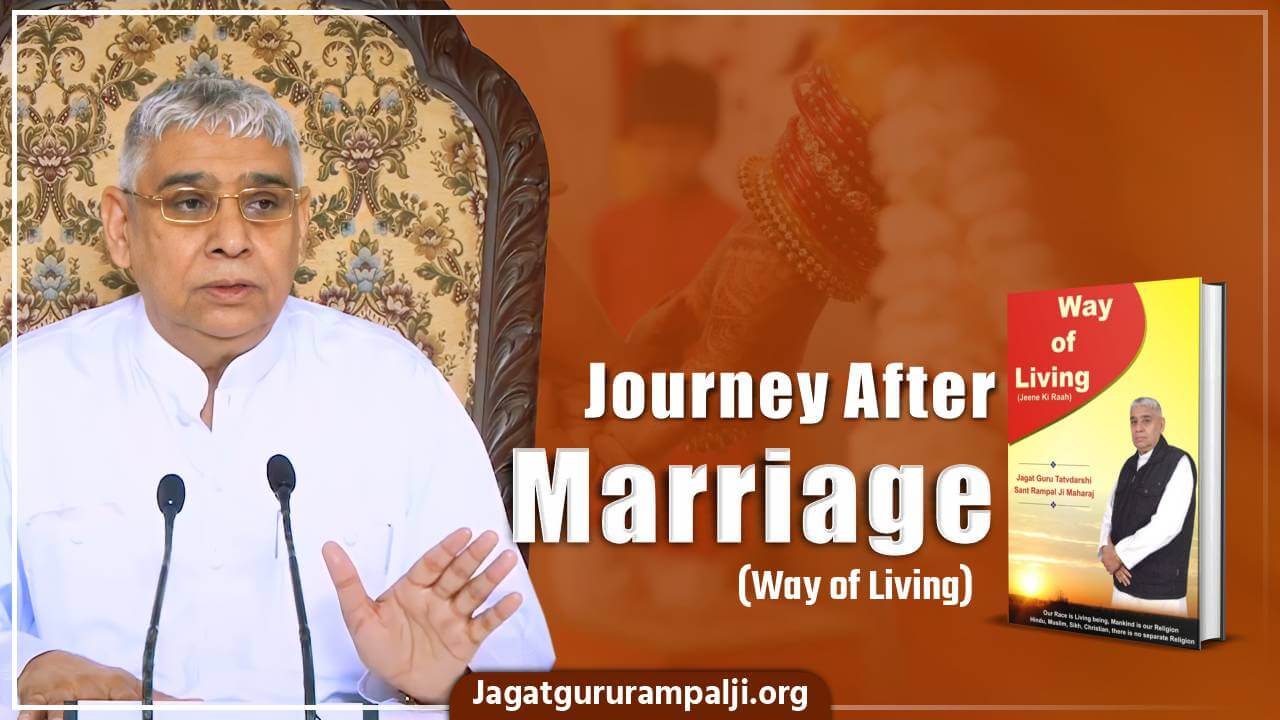 It is a duty of the husband and wife after marriage that they keep their faith on each other. The purport is that they both follow the rule of Jati and Sati. The husband should have absolute trust that – my wife can never surrender to another man no matter how handsome or rich he is. Likewise, the wife should have absolute trust that – my husband being impressed by another woman cannot have sexual relationship with her even if a nymph descends from heaven.

Story: - There was a young soldier. His wife was Sati i.e. loyal. He told this to his companions in the army. This news also reached the king’s minister Sher Khan (Muslim). He told it to the king and requested to investigate whether it is true or false. The king called an assembly and sent for that soldier Chaap Singh Chauhan. In the assembly, the king asked, “You are saying that your wife is loyal to you. She can never have sexual relationship with another man for any incentive.” Soldier Chaap Singh said, “This is hundred percent true.” The king said, “If it is found to be a lie, then?” The soldier said, “Then whatever punishment you will give, I will accept.”

Minister Sher Khan said, “King! I will personally take this test.” The king said, “Okay.” Chaap Singh said, “My wife cannot give a turban and a dagger which I received at the time of my wedding as the token of being married. If Sher Khan will bring them, I will consider my defeat. And tell about some mark on my wife’s body. I will accept that my wife has lost her fidelity.”

Sher Khan went to Chaap Singh’s town and said to an informer woman that there is a wife of a Soldier Chaap Singh who lives in this town. Make arrangements for me to have sexual relationship with her. I will give you a lot of money. That woman said, “It is not possible at any cost.” Then Sher Khan said, “Somehow bring the token of marriage, a turban and a dagger, which he got at the time of his marriage, from his house, even you can steal it and bring it. And if there is any mark near the private parts or thigh of Chaap Singh’s wife, Somvati, then find that out as well.” That woman disguising as Chaap Singh’s fake paternal aunt went as a guest to Somvati’s house. Chaap Singh’s paternal aunt had not come at or after Somvati’s marriage. Because of being ill, she could not even attend the wedding. This woman stayed there for many days. She saw Somvati having a bath. So, she went close to her and with the excuse of praising her beautiful body looked at each and every body part. Somvati had a big mole near her private parts. After seeing this mark, the informer woman stole the turban and the dagger and gave it to Minister Sher Khan and told him about the mole. Sher Khan told the king that – “I have had sexual relationship with her. She has a black mole on her thigh. A loyal wife never gives this token of marriage to anyone. In my love and in greed of money, she gave these to me.”

The king called an assembly. He sent for Chaap Singh. He said that – “Whose turban and dagger is this?” Chaap Singh looked at them carefully and accepted that – “They are mine.” Sher Khan said, “Shall I tell more? Listen! Your wife has a black mole on her right thigh near her private parts.” Chaap Singh said, “This is also true, but my wife cannot lose her fidelity.” The king said, “You are still repeating the same thing. You are a liar. You will be hanged to death in a month’s time from today. If you have any last wish, then tell us.” Chaap Singh said, “I want to meet my wife.” The king granted permission. Chaap Singh went to his wife. He berated her for cheating him, and told that – “I will be hanged on that day because of you.” Somvati told him that – “A woman had come by your paternal aunt’s name. She saw the mark on my body and stole the turban and the dagger.” Chaap Singh told her that the Minister Sher Khan had come. He has planned this entire conspiracy. Chaap Singh returned. A week before the day of hanging, Somvati went as a dancer to the king’s city, and requested the king to give her permission to show her dance. The king gave permission. All the members of the assembly were present. Minister Sher Khan was also present. The king became very pleased with the dance of the dancer, and said to her, “Ask for whatever you want. I am very pleased with you.” The dancer said, “Give me your word, then I will ask.” The king said, “Ask for anything other than the kingdom. I give you my word.”

The dancer said, “My thief is in your assembly. He has stolen things from my house. His name is Minsiter Sher Khan. He should be hanged to death.” The king asked Sher Khan, “Tell Sher Khan! What is the truth?” Sher Khan said, “O Lord! I had not even seen this woman’s face ever before.”

Somvati said that –“If you had not seen my face, then from whose house you brought this turban and dagger. I am the loyal wife of that Chaap Singh, who is being hanged due to your lie.” Chaap Singh was summoned. The king gave half of the kingdom to Chaap Singh and forgave him, and Minister Sher Khan was hanged to death. Blessed are such daughters whom India is proud of.

Meaning: - Kabir Ji has told that – Garibdas! If in a city or a country there is no (tura) horse that runs fast and jumps high, and the citizens are not (randhir) valiant, and in a country or city there is no (padmani) loyal wife, then it is a very big (takseer) mistake, that is, it is a shortcoming. It is essential to have both, such chaste men and women.

After marriage, some girls adorn themselves heavily in their in-laws’ place. They walk through streets with all the adornments and behave strangely. Wearing gaudy and bright clothes that look awkward, they go to the bazaar or to the fields or to the tap or well to fetch water. What is their motive? It is clear that, apart from their husbands, they want to attract other men towards them. They want to exhibit their beauty and splendour, which is not a characteristic of a good daughter or daughter-in-law. If we say that they do so to please their husbands, then it would have been better had they remained confined to their homes, but such characteristics are signs of a defect in one’s mind.

One should wear simple clothes, whether they are expensive or cheap. A sister, daughter or daughter-in-law’s vision should remain till 12 feet ahead. While walking, sitting, getting up, one should keep this in mind that one does not perform any such action that incites anyone. A wrong behaviour of a woman increases the courage of vagabonds. They harass them. It is uncivilised and arousing if a woman laughs flirtatiously while talking. It is a social evil. Just as a sister, daughter or daughter-in-law i.e. a woman behaves with her relatives, her behaviour should be the same outside the home as well. Civilised society praises such a woman. Her example is cited to other youths. If petrol does not get a spark, it does not become an explosive.

On the contrary, performing activities as mentioned above is like setting fire to the society. This statement is applicable both to young women and men.

Youth is like dynamite. If a spark strikes it, it causes complete destruction. If a spark does not strike it, it remains safe for years.

Every man wants that – My daughter, sister and daughter-in-law should be of good character. Nobody in the village or city should point a finger on our family.
When we look at a young woman and wrong thoughts arise in mind, then immediately we should think that if someone develops wrong thoughts about our daughter, sister or daughter-in-law, and with the aim of a wrongdoing, behaves awkwardly (expresses his wicked views in a satire, makes wrong gestures, makes flirtatious movements with eyes, gives side glances; behaves in this indecent manner), then how will we feel? The answer is clear- we will break his leg. Those, who are weak, will sit in solitude and cry. At that time, reflect that: -

Instigators of sexual harassment - films in which fake, fictitious stories and flirtatious gestures are shown. On seeing them, young children start imitating them and become shameless. Whatever activities are shown in the film can neither be performed at home, nor on the street, nor in the civilised society. Then what is the motive behind watching them? Nothing. The only excuse is entertainment. The same entertainment is the root cause of the destruction of the society. My (Rampal Das’s) followers do not watch films at all.

Vulgar songs, film songs, dramas and obscene discussions which loafer youths do, in their company good youths also get inspired and start doing nonsense. Supreme God Kabir has stated that: -

Meaning: - Supreme God Kabir has explained that either sing (katha=talk about) the glory of God or if there is discussion (katha) of God going on somewhere, then listen to it. Never listen to sexual i.e. obscene discussion. Kabir ji has given this (vichaar) viewpoint.