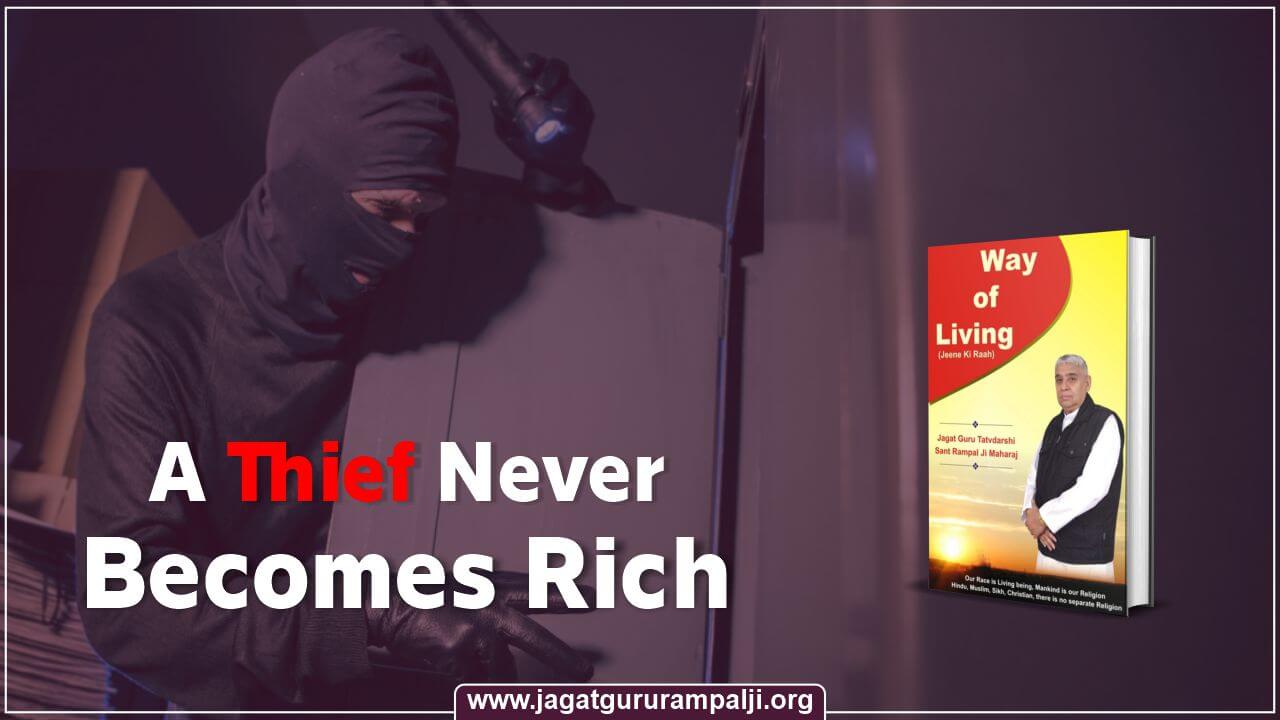 According to His rule, Supreme God Kabir used to reside in an ashram in a jungle outside a city. He used to stay in the ashram for a few days and deliver (Satsang) spiritual discourses. Then he used to set off to roam around. A Jaat farmer was his disciple who had become disciple only a few months ago. The farmer was poor. He had one ox. He used to use that ox and do farming with the cooperation of another farmer. Borrowing someone else’s ox for two days, he used to plough his field with the two oxen. Then for two days, the other farmer used to borrow his ox and joining it with his own ox used to plough his field. The farmer used to tie the ox in the courtyard of his mud house. One night, a thief stole the ox of that farmer. When the farmer saw that the ox has been stolen, he went to the ashram in the morning. He shared his sorrow with Gurudev ji. Gurudev said, “Son! Have faith in God. Continue doing charity, meritorious deeds and bhakti. God will give you two oxen. He who has stolen the ox has incurred sin.” By the grace of God, it rained well. The devotee farmer had quadruple crop yields. The devotee farmer bought two oxen and fed them well. The oxen became strong like bulls. His oxens were a topic of discussion in the village. A year later, that same thief came in that area to commit a theft, but he did not get any opportunity. He thought that – “Let me go to that man’s house whose ox I had stolen. He might have brought another ox.” When he went there, he saw that two strong oxen were tied there. The thief stole them both. When the farmer woke up, he saw that both the oxen have been stolen. He told it to his Guru ji. Guru ji said, “Son! God will give you four oxen. A thief can never become rich. He only accumulates sins.” By the grace of God and blessing of Gurudev, rain made all farmers prosperous. The devotee farmer had sufficient land, but because of shortage of rain, he used to do farming in a small area. It rained well. He bought two oxen and took two oxen on loan, and did farming in a bigger area. He also hired a ploughman. Within a year, he paid back all the debt too. He now had four oxen, stout like bulls and sturdy. He also built a solid house. The thief went there after two years and initially went to see the state of that same farmer. The thief saw that four stout oxen were sitting there, and the thief only had two days’ worth of flour left at home. He had become poorer. The thief woke the farmer up from his sleep at night. The farmer said, “Who are you?” The thief said, “I am that thief who had stolen your three oxen.” The farmer said, “Brother! Do not interrupt my sleep. Do your work. God is doing His work. Let me sleep.” The thief held his feet, and said, “O Righteous Man! I cannot commit theft now. Tell me one thing, your thief is standing in front of you; you are not even catching me. O brother! I stole your one ox; the next year you had two sturdy oxen tied in your courtyard. I even stole those two oxen. Today two years later, you have four strong oxen tied here. I have been completely ruined. My children are also starving. Whether you punish me or forgive me, tell me the secret of your progress. Even I am a jaat farmer. I also have a land. Still I am extremely poor.” The devotee farmer said to him, “Take a bath and have food.” The thief did the same. Then the devotee took that thief to the ashram and narrated the entire incident to Guru ji. Gurudev edified the thief. The devotee farmer kept the thief at his home for seven to eight days, and took him daily to Guru ji and made him listen to satsang. The thief took initiation. Guru ji said, “Devotee son! Lend one ox to the new devotee. He will do farming and return your money.” The devotee farmer said, “Alright, Guru ji.” The devotee farmer lent one ox to the new devotee. The new devotee used to come to the satsang every month. He got his entire family initiated. Within two years, his financial situation improved. The thief devotee came to the farmer devotee’s house and brought along with him one ox and the money of the previous three oxen he had stolen. His children were also with him. Giving all the money to the farmer devotee, the thief devotee said, “Please forgive me. Even my seven generations cannot repay your favour.” The farmer devotee said, “O brother! This is all Guruji’s grace. His words have come true. Now you may give all this money as donation to Guruji. He has already given me a lot more money than what the oxens were worth. I do not need this money.” Both the devotees went to Guru ji, and kept the entire donation money at his feet. Guru ji spent it on communal meals and delivering satsang. Therefore, money earned in a wrong way is taken away. A devotee always prospers.

“Sanskar (impressions of good and bad deeds) spread like a communicable disease.”

Good and bad instincts spread like communicable diseases. Like, the seeds sowed from a devotee’s hands have bhakti instincts in them. Those who eat those grains also get inspired to do bhakti.

If a ploughman who consumes intoxicants or who while ruminating on some other thoughts in the mind sows seeds, then those thoughts also enter those seeds, which then influence the person who eats them.

Example: - A sister had taken inititaiton from a Guru. Guru ji came to her house along with a disciple. That woman’s sister also arrived at her house the same day because of some work. That lady’s son-in-law had passed away. Her daughter had young children. The lady was very worried. Thoughts were arising in her mind at short intervals that – “How will my daughter sustain herself? My daughter’s life is ruined. One cannot rely on brother-in-laws. Who will raise the children? O God! What has happened? Don’t know sin of which birth has come to the fore?” When the disciple sister started preparing food, her sister started helping her. Majority of the food was prepared by that sister whose son-in-law had died. After having food, the saint and the disciple went to bed. In the morning, the disciple said to Gurudev, “O Gurudev! Last night, my mind remained very distressed in the sleep. As if, my son-in-law has died. My daughter has young children. I was very much worried about them. What will happen to them? How will they sustain themselves?” Guruji asked his female disciple, “Daughter! Who prepared the dinner last night?” She replied, “My younger sister has come. She had prepared it.” The saint asked, “Does she have any grief?” The female disciple replied, “O Gurudev! Her grief is enormous. Her daughter has young children. Her son-in-law has passed away. My sister remains engrossed in this worry the whole day. She repeatedly says, “What will happen to my daughter? How will she raise the children?”

Guru ji said to the disciple, “That daughter’s thoughts entered the food and influenced the person who ate it. Even I had the same tension the whole night. Similarly, if food is prepared while doing bhakti, recitation of mantras or Aarti or contemplation of the speeches of the saints, then the impressions of those good deeds inspire good things in the person who eats it. One’s interest in bhakti increases. If a ploughman sows seeds while singing songs or a woman prepares food while singing songs, then those impressions enter the food. The person who eats it is also inspired to behave nonsensically like that. Its result is being seen currently (around 1997). More people are engaged in wrongdoings than good deeds.

If the number of those who contemplate on the speeches of saints, read holy books and recite prayer and mantra will rise, the environment will become devotional. Devotee like emotions will arise in every individual’s heart. To build up that environment, Aarti, Ramaeni and Nitya-Niyam should be played in every home. Taking initiation from the Guru, everybody should recite mantra (naam) so that the elements of devotional thoughts will increase in the environment and the thoughts of wrong deeds will rise above. Consider the devotional deeds to be oxygen and bad thoughts to be carbon dioxide. We will have to turn on a lot of cylinders of oxygen-like devotional deeds, that is, we will have to do numerous Paaths (recitation of a Holy Book) of ‘Sadgranth Sahib’ and we will have to the three times of ‘Sandhya’ (daily prayer). We will have to mentally recite mantra. If the number of those who do bhakti will increase, the thoughts of bhakti will spread more on the earth, by which everyone will experience peace in their mind. When we used to go to someone’s house to deliver satsang, on the first day, our mind also used to get disturbed. Then every devotee used to do their respective Ramaemi, morning’s Nitya-Niyam and evening’s Aarti, and everyone used to recite mantra; I used to deliver Satsang, then the bad thoughts of that house used to get dispelled. Because of abundance of good deeds, the mind used to calm down. When after doing satsang or Paath (recitation of a Holy Book) we used to move on to the next village, the whole family used to cry. They used to get a lot of peace in the company of the saint and the devotees. The effect of those good deeds used to remain for months. If after taking (naam) mantra, the members of the family start doing the (Sandhya) prayers of the three times and recitation of mantra daily, then that peace is maintained constantly.

When a person who smokes tobacco in beedi or hukka sows seeds, the subtle elements of tobacco also enter the grain. A person who consumes that grain also gets inspired to consume tobacco. Due to which, consumption of intoxicants is increasing rapidly amongst the youth. Until one is a child, one does not consume tobacco due to the fear of one’s father, paternal uncles, or grandfather, but as soon as one becomes young, those tendencies become strong and one soon becomes habitual of consuming intoxicants. My aim is to eradicate intoxication and all other vices from the human society and establish heaven on earth. I want to see the words uttered by God Kabir come true. This invaluable task can only become successful by His inspiration and power. This Das and my followers are working hard with a true intention for the success of this mission. We are fully hopeful of success.