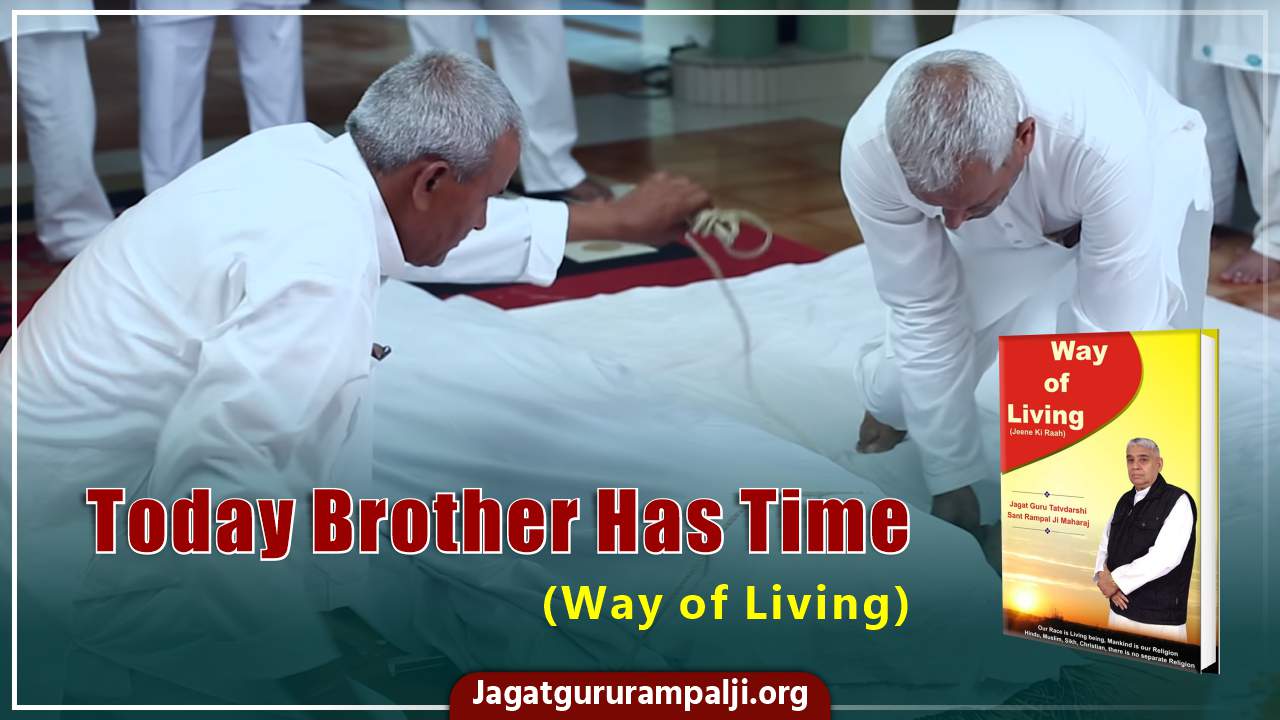 A devotee started going to satsang. He took initiation, listened to the spiritual knowledge and started doing bhakti. He requested his friend as well to come to satsang and do bhakti, but his friend did not agree. He used to say – “I am very busy in my work (do not have free time). I have small children. I have to raise them as well. If leaving my work, I will start going to the satsang, my business will get ruined.”

Whenever that devotee, who used to go to satsang, asked his friend to come along with him to satsang, he said the same thing that – “I don’t have time.” A year later, that friend died. His relatives and townspeople were carrying his dead body. Hundreds of people from the neighbourhood joined them. All of them were saying –“Ram naam sat hai, sat bole gat hai.” (Ram’s name is true, one who says this attains salvation.)

The devotee was saying – “Ram naam sat hai, parantu aaj bhai ko fursat hai” (Ram’s name is true, but today brother has time.) The people of the town were saying – “Sat bole gat hai”; the devotee was saying – “Aaj bhai ko fursat hai. (Today brother has time.)” Other people said to that devotee, “Do not say like this. The members of his family will get upset.” The devotee said, “I will definitely say this. I had requested this fool with folded hands that come to satsang; do some bhakti. He used to say – “I do not have free time.” Now he permanently has free time. He has even left behind his small children, giving excuse of raising whom, he remained away from God. If he had done bhakti, he would not have gone empty-handed. He would have taken some wealth of bhakti with him. God rears the children. God also increases the age of a devotee who does bhakti.” Devotees do bhakti with this thought. Leaving their work, they go to satsang.

Devotees contemplate that – God forbid, if we die, then who will do our work? Let us believe that we have died. We have died for three days. Go to satsang with this viewpoint. Consider yourself to be dead and go to satsang. As such, no work of a devotee of God can go wrong. Nonetheless, let us believe that some of our work went wrong in our absence. We can still set it right on going back after three days. If we actually die, our work is permanently ruined. Then we can never come back to set it right. This state is called – to die while alive.

Translation of the remaining speech: -

Translation: - In Shrimad bhagavat Gita Chapter 15 Verse 4, it is said that after gaining Tatvgyan, one should search for that superme state of Supreme God, having gone where, worshippers never return to the world, that is, they do not have rebirth. They do not acquire a body again. This speech of Sukshm Ved clarifies this very thing that one can go to that supreme abode after crossing the twelfth (12th) door. To date, all the sages and great-sages, saints, mandleshwars used to only tell 10 doors. But Supreme God Kabir has Himself told about his True Place and the true path to attain His place. He has told about the 12th door. This also clarifies that the bhakti of all the previous sages, saints and sects till now (year 2012) was up to Kaal Brahm. As a result of which, the cycle of birth and death continued.

Translation: - In the absence of Tatvgyan (true spiritual knowledge), because of not getting the path to complete salvation, sometimes we went to (Dojakh) hell, sometimes to (Bahisht) heaven, and sometimes we enjoyed in the life of a King. Even if this human being is given the kingdom of the three worlds, still he does not get contented.

Example: - If someone becomes a Sarpanch (Head) of a village, he wishes that he would rejoice if he becomes an MLA. An MLA wishes that if I become a minister then it would be remarkable. On becoming a minister, he wishes that if I become a chief minister then I will have complete supremacy. It would be extraordinarily delightful. I will have command over the entire state. After becoming a chief minister, a strong desire arises that if I become the prime minister then my life would be successful. By then, one dies. Then on becoming a donkey, he would be bearing the blows of stick of a porter. Therefore, it has been explained in Tatvgyan that one wasted the entire life in the maze of heaven and hell built by Kaal Brahm and in the attainment of a kingdom or throne. He did not get contentment anywhere. This mind is such a eunuch.

There was a king of Balakh City named Abraham Sultan Adham. He was a very virtuous devotee in his previous life. But in his current life, lost in luxuries, he had forgotten God. He was engrossed in the splendour of the kingdom and enjoying in the palaces. One day, God came from Satyalok and guising as a traveller, went to the King’s palace, and said, “O Inn-owner! Give me a room on rent. Tell me the price. I have to spend the night. The king said, “O innocent traveller! Does it seem to be an inn to you? I am a king, and this is my palace. God in traveller’s form said, “Who used to live in this palace before you?” The king said, “My father, grandfather and great-grandfather used to live here.” God in the traveller form said, “For how long will you live in this palace?” The king said, “One day I will also go leaving these behind.” God said, “If it is not an inn, then what is it? It is an inn. Just as your father-grandfather left this world, one day you will also depart; therefore, I have addressed these palaces as an inn.” The king became aware of the reality. Relinquishing the desire of this world, he got his welfare done. He took initiation to attain the ever-lasting happiness and the eternal life, and did bhakti throughout his life. He made his human life successful.

Translation: - If one finds a Tatvdarshi Saint Satguru, then imparting the aforesaid knowledge, and eliminating the desire for all the objects and positions of Kaal Brahm’s Lok, “Pad mil padae samaana” – in this the meaning of one ‘Pad’ is ‘Way’, that is, scripture-based way of worship; the meaning of second ‘Pad’ is ‘Param Pad’, that is, ‘(supreme) Position’; the Satguru by instructing the scripture-based way of worship makes one attain that supreme position (place) of Supreme God, having gone where, worshippers never return to this world. O devotee! Let me send you to that place which is a primordial and eternal place, that is, it is the ever-lasting supreme abode mentioned in Gita Chapter 18 Verse 62 where there is supreme peace.

Translation: - In that eternal supreme abode, there is supreme peace and excessive happiness. Four types of salvation are considered to be present in Kaal Brahm’s Lok; having attained which a worshipper considers himself to be blessed. But they are not permanent. After some time, on exhaustion of virtues, one then bears hardships in the lives of 84 lakh types of living beings. But the bliss of the four salvations will remain forever in Satyalok. Maya will be your maid.

Sant Garibdas ji has told that after going to Amar Lok (Eternal Place), a living being becomes fearless, and one will find that Immortal (Ram) God in that Eternal Supreme Abode. Therefore, for complete salvation, one should perform scripture-based worship by which one can go to that God.

It has become clear from the above-mentioned speech and the previously mentioned description that Shri Brahma, Shri Vishnu, Shri Shiv and their father Kaal Brahm, that is, Kshar Purush and Akshar Purush all Rams i.e. gods are mortal. Only Param Akshar Brahm is Immortal Ram, that is, God. Only by the bhakti of this Supreme God, one will attain supreme peace and eternal supreme abode i.e. complete salvation, where the bliss of the four salvations will remain forever. Maya, that is, all the joys and comforts remain present as a servant of the worshipper. It is stated in Sukshm Ved that :-

Meaning: - All the comforts are obtained from wealth. That wealth is an automatic by-product (by-product is something which is certainly obtained eventhough the aim is not to obtain it) of the bhakti of a saint or a devotee who does scripture-based bhakti. Like, one who has sown the wheat crop aims to obtain wheat, but the chaff/fodder is also certainly obtained. Fodder or chaff is the by-product of wheat crop. Similarly, one who does true worship automatically gets wealth. The worshipper uses it. It stays at his feet, that is, there is no shortage of wealth; rather he has more than is needed. By the bhakti of Supreme God, devotees, saints enjoy the joys of (Maya) wealth as well as attain complete salvation.

Let us take the topic further that a person in a human body must remember his/her aim. By doing bhakti, they should get their welfare done. It is written in Sukshm Ved that: - (Raag Asavari Hymn no. 71)

Meaning: - Like, two businessmen went far away to a city to do a business, and they took 5 lakh rupees each as capital. One made good use of his money. He took a room on rent in an inn or a hotel. He bought material and sold it at a higher price. By which, he earned extra 20 lakh rupees. Within two years, he returned home. Everybody praised him and he became wealthy. 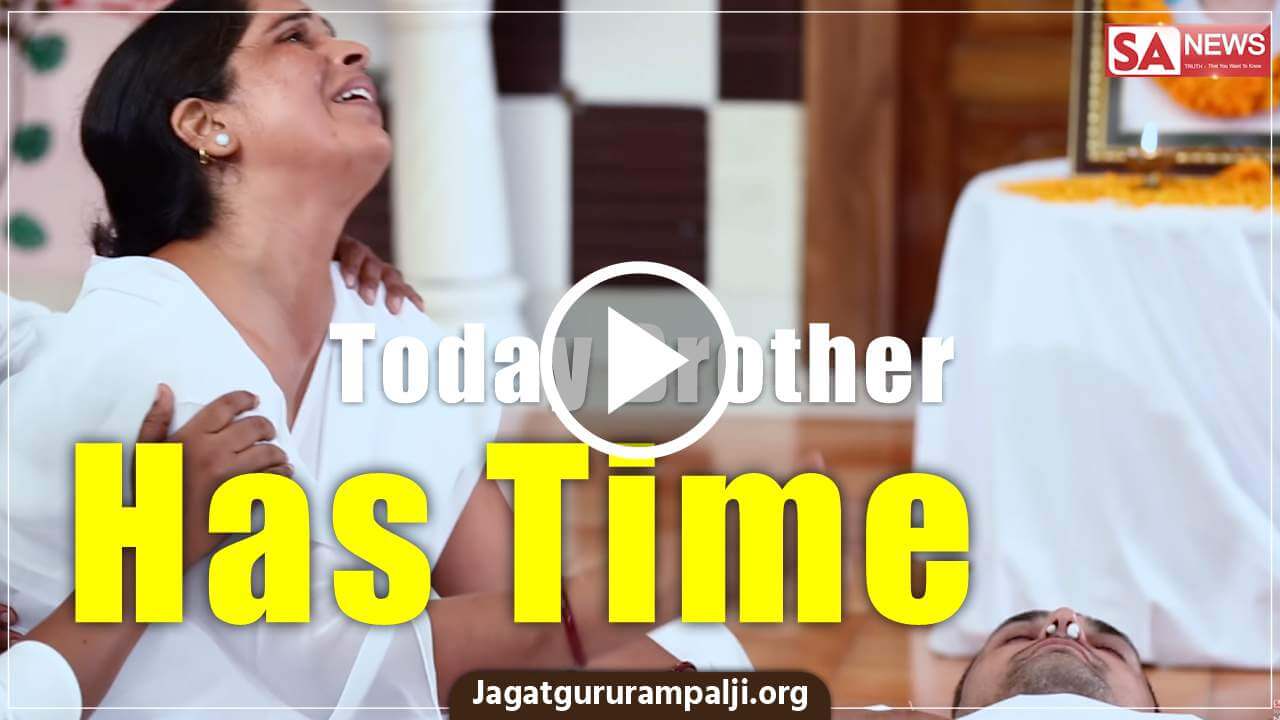 The other one also took a room on rent in a hotel or inn. He started drinking alcohol, watched prostitutes’ dance, ate and slept. He spent his entire capital of 5 lakh rupees. When he returned home, he was in debt. The person from whom he had borrowed 5 lakh rupees before going away asked for his money. As he was unable to pay it back, that person kept him as a labourer under him and recovered his 5 lakh rupees from him. The gist of the aforesaid speech is that all the living beings in the three worlds (Heaven, Nether World and Earth) have come to do their business of the name of Ram (God). Someone has earned twofold, threefold or fourfold wealth, that is, by taking initiation from a complete saint have increased the wealth of life-breaths, which is the capital, by doing true bhakti. Another person, who did not do bhakti, and relinquishing the injunctions of the scriptures performed arbitrary practice or did bhakti by taking initiation from an unauthorised person, does not get any benefit. This is evident in Holy Gita Chapter 16 Verses 23-24. Due to which, he also ruined the life-breaths-like capital of his human life because of not doing true bhakti.

← 3. Dialogue between Sage Markandey and an Apsara (Celestial Nymph)       5. Other description of harm caused by not doing Worship | Way of Living →