25. Even Donkeys and Horses Loathe Tobacco | Way of Living 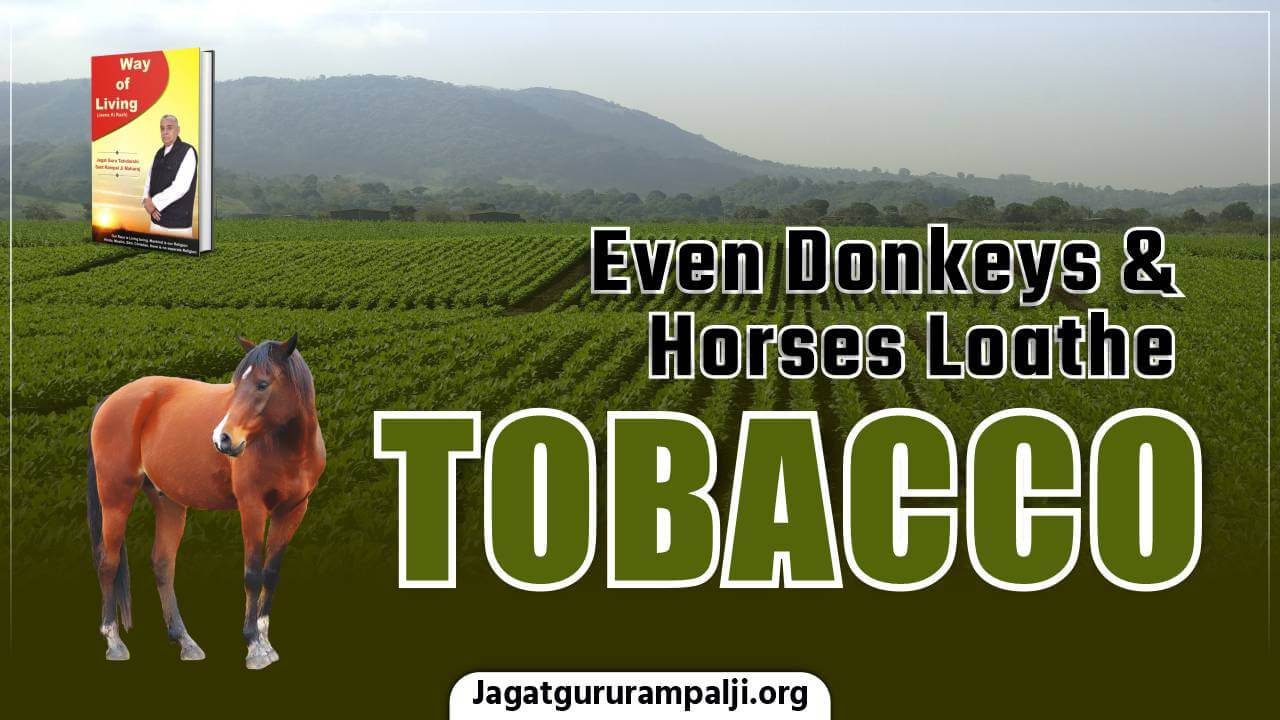 One day, Sant Garibdas ji (of Village Chhudani, District Jhajjar) mounted on a horse was going to a village in district Jind for some work. On the way, there were fields of village Malkhedi (district Jind). He was passing through those fields on the horse. Wheat stalks were standing up in the field. The horse abandoning the path started walking through the wheat crop. There were caretakers of the crop in the fields. They ran with sticks and were about to hit Saint Garibdas ji, saying that – “Have you gone mad? You have destroyed our crop. Can you not ride the horse straight?” As soon as they tried to hit Sant Garibdas ji with a stick, their hands froze overhead. Everybody stood at their respective place like a stone idol. They remained like that for five minutes. When Sant Garibdas ji raised his hand to bless them, their motionlessness was terminated and they all fell on their backs. The sticks fell from their hands. They felt as if they were paralysed. It did not take long for the caretakers to realise that he is not an ordinary man. Everyone cried and asked for forgiveness. Then Sant Garibdas ji said, “O innocent men! Is this the way to behave with a traveller? You ran to hit me. At least you should have first asked, “Why have you taken the horse in the middle of the crop?” Those farmers said, “Now tell us, why did the horse went in the middle of the crop?” Sant Garibdas ji asked, “What had you sown in this field before this crop?” They told that – “We had sown barley.” Sant Garibdas ji asked, “What had you sown before that?” They told that – “We had sown tobacco.” Sant Garibdas ji told that – “The bad smell of that tobacco is still present in this field. Disturbed by its bad smell, my horse abandoning the path started going from a distance. You smoke that tobacco; you are worse than the animals. Listen carefully! From today onwards, nobody will smoke hukka or consume tobacco in this village. If you do not obey my order, the village will incur great loss.” At that time, everybody said – “Okay”. After the saint went away, they said, “Let us fill our Hukti (small hukka)!” When they started filling the hukti (small hukka), the chilam dropped from their hand and broke. They brought chilam of another hukti; that also broke into small pieces in their hand. Whatever huktis they had in the field, all of them broke. The chilam also broke. The caretakers got frightened that this is a divine act of that saint. When they went to the village, all the hukkas and chilams in the village broke. There was turmoil in the entire village. A fearful atmosphere developed. When the caretakers came to the village, everybody came to know of the reason. Since that day, no one has smoked hukka in that village till date. The name of the village is ‘Malkhedi’.

Those who smoke hukka say, “I have bitter tobacco; take this and fill this in the chilam.” Another one says, “Mine is bitterer.” Sant Garibdas ji has told that after death, the messengers of Yam urinate in the mouth of that person who consumes bitter tobacco. They say, “You always wanted to consume bitterer tobacco; now dear, drink bitter urine.” They open his mouth and direct the flow of urine into his mouth.

Sant Garibdas ji performed this divine act to make people quit this vice. The effect of knowledge makes one quit a vice forever. Knowledge is gained from Satsang (spiritual discourses). Develop interest to listen to satsang. Listen to satsang.

Request: - Completely quit the above-mentioned vice. This will make the path of your life easily accessible.