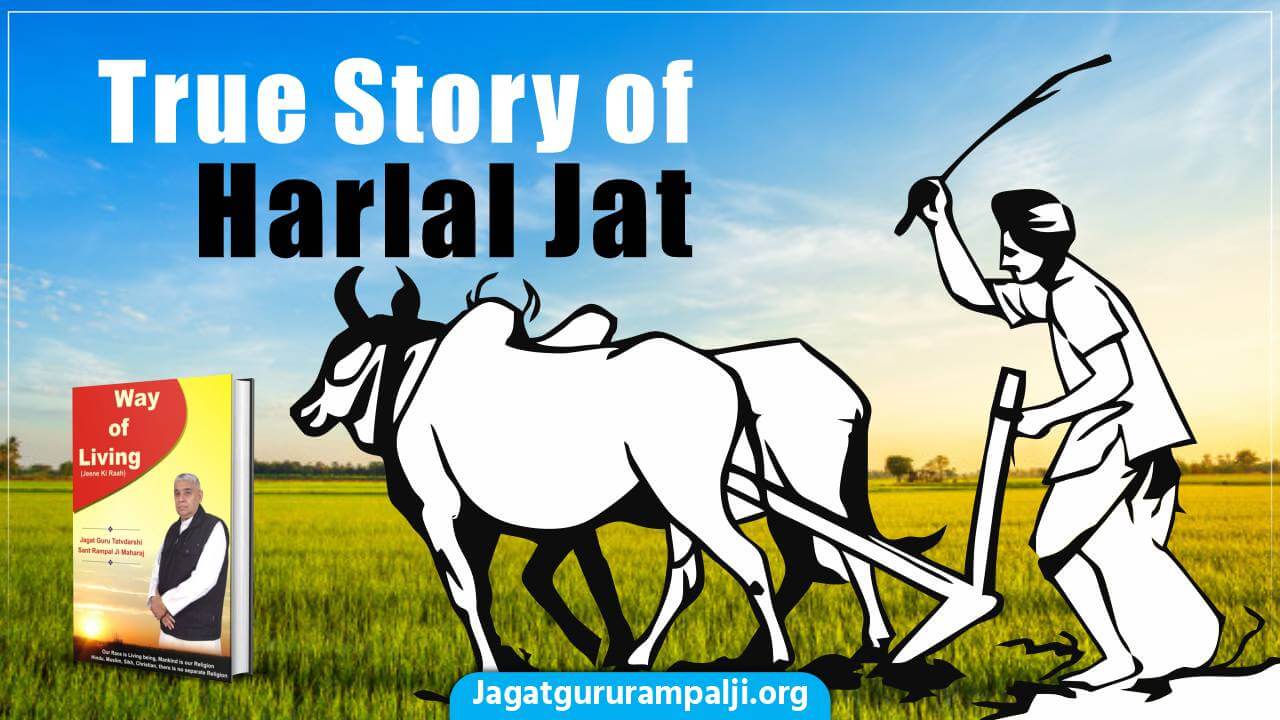 There was a Jaat farmer named Harlal in village Beri (district-Jhajjar, State-Haryana). He was of religious temperament. His entire family was of religious disposition. A man in saffron clothes stayed at the Village Beri’s meeting place. He delivered spiritual discourses for a few days. When devotee Harlal took his introduction, he found out that he does not have anyone at home. His parents expired when he was a child. He had renounced his home for bhakti. Devotee Harlal requested him – “You may please stay at our home. We will get the service of a saint. You will get full time to do bhakti.” The saffron-clothed person accepted it. Devotee Harlal had two houses. In one, women used to live. The second one was at a distance where animals were tied and men of the family used to live; it is called ‘Gher’ or ‘Pauli’. There was a attic room over this ‘Pauli’. They requested that sage to stay there. The entire family used to serve him. They used to feed him all the three times. After a few years, that saint died. After doing his final rites, they made his memorial in their field.

Shri Harlal Jaat used to transport goods of businessmen from one market to the other on a bullock-cart on hire, just as currently goods are transported on hired trucks or canters etc from one market to the other. It was around year 1750 when unrefined sugar, refined sugar, rice, wheat, millet, jaggery, barley, beans etc were transported through bullock-carts on hire. The path from Beri to Najafgarh Market went through Village Chhudani. One ox of Shri Harlal ji was of fair complexion who was a shirker. While walking in the cart, he used to sit down after some time. He was beaten with sticks to make him stand up. After a small distance, he again used to sit down. This sequence of events continued. One summer day, at around 4 o’clock in the morning, Shri Harlal ji was returning from Najafgarh market with a loaded bullock-cart. Near village Chhudani, at a short distance from a well, that ox sat down. Harlal ji started hitting him with a stick. Village Chhudani’s Saint Garibdas ji was having a bath on that well. He said, “O Harlal! Do not hit him. He has taken birth from a cow.” Saint Garibdas ji was a Jaat farmer. He had an ordinary attire of Haryana. He used to wear Dhoti-Kurta. Harlal ji said, “Brother! He has caused immense grief to me. After walking half a mile, he sits down.” Saint Garibdas ji went near that ox and said something in his ear. Immediately that fair-skinned ox stood up. Saint Garibdas ji said, “Now this ox will walk alright.” Shri Harlal ji did not believe it. He set forth in his bullock cart. That fair-skinned ox started walking even faster than the other ox. He did not even sit from Village Chhudani to Beri. Shri Harlal ji was suprised and elated. He told everything to his family members at home. Even they could not believe it. After that, Harlal Jaat went to Village Chhudani. The mistake he had made was that he had not asked the name of that person who was taking bath. He straightaway returned to Village Chhudani. He had thought that perhaps that man comes at the same time every day to bathe. Therefore, when he reached at that well at 4 o’clock in the morning, Saint Garibdas ji asked, “O Harlal Brother! Have you come to know about that ox?” Harlal ji said, “Nothing is hidden from you. I have come to ask you that what magic you have done. That ox walks even faster than the other one.” Saint Garibdas ji asked, “Tell me, a sage used to live in your attic room. How is he? I had met him one day. You had gone somewhere on your bullock-cart that day.” Harlal ji said, “He passed away four years ago. We have even built his memorial (maidi).” Saint Garibdas ji said, “This fair-skinned ox is that fraud Baba himself. I had a discussion of knowledge with him. I had advised him that your way of worship is wrong. You do not even do bhakti; you just eat and sleep. When your account will be checked in the court of God, then you will realise. Whatever you are eating, you will have to pay back.”

But he became annoyed and said, “You are a householder; I am a celibate. You may go. You have come to preach to a sage!”

Meaning: - Kabir ji has said that an arrogant man gets annoyed at the discussion of the name of Ram (God). Then he suffers from leprosy, his skin decays and he dies. He obtains the next life of a pig and eats rubbish. A pig’s nose also is immersed in rubbish. A person who does not do bhakti or who becoming a fake saint gains hollow fame among the people bears such hardships. 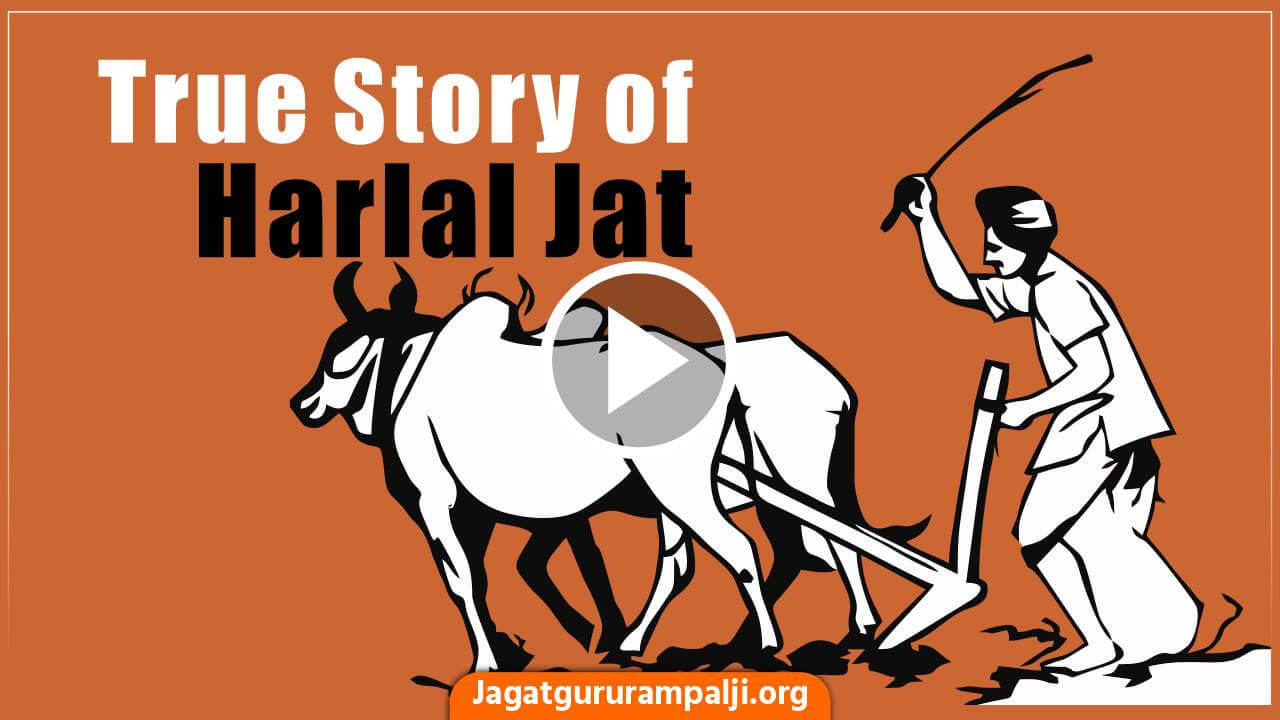 O Harlal! I had told him in his ear that – “Remember that day; what I had said, but you did not agree. O living being! You will have to pay the debt of this farmer. Whether you pay it back by being beaten with sticks or pay it happily. You cannot escape from it.” That fake Baba in the body of the ox understood it. He was a disciple of Supreme God Kabir earlier in some birth. But then he had gone into Giri sect. Due to which, relinquishing the true path, he is bearing hardships in the cycle of birth and death. He will never sit now. Harlal ji fell at the feet of Garibdas ji, and said, “O Sant Maharaj! Make me your disciple. I will renounce my home and live with you. My eyes have opened. A living being bears so many hardships without bhakti. Sant Garibdas ji uttered this speech: -

Meaning: - One does not have to renounce home to attain God. Happily perform your work of farming and transportation. Stay at home. Do the bhakti of God as told by me. You will be called a true devotee.

This very evidence is in Yajurved Chapter 40 Mantra 15 that: -

Meaning: Sant Garibdas ji said that – “The true mantras of true way of worship that I will give you, you have to do their jaap while eating, drinking, while being awake, that is, when you wake up in the morning, do jaap for some time; do jaap for some time before sleeping; while sitting and then while getting up remember the name of God. In this way, the household chores are also performed and rememberance of mantra too. For example, we see in the villages that people play cards the whole day. People waste their time over smoking hukkas. They waste their time in discussions on politics or in criticism of a person or in watching dramas and films. If we make good use of that time in the worship of God and in spiritual discussion, then our salvation is possible.

Shri Harlal Jaat took initiation and came home. He told everything to his family members. He broke the memorial (tomb) of that fake baba and took his entire family to Chhudani. He got them all initiated from Sant Garibdas ji. He got his and his entire family’s welfare done. By the order of Sant Garibdas ji he never used that fair-skinned ox in the bullock cart or a plough. He kept him separately from all the animals and fed him good fodder. Sant Garibdas ji told, “He was a devotee. He has become an animal because of his wrong deeds. Do not make him work.” That ox lived for five years. Devotee Harlal ji took care of him considering him to be a devotee. God Kabir helped his devotee who had gone astray in the life of an animal. If he ever gets a human life in future and if he finds a complete guru, then he can attain salvation; otherwise, the sufferings in the lives of eighty-four lakh types of living beings is ready.

Even today, the offspring of devotee Harlal are witnesses of this incident in Beri.