40. Test of Disciples by God Kabir 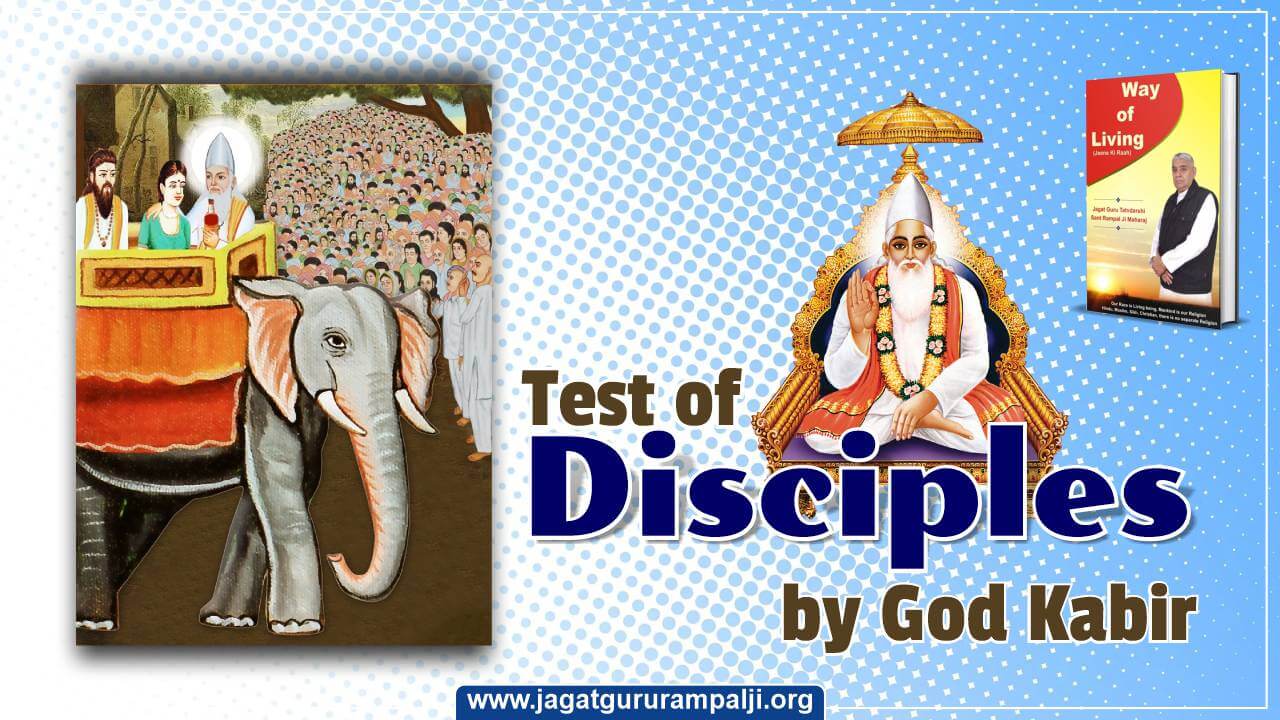 Impressed by the numerous miraclulous divine acts performed by Supreme God Kabir, eighty-four lakh people had become His disciples. God knows about the past, present and future. He knew that seeing these miracles and because of the materialistic benefits gained by them due to my blessings, they are hailing me. They do not have faith in me that I am God. But in imitation of each other, they do say that Kabir Ji, our Sadguru, is God Himself. They also used to tell their benefits. One day Supreme God Kabir Ji thought of testing the disciples that – “Let me see how much knowledge they have comprehended. If they do not have faith, they do not deserve salvation. They are a futile burden on my head.” On thinking this, he made a plan. He said to his supreme disciple Ravidas, “Hire an elephant.”

There was a beautiful prostitute in Kashi City. At a short distance from her house was house of a devotee of Kabir Ji. Kabir Ji was doing Satsang in his courtyard at night. That day that prostitute did not have any customer. To listen to the words of Satsang, she sat down in a chair on the roof of her house. She listened to the satsang the whole night and in the morning went to the Satsang site and introduced herself to God Kabir ji, and said, “Guru ji! Can a sinner like me also be salvaged? For the first time in my life, I have listened to things of self-welfare. Now I have only two options that either I attain salvation or I atone for my sins by committing suicide.” God Kabir Ji said, “Daughter! It is a heinous sin to commit suicide. God destroys all the sins if one does bhakti. Take initiation from me and do bhakti, and avoid committing sins in future.” That sister agreed and took a pledge. She took initiation from God Kabir and started doing bhakti. And wherever God Kabir used to deliver satsang, she started going there to listen to it. Due to which, the devotees of Kabir Ji did not like her coming to the satsang. They used to say to her that – “Guru ji is being defamed because of you. Do not come to the Satsang. You sit at the forefront close to Guru ji; do not sit there.” The girl told these things to Guru Kabir Ji, and started crying bitterly. Supreme God said, “Daughter! You may continue to come to Satsang.” Kabir Ji clarified through Satsang that – “How can a dirty cloth become clean without coming in contact with a soap and water? Likewise, how can a sinner get his/her welfare done by remaining away from Satsang and Guru? Devotees do not hate prostitutes and the sick; they respect them. By discussing spiritual knowledge with them, they inspire them to attain salvation.” Even after repeated advice of God Kabir Ji, the devotees kept forbidding that girl from coming to Satsang, and used to give excuse that – “Because of you, Guru ji has become defamed in Kashi. The people of Kashi repeatedly say to us that – “Even a prostitute visits your Guru Ji. What sort of a Guru he is.”

God Kabir said to that girl, “Daughter! You will come with me and sit on an elephant.” The girl said, “Your wish is my command, Gurudev!” The next morning at around 10 o’clock, the three of them mounted on an elephant passed through the main bazaar of Kashi City. Saint Ravidas was riding the elephant. The girl was sitting behind Ravidas ji and in front of Kabir ji, that is, she was sitting in between the two. Kabir ji filled Ganga water in a bottle. He was sipping it by putting that bottle in his mouth. People thought that Kabir Ji is drinking alcohol. Under the effect of alcohol, he is openly roaming in the bazaar with the prostitute. The people of Kashi are telling each other, “Look! Kabir weaver who used to deliver great sermons; today his pretensions have been revealed. These people do such things with the excuse of satsang.” The people of Kashi were bringing Kabir Ji’s disciples and showing them that – “See the deed of your God. He is drinking alcohol and openly roaming with a prostitute.” On seeing this divine act, those fake eighty-four lakh disciples abandoned Kabir Ji, and started doing the previous way of worship. Getting entrapped in regard for public opinion, they turned away from the Guru.

God Kabir used to perform divine acts like these especially when the Emperor of Delhi, Sikander Lodhi, had come to Kashi. At that time, Emperor Sikander Lodhi was present in Kashi. The Qajis and the Pandits complained to the Emperor that Weaver Kabir is committing a wrongdoing. Finishing all shame, he was openly doing a wrong deed with a prostitute while sitting on an elephant. He was drinking alcohol. The Emperor ordered to immediately catch him and kill him by drowning in the Ganga. Emperor Sikander Lodhi himself put handcuffs on Kabir ji’s hands, shackles on his feet and an iron collar around his neck. Making Kabir ji sit in a boat, he was taken to the middle of the river, and thrown into the river by the soldiers. The handcuffs, shackles and the iron collar themselves broke and fell in the river. God became seated in a lotus pose (cross-legged sitting position) on the water. The water of Ganga was flowing under him in a circular manner. God was peacefully sitting on the water. After some time, God Kabir ji came to the bank of the river Ganga. On the order of Sheikh Taqi, the soldiers caught Kabir ji and making him sit in a boat, tying heavy rocks on his back and feet and tying his hands behind his back with a rope, threw him in the middle of the river Ganga. The ropes broke. The rocks sank in the water. Supreme God Kabir kept sitting on the water. When Sheikh Taqi saw that Kabir did not drown in the river Ganga, then getting furious, he persuaded the Emperor to give order of firing cannon balls at Kabir ji. First, stones were hurled, gunshots were fired, and arrows were shot at Kabir ji. Finally, cannon balls were fired at Kabir ji for twelve hours. Some used to fall there itself near the bank; some used to fall on the other bank; some used to fall far off in some pond. Not even a single cannon ball, stone, gunshot or arrow reached near Supreme God Kabir ji. Even on seeing all this, the people of Kashi could not recognise the Supreme God. Then Supreme God Kabir ji thought that these are foolish people. At that very moment, Kabir ji vanished into the water of Ganga, and appeared in the house of devotee Ravidas ji. The spectators believed that Weaver Kabir died by drowning in the Ganga. Sand and mud must have got accumulated over him. Everybody went to the city while rejoicing, dancing and jumping. Sheikh Taqi along with his team went to Saint Ravidas ji’s house to tell him that Kabir, whom you used to call God, has drowned and died. On going to Saint Ravidas ji’s house, he saw that Kabir ji is playing an ‘Iktara’ (one string musical instrument) and singing a hymn. Sheikh Taqi was aghast. He went to Emperor Sikander Lodhi and told him that – “Kabir has escaped. He is sitting in Ravidas’s house.” On hearing this, Emperor Sikander Lodhi went to Saint Ravidas’s hut. God Kabir ji disappeared from there, and sat down in a meditative state on the top of the water of river Ganga just as one sits on land. Emperor Sikander Lodhi asked Ravidas, “Where is Kabir Ji?” Saint Ravidas ji said, “O Emperor! He is Complete God. He only is Alakh Allah. Recognise Him. He is the Master of his own will. He can go wherever He wishes. I do not know where he has gone. He lives with everyone.” At that very moment, someone told that Kabir Ji is sitting in the middle of Ganga and doing bhakti. All the people, the Emperor and the soldiers again went on the bank of the river. The Emperor sent a message via fishermen in a boat asking Kabir ji to come out. The fishermen took the boat close to Kabir ji and delivered the message that – “Emperor Sikander is calling you. Come.” Supreme God Kabir ji sat in that ship (big boat) and came to the shore.

Emperor Sikander again got him apprehended and ordered to tie his hands and feet and get him murdered by a bloodthirsty elephant. The public was standing on all sides. Sikander was sitting at a high place. God was placed on the ground with his hands and feet tied. The mahout (elephant driver) made the elephant drink alcohol, and moved forward to trample Kabir Ji to death. Kabir Ji showed a lion standing next to him. Only the elephant could see him. The elephant trumpeted and ran back out of fear. The mahout feared that he will lose his job. Spearing the elephant, he tried to take him towards Kabir ji, but the elephant ran backwards. Then the Mahout also saw the lion standing there, so the goad dropped from his hand out of fear. The elephant ran away. The shackles of Supreme God Kabir ji broke. Kabir ji stood up and as he stretched his limbs, he became tall. His head started appearing to touch the sky. His body started appearing bright. Trembling with fear, Emperor Sikander fell at the feet of Supreme God Kabir. He asked for forgiveness and said, “You are God. Spare my life. I have committed a grave mistake. I have recognised you now. You are yourself Allah who has come on earth.” Then Supreme God Kabir came to Kashi city and sat down in the courtyard of that same Prostitute’s (Ganika) house. The girl was massaging his feet. She kept Supreme God Kabir ji’s feet on her thighs.