2. A Brief Definition of the Ocean of Happiness | Way of Living 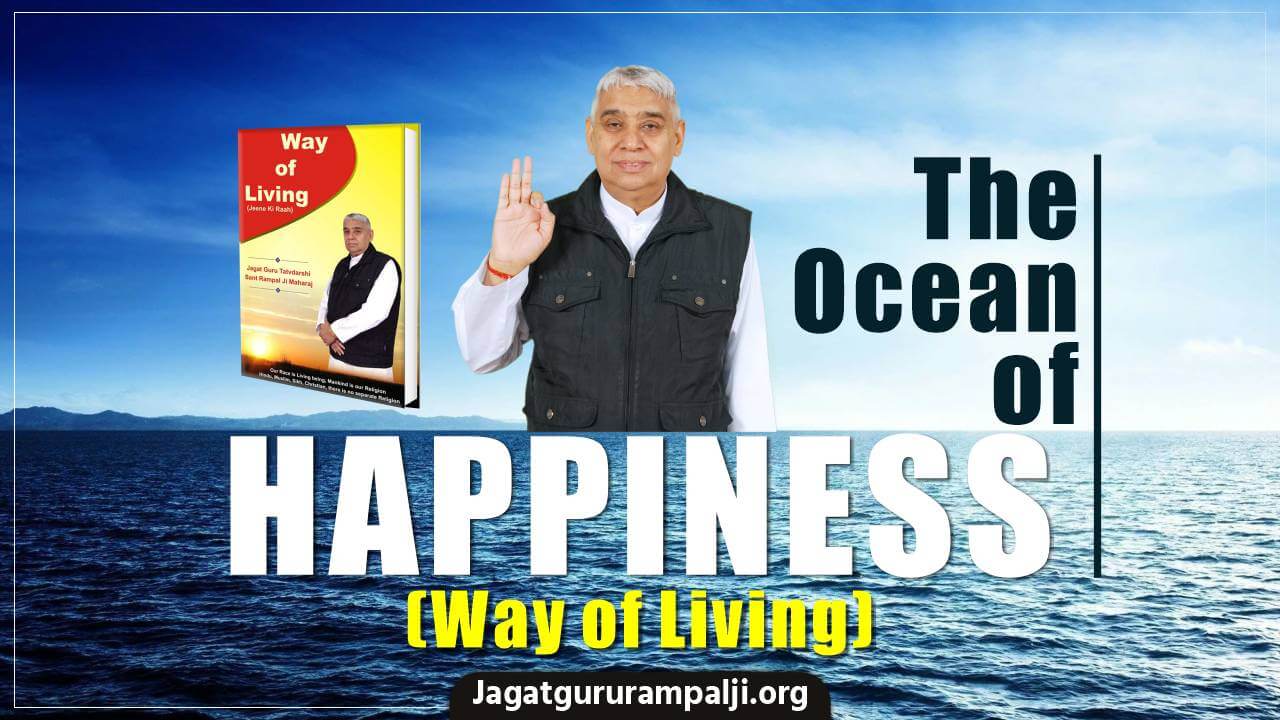 A brief definition of the Ocean of happiness, that is, the Immortal God and His kingdom Amar Lok (Eternal Place)

Meaning: - When I (author) am alone, then sometimes such emotions arise in me. At that time, everybody appears to be mine. No matter how much one has tormented me, I do not develop hatred towards them. I develop mercy towards everyone. This state only lasts for a few minutes. It is called the “lehar of mehar” (the wave of mercy). Every soul experiences this amount of happiness after going to Satlok, that is, to the Eternal Supreme Abode. Infinite such emotions keep arising in the soul there. When that emotion disappears from my soul, then that same miserable state commences – “Why did he say this? That person is not nice. That loss has occurred. What has happened?” This is called the (Kehar ki Lehar) wave of disaster (misery).

Infinite waves of mercy arise in that Satlok. There is no disaster (terrible misery) there. As such, there is no misery in Satlok. The meaning of “Kehar” is terrible misery. For example, in a village, due to mutual conflict the rivals killed three members of the opponent family; at some place thousands of people are killed in an earthquake; that is when it is said that - disaster befell. In the above-mentioned speech, a brief definition of the ocean of happiness has been given. It has been stated that, that Eternal Place is unchanging, indestructible, that is, never gets destroyed, and the Supreme God who lives there is Immortal. That place and the Supreme God is the ocean of happiness. For example, when a ship goes 100 or 200 km away from the shore of the port, the passengers do not see anything apart from the water, that is, other than the ocean. Similarly, there is nothing other than happiness in Satlok (Satyalok), that is, there is no sorrow there.

Now the translation of the previously mentioned speech is being done: -

Supreme God Kabir explained Sukshm Ved to His virtuous soul Garibdas ji. By making the soul and (man) mind as characters, Sant Garibdas ji (of village Chhudani, district-Jhajjar, State-Haryana), explaining the sufferings of Kaal’s (Brahm) Lok  and the joys of Satlok, have inspired the human being of the world to do the true worship mentioned in the holy scriptures to go to that Supreme Abode. “Man tu chal re sukh ke sagar”, means, O Man (mind)! Come to the Eternal Supreme Abode where the (Shabd) word does not get destroyed. Therefore, the meaning of “Shabd” is to do with eternity that, that place is an (Sindhu) ocean of eternity, and is a (Aagar) depot/mine of salvation-like precious stone. In this Kaal Brahm’s Lok, you even did bhakti, but because of not finding a Tatvdarshi Saint who tells scripture-based way of worship, you have been wandering for millions of births. You spend the whole life in accumulating millions and billions of rupees, and then you die. You left the world leaving behind the accumulated wealth that you obtained as a result of the previous deeds. The sins that you incurred while accumulating that wealth went with you. You did not do scripture-based way of worship in that life by taking initiation from a Tatvdarshi Saint. As a result of which, you went empty-handed. You acquired wealth in return for the previous meritorious deeds. That wealth remained here. You did not get anything. You got the sins of accumulating wealth and not doing scripture-based worship.

Due to which, you suffered in the lives of kukar = dog, khar = donkey, sukar = pig, kaua = crow, hans = a bird who only eats pearls in a lake, buga = heron bird etc.

Translation: - O Human being! You performed extremely difficult religious practice of Kaal (Brahm). Renouncing home, you resided in jungle. Then you roamed in villages and cities from door to door.  A worshipper who is engrossed in worship in the jungle goes to the nearby village or city to obtain alms. If he does not get complete alms from one home, he goes to other homes to get food and then returns to the jungle. Sometimes, worshippers bring alms one day and then subsist on that alone for two-three days. A thin handkerchief like cloth is called a sieve. Folding the chapattis into that thin cloth (sieve), they tie them to the branches of a tree. Those chapattis become dry. They eat them by softening them by soaking in water. Saving the time that is wasted in going to beg for alms, they devote that time in the worship of Kaal Brahm. The meaning is that to get rid of birth and death, that is, to attain complete salvation, they used to perform intense penance according to the method mentioned in the Vedas and Lokved (folklore). Because of not finding a Tatvdarshi Saint, they did not find the Nirgun Rasa, that is, the hidden knowledge which is called Tatvgyan, because it is mentioned in Yajurved Chapter 40 Mantra 10 and in the summary of the four Vedas, Shrimadbhagavat Gita Chapter 4 Verse 32 and 34 that the detailed knowledge of the yagyas, that is, the religious rituals which the Sachidanand Ghan Brahm, that is, Param Akshar Brahm narrates by uttering from His lotus-mouth is Tatvgyan, that is, Sukshm Ved. The Giver of the knowledge of Gita, Brahm, has stated that you may understand that Tatvgyan by going to the Tatvgyanis (Knower of the Tatvgyan). By prostrating before them and politely asking a question, those Tatvdarshi Saints, who are well-versed with the essence of God, will instruct you about Tatvgyan. This proves that neither is the Tatvgyan in the Vedas, nor in Gita. Had it been there, Brahm would have uttered one more chapter. He could have said that read the Tatvgyan in that chapter. Sant Garibdas ji on the behest of (man) mind has advised the human beings that, because of not finding that Nirgun Rasa, that is, Tatvgyan, by worshipping Kaal Brahm, you became a king in millions of births. Nevertheless, the desire of mind did not end because a king thinks that there is happiness in heaven; there is no happiness in this kingdom; there is no peace. 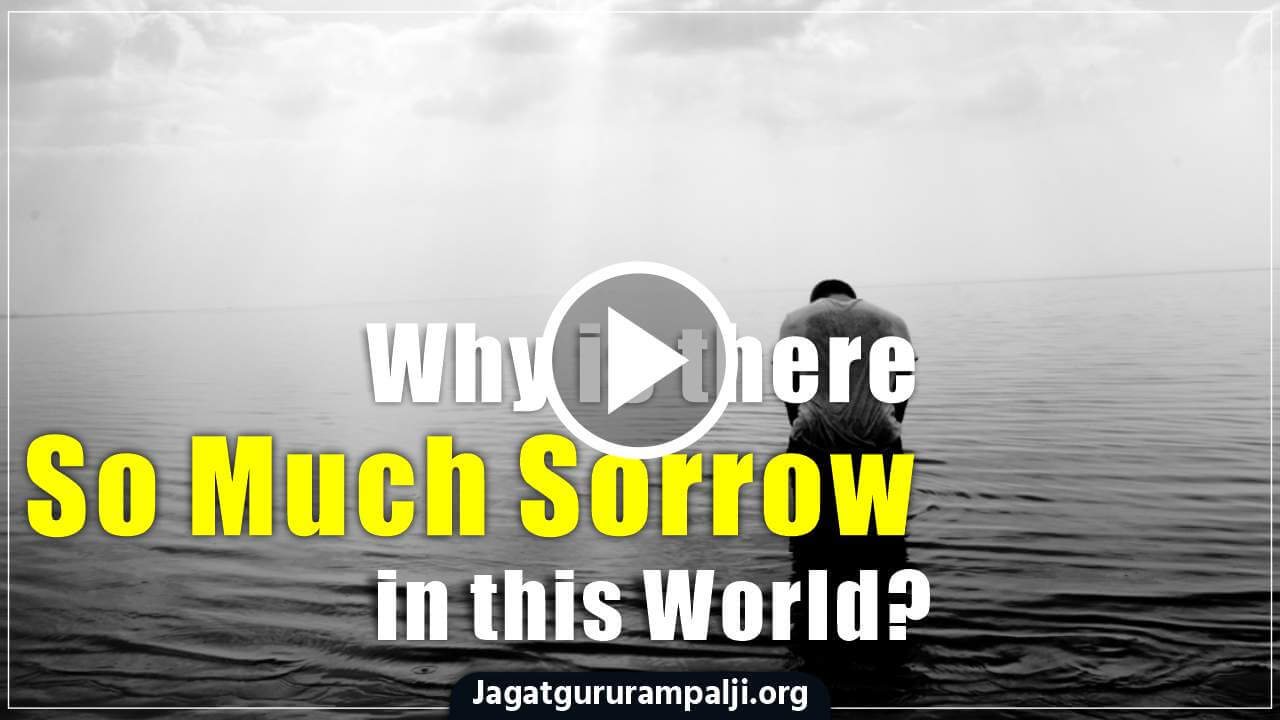 Meaning of Nirgun Rasa: - The meaning of Nirgun is that the thing is present but its benefit is not being reaped. Fruit and a tree are in Nirgun form in the seed of a tree. After sowing that seed in the soil and irrigating it, that Sargun thing (tree, fruit of tree) is obtained. Because of not having this knowledge, we remain devoid of the fruit and the shade of mango tree. Rasa = difficulty, that is, a complicated task. In Sukshm Ved, Supreme God Kabir has stated that: -

Translation: - Supreme God Kabir has said that the nine maund yarn of spiritual knowledge is entangled. It used to take weavers more than a day to disentangle one kilogram of entangled yarn. If the thread broke while disentangling it, the cloth used to get a knot in it. Nobody used to buy a cloth with a knot. Therefore, Supreme God Kabir Weaver has explained by giving the precise example of weavers that nobody used to disentangle an excessively entangled yarn. The spiritual knowledge is just like that nine maund of entangled yarn which a Satguru, that is, a Tatvdarshi Saint will disentangle in such a way that it will never entangle again. By doing worship based on the entangled spiritual knowledge, that is, according to the Lokved (folklore), we went to heaven and hell, went to the lives of eighty-four lakh types of living beings, acquired the kingdom of a piece of land on earth, or the kingdom of heaven, and then by again falling in the cycle of birth and death, we suffered hardships one after another. But by worshipping Kaal Brahm according to the method mentioned in the Vedas, that supreme peace and the eternal supreme abode were not attained, which have been mentioned in Gita Chapter 18 Verse 62, and neither did we attain that supreme state of the Supreme God, having gone where, worshippers never return to the world as has been mentioned in Gita Chapter 15 Verse 4. The following benefit is obtained by the worship of Kaal Brahm.

Translation: - By performing religious practice of Kaal Brahm, a worshipper also acquires the position of Indra. Indra is the position of the King of Heaven. He is also known as Devraj, that is, King of the demi-gods, and Surpati. He also keeps the irrigation department, that is, rain ministry under him.

Question: - How does one acquire the position of Indra (King of Heaven)?

Question: - What is the tenure of Indra (King of Heaven)? Which life does a soul go to on leaving the post of Indra after death?

Answer: - Indra stays on the post of the king of heaven for 72 Chaukadi, i.e., 72 Chaturyug. One Chaturyug consists of Satyayug + Tretayug + Dwaparyug and Kalyug, which is 1728000 + 1296000 + 864000 + 432000 respectively. The combined period of Satyayug + Tretayug + Dwaparyug + Kalyug, that is, a period of 43 lakh 20 thousand years makes one Chaturyug. That worshipper enjoys the luxuries of the king of heaven on the post of Indra for 72 such Chaturyugs. In one Kalp, that is, in one day (which is of one thousand eight [1008] Chaturyug) of Brahma ji, 14 souls acquiring the position of Indra enjoy their virtuous deeds. After enjoying the position of Indra, those souls acquire the life of a donkey.

Previous << 1. Common Belief of Human Life | Way of Living   ||    3. Dialogue between Sage Markandey and an Apsara (Celestial Nymph) >> Next