The Truth of Universe’s Creation According to All Religions 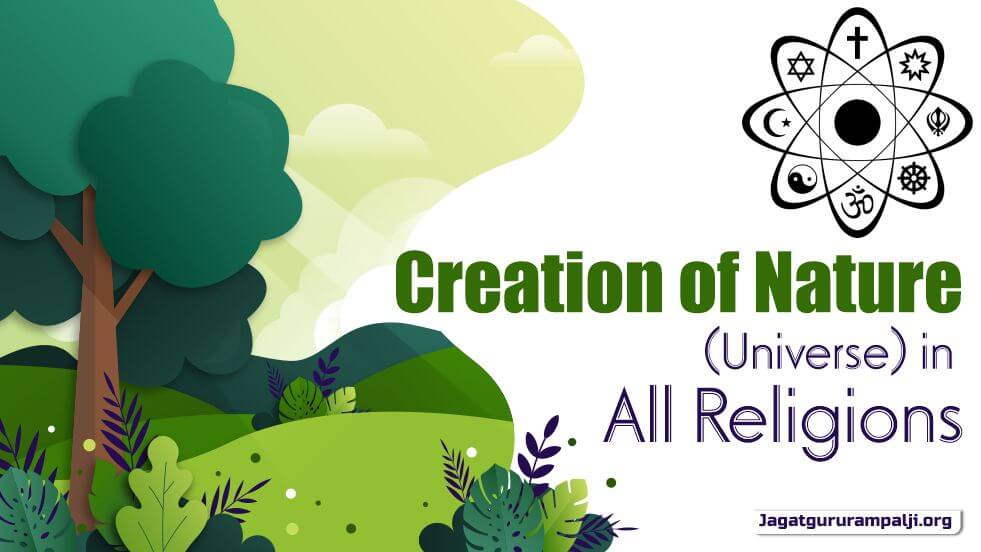 Amazing and unbelievable, How planets rotate perfectly in their orbit? How is Sun a hot moving ball and moon so cool? Who created the sky, the Earth, the Water, the Air and above all human beings/living beings? Is there some Supremely intelligent being? Certainly, the universe was not created by chance. There is definitely some divine power, some supremely powerful person who has created everything. The mystery regarding the creation of the universe (Srishti Rachna) which was hidden till today is now revealed. Since ages (Yugas) it has been the disgrace of mankind that this True Spiritual Knowledge (Tatvagyan) is kept hidden. The devotee society till now was ignorant about the true story of the creation of the universe. Whereas, every holy scripture provides enough evidence as How did the universe begin? 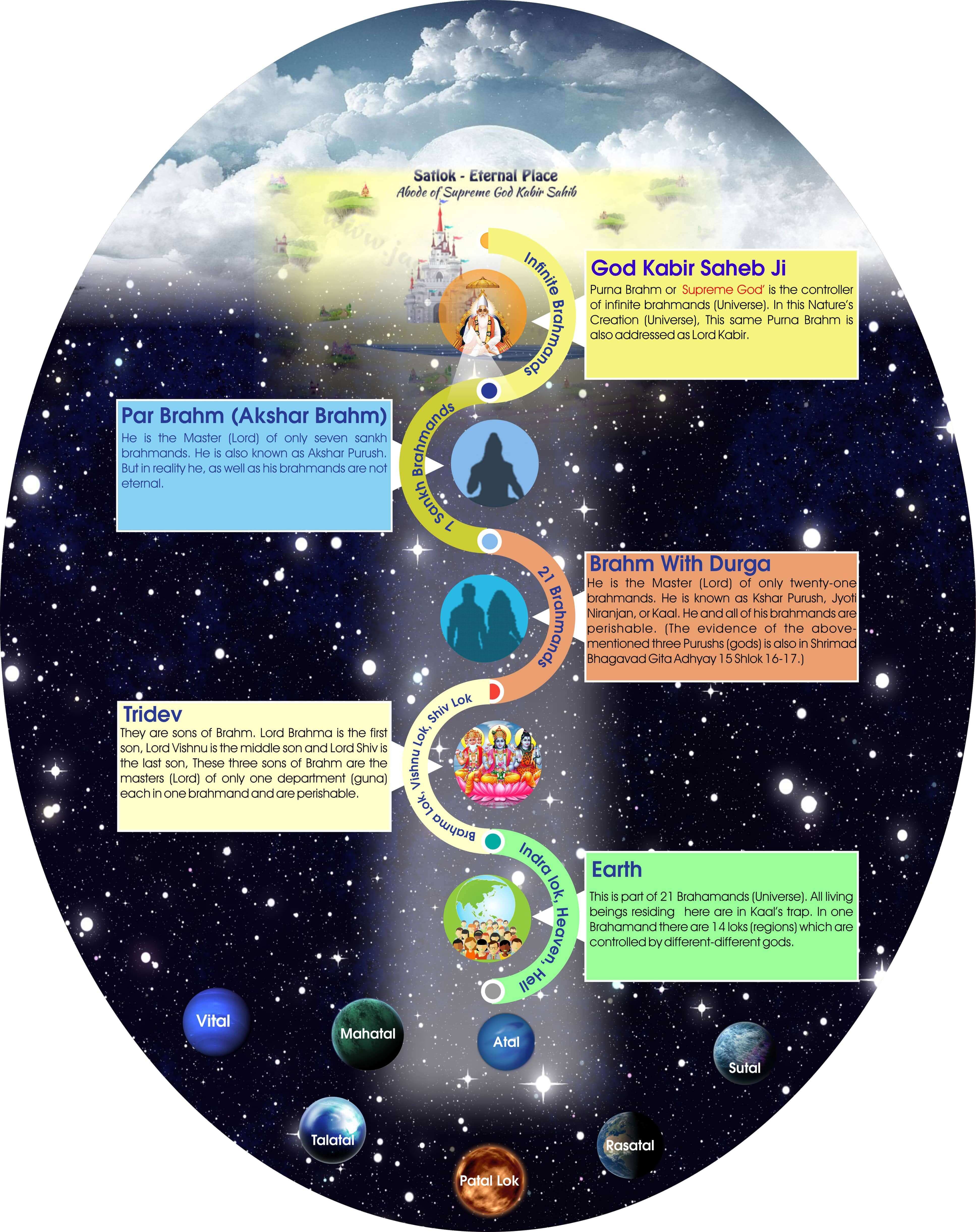 How did the Universe Begin?

When for the first time the God-loving souls will read this, they will feel that this is a baseless story. But moving ahead, the sufficient evidences which will be provided from all holy scriptures from all religions like Hinduism, Islam, Christianity, Sikhism, Jainism and even from the Big Bang theory will bound devotees to believe this to the extent, that they will bite their fingers between their teeth as where till today this authentic nectar-like spiritual knowledge was kept hidden? After reading this elaborate description of creation even an atheist will become curious.

remained unanswered, therefore, huge amount of patience would be required while reading this sacred knowledge which will be useful for your next hundred and one generations. All above such queries are henceforth resolved.

Creation of Universe in Every Religion

All religious spokespersons, spiritual guides, Saints, Gurus, Kazis, Mullahs, Fathers, Acharyas, Shakracharyas, Saints, Mahants, Mandleshwars even scientists have given a lot of theories regarding the creation of the Universe but due to the lack of spiritual knowledge, they could not provide relevant evidence from the Holy Scriptures. They have merely fooled masses by explaining folklore and legends which are their personal opinions. Only True Spiritual Saint Tatvadarshi Saint Rampal Ji Maharaj has been able to provide sufficient evidence from all Religious scriptures regarding the creation of the universe. Let us explore the diverse theories that are proven in Hinduism, Islam, Christianity, and Sikhism. 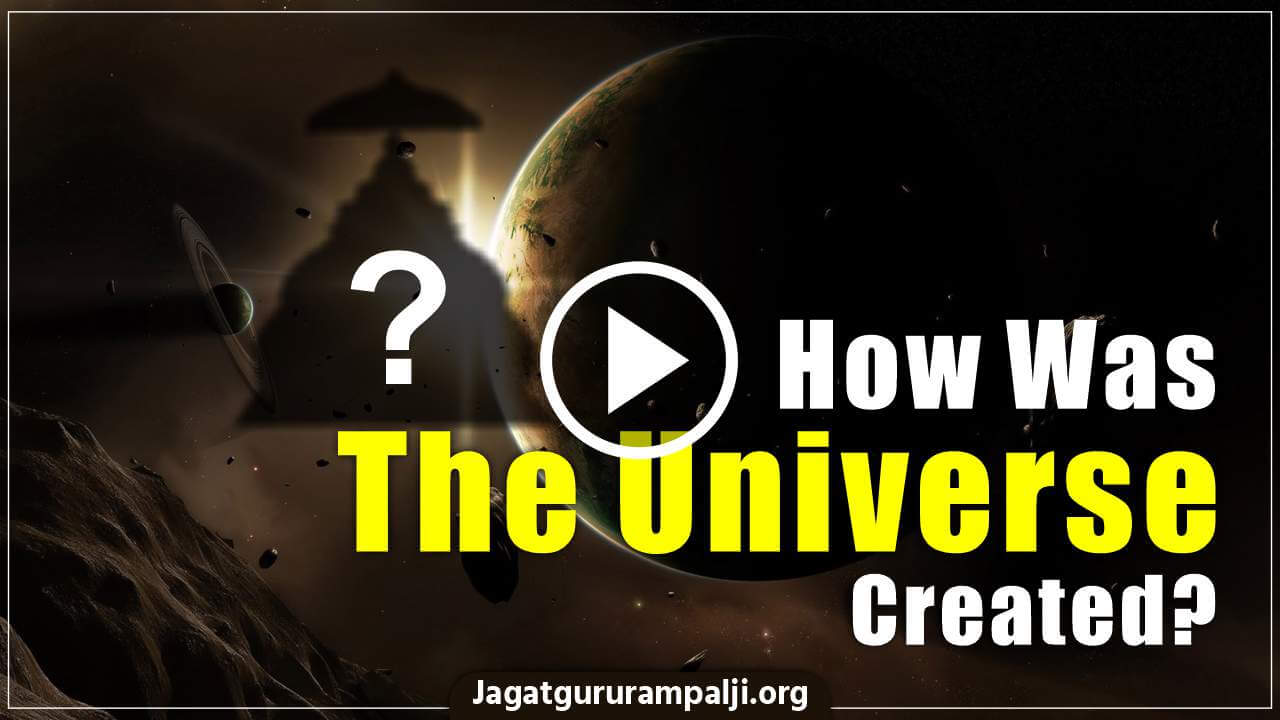 Creation of Universe According to Hinduism

People following Vaishnavism believe Vishnu created Brahma and ordered him to create further the universe. People following Shaivism believe Lord Shiva is the creator, and Bhagwan/Parmatma/God is formless. Whereas, Vedas prove God is in form. He is not formless. God lives in the immortal abode, the eternal place which is called ‘Satlok’, ‘Sachkhand’. The name of God is KavirDev or Kabir Sahib. 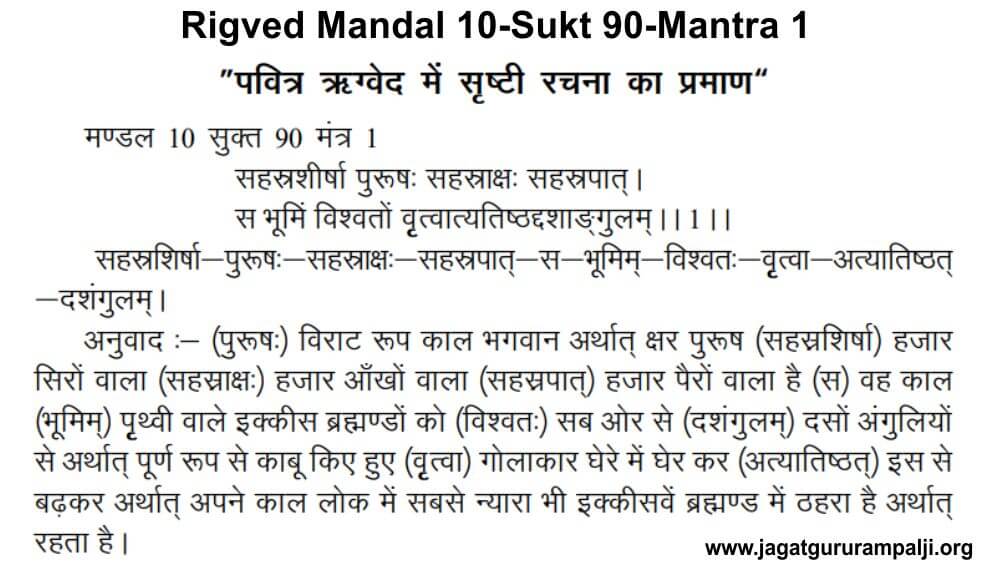 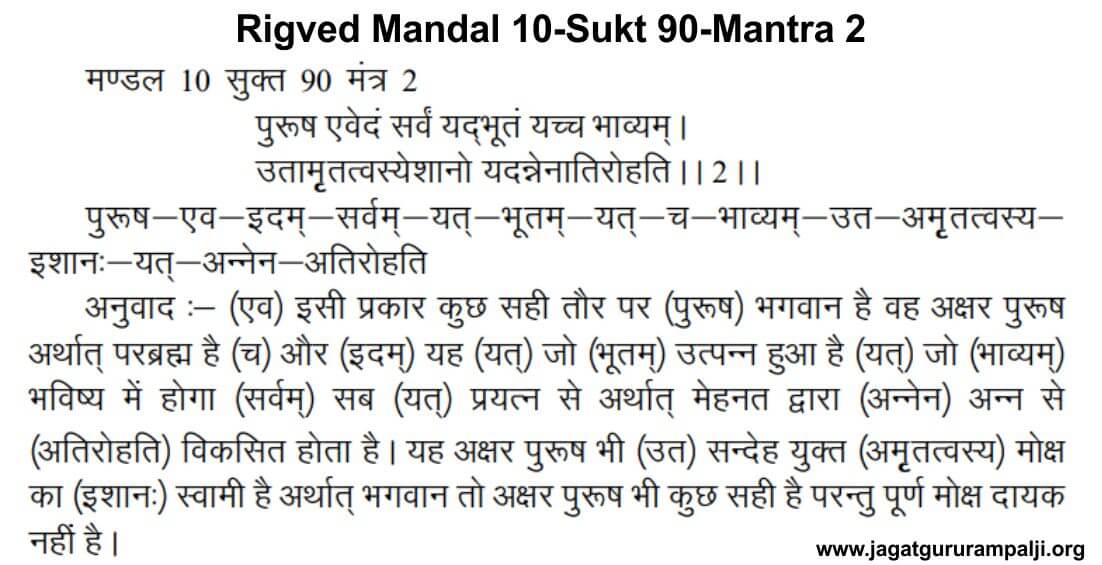 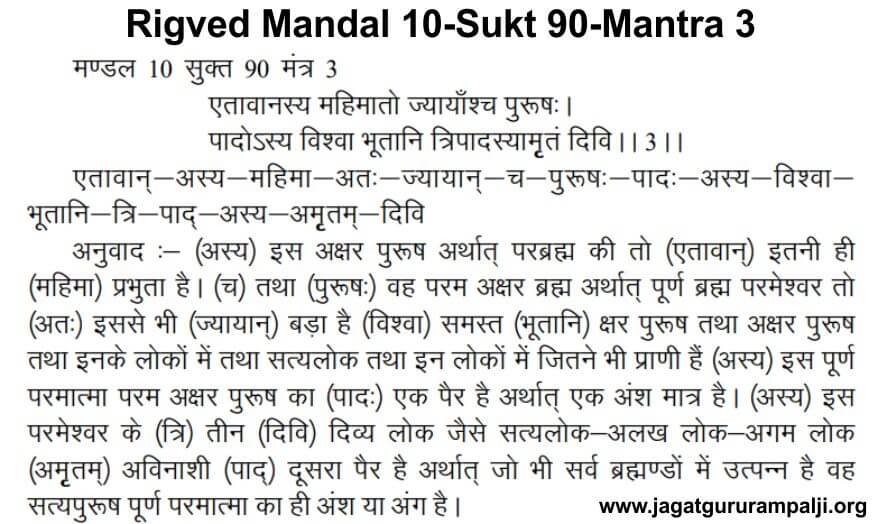 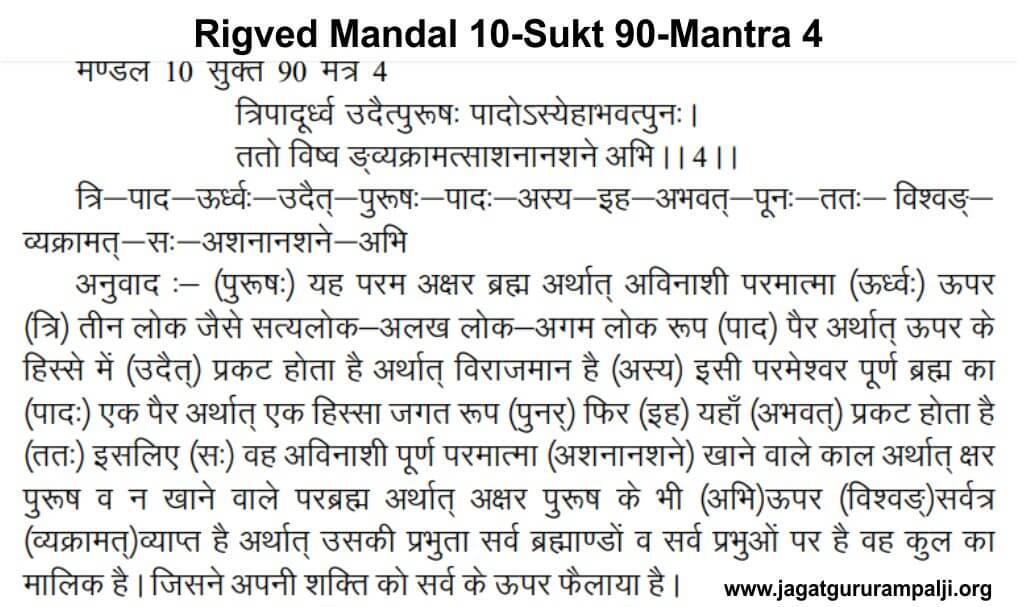 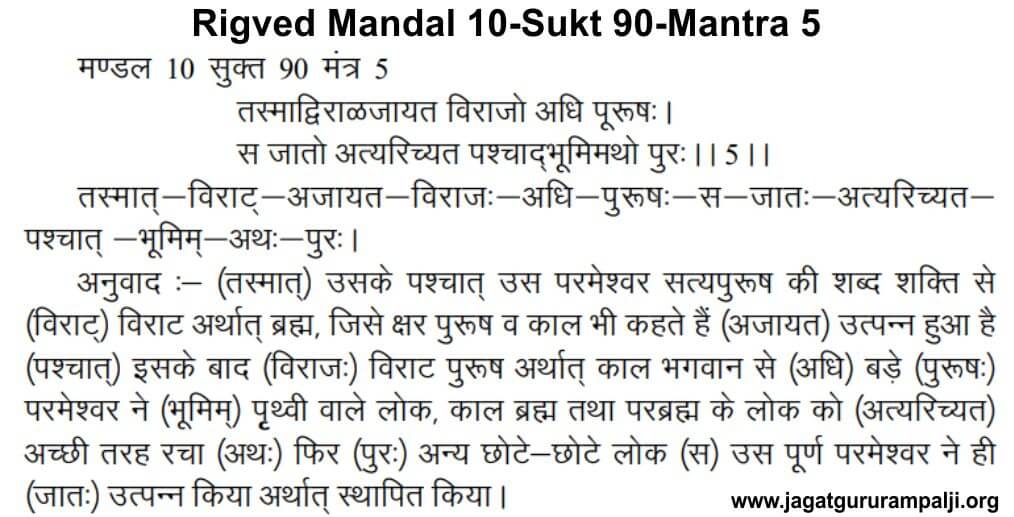 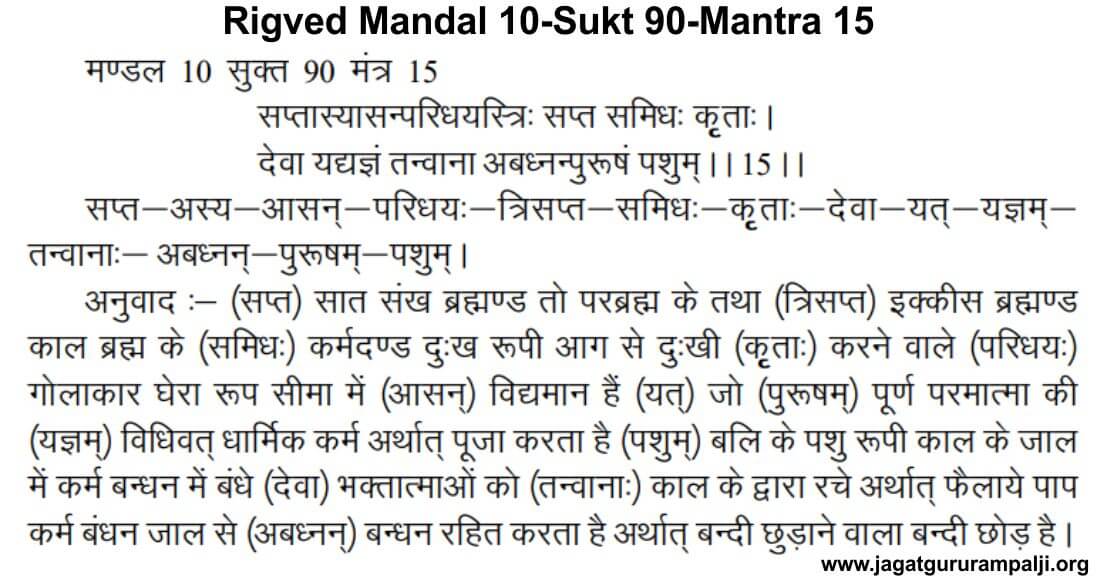 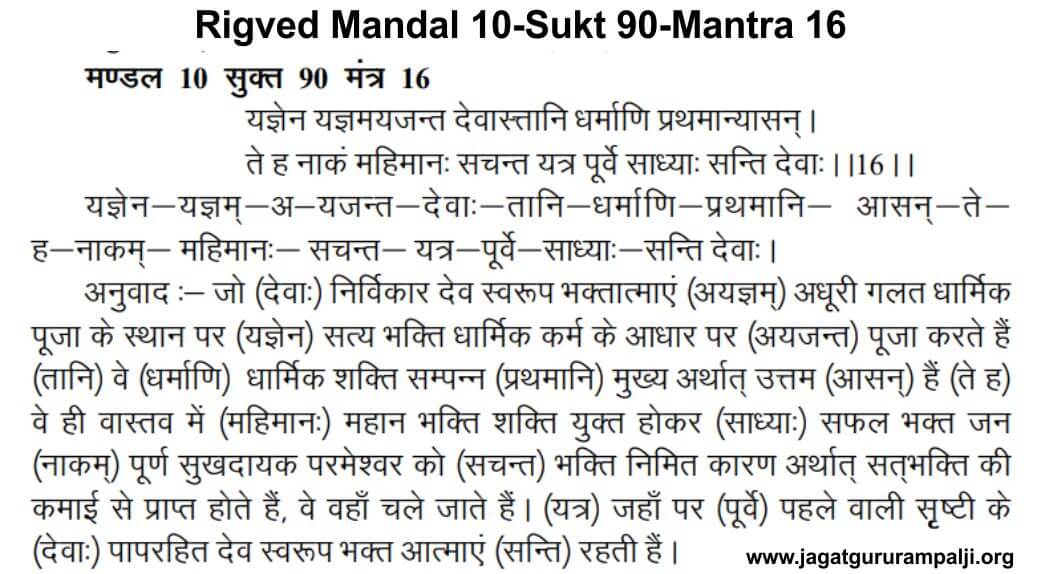 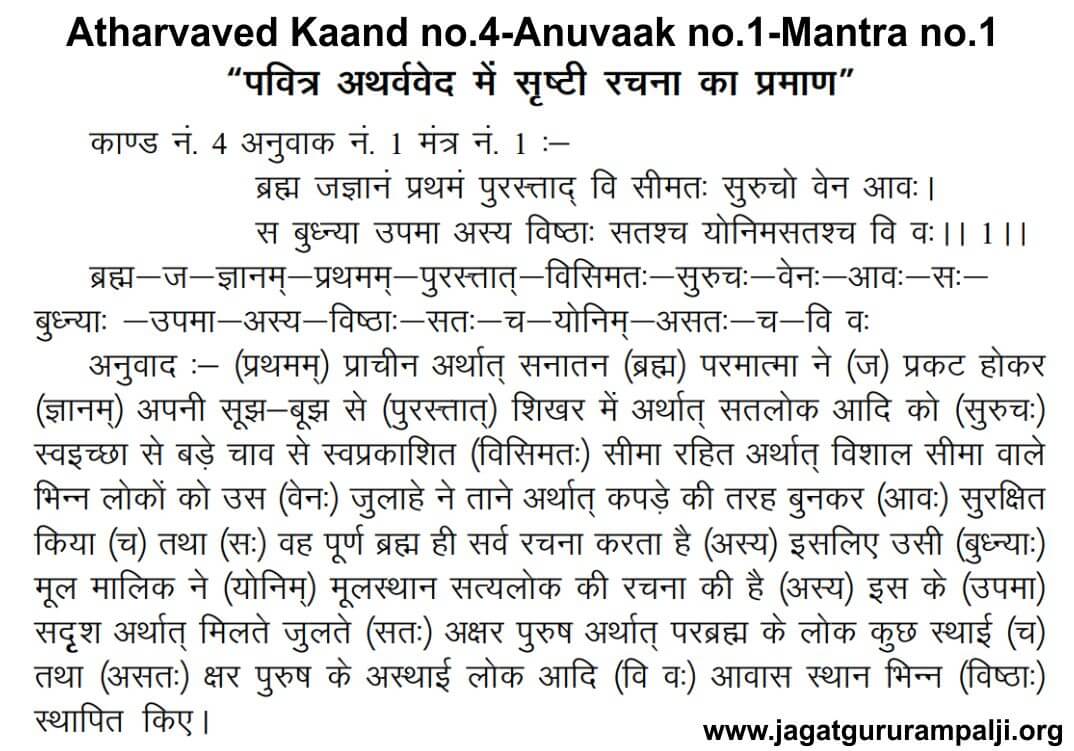 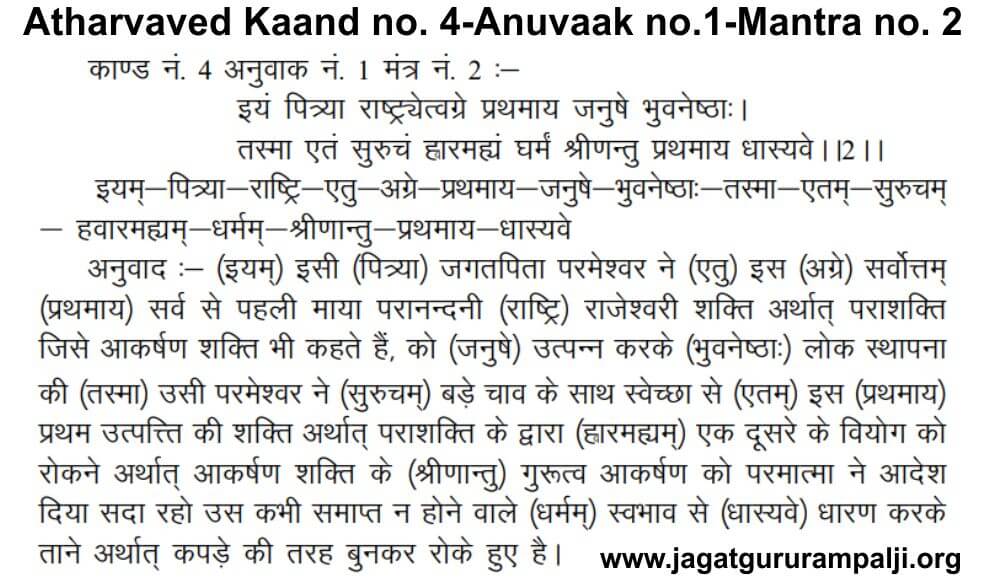 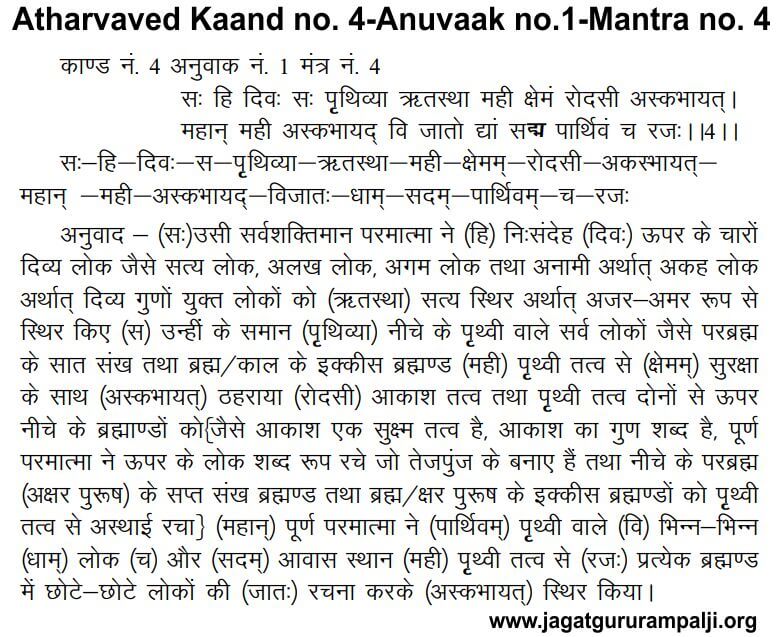 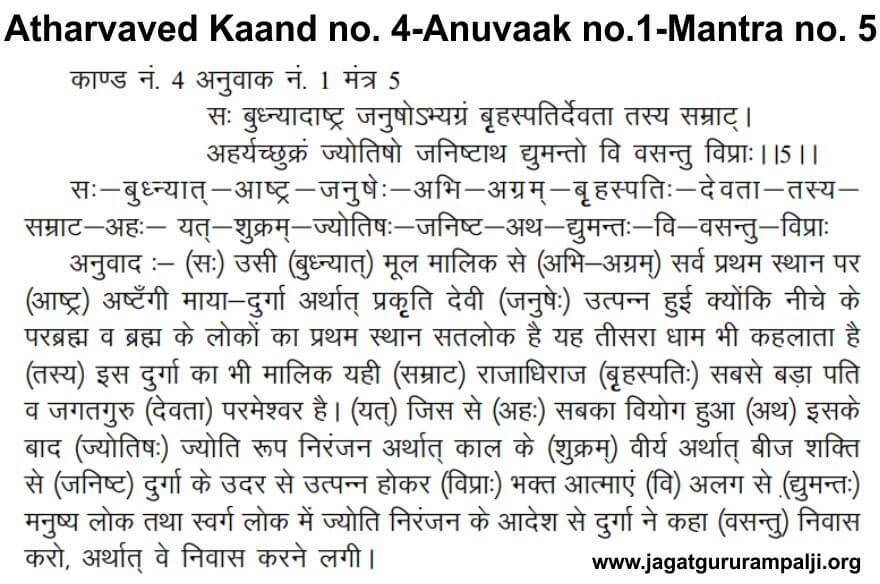 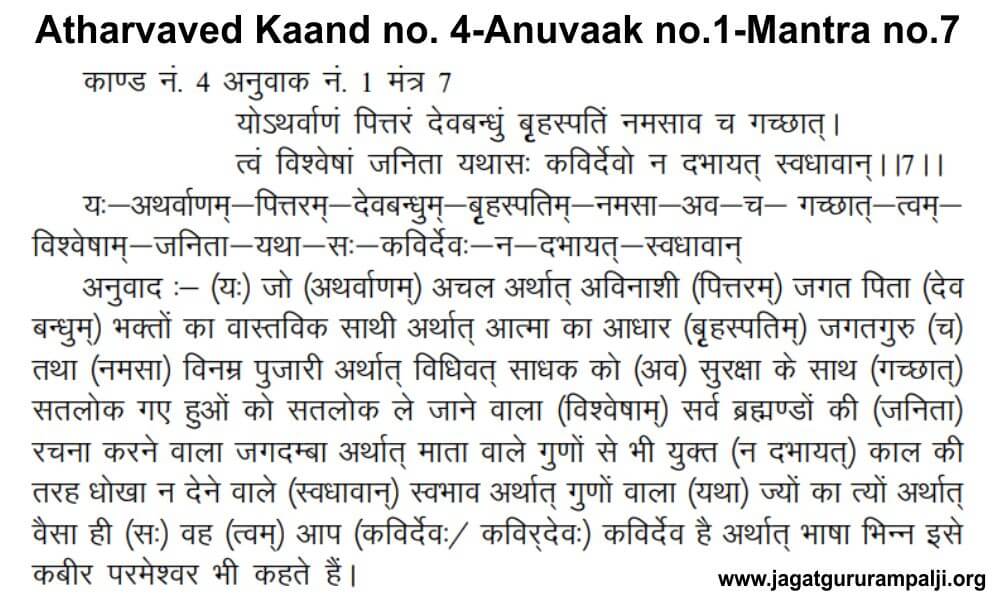 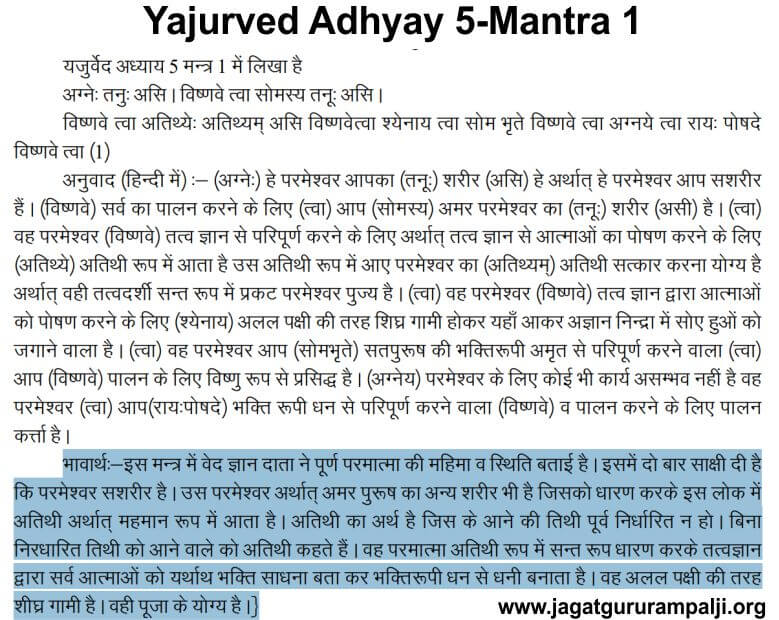 Creation of Universe According to Islam

Creation of Universe According to Holy Bible

The followers of Christianity believe God is the creator of the universe and God is formless.

Creation of Universe According to Sikhism

The followers of Sikhism believe Rab/ God is the creator of the universe and He is ‘Niraakar/Formless. They say ‘Onkaar-Nirakaar

Creation of the universe according to Science / The Big Bang Theory

Science explains the Universe is all about space and time which includes planets, stars, galaxies etc but does not have concrete information regarding the spatial size of the entire universe. At most science gives some figures based on observable universe which is estimated to be 93 billion light-years in diameter. This information is based on the cosmological model developed by ancient Greek and Indian Philosophers, some heliocentric model. This is the law of universal gravitation developed by Isac Newton and Copernicus and Johannes Kepler’s law of planetary motion and the observations by Tycho Brahe.

The Big Bang theory is considered to be the most prevalent description about the creation of the universe which explains that space and time emerged together 13.799 +/- 0.021 billion years ago and because of the inflationary epoch, some expansion of the particles happened which gradually cooled and it continued to expand with which subatomic particles and atoms were formed.

The ACDM model is the most widely accepted model of the universe according to science. There are many theories competing about the ultimate creation of the universe where even Physicists and Philosophers refuse to contemplate and they doubt if this information could ever be accessible. Scientists also talk about the multiverse hypothesis, where our earth/universe could be one among several universes that possibly exist.

These are all merely anticipations and baseless concepts. Their knowledge (Whatsoever) is confined until the creation of the earth. Whereas the sacred knowledge is given by Supreme God Kabir (Kavir Dev) Himself tells about the universe creation which is even beyond this earth and describes creation of the whole universe/Solar system/infinite Brahamands.

How the Universe/World was created?

In the beginning, there was only one God. His name is God Kabir. The actual name of that God is ‘Kavirdev’. He used to reside in a place called ‘Anami (Anamay) Lok (region) Which is also called ‘Akah Lok. The Almighty GOD the creator of the universe (Brahamands) used to reside all alone there. Vedas address Him as ‘Kavirdev’and Quran as ‘Kabiran’. He is in the shape of a human. His body is very effulgent. All the souls (Atma) were contained in the body of that complete GOD (Purna Dhani) whose designated name is Anami Purush (Purush means God since God has created man in His form/image, similar to His own self, therefore, man is also known as ‘Purush’). In the same way, the Supreme God Kabir (Almighty KavirDev) himself appeared and created three other lower regions/places (Lok). The effulgence of one hair follicle of the Almighty God KavirDev (ie. Anami Purush) is more than the combined light of Sankh (Calculation) Suns.

The Almighty God (KavirDev) later created Agam Lok, Alakh Lok and Satlok (these are the lower loks) with his word power (Shabd Shakti). The Almighty God (KavirDev) himself then appeared in Agam Lok as the Master (Lord) of Agam Lok. His title (position) there is Agam Purush ie. Agam Prabhu. Agam God’s human-like visible body is highly illuminated. The effulgence of whose one hair follicle is more than the combined light of Kharab Suns.

The Almighty God (KavirDev or Supreme God Kabir) himself then appeared in Alakh Lok as the Master (Lord) of Alakh Lok. His title (position) there is Alakh Purush’. Alakh God’s human-like visible body is self-illuminated, its very bright (swarjyoti). The effulgence of one hair follicle of His body is more than the combined light of Arab Suns.

This very Supreme God only appeared in ‘Satlok’ and there He himself is the master (Lord) of Satlok. His title (position) there is SatPurush (the Eternal/Immortal God). In fact, He only is known as Akaalmurti-Shabad Swaroopi Ram’ or calls Him Purna Brahm or Param Akshar Brahm. This SatPurush (God Kabir) KavirDev’s human-like visible body is highly illuminated and the brightness of one hair follicle is more than the combined light of crore Suns.

While appearing in the form of SatPurush (God Kabir-KavirDev) first did other creations in Satlok. With His word power (one Shabd) He created sixteen islands (dweeps). Then with sixteen words (Shabd), He made evident sixteen sons. He also created Mansarover (a very big lake) and He filled it with nectar. The names of His sixteen sons:-

The Eternal God (SatPurush) amongst sixteen sons then entrusted Achint for the rest of Universe creation. He was given the order to create the creation and was provided the word power. With that word power Achint created ‘Akshar Purush (Param Brahm) with the word (Shabd) and asked him to help him in further creations in Satlok. Akshar Purush ie. this ParBrahm went to Mansarover (the lake filled with nectar) in Satlok to take bath there he started enjoying it and he fell asleep. He stayed there for a very long time and did not come out. In Satlok the body is not made up of five elements, there the life is not through breathing. Then Achint requested the Almighty God KavirDev to awake Akshar Purush from sleep. The Supreme GOD Kabir took some nectar from that Mansarover and made an egg out of it. In that egg, He inserted a soul and renounced that egg in the nectar water of Mansarover. The egg started sinking and its thunder-like voice disturbed the sound sleep of Akshar Purush and his sleep repealed due to which he got annoyed, he stared that egg with anger as ‘Who disturbed my sleep? Due to which the egg broke into two halves. From this egg came out this Brahm, a ‘Purush’ ie. Jyoti Swaroopi Niranjan (Kshar Purush). His real name is ‘Kael’ who later was known as ‘Kaal’. Then Satpurush (KavirDev) uttered Oracle (Aakashvaani) ‘You both come out, Akshar Purush you were in sleep, without you the creation work is not getting completed. In order to wake you, all this process is done and now both of you live in Achint’s dweep (Lok). Following the instructions of the Almighty God, both Akshar Purush and Kshar Purush (Kaal) started living in Achint’s dweep for a very long time. (This spectacle was done by God Kabir to teach them that without the Almighty nothing can be successful and also these foolish children should not crave for power).

Then the Supreme God KavirDev himself did entire creation with His word power (Shabd shakti). He created a Rajeshwari (Rashtri) Shakti with which all these Brahamands (elliptical regions) were established. This is also known as Parashakti / Paranandni. The Almighty KavirDev (Supreme God) then produced all the souls after this with His word power in His own form, in human form, the body of each soul is similar to God himself and the brightness of the body is equivalent to that of sixteen suns.

After a long time, mischief aroused in the mind of Kshar Purush (Jyoti Niranjan) that we three (Achint, Akshar Purush/Brahm and Kshar Purush) are living in one island (dweep) whereas all others are living independently in their own separate dweeps. Having this thought and with an aspiration to have a separate dweep (island/state) for himself this Jyoti Niranjan (Kshar Purush) decided to do religious austerity and by standing on one leg for seventy (70) yugas (ages) he did tenacity (Tap / meditation)...(See More...)

A mention of ParBrahm (Akshar Purush) is given in Kabir Sagar who due to committing a breach in his duty and showing anger for Kshar Purush (Jyoti Niranjan) was expelled from Satlok. After Kshar Purush departed from Satlok, this ParBrahm started missing his friend Brahm forgetting the Almighty Kavir Dev who is the giver of all pleasures and comforts. Since his yearning did not lessen, it became mandatory for Supreme God Kabir to expel him as well.

In this way, the beautiful creation of nature / world / Universe was done of ParBrahm’s Seven
Sankh Brahamands and the life dwelled in these 21 Brahamands of Kshar Purush, Jyoti Niranjan-Kaal. This is how the Universe / world was created. This is the origin of the Universe.

The information provided is absolutely authentic. All the facts provided are the outcome of deep research done from Pious Rigved, Pious Yajurved, Pious Atharvaveda, Pious Shreemad Bhagwat Gita, Holy Quran Shariff, Holy Bible, Pious Gurugranth Saheb, Pious Sukshamved, Pious Kabir Sagar, Pious Puran, Pious Upanishads, Pious Bhavishya Puran (Futuristic Mythology), The Big Bang Theory etc.. Whereas the theories provided by all others regarding the creation of universe includes a range
of viewpoints which are baseless. There is dynamic diversity in all religions, even in Science.

Universe Information: What is Universe? (Creation of Nature) >> Next