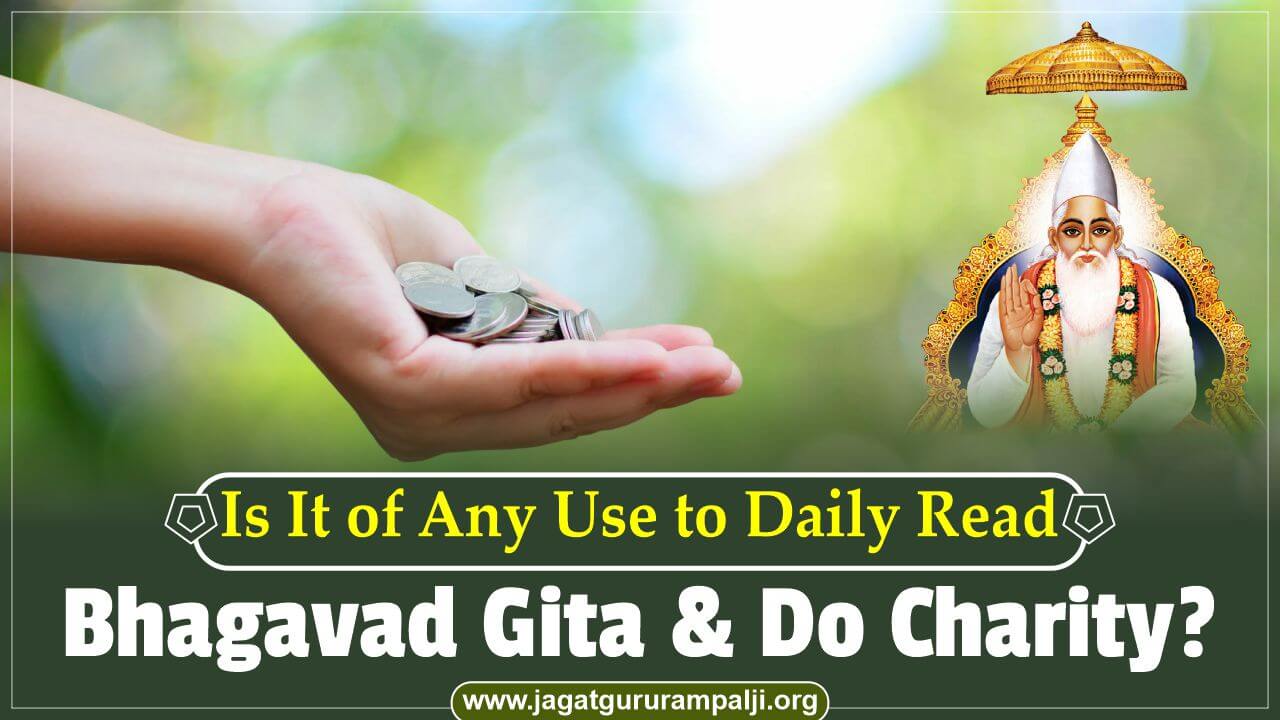 Question: Is there no benefit of doing a daily paath (reading) of Gita Ji? The charity which we do like, giving roti (bread) to a dog, food to a hungry man, flour to the ants, bhandara (common meal) on the places of pilgrimages etc; is this also useless?

The main reason for doing a daily paath is that the memory of the worship, which is instructed in the Holy Scriptures and that which is not instructed, remains fresh. And we do not make a mistake at any time. As a result of which we giving up the actual aim through negligence and abandoning the ordinances of scriptures do not start following arbitrary behaviour (way of worship), and the main aim of human life remains in mind that the sole aim of human life is only self-welfare, which is only possible by scripture-based worship.

For example, a farmer obtained a son in old age. The farmer thought, by the time the child will grow up and will become capable of taking the responsibility of the occupation of agriculture, I might die. Therefore, the farmer wrote down his experience and said to his son, "Son, when you grow up, then to understand your work of farming, read this record of the experience of mine daily and do your farming." After the death of the father, the farmer's son everyday read the record of the experience written by his father, but is not doing as is written in it. Can that farmer's son become rich? Never. He should do the same as is written in his father's experience record.

Similarly, the devout people are everyday doing the paath of Holy Gita Ji, but are doing worship opposite to the holy text. Therefore, according to Gita Adhyay 16 Shlok 23, 24, it is a futile worship.

For example, the worship of the three gunas (Rajgun-Brahma, Satgun-Vishnu and Tamgun-Shiv) is prohibited in Adhyay 7 Shlok 12 to 15 and 20 to 23, and to carry out shraadhs i.e. pitra-worship, to offer pind, to pick up ashes and perform kriya (rites) in Ganga, to perform terahvin, satarhvin, mahina, chhHmahi, barsi etc is prohibited in Adhyay 9 Shlok 25. To keep fast is prohibited in Gita Adhyay 6 Shlok 16. It is written that Oh Arjun! Yog (bhakti) is neither successful of a person who does not eat at all (who keep fasts),……. i.e. fasting is prohibited.

To give food to the hungry people, to feed dogs etc living creatures and animals etc is not bad, but it is beneficial only to do charity and yagya etc through a Complete Saint according to his orders.

For example, There are some cases where a dog travels in a car sitting in his master's seat and man is the driver of the dog. That animal has more facilities than a common man. A separate room, fan and cooler are available etc-etc. The reason is that when that ignorant creature was in a human body, he did charity also, but he did it through arbitrary conduct (way of worship), which because of being opposite to the scriptures was not beneficial. However it is a rule of God that whatever deed a living being will perform, he will definitely get its result. This rule is applicable until one finds a Tatvdarshi Saint.

Whatever deed a living being performs, he gets the result accordingly. According to this rule, by doing bhandara on the places of pilgrimage and on other places and on the basis of the act of giving roti to a dog, he went into the life of a dog. There also he got the result of the actions performed. After finishing the earnings of the virtuous deeds of the previous birth in the life of the dog, he may go into the life of a donkey. In that case all the facilities will be taken away in the life of a donkey; will carry mud and bricks the whole day. Thereafter, will suffer in the bodies of other living beings and will have to suffer in hell too. After experiencing the sufferings of 84 lakh births of various living beings, then will attain a human body. Then who knows whether he will do bhakti or not.

Like, the sin of the living beings, which are killed under the feet of the person who goes to places of pilgrimage or under the wheels of the conveyance he uses, is also borne by that pilgrim only. Until the Complete Saint who tells the true worship of the Supreme God is found, the sins can not be destroyed (forgiven), because by the worship of Brahma, Vishnu, Shiv, Brahm (Kshar Purush/Kaal) and ParBrahm (Akshar Purush) sins are not destroyed (forgiven); the fruit of both the sin and the virtue has to be borne.

If that living being, according to the knowledge of Gita, obtaining the refuge of a Complete Saint, had done worship of the Supreme God, then either he would have gone to Satlok or would have again obtained a human body. On the basis of the previous virtues would have found some Saint. That living being then by performing virtuous deeds would have got across.

Therefore the above-mentioned arbitrary practice is not beneficial.

← What is the Definition of Heaven       Is it true that one's own religion, even if devoid of merits, is better than other's religion →