Can one attain Peace by doing Meditation & keeping Fasts 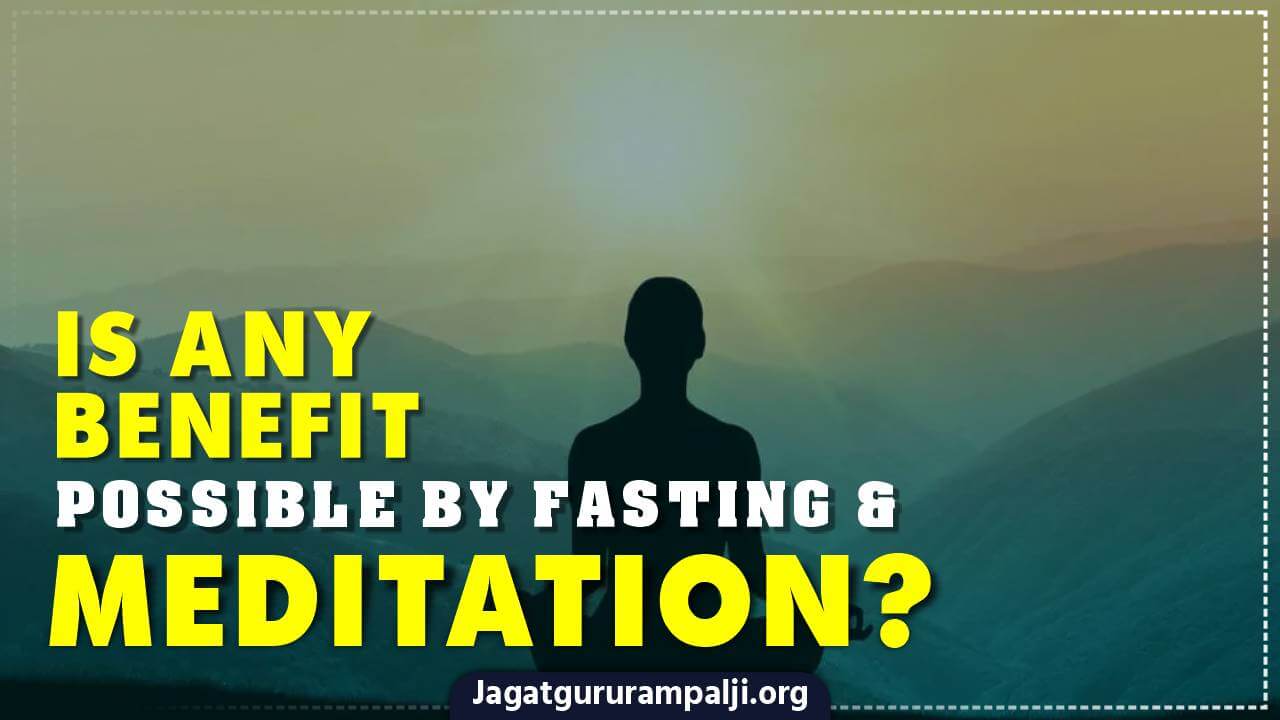 Question: According to the method mentioned in Gita Adhyay 6 Shlok 10 to 15, I meditate by sitting on one seat and bringing the head and other parts into equilibrium. I also keep the fast of Ekadashi. In this way I will attain peace.

Answer: You may please also read Gita Adhyay 6 Shlok 16 in which it is written that oh Arjun, this yog (sadhna) is neither successful of a person who eats excessively, nor of one who does not eat at all (keeps fast). It is neither successful of a person who remains too much awake, nor of one who sleeps a lot, nor is successful of a person who does sadhna by sitting in one place. The method mentioned in Gita Adhyay 6 Shlok 10 to 15 has been refuted in Gita Adhyay 3 Shlok 5 to 9 that a foolish person, who forcefully controlling all the senses of action i.e. by sitting in one place, meditates, he is called a hypocrite. Therefore only a karmyogi (a worshipper who does worship while doing work) is superior. For the real method of bhakti, God (Brahm), the giver of the knowledge of Gita, says about searching some Tatvdarshi (Gita Adhyay 4 Shlok 34). It is evident from this that the method of bhakti told by (Brahm) the giver of the knowledge of Gita is not complete. Therefore in Gita Adhyay 6 Shlok 10 to 15, Brahm (Kshar Purush / Kaal) has described his own way of worship and has described the peace attained from his worship to be very bad (anuttamam ) in Gita Adhyay 7 Shlok 18. It has been said in the above-mentioned Adhyay 6 Shlok 10 to 15 that a worshipper who keeps mind and senses under control, may prepare a special seat which should neither be too high, nor too low. Sitting on that seat, keeping heart and senses under control, must practice by focussing mind. Sitting upright, by observing celibacy, and controlling mind, one must depart. Engrossed in sadhna in this way, a worshipper attains the (Nirvanparmam ) lifeless (nominal) peace residing in me. Therefore in Gita Adhyay 7 Shlok 18, has called the salvation (benefit) attained by his worship to be very inferior (anuttamam ). In this very Gita Adhyay 18 Shlok 62 and Adhyay 15 Shlok 4, he has said that oh Arjun! You will attain supreme peace and Satlok; then one does not have rebirth, attains complete salvation. Even I (God, the giver of the knowledge of Gita) am in the refuge of that Primordial Supreme God . Therefore, one should only do His worship with firm determination.

In Adhyay 6 Shlok 47, he has himself described the path directed on the basis of the conjectural knowledge of his way of worship as (yuktatamH matH) the viewpoints of the darkness of ignorance. The other translators have done the meaning of 'Me yuktatamH matH' to be 'is acceptable as most superior', whereas, they should have done it as - this is my conjectural opinion based on the darkness of ignorance. Because about the true knowledge, he has advised to ask some Tatvdarshi Saint (Gita Adhyay 4 Shlok 34). The actual translation of Gita Adhyay 6 Shlok 47 -

Translation: The conjectural viewpoint on bhakti which I have given in Shloks 10 to 15, the estimated way of worship which I have mentioned, is not complete knowledge, because (Sarveshaam ) all (yoginaam ) among worshippers (yaH) he who (shraddhaavaan ) with full faith (antaraatmna) with full determination (mad gaten) according to the bhakti-opinion given by me (maam ) me (bhajte) worships (saH) he (api) also (yuktatamH) due to the darkness of ignorance, is engrossed in the worship of birth-death and heaven-hell. (me) my (matH) this is opinion. (47)

Translation: The conjectural viewpoint on bhakti which I have given in Shloks 10 to 15, the estimated way of worship which I have mentioned, is not complete knowledge, because amongst all the worshippers he who worships me with full faith, full determination according to the bhakti-opinion given by me, he, due to the darkness of ignorance, is also engrossed in the worship of birth-death and heaven-hell. This is my opinion. 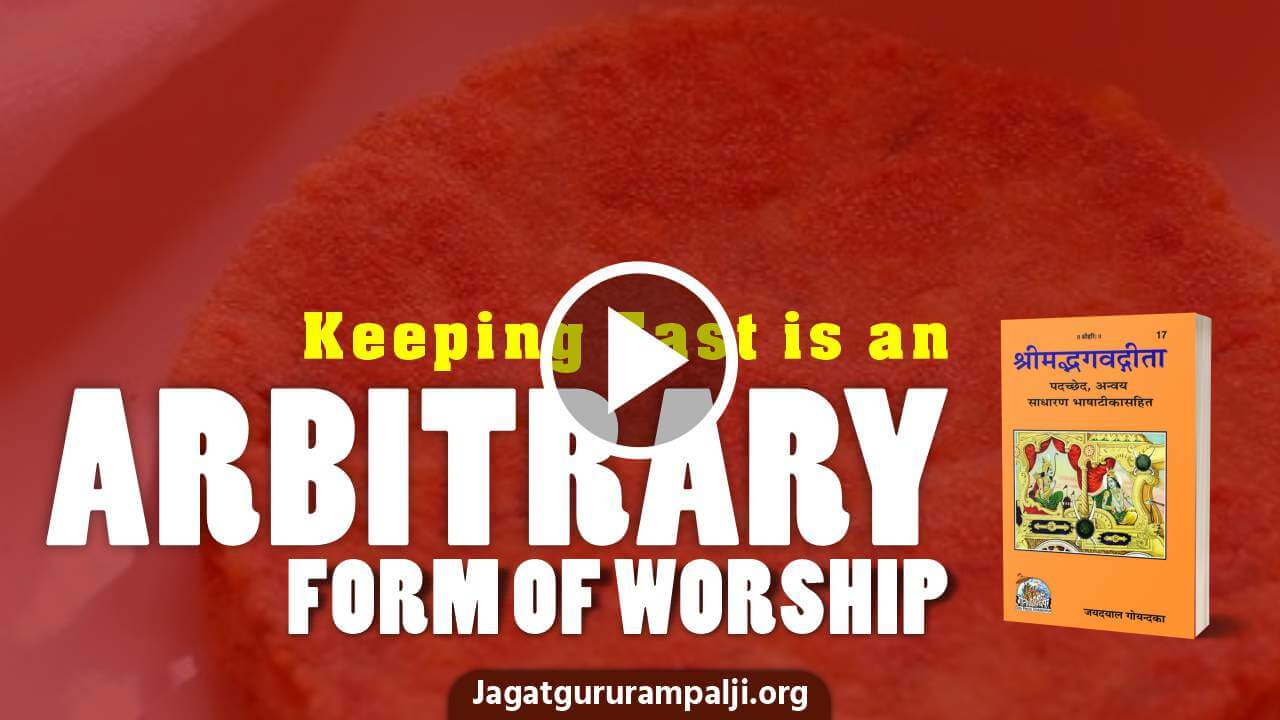 Even in Gita Adhyay 3 Shlok 5 to 9, he has proved the knowledge of Gita Adhyay 6 Shlok 10 to 15 to be wrong. Arjun asked, "God, it is very difficult to control mind." God answered, "Arjun, controlling mind is like controlling wind." Then, he has also said this that undoubtedly nobody remains without doing any action even for a moment at any time. A very foolish person forcefully controlling all the senses of action externally, keeps thinking something in the mind. Therefore instead of sitting in one place by observing hathyog, it is superior to sadhna (karmyog) while performing worldly tasks. Compared to not doing action i.e. doing sadhna with hath-yog1 by sitting in one place, it is superior to do sadhna while doing actions. How will you subsist yourself by doing sadhna while sitting in one place (Akarmna)? Doing sadhna (by sitting in one seat with hathyog) by abandoning the ordinances of scriptures is a cause of bondage to actions. Secondly, it is superior only to do sadhna while performing actions in accordance with the scriptures. Therefore, do sadhna while performing your worldly tasks. In Gita Adhyay 8 Shlok 7, has said that, fight as well as do my sumiran. In this way, you will come to me only. In Gita Adhyay 7 Shlok 18 and Adhyay 18 Shlok 62, has said that the benefit (salvation) obtained from my sadhna is very inferior/bad (Anuttamam ). Therefore, go in the refuge of that Supreme God, by whose grace you will attain supreme peace and (Shaashvatam Sthanm ) Eternal Place i.e. Satlok. Search for some Tatvdarshi Saint and ask him the method of bhakti and the complete knowledge (Tatvgyan) of that Supreme God; even I (Brahm / Kshar Purush, the giver of the knowledge of Gita) do not know it.

← Is it true that one's own religion, even if devoid of merits, is better than other's religion       Is the Speaker of Shrimad Bhagavad Gita Supreme God? →