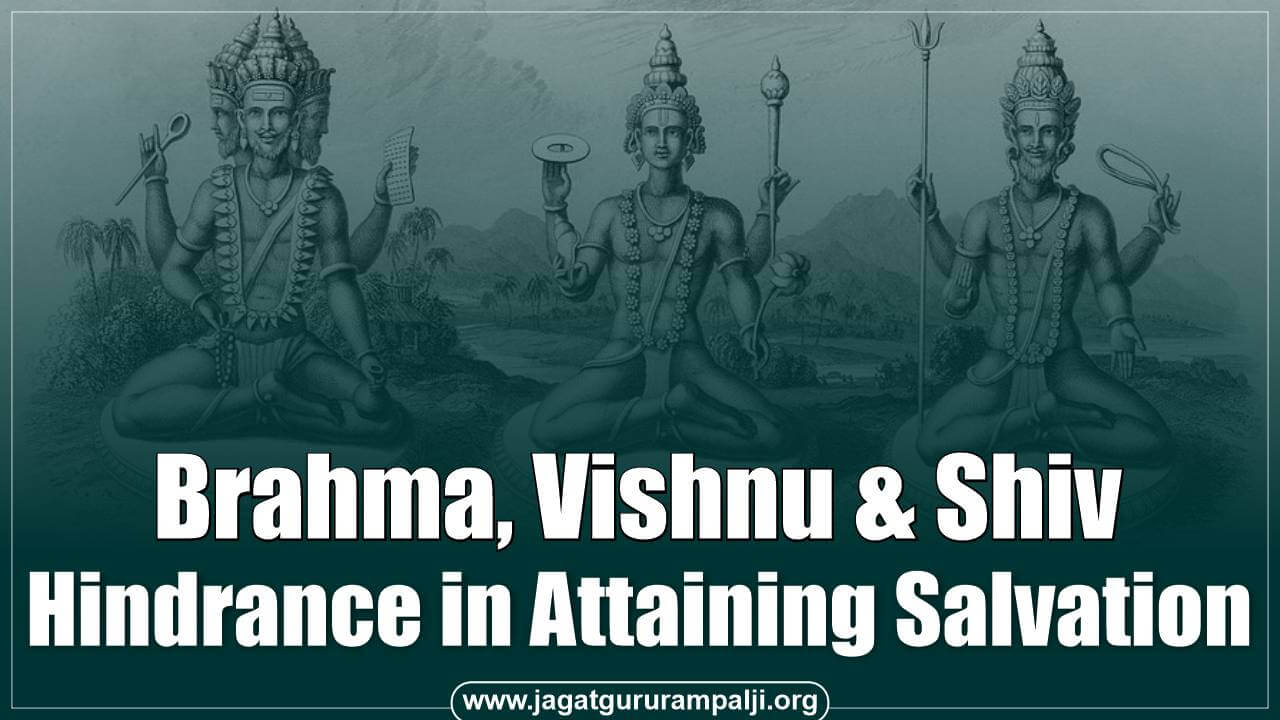 Trigun Maya, Rajgun Brahma Ji, Satgun Vishnu Ji and Tamgun Shiv Ji, do not let a Living Being Get Liberated

In Holy Gita Adhyay 7 Shlok 1 and 2, Brahm is saying that Arjun! Now I will narrate that knowledge to you, after knowing which there does not remain anything else to be known.

Bhagavad Gita Adhyay 7 Shlok 12: The giver of the knowledge of Gita, Brahm (Kshar Purush / Kaal) is saying that whatever is happening from the three gunas, consider it to be happening from me only. Like, the cause of the act of production by Rajgun (Brahma), preservation by Satgun (Vishnu) and destruction by Tamgun (Shiv) is Kaal God only. Then he has said that I do not exist in them.

Kaal is quite far away (resides in the twenty-first brahmand in his personal lok) but he only enjoys in the form of mann (mind) and operates all the living beings and Brahma, Vishnu and Shiv like operating a machine through a remote.

The narrator of Gita, Brahm, is saying that for the living beings of my twenty-one brahmands the scripture-based worship begins from my worship only, which is mentioned in the Vedas. The intellect of all the living beings, who are under me, is in my hand. I am the master only in the twenty-one brahmands. Therefore (Gita Adhyay 7 from Shlok 12 to 15) whatever is happening from the three gunas (production of living beings by Rajgun-Brahma, preservation by Satgun-Vishnu, and destruction by Tamgun-Shiv) I (Brahm / Kaal) only am its main cause. (Because Kaal has the curse of killing one lakh human beings and eating their grime). Those worshippers who, instead of doing my (Brahm’s) worship, by performing worship of the Trigunmayi Maya (Rajgun-Brahma, Satgun-Vishnu, and Tamgun-Shiv) obtain the shortlived benefits, consequently suffer more. Besides, has indicated that I (Brahm-Kaal) can give more benefits than these, but these foolish worshippers because of absence of Tattavgyan (True spiritual knowledge) keep doing worship only upto these three gunas (Rajgun-Brahma, Satgun-Vishnu, and Tamgun-Shiv). Their intellect is limited to only these three gods. Therefore these with demoniac nature, lowest among men, who perform evil acts like doing worship opposite to the scriptures, fools do not worship me (Brahm). This evidence is also in Gita Adhyay 16 Shlok 4 to 20 and 23, 24; Adhyay 17 Shlok 2 to 14 and 19 and 20.

Ravan did bhakti considering God Shiv Ji as Mrityunjay (one who has won over death), ajar-amar (immortal), and Sarveshwar (Lord of all, the Supreme Being); offered his head by beheading himself ten times. In return for which, Ravan obtained ten heads during the battle, but did not get liberated; rather, came to be known as a demon. This fault is of Ravan’s Guru. That fool (a quack) did not understand the Vedas properly and from his own thought, described God Shiv only as the Supreme God, and the innocent soul, Ravan, trusted his fake Guru and ruined his life and family.

1. There was a devotee named Bhasmagiri, who, regarding Shiv Ji (Tamgun) as his deity, did worship for 12 years in head-stand. He bound Shiv Ji with a promise and obtained bhasmkanda (a bracelet which when kept over someone’s head turns that person into ashes on saying ‘Bhasm’). Then he tried to kill God Shiv only. The aim was that after obtaining bhasmkanda, I will kill God Shiv Ji and make Parvati Ji my wife. God Shiv Ji ran in fear. Then Vishnu Ji made that Bhasmasur do Gandath dance and turned him into ashes with the same bhasmkanda. Again, that worshipper of Shiv (Tamgun) came to be known as a demon.

Likewise Hrinyakshipu worshipped God Brahma Ji (Rajgun) and came to be known as a demon.

2. Once upon a time, around 335 years ago from today (year 2006) there was an occasion of Kumbh festival (of those who do sadhna opposite to the injunctions of the scriptures) on the steps of Har in the old Haridwar. All the sages (worshippers of the Trigun/ three gunas) reached there to take bath. Giri, Puri, Naath, Naga etc are the worshippers of God Shiv (Tamgun), and Vaishno are the worshippers of God Shri Vishnu Ji (Satgun). An intense fight broke between Naga and Vaishno sages on the issue of taking bath first. Approximately 25000 (twenty-five thousand) Trigun worshippers (of the three gunas) died.

Please think yourself that a person who can cause a massacre on a trivial matter is a saint or a demon. If even an ordinary man is taking bath somewhere and someone comes and requests for some place to bathe, then for the sake of courtesy, one normally says, “Come, you also take bath here”, and try to accommodate the other person. Therefore in Holy Gita Adhyay 7 Shlok 12 to 15, it is said that those whose knowledge has been stolen by the worship of my Trigunmayi Maya (Rajgun-Brahma, Satgun- Vishnu, and Tamgun-Shiv), they, hungry of only pride and praise, equipped with demoniac nature, the lowest among men i.e. their conduct is even worse than a common man, miscreants, fools, do not even worship me.

In Bhagavad Gita Adhyay 7 Shlok 16 to 18, God (Brahm), who is the narrator of Holy Gita, is saying that four types of worshippers do my worship (Brahm-sadhna).

First are Artharthi (who desire for wealth), who keep doing jantra-mantra and hawan etc by Ved mantras only.

Second, Aart, who keep doing jantra-mantra and hawan by Ved mantras to ward off misfortunes.

Third, Jigyasu, who desire to know the knowledge of God, and who only by accumulating knowledge become speakers, and on the basis of excellence in knowledge become superior to others, become learned and because of arrogance become devoid of bhakti.

Fourth are Gyani; those devotees who have come to know that one does not get a human body again and again. If one does not do worship of God in this, then life will go in vain. Then they read the Vedas, from which came to know that above the three gunas (Brahma-Vishnu-Shiv), Brahm (Kshar Purush) and ParBrahm (Akshar Purush) is Purna Brahm, and one should only do His worship and not of the other gods. Those knowledgeable, noble souls like me and I like them because rising above the three gunas (Rajgun-Brahma, Satgun-Vishnu, Tamgun-Shiv Ji) atleast they started doing my (Brahm) worship, which is better than that of the other gods, but the learned men, who read Vedas, based on their own discussions considering ‘Om’ naam mentioned in the Vedas, which is the mantra only for the worship of Brahm, to be that of the Purna Brahm, kept doing sadhna for years. They did not attain God, but attained other supernatural powers. Because they did not find the Tattavdarshi saint mentioned in Holy Gita Adhyay 4 Shlok 34 and in Holy Yajurved Adhyay 40 Mantra 10, who tells about the worship of Purna Brahm with three mantras; therefore, even the Gyanis by doing Brahm (Kaal) worship remained in the cycle of birth and death.

A learned, noble soul Maharishi Chunak Ji read the Vedas and considering ‘Om’ to be the mantra for bhakti of one Supreme God, did sadhna for years by doing jaap of this naam. There was a Mandhata Chakravarti king (a Chakravarti king is one who rules over the whole Earth). He challenged the kings under him to fight. He tied a signboard in the neck of a horse and showed it around the entire kingdom. The condition was that he who does not accept the subjection to king Mandhata will have to fight. He should capture this horse. Nobody captured the horse. Maharishi Chunak Ji became aware of this that the king has become very arrogant. He said that I accept the fight with this king. The fight started. Mandhata King had an army of 72 crore soldiers. He divided it into four parts and attacked Maharishi Chunak with one division (18 crore soldiers) of the army. On the other hand, Chunak Ji made four bombs out of his earnings of sadhna and destroyed all the four divisions of army of the king.

Important: By bhakti of Brahma, Vishnu, Shiv, Brahm and ParBrahm, one has to bear the fruits of both sins as well as the virtuous deeds; virtuous deeds in heaven and sins in hell and has to bear numerous sufferings in the bodies of 84 lakh life forms. For instance, the earnings of recitation of ‘Om’ naam which the learned soul Shri Chunak Ji collected, out of that he finished some in supernatural power (by forming four bombs); as a result of which was known as Maharishi. After bearing the fruit of some worship in Great Heaven will then go to hell, and then will bear hardships one after another by acquiring the bodies of the 84 lakh species of life.

And he will also have to bear the result of the killings of 72 crore soldiers, whom he had killed by power of his word. Whether one kills someone with a weapon or with word-like sword, God gives equal punishment to both. When that Maharishi Chunak’s soul will be in the body of a dog, he will have wounds in his head, and the souls of those soldiers will become worms and take their revenge by infesting it. Sometimes his leg will break and sometimes his hind limbs will become paralysed and will only drag with forelimbs, and will definitely have to bear the sufferings of heat and cold and intolerable pain in different ways.

Hence, Brahm (Kaal), the narrator of Holy Gita, is himself saying in Gita Adhyay 7 Shlok 18 that all these knowledgeable souls are as-such noble, but, because of not finding the Tattavdarshi Saint who tells about the true worship of the three mantras of the Supreme God, all these remained dependent on the hope of attaining only my (anuttamam) inferior most salvation (state); which means, even my worship is inferior/bad. Therefore, in Holy Gita Adhyay 18 Shlok 62, has said that, oh Arjun! Go in the refuge of that Supreme God in every respect. By only His grace, you will attain supreme peace and eternal, supreme abode (Satlok).

Brahm (Kaal) narrated the Holy Gita Ji by entering into Shri Krishna’s body in a ghost-like manner. Then, several years later, Brahm (Kshar Purush) himself wrote Holy Gita and Holy four Vedas by entering like a ghost into Maharishi Vyas Ji’s body. In these, the knowledge of – how does God look like, how to do His bhakti and what will one achieve – is complete. But the way of worship is only upto Brahm (Kshar Purush) i.e. Jyoti Niranjan / Kaal.

For the bhakti of Purna Brahm (Supreme God), in Holy Gita Adhyay 4 Shlok 34, God (Brahm), the narrator of Holy Gita, is himself stating that for the bhakti of and for attaining the Supreme God, find a Tattavdarshi Saint. And then whatever he tells, do accordingly. God, the narrator of Holy Gita, is saying that I do not know the complete knowledge and the method of doing bhakti of the Purna Parmatma. Regarding his own sadhna, he has said in Gita Adhyay 8 Shlok 13 that ‘Om’ is the only one word for my bhakti. By chanting it unto the last breath (tyajan’ deham) you will attain my ultimate salvation. Then in Gita Adhyay 7 Shlok 18, he has said that the God-loving souls, who did not find a Tattavdarshi saint who knows the sadhna of the Purna Brahm, those noble souls are dependent on my inferior most ultimate salvation. (God, the narrator of Holy Gita Ji, is himself saying that the salvation i.e. liberation obtained from my worship is also very bad / most inferior).

← What is the Essence of Shrimad Bhagavad Gita?       Only Foolish People Worship other gods (Rajgun Brahma, Satgun Vishnu, & Tamgun Shiv) →