Indication of the Origin of Brahm (Kaal), the Giver of the Knowledge of Gita 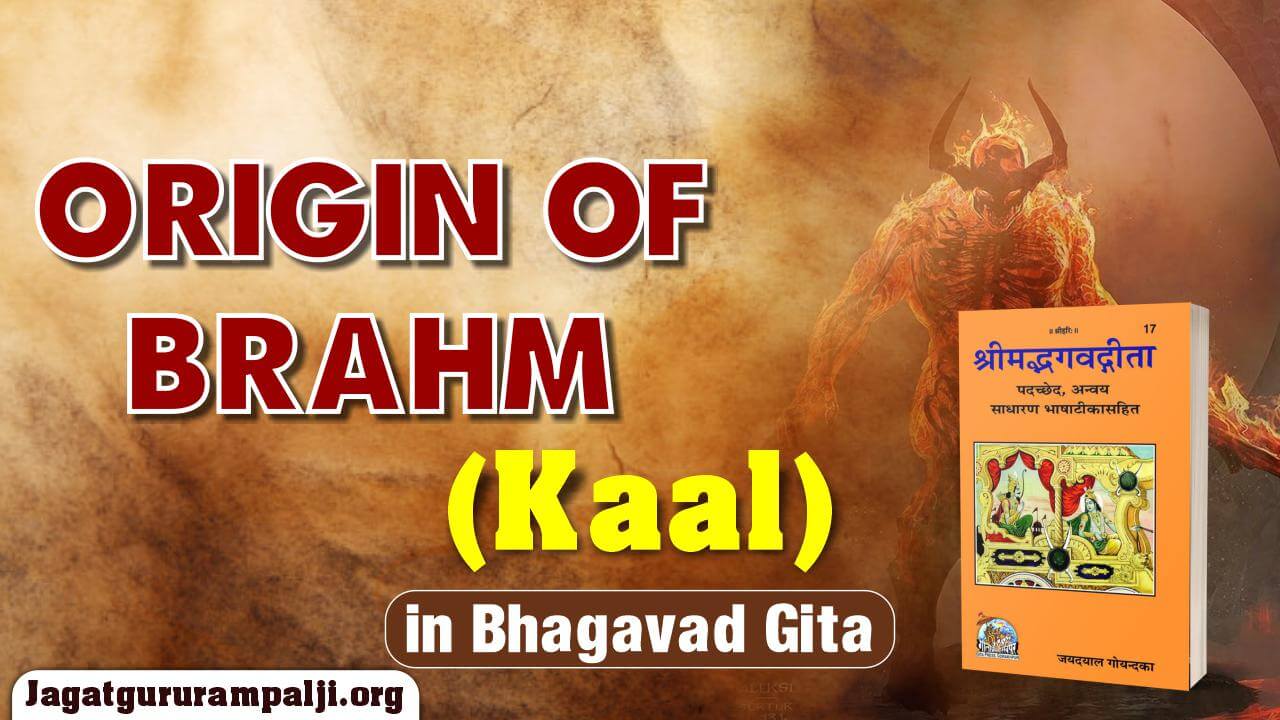 It has been stated in Adhyay 10 Shlok 2 that Arjun, neither the gods, nor the great sages know about my origin (birth) because all these have originated from me. It is self-evident from this that Brahm (Kaal) has definitely taken birth, but the gods and the sages do not know about it. Like, children can not tell about the birth of their father, but the grandfather knows about it. Similarly, all the gods-sages etc in the twenty-one brahmands have originated from the union of Jyoti Niranjan / Brahm i.e. Kaal and Prakriti (Durga). Therefore, he is saying that no one in the twenty-one brahmands knows about my origin because everyone has originated from me. Only Purna Brahm can tell about the origin of Kaal (Brahm) because Brahm (Kaal) has originated from Param Akshar Brahm (Purna Brahm). In Gita Ji Adhyay 3 Shlok 14-15, there is a clear evidence of origin of Brahm.

Adhyay 10 Shlok 3: A Tatvdarshi i.e. a learned person who knows me (Brahm) and the Greatest God of all the loks, who never takes birth i.e. the Eternal God, he knows the three Vedas (Rigved, Samved and Yajurved); he is a Tatvdarshi Saint. By doing sadhna according to the path of bhakti directed by him, all the sins get destroyed. It is mentioned in Gita Ji Adhyay 15 Shlok 16, 17, 18 that the Imperishable/Eternal Supreme God is someone else, who by entering into the three loks sustains everyone. I (Kaal) am called Purushottam, only because I am superior to the perishable living beings in material bodies and the imperishable soul under me in the twenty-one brahmands. Therefore, I have been called Purushottam on the basis of lokved i.e. baseless stories, but actually I am not imperishable/eternal or the sustainer. In Gita ji Adhyay 3 Shlok 14, 15, it is said that all the living beings arise from food grain, food grain arise from rain, rain arises from yagya, yagya from auspicious actions, actions arose from Brahm. Brahm originated from the Eternal God. That very Eternal Omnipresent God is situated in the yagyas, is worshippable in the yagyas; He only gives the fruits of the yagyas i.e. in reality, He only is the Adhiyagya.

Then, has said in Gita Adhyay 10 Shlok 2 that no one knows about my origin (prbhavam ). It is proved from this that even Kaal (Brahm) has taken birth. Therefore he is also in form somewhere. Otherwise, Krishna ji was already standing in front of Arjun. He could not say that I am immemorial and unborn (ajam ). Kaal (invisible Brahm) only delivered all this correct information about his position (state) in the form of Gita by entering (like a ghost) into Sri Krishna's body and speaking from inside.

It has been proved in Gita Ji from the above-mentioned description that Brahm has originated from Purna Brahm. This evidence is also in Atharvaved Kaand 4 Anuvaak 1 Mantra 3, please read below -

Translation: (Pr) first of all (devaanaam ) of the gods and the brahmands (jagye) the knowledge of the origin (vidwaanasya) of a curious devotee (yaH) who (bandhuH) the real companion i.e. Supreme God only, to His personal servant (janima) whatever has been created by Him (vivakti) Himself tells correctly in detail that (BrahmnH) Supreme God (madhyaat ) from within Him i.e. by word power (BrahmH) Brahm / Kshar Purush i.e. Kaal (ujjbhaar) by giving rise to (vishwa) the whole world i.e. all the loks (uchchaeH) above Satyalok etc (nichaeH) below all the brahmands of ParBrahm and Brahm (swadhaa) by His acquirable (abhiH) attractive force (pr tasthau) properly established both of them.

Translation: Supreme God who is the real companion of a curious devotee, first of all, Himself correctly tells in detail the knowledge of the origin of the gods and the brahmands and whatever has been created by Him to His personal servant (disciple) that, Supreme God, giving rise to Brahm / Kshar Purush i.e. Kaal from within Him i.e. by His word power, properly established the whole world i.e. all the loks, both the Satyalok etc above and all the brahmands of ParBrahm and Brahm below by His acquirable attractive force.

Meaning: - Supreme God  Himself correctly tells the knowledge of the nature created by Him, and the knowledge of the origin of all the souls to His personal servant (disciple) that, the Supreme God gave rise to Brahm (Kshar Purush / Kaal) from within Him i.e. from His body by His word power and has secured all the brahmands, the Satlok, Alakh lok, Agam lok, and Anami lok above and the ParBrahm's seven sankh brahmands and Brahm's 21 brahmands below with His acquirable attractive force.

Like, Supreme God Kabir (KavirDev) Himself told the knowledge of the nature created by Him to His personal servants/ disciples i.e. friends, Shri Dharam Das ji, Respected Garib Das ji etc. The above-mentioned Ved Mantra is also supporting this.

Translation: (YaH) who (atharvaanm′) unchanging i.e. eternal (Pitram′) Father of the Universe (Dev bandhum′) the real companion of the devotees i.e. the basis of the soul (brahspatim′) Guru of the universe (ch) and (namsa) polite worshipper i.e. a methodical worshipper (av) with safety (gachchhaat′) who takes those who have gone to Satlok, to Satlok (vishweshaam′) of all the brahmands (janita) Creator, Jagdamba i.e. who is also endowed with the qualities of a mother (na dabhaayat′) who does not betray like Kaal (swadhaavaan ) who has the nature i.e. qualities of (yatha) as it is (saH) He (tvam′) Himself (KavirDevH / Kavir′ - DevH) is KavirDev i.e. in different language is also called Supreme God Kabir.

Translation: He, who is unchanging i.e. eternal, Father of the universe, the real companion of the devotees i.e. the basis of the soul, Guru of the universe, and who takes a polite worshipper, i.e. a methodical worshipper, who has gone to Satlok, to Satlok with safety; the Creator of all the brahmands - Jagdamba i.e. who is also endowed with the qualities of a mother, who has the nature i.e. qualities of not betraying like Kaal, He is, as it is, Himself KavirDev i.e. in different language He is also called Supreme God Kabir.

Meaning: - In this Mantra, it has also been made clear that the name of that Supreme God, who has done all the Creation, is KavirDev (Supreme God Kabir).

God who is unchanging i.e. is 'eternal' in reality (It is also evident in Gita Adhyay 15 Shlok 16 -17), the Guru of the universe (Jagat Guru), the basis of the soul, who takes those, who have gone to Satlok after becoming completely liberated, to Satlok, the Creator of all the brahmands, who does not betray like Kaal (Brahm), He is as it is Himself KavirDev i.e. God Kabir.

This God only, because of creating all the brahmands and living beings by His word power, is also called (Janita) Mother and (Pitram) Father and in reality, is (Bandhu) Brother also and He only (Dev) is the Supreme God. Therefore, only this Kavir Dev (Supreme God Kabir) has to be worshipped. "Tvamev Maata ch Pita Tvamev, Tvamev Bandhu ch Sakha Tvamev, Tvamev vidhya ch dravinm
Tvamev, Tvamev sarvM mm Dev Dev" You only are my Mother and Father, you only are my Brother and Friend, You are my knowledge and wealth, You are my God of all gods.

The magnificence of this very God has been described in detail in Holy Rigved Mandal no. 1, Sukta no. 24.

← Is Brahm (Speaker of Gita) Free from Birth & Death?       Worship of Brahma, Vishnu & Shiv has been said to be Futile in Bhagavad Gita →