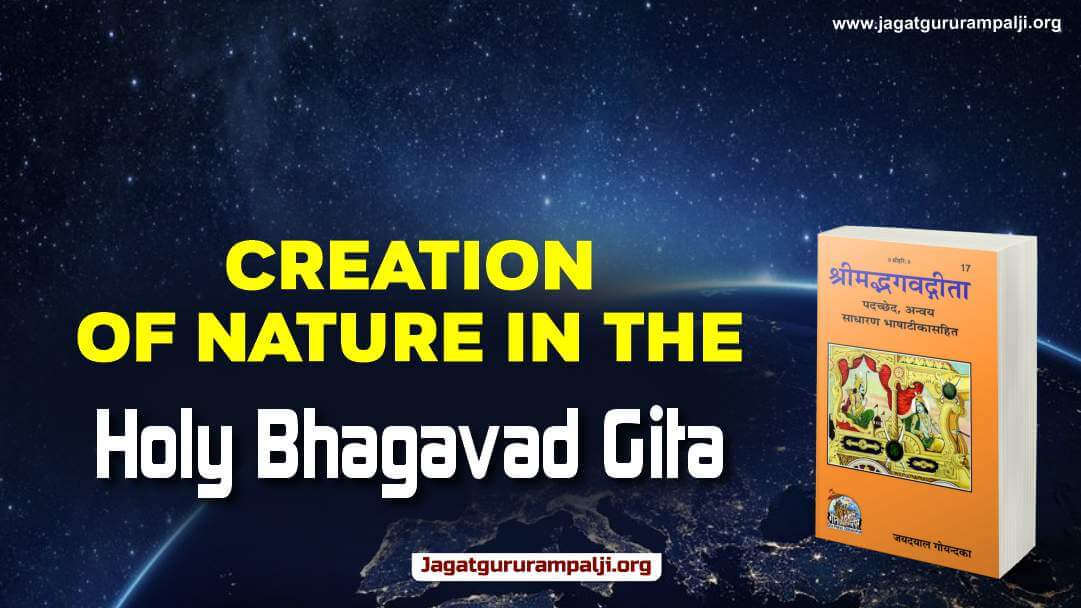 Kaal (Brahm) has given information about Creation of Nature in Holy Bhagavad Gita, Adhyay 14 Shlok 3 to 5.

Brahm (Kaal) is saying that Prakriti (Durga) is my wife and I, Brahm (Kaal), am her husband. The three gunas (qualities) [Rajgun-Brahma, Satgun-Vishnu, and Tamgun-Shiv] along with all the living beings have originated from the union of us two. I (Brahm) am the father of all the living beings and Prakriti (Durga) is their mother. I place the seed in her womb from which all beings are produced. The three gunas (Rajgun Brahma, Satgun Vishnu and Tamgun Shiv) originated from Prakriti bind the living being to a body based on its deeds.

Translation: (Kauntey) Oh Arjun! (sarvyonishu) in all the wombs (yaaH) whatever (moortayH) embodied beings (sambhavanti) are born (mahat) the Primeval Prakriti (taasaam) of all those (yoniH) is the mother who conceives them and (aham Brahm) I, Brahm-Kaal (beejprdH) the seed-giving (pita) am father.

Translation: Oh Arjun! Whatever embodied beings are born in all the wombs, the Primeval Prakriti is their mother who conceives them and I, Brahm-Kaal, am the seed-giving father.

Translation: (Oordhvmoolam ) with the roots above in the form of Purna Parmatma Aadi Purush Parmeshwar (adhHshaakham ) the branches below (avyyam ) eternal (ashvttham) is extensive tree, strong like a horse (yasya) whose (chhandaasi) smaller divisions, twigs (parnaani) are leaves (praahuH) are said to be (tam ) that tree of world (yaH) who (ved) knows along with all the parts (saH) he (vedvit ) is completely knowledgeable i.e. is Tatvdarshi.

Translation: With the roots above in the form of Purna Parmatma Aadi Purush Parmeshwar and the branches below, it is an eternal and extensive tree strong like a horse, whose smaller divisions are said to be twigs and leaves. One, who knows that tree of world along with all the parts, is completely knowledgeable i.e. is Tatvdarshi.

Translation: (Tasya) that tree's (adhH) below (ch) and (oordhvam) above (gunprvrddhaH) in the form of the three gunas, Brahma-Rajgun, Vishnu-Satgun, Shiv-Tamgun (prsrtaH) extended (vishayprvaalaH) defectslust, anger, attachment, greed, arrogance in the form of shoots (shaakhaH) branches - Brahm, Vishnu, Shiv (karmanubandheeni) of binding the soul to actions (moolani) are the root cause (ch) and (manushyaloke) in the world of men - i.e. Earth (adhH) below - in Hell, 84 lakh births, (oordhvam) above - in heaven etc (anusanttani) have been arranged.

Translation:That tree's three gunas (Brahma-Rajgun, Vishnu-Satgun and Shiv-Tamgun) -like defects (lust, anger, attachment, greed, arrogance) in the form of shoots and branches - Brahma, Vishnu and Shiv, extended below and above, are the root cause of binding the soul to actions64, and have been arranged in the world of men - i.e. Earth, below - in hell, 84 lakh births and above in heaven etc.

Translation: (Asya) this creation (na) neither (aadiH) beginning (ch) and (na) nor (antH) end (na) nor (tatha) such / as described above (roopam) form (uplabhyate) is perceived / found (ch) and (ih) here in this discussion i.e. in the knowledge of Gita being imparted by me, even I do not have full information (na) not (samprtishtha) because even I do not know the proper state of the creation of all the brahmands (enam) this (suvirudmoolam) having a properly stabilized state (ashvattham) the knowledge of the worldlike tree with a strong form (asangshastren) is equipped with complete knowledge (drden) by knowing through the Sukshm Ved i.e. Tatvgyan (chhitva) by slashing i.e. considering the bhakti of Niranjan to be short-lived, one should search beyond Brahma, Vishnu, Shiv, Brahm and ParBrahm, for Purna Brahm.

Translation :This Creation has neither a beginning nor an end and it is also not perceived like its real form. And here in this discussion i.e. in the knowledge of Gita being imparted by me, even I do not have full information because even I do not know about the proper state of the creation of all brahmands. By knowing i.e. slashing the knowledge of this world-like tree which has a properly stabilized state, and a strong form through the complete knowledge of firm Suksham Ved i.e. Tatvgyan which means by knowing that the bhakti of Niranjan is short-lived, one should search beyond Brahma, Vishnu, Shiv, Brahm and ParBrahm, for the Purna Brahm i.e. the Supreme God.

Translation: When one finds the Tatvdarshi saint (tatH) after that (tat) of that Supreme God (padam ) place i.e. Satlok (parimargitvyam) should properly search (yasmin ) in which/where (gataaH) having gone, devotees (bhooyaH) again (na, nivartanti) do not return to the world (ch) and (yatH) Parmatma - Param Akshar Brahm, from whom (puraani) ancient (prvrttiH) creation-nature (prsrta) has originated (tam) ignorant (Aadhyam ) Aadi Yam i.e. I, Kaal Niranjan (Purusham ) of Supreme God (ev) only (prpadhyate) I am in the refuge, and worship Him alone.

Translation: When one finds the Tatvdarshi saint, after that one should properly search for the place i.e. Satlok of that Supreme God. Having gone where, devotees do not return to the world, and the Supreme God/ Parmatma-Param Akshar Brahm, from whom the ancient creation-nature has originated, Ignorant Aadi Yam i.e. I, Kaal Niranjan also am in the refuge of that Supreme God only, and worship Him alone.

Translation: In this world, there are two types of Gods, Perishable and Imperishable. Likewise, in the loks of these two Gods, the bodies of all the living beings are said to be perishable and the soul, imperishable.

Translation: (UttamH) Supreme (PurushH) God (tu) however (anyaH) is someone else other than the two aforesaid Gods "Kshar Purush and Akshar Purush" (iti) in reality this (Parmatma) God (udahrtH) is called (yaH) who (loktryam ) into the three loks (aavishya) entering (bibharti) maintains / sustains everyone and (avyyaH) eternal (iishwarH) is God (Ishwar means greatest) among the gods i.e. is the Almighty God).

Translation:The Supreme God is, however, someone else other than the two aforesaid Gods "Kshar Purush and Akshar Purush". In reality, He is called God/Parmatma, who by entering into the three loks, nurtures and protects everyone, and is Eternal God (Ishwar means the greatest among the gods i.e. is the Almighty God).

Meaning: God, the giver of the knowledge of Gita, has only told this much that consider this world to be an upside-down tree. The root above (base) is Purna Parmatma. Know the branches etc. below as the other parts. A saint, who distinctly knows the description of every part of this world-like tree, is a Tatvdarshi Saint about whom there is a mention in Gita Adhyay 4 Shlok no. 34. In Gita Adhyay 15 Shlok 2, 3, only this much has been told that the three gunas are in the form of branches. Here in this discussion i.e. in Gita, I (the giver of the knowledge of Gita) cannot give you the full information because I do not have knowledge about the beginning and the end of the creation of this world. For that it is said in Gita Adhyay 4 Shlok no. 34 that, gain knowledge about that Purna Parmatma from a Tatvdarshi Saint. In this Gita Adhyay 15 Shlok 1, the identity of that Tatvdarshi Saint has been mentioned that he will give knowledge about every part of the world-like tree. Ask him only. In Gita Adhyay 15 Shlok 4, it is said that after finding that Tatvdarshi Saint, one should search for that Param Pad Parmeshwar (the Supreme God with Supreme State) i.e. one should do sadhna according to the directions of that Tatvdarshi Saint, by which one attains complete salvation (eternal salvation). It has been clarified in Gita Adhyay 15 Shlok 16, 17 that, there are three Gods; one is Kshar Purush (Brahm), second is Akshar Purush (ParBrahm), and third is Param Akshar Purush (Purna Brahm). Kshar Purush and Akshar Purush are actually not eternal/immortal. That Eternal/Immortal God is someone else other than these two. He only by entering into the three worlds/loks, sustains and nurtures everyone. It has been proved in the above-mentioned Shrimad bhagavad Gita Adhyay 15, Shlok 1 - 4 and 16, 17 that the root of this upsidedown worldly tree is Param Akshar Brahm i.e. Purna Brahm from whom the whole tree gets nourishment. The part of the tree seen just above the ground is called 'trunk' and consider this to be 'Akshar Brahm' i.e. ParBrahm. From that trunk, several bigger branches arise. Consider, one of the bigger branches to be Brahm i.e. Kshar Purush. And from that bigger branch, arise other three smaller branches; consider them to be Brahma, Vishnu and Shiv. Beyond the branches, are the leaves and consider them to be the living beings of this world.

In the aforementioned Gita Adhyay 15, Shlok 16 and 17, it is clear that Kshar Purush (Brahm) and Akshar Purush (ParBrahm) and the material bodies of all the living beings in their loks are perishable and their souls are imperishable; which means that the aforesaid Gods and the living beings under them are perishable. Even though, Akshar Purush (ParBrahm) has been called as imperishable, but, in reality, the Eternal God is someone else other than these two. He, on entering into the three worlds, nurtures and sustains everyone. In the above description, a distinct description of three Gods has been given.