Creation of the Universe (Nature) in Holy Atharva Veda 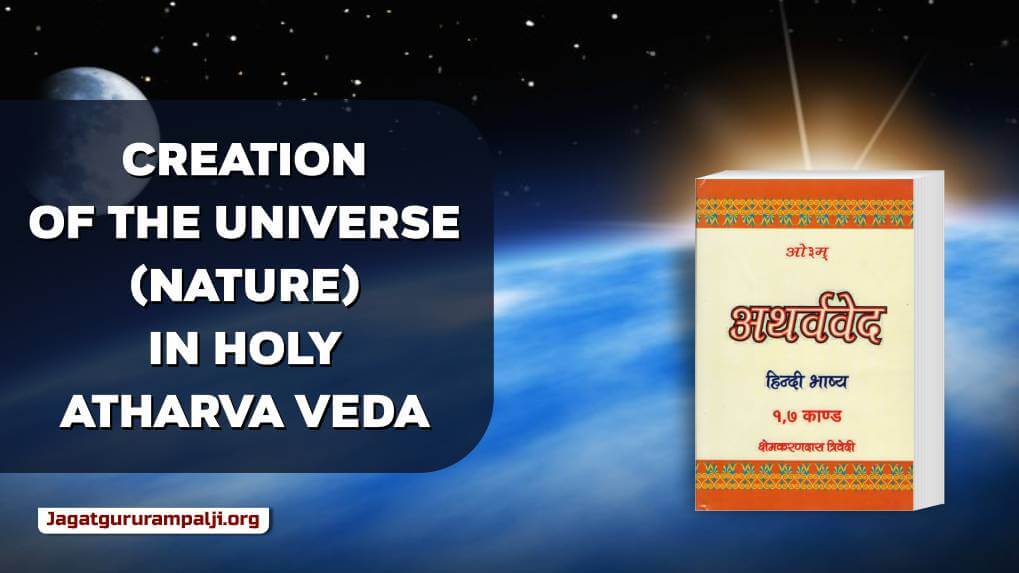 In this article we will find the answers to these critical questions:

What is Atharva Veda?

Before diving into the mysteries of the creation of the universe we must first know what is Atharva Veda? Vedas are the most ancient sacred texts of Hinduism. Among which RigVeda is the oldest Veda and Holy Atharva Veda is the youngest one. Atharvaveda contains about 730 hymns divided into about 20 books/Kands, also including the knowledge of the creation of nature & universes.

Who has written Atharvaveda?

Similarly, at the beginning of the Kalyuga, it was Maharishi Ved Vyas who has written Atharva Veda and the other three Vedas.

What does Atharva Veda say about the Creation of the Universe (Nature)?

How the universe was created according to Atharva Veda?

Translation:The Primordial i.e. Eternal God by appearing, that weaver on the summit secured Satlok etc self-illuminated and boundless loks i.e. the different loks with vast boundaries, by His own desire, wisdom and with great passion by weaving like a warp i.e. cloth. And that Supreme God only does all the creation. Therefore that same Original Master has created the original place Satyalok. Similar to this, He separately established the residing places, the somewhat permanent loks of Akshar Purush i.e. ParBrahm and the temporary loks etc of Kshar Purush.

Meaning: - In this Atharva Veda Mantra, Brahm (Kaal) is saying that the Eternal God Himself appeared at the summit and created the eternal/divine universes, like Satlok with great passion. He weaves, like a cloth, those self-illuminated and boundless universes and secured them in the upper part of His creation. And the same primordial God temporarily established in the lower part the seven shankh(700 quadrillions) universes of ParBrahm and twenty-one universes of Brahm (Kaal) and further creation in these multiverses is done by Him too.

Atharvaveda Kand no. 4 Anuvaak no.1 Mantra no. 4

Meaning: The Almighty God created the upper eternal universe/loks like Satlok, Alakh lok, Agam lok and Anami lok. These divine realms are created from light with the element of sky i.e. Sound. Similarly, He created all the lower/temporary universes of Brahm and ParBrahm with the element of Earth and established smaller regions and residential places in every universe.

Who is the Creator of the Universe (Nature) according to Atharva Veda?

These Mantras tell us that the eternal God who is the creator of the universe according to the Atharva Veda is Kabir Sahib(Kavir Dev). Similarly, Holy RigVeda too tells us that Kabir Sahib is the creator.

Atharvaveda Kand no. 4 Anuvaak no.1 Mantra no. 7

Translation: (YaH) who (atharvanm') eternal (Pitram') Father of the Universe (Dev bandhum') the real companion i.e. the basis of the soul (brahspatim') Universal Guru (ch) and (namsa) polite worshipper who worships according to the scriptures (av) with safety (gachchhaat') who takes them to Satlok (vishwesham') of all the universes (janita) Creator, Jagdamba i.e. He has all the qualities of mother (na dabhaayat') does not betray like Kaal (swadhavan') who has the nature (yatha) as it is (saH) He (tvam') Himself (KavirDevH / Kavir'DevH) is KavirDev i.e. Supreme God Kabir is the creator of all the universes and souls.

Meaning: - The God who is ‘eternal’ and ‘immortal’ in reality (It’s also evident in Gita 15:16-17). He is the Guru and father of the universe (Jagat guru), the basis of the soul; who takes the devotees, who have become completely liberated by worshipping Him, to Satlok. The creator of all the universes, who does not betray like Kaal (Brahm) is KavirDev i.e. Supreme God Kabir.

This God because of creating all the universes and living beings with the power of His word is also called (Janita) Mother, and he is our real father and brother too and He only (Dev) is the Supreme God. This is the meaning of this Atharva Veda Mantra.

Atharvaveda Kand no. 4 Anuvaak no.1 Mantra no. 3

Translation: (Pr) first of all (devanam') of the gods and the universes(jagye) the knowledge of the origin (vidwanasya) of a curious bhakt (yaH) who (bandhuH) the real companion, to His personal servant (janima) whatever has been created by Him (vivakti) Himself tells correctly in detail that (BrahmnH) supreme God (madhyat') from within Him i.e. by the word power (brahmH) Brahm(Kaal) (ujjbhaar) gave rise to i.e created (vishwa) the whole world i.e. all the divine realms/loks (uchchaeH) above Satlok etc (nichaeH) below all the universes of ParBrahm and Brahm (swadha) by His acquirable (abhiH) attractive force (pr tasthau) properly established both of them.

Meaning: - Supreme God Himself correctly tells the knowledge of nature created by Him, and the knowledge of the origin of the universe and souls to His personal disciple – that He, Himself, gave rise to Brahm/Kaal from within His body with His word power, and has secured all the universes, the divine realms above and the temporary universes of Brahm/Kaal and Parbrahm below with the attractive force he created.

Similarly, God Kabir (KavirDev) Himself told the knowledge of nature created by Him to His disciples i.e. friends like Shri Dharam Das Ji, Respected Garib Das Ji, and many others. This Atharva Veda Mantra also supports this.

After Giving the Knowledge of Creation of Nature, God Takes His Devotees Back to the Satlok - Holy Atharva Veda

Atharvaveda Kand no. 4 Anuvaak no.1 Mantra no.6

Meaning: - That same Supreme God after giving them the knowledge of the creation of nature takes His devotees, who worship Him as per His ordinance, back to the same eternal place (Satlok) from where we had come from after separating from God. After attaining that prime God, whom we long for, the devotee soul feels ecstatic and with immense happiness prays to Him - that Oh God, we who were lost for infinite births have found our home with your grace.

Similar to this Atharva Veda Mantra, its evidence is also present in Holy RigVeda (10:90:16)

In the same way, Supreme God KavirDev (God Kabir) Himself, gave the knowledge of the origin of the universe to Sant Gareebdas ji and took him to Satlok.

Meaning: The true Guru (Supreme God Kabir) took me to Satlok – which is the most beautiful and blissful place.

Who is the Main God in Atharvaveda – that created all the Universes and Gods?

While Vedas mention many demigods, the most important question is – who is the main God in Vedadeda?  As evident from the aforementioned mantras 1 and 7 –God Kabir Sahib / Kavir Dev is the Main(Supreme) God in Atharvaveda.  He gave rise to Adi Parashakti to hold the universe together and He only is the creator of the Goddess Durga/Ashtangi. The creator of Brahm/Kaal and ParBrahm is also Kabir Sahib (RigVeda 10.90.5).

Atharvaveda Kand no. 4 Anuvaak no.1 Mantra no. 2

Translation: (Iyam') this same (pitrya) Universal Father God (etu) this (agre) supreme (prathmaay) the First Maya (rashtri) Rajeshwari Shakti i.e. Adi Parashakti, whose quality is known as the attractive force (janushe) by giving rise to (bhuvneshthaH) established the universes (tasma) that same God (surucham') with great passion, by His own wish (etam') this (prathmaay) by the Shakti of first origin(Adi Parashakti) (hvarmhyam') stopping the separation of each other (shrinantu) God ordered the gravitational force to prevail forever. With that never-ending (dharmm') character (dhaasyave) maintaining, secured the universes by weaving like cloth.

Meaning: This Universal Father God then gave rise to this first Maya Rajeshwari Shakti i.e. Adi Parashakti, which is the attractive force. Supreme God ordered this first originated Shakti i.e. Adi Parashakti, to hold all the universes together with its gravitational force. Thus he created and established all the aforesaid universes which are holding each other with this never-ending force of attraction.

Atharvaveda Kand no. 4 Anuvaak no.1 Mantra no. 5

Translation: (SaH) the same (budhanyaat') from the Original Master (abhi-agram') on the very first place (Aashtr) Ashtangi/Maya/Durga i.e. Prakriti Devi (janusheH) originated; because Satlok is the original place, the place of origin of the lower universes of ParBrahm and Brahm; known as the Third Abode (tasya) master of this Durga is also this (samraat) King of the kings (brhaspatiH) the Greatest Lord and Jagatguru (devta) is Supreme God (yat') from whom (ahH) everyone got separated (ath) after this (jyotishH) from Jyoti Niranjan/Kaal (shukram') semen (janisht) from the womb of Durga (vipraH) devout souls (vi) separately (dhyumantH) in the mortal world and Heaven, by the order of Jyoti Niranjan, Durga said, (vasantu) live, i.e. they started living.

Meaning: - The Supreme God gave rise to Ashtra i.e. Ashtangi (Durga/Prakriti Devi) in Satlok, which is the fourth divine realm and the place of origin of the lower universes. Supreme God only is the King of kings, Guru of the Universe and the Satpurush from whom every-body (Brahm/Kaal, Devi Durga and all the souls) got separated.

After that, all the living beings, having born from Jyoti Niranjan’s (Kaal’s) seed (semen) through Durga’s (Aashtra) womb, started living in Heaven and Earth. Thus the creation of the universes was completed by Supreme God Kabir Sahib.

Conclusion: Holy Atharvaveda gave us very important information related to the creation of nature / universe which is as follows.

Still, there is so much information that the Holy Vedas can not provide. As evident from the aforesaid mantra 3 – God Kabir Sahib Himself gives the complete information of the creation of nature which he gave in the Holy Kabir Sagar which is now revealed by Saint Rampal Ji Maharaj.