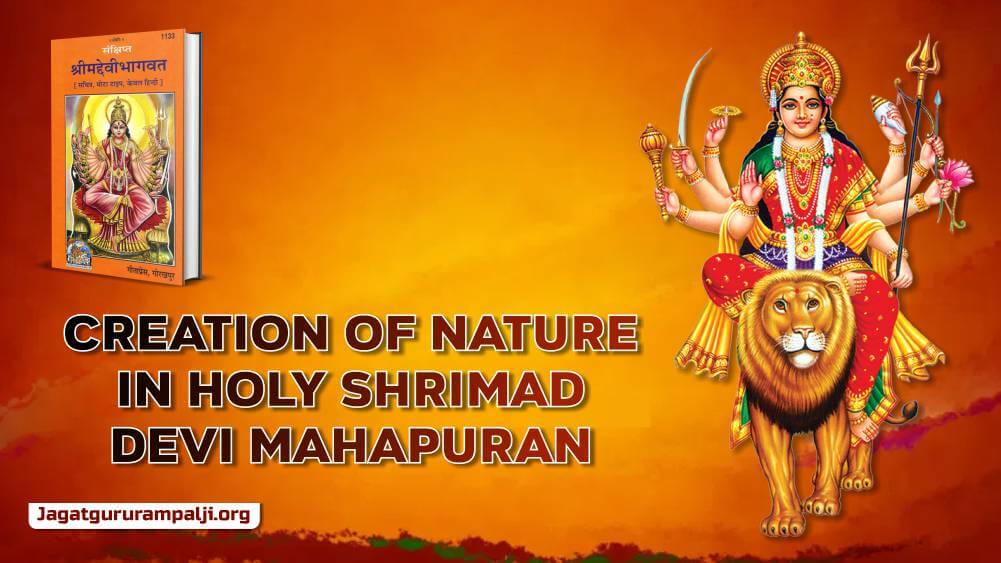 Mother-Father of Brahma, Vishnu and Shiv

(Birth of Brahma, Vishnu and Shiv from the union of Durga and Brahm)

Holy Shrimad Devi Mahapuran, Third Skand Adhyay 1 to 3 (published from Gitapress Gorakhpur, translator: Shri Hanuman Prasad Poddar and Chiman Lal Goswami Ji, from Page no. 114 onwards) From Page no 114 to 118, it is mentioned, "Many consider the Acharya Bhavani (Durga) to be the fulfiller of all wishes. She is known as Prakriti and has inseparable relationship with Brahm. Like, a wife is also known as 'the other half', which means that Durga is Brahm's (Kaal's) wife. On being asked about the subject of the creation of nature in one brahmand by king Parikshit, Shri Vyas Ji said that I had asked Shri Narad Ji that Oh, Devrishi (godly sage)! How was this brahmand created? In answer to this question of mine, Shri Narad Ji said that I had asked my father, Shri Brahma Ji that Oh, father! Have you created this brahmand or Shri Vishnu Ji is the creator or Shiv Ji has created it? Please tell me the truth. Then my
revered father told me that Son Narad, I found myself sitting on a lotus flower. I did not know from where I appeared on that vast area of water? I explored the earth for one thousand years but did not find any end of that water. Then an ethervoice said, "Do meditation". I meditated for one thousand years. Then an ethervoice ordered to do creation. Just then, two demons, named Madhu and Kaitabh, came there. In fear of them, I got down holding the stalk of the lotus flower. There, god Vishnu Ji was lying unconscious on a snake bed (shesh shaiya). A woman came out of his body (Durga who had entered into his body like a ghost). She became visible in the sky adorned with jewellery. Then god Vishnu became conscious. Now, there were two of us, Vishnu ji and I. Just then, god Shankar also came there. Goddess made us sit in an aircraft and took us to brahmlok. There we saw another Brahma, Vishnu and Shiv. Then we saw a goddess. On seeing her, Vishnu Ji discerningly gave the following description: (Brahm Kaal provided insight to god Vishnu; he recalled the memories of his childhood, and then told the story of his childhood).

On page no. 119-120 of Devi MahaPuran in Third Skand, Adhyay 1-3 god Vishnu Ji said to Shri Brahma Ji and Shri Shiv Ji that she is the mother of us, three. She only is the Universal mother/ Jagat Janni, goddess Prakriti. I had seen this goddess, when I was a small child and she was rocking my cradle.

In the Third Skand, Adhyay 5 on page no. 123; Vishnu praising Durga said - you are a pure figure. This whole world is arising from you only. I (Vishnu), Brahma and Shankar, we all exist by your grace. We take birth (aavirbhaav) and die (tirobhaav); which means, we three gods are mortal. Only you are eternal. You are the universal mother/Jagat Janni / goddess Prakriti.

God Shankar said - Goddess, if the greatly fortunate Vishnu has taken birth from you, then Brahma who was born after him, must also be your son only, and then am I, Shankar, who does Tamoguni leela, not your child i.e. you only are my mother too.

Please think: - It is clear from the above-mentioned description that Shri Brahma Ji, Shri Vishnu Ji and Shri Shiv Ji are mortal . They are not Mrityunjai (changeless-eternal) or the greatest gods. They are Durga's (Prakriti) sons and Brahm (Kaal- SadaShiv) is their father.

In Third Skand, Adhyay 4 to 5 on page no. 125; on being asked by Brahma Ji that Oh mother! Are you the Brahm who has been mentioned in Vedas or is it someone else?" Here, in its answer Durga is saying that I and Brahm are one only. Then in this very Skand, Adhyay 6 on page no. 129, she is saying that now to accomplish my task, you all sit in the aircraft and go quickly. When in presence of any difficult situation you will remember me, then I will appear before you. gods! You must always keep remembering Brahm and me (Durga). If you will keep remembering us both, then there is no doubt why your tasks should not be accomplished.

It is self-evident from the aforesaid description that Durga (Prakriti) and Brahm (Kaal) only are the mother and father of the three gods. And Brahma, Vishnu and Shiv are mortal and are not all-powerful.

Translation: (Ch) and (ev) also (ye) that (satvikaH) preservation from Satvgun Vishnu Ji (bhavaH) characteristic and (ye) that (rajsaH) creation from Rajogun Brahma Ji (ch) and (tamsaH) destruction from Tamogun Shiv Ji (taan ) all those, you (matH, ev) happening from me alone in a well-planned manner and according to the rules (iti) thus (viddhi) consider (tu) but, in reality (teshu) in them (aham ) I and (te) they (myi) in me (na) are not.

Translation: And also the characteristics, of preservation from Satvgun Vishnu Ji and that of creation from Rajogun Brahma Ji and destruction from Tamogun Shiv Ji, consider all of them to be happening from me alone in a well-planned manner and according to the rules; but, in reality, neither am I in them, nor are they in me.