Lord Brahma's Endeavour to Search for His Father Brahm (Kaal) 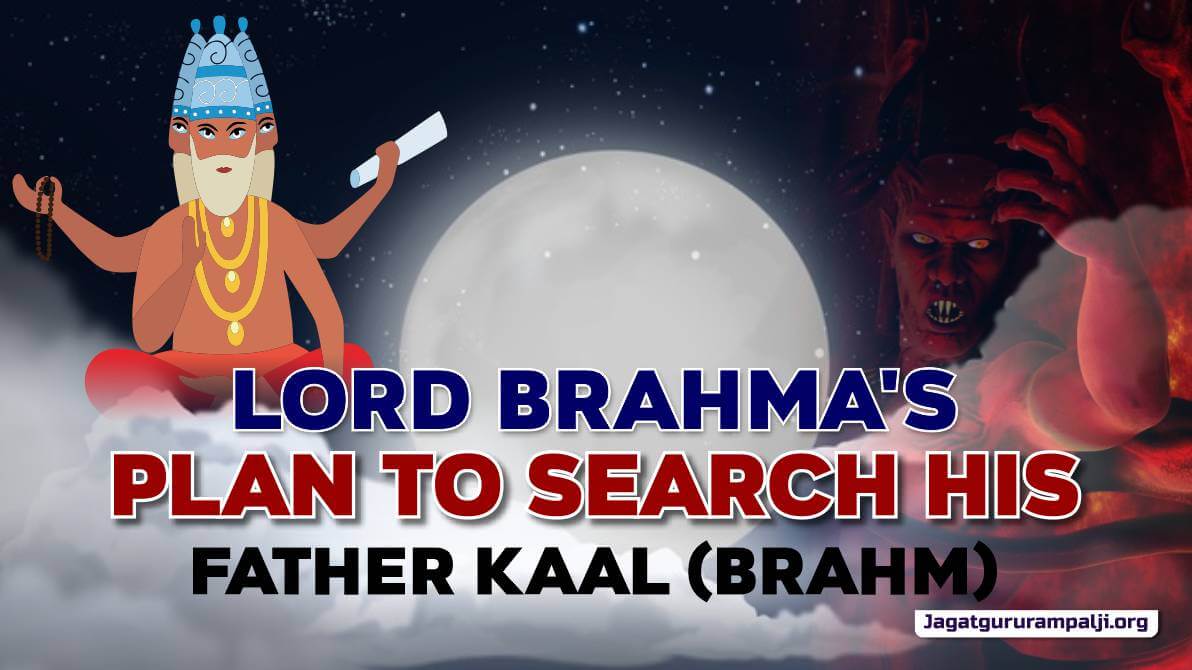 This article will throw light on facts that have never been revealed to the devotees regarding Lord Brahma. To the surprise of readers, this becomes imperative to understand why and where was Lord Brahma’s father hidden that he had to endeavour to search him?

Since Lord Brahma’s father Jyoti Niranjan (Kaal / Shaitan) had taken an oath to remain unmanifested / invisible (Gita Adhyay 7, Shlok 24 & 25) due to the misconduct he did in the pious eternal world ‘Satlok’, Lord Brahma does not know who is his father? As mentioned in holy scriptures, when the ocean was churned and Vedas came out they were given to Lord Brahma. After reading Vedas Lord Brahma found that the creator of the universe is someone else who is the Purush ie. God of the lineage. He is the Supreme God. He tried to get the answer from his mother Goddess Durga who had told him that she is the Supreme. Upon insisting that Vedas are the word of God and cannot be untrue, Maya / Ashtangi / Durga disclosed the truth to Brahma that he has a father who never appears in real form to anyone. He remains hidden with his ‘Yogmaya’

Brahm-Kaal resides in the 21st Mahabrahamand called ‘Brahamlok’. He has created this secret place for himself. He remains hidden with his wife Goddess Durga in the form of MahaBrahma, Mahavishnu, and MahaShiva and keeps his wife in the form of MahaSaraswati, Mahalaxmi, and MahaParvati respectively. This region is unattainable by any worship.

Lord Brahma’s Endeavour to Search for his Father ​Brahm

Excerpts from Sacchidanandghan speech ie. Sukshamveda provides evidence of why Lord Brahma Endeavoured to search for his father Brahm.

Let us review the facts.

Then Goddess Durga said to Brahma that Alakh Niranjan (Kshar Purush) is your father but he will not appear before you. Lord Brahma Endeavor to search his father Brahm saying, "I will return only after seeing him." Mother asked, "What will you do if you don't get to see him?" Brahma said, "I pledge that if I do not see father, then I will not come in front of you." On saying this, Brahma anxiously left towards North where there is darkness everywhere. There, Brahma meditated for four yugas (ages) but did not achieve anything.

Through an either voice, Kaal said, "Durga, why has the creation not been done?" Bhavani said that your eldest son, Brahma has adamantly gone in search of you. Brahm (Kaal) said, "Call him back". I will not appear before him. The entire task of creation of living beings is impossible without Brahma." Then Durga (Prakriti), with her word power, created a girl called 'Gayatri' and ordered her to bring Brahma back. Gayatri went to Brahma but he was meditating and did not feel her presence. Then Prakriti, by telepathy, told Gayatri to touch Brahma's feet and Gayatri did the same. Brahma's meditation got disturbed and he furiously said, "Who is this sinner who has interrupted my meditation, I will curse you." Gayatri said, "It is not my fault.

First, listen to me and then you may curse me. Mother has sent me to bring you back because living beings cannot be created without you." Lord Brahma said, "How can I return? I have not seen the father and will be ridiculed if I return like this. If you say in front of the mother that Brahma has seen father (Jyoti Niranjan) and be my eyewitness then I will return with you." Gayatri said that if you will have sex with me, then I will be your false witness. Brahma thought that I could not see father and will feel ashamed in front of the mother if I return like this. Seeing no other way out, he did sex with Gayatri.

Then Gayatri said, "Let us prepare one more witness." Brahma said, "That would be good." Gayatri created another girl named 'Puhapvati' by her word power. Both told her to testify that Brahma saw his father. Puhapvati said, "Why should I give a false statement? Yes, if Brahma does intercourse with me, then I can be his false witness." Gayatri persuaded Brahma that there was no other way out. Brahma did sex with Puhapvati, and then the three came to Durga (Aadi Maya / Prakriti).

While all three returned Mother Durga asked if Lord Brahma had a vision of his father, to which he lies that he saw his father. Annoyed with the lie mother Durga cursed Lord Brahma that “You will not be worshipped in the world”. Lord Brahma after this shameful act remains non-worshippable.