Universe Information: What is Universe? (Creation of Nature)

When God loving souls will read the following ‘Creation of Universe (Nature)’ for the first time, they will feel that this is a baseless story. But on reading the evidence from all the holy true scriptures they will bite their fingers between their teeth that where was this authentic nectar-like knowledge hidden uptil now? Please keep reading with patience and keep this sacred knowledge safe. It will be useful for your next hundred and one generations.

Holy souls! kindly first understand the position of everyone and then read the original knowledge of the creation of nature (Universe) by the immortal & Almighty God.

1. Purna Brahm: - Purna Brahm or 'Supreme God' is the controller of infinite brahmands (Universe). In this Nature's Creation (Universe), This same Purna Brahm is also addressed as

All the above 4 are designations of the same Supreme God according to the 'lok' He is present in. Supreme God by acquiring different-different forms lives in all of His four loks, and is the controller of infinite brahmands.

2. Par Brahm(Owner of the Seven Brahamands): - He is the Master (Lord) of only seven sankh brahmands. He is also known as Akshar Purush. But in reality he, as well as his brahmands are not eternal.

3. Brahm Father of Hindu Trinity: - He is the Master (Lord) of only twenty-one brahmands. He is known as Kshar Purush, Jyoti Niranjan, or Kaal. He and all of his brahmands are perishable. (The evidence of the above-mentioned three Purushs (gods) is also in Shrimad Bhagavad Gita Adhyay 15 Shlok 16-17.)

4. Lord Brahma: - He is the eldest son of Brahm. Lord Vishnu is the middle son and Lord Shiv is the last, the third son of Brahm. These three sons of Brahm are the masters (Lord) of only one department (guna) each in one brahmand and are perishable. For vivid description, please read the 'Creation of Nature (Universe)' mentioned below.

Creation of Nature (What Is Universe?)

Supreme God Kabir has Himself given the knowledge of the nature created by Him in Sukshm Ved i.e. Kabir Vaani (Kabir Speech) which is as follows-

In the beginning, there was only one place called ‘Anami (Anamay) Lok’ (place is addressed as 'Lok' in Hindi), which is also known as Akah Lok. The Supreme God used to live alone in the Anami lok. The real name of that God is Kavir Dev i.e. God Kabir. All the souls were contained in the body of that Supreme God Kabir. 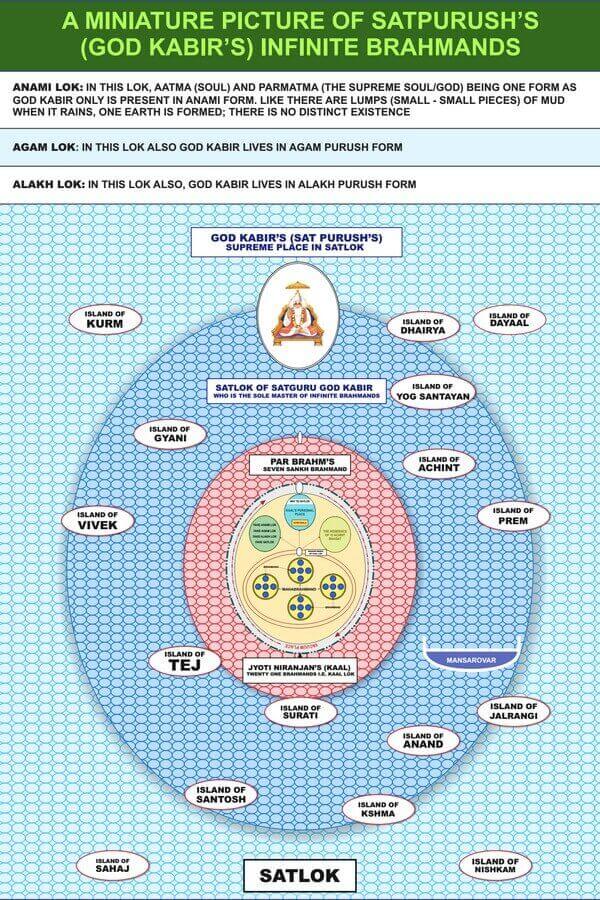 This Kavir Dev’s designated name in Anami Lok is Anami Purush (‘Purush’ means God. God has created man in His own image/form. That is why a man is also known as ‘Purush’ in Hindi / Sanskrit.) The brightness of one hair follicle of Anami Purush is more than the combined light of One Hundred Quadrillion (in Indian numeral system, 1 sankh = 100 quadrillion) suns (Sun is a very bright star in our solar system and is being used as a benchmark for lumination for sake of comparison).

Important: - to understand the concept further it is imperative to cite this example. For instance, the name of a country's Prime Minister is different, and the title of his post is 'Prime Minister'. Many times, the Prime Minister also keeps many departments with him like home ministry or the defense ministry. Then whichever department's documents he signs, at that time he writes the same post. For example, if he signs the documents of Home Ministry, then he writes himself as the Home Minister. In that case the power of the signature of the same person is less compared to the Prime Minister but in reality it is the same person. Likewise, there is difference in the brightness of God Kabir (Kavir Dev) in different loks and He has different designation.

This Almighty God Kabir only then appeared in Agam Lok and is also the Master of Agam lok and there His title is Agam Purush. This 'Agam' God's human-like visible body is very bright. The light of whose one hair follicle is more than the combined light of One Hundred Billion (1 kharab = 100 Billion) suns.

Almighty God Kabir then appeared in Alakh Lok and He Himself is also the Master of Alakh Lok, and over there His title is 'Alakh Purush'. This God's human-like visible body is very effulgent, is self-illuminated. The light of his one hair follicle is more than the light of One Billion (1 arab = 1 Billion) suns.

This very Supreme God then appeared in Satlok and He is also the Master of Satlok. Therefore, His title in Satlok is Sat Purush (the Immortal / Eternal God). This Sat Purush is also known by many other names such as Akaal murti,Shabd Swaroopi Ram, Purna Brahm, Param Akshar Brahm etc. This Sat Purush Kavir Dev's (God Kabir's) human-like visible body is very bright whose one hair follicle's brightness is more than the combined light of crore (10 million) suns and moons. 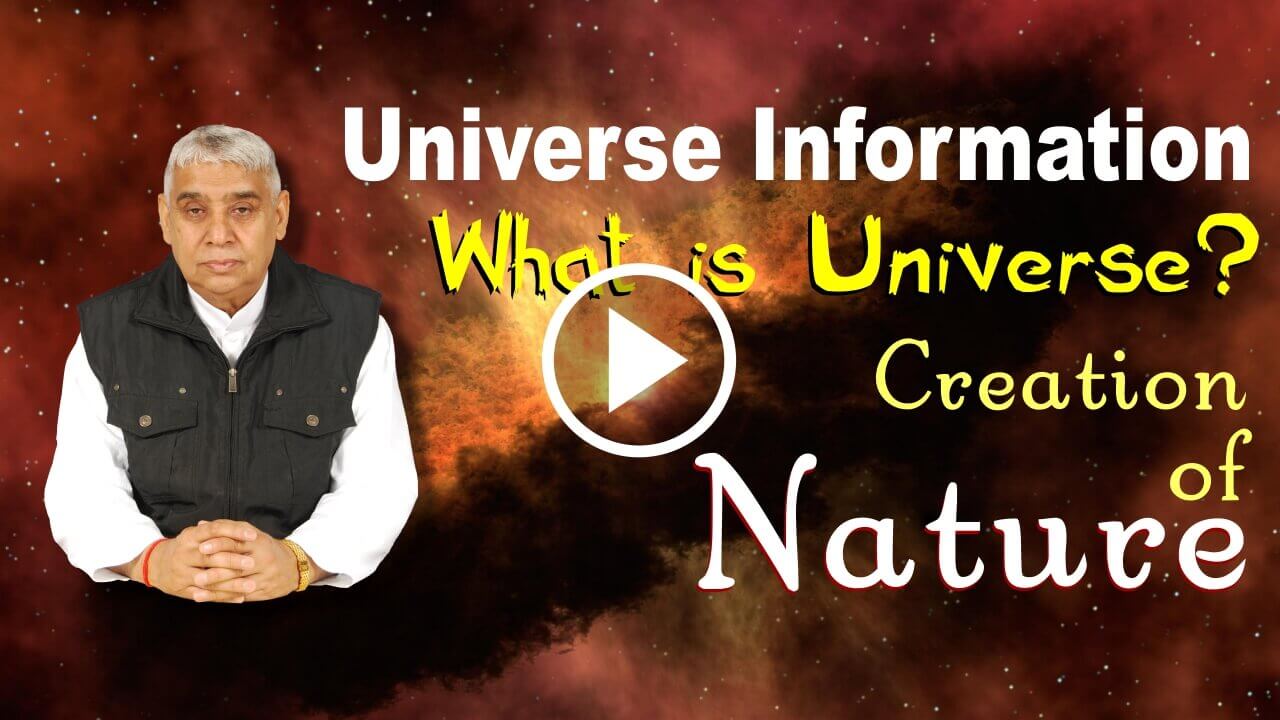 This God Kabir, after appearing in Sat Purush form in Satlok did other creation in Satlok.

Sat Purush Kavir Dev entrusted the rest of Satlok’s creation work to His son, Achint, and gave him the power to do it. Achint created Akshar Purush (Par Brahm) with the power of word and asked him for help. Akshar Purush went to Mansarover to take bath, started enjoying there and fell asleep. He did not come out for a very long time. Then Achint requested God Kabir to help wake up Akshar Purush. On Achint’s request, to wake Akshar Purush from sleep, God Kabir took some nectar from that Mansarover and made an egg out of it. He inserted a soul into it and put that egg in the ‘nectar’ water of Mansarover. The thunder of the egg disturbed Akshar Purush’s sleep. He looked at the egg in anger and the egg broke into two halves. From it, came out Jyoti Niranjan (Kshar Purush) who later came to be known as ‘Kaal’. Actually, his name is ‘Kael’. Then, SatPurush Kavir Dev ordered (through an ethervoice) both of them to reside in Achint’s island. After getting the permission, both Akshar Purush and Kshar Purush (Kael) started living in Achint’s island. (All this was done to show the children their foolishness, so that they do not crave for power because nothing can be achieved without the Almighty).

Then the Supreme God Kavir Dev Himself did all the creation. With His word power, He created a Rajeshwari (Rashtri) Shakti (power) and with which He established all the brahmands. This is also known as Parashakti Paranandni. He then produced all the souls in human form like Himself, from within Him, by the power of His word.

He created the body of every soul similar to Himself and its brightness equivalent to that of sixteen suns and in human like form. But God’s body’s one hair follicle has the brightness more than that of crore suns (in Satlok).

Previous << The Truth of Universe’s Creation According to All Religions   ||    How were the Souls Caught in Kaal's (Brahm, Satan, Shaitan, Devil) Trap? >> Next