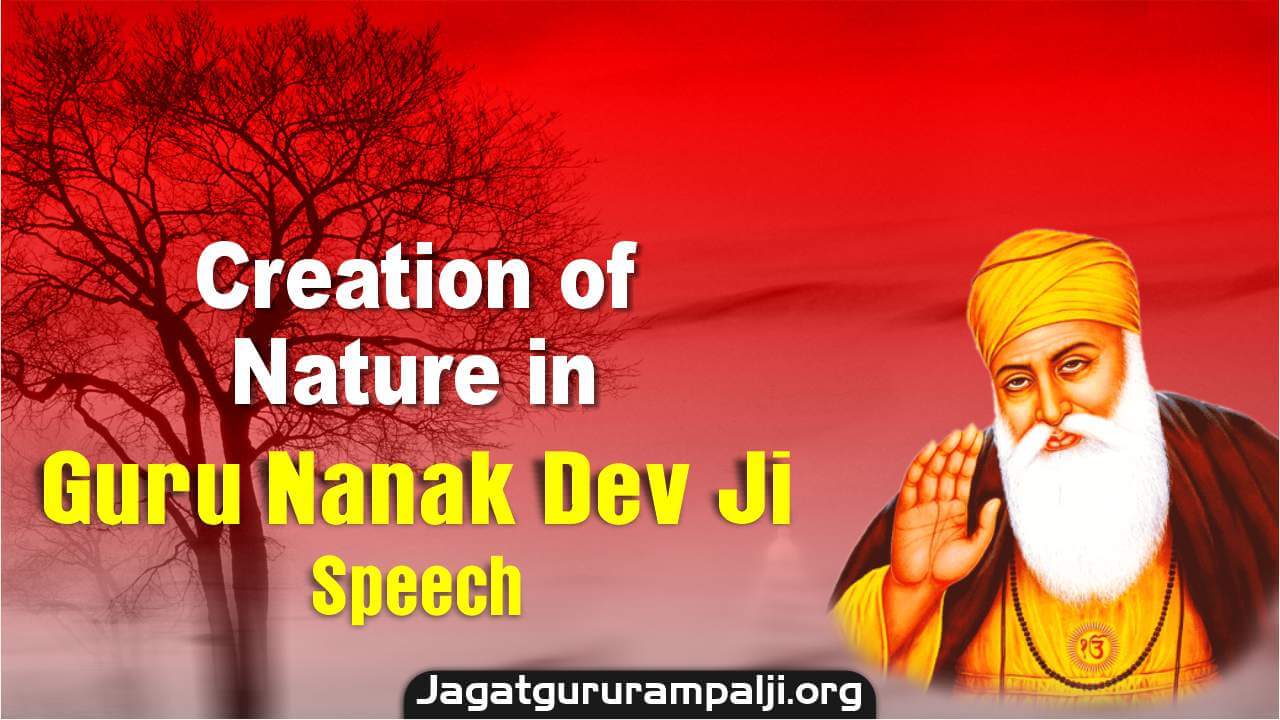 The meaning of the aforesaid speech is that the true God (SatPurush) has Himself created the entire nature with His own hands. He Himself created the egg, broke it, and then Jyoti Niranjan came out of it. That same Supreme God created the five elements, earth, sky, air, water etc. for all the living beings to reside in. He Himself is the witness of the nature created by Him. Nobody else can give the correct information. Then after Niranjan, who came out of the broken egg, the three, Shri Brahma Ji, Shri Vishnu Ji and Shri Shiv Ji, were born. Then, other gods and goddesses and infinite living beings were born. Later, six Shastra (scriptures) and 18 Purans were formed, based on the life histories of other gods and experiences of other rishis (sages). Shri Guru Nanak Dev Ji is saying that Kaal does not eat that living being who solely worships the Supreme God by His true naam (Satyanaam) and (pranvati) abides by the rules directed by the Guruji.

The essence of the aforesaid sacred speech is that the Saint, who will narrate the whole story of nature's creation and will tell who came out of the two-halved egg and created the Brahm lok in the vacuum space i.e. gave rise to Brahma, Vishnu and Shiv in a secret place, and who is that God who made Brahm (Kaal) narrate the four Vedas (Holy Rigved, Yajurved, Samved and Atharvaved) and that the Supreme God makes every living being say whatever He wishes, if you find a saint who fully tells about all this knowledge, then go to him. He who clears up all your doubts, only he is a Complete Saint i.e. is Tatvdarshi.

In the aforesaid sacred speech, Shri Nanak Ji is saying that Brahma Ji was born from Omkaar i.e. Jyoti Niranjan (Kaal). After wandering for many yugas, Omkaar (Brahm) produced Vedas, which were obtained by Brahma Ji. Only 'Om ' mantra is the actual mantra for the devotion of the three loks. One is salvaged by doing jaap of this 'Om ' shabd after taking updesh from a Complete Saint i.e. by acquiring a Guru.

Important: Shri Nanak Ji has given secretive description of the three mantras (Om + Tat + Sat ) in several places. Only a Complete Saint (Tatvdarshi) can understand this and the method of the jaap of the three mantras is explained only to the Updeshi (follower, disciple). (Page no. 1038)

The meaning of the aforesaid sacred speech is that the Saguru who imparts the real knowledge is unique. He only chants Naam mantra and does not teach any other forced meditation. Even if you want wealth, position, wisdom or the power of bhakti, then also, only a Complete Saint can fully provide the knowledge of the path of true bhakti. Such a Complete Saint is found with great fortune. Only that Complete Saint will tell that God has already created our real home (Satlok) in the Sunn (vacuum place) above. In that place, a sound of the real Saarnaam is going on. One can achieve that blissful state, which means, can reside in that real happiness-giving place by the Saarshabd of the Eternal God, and not by other naams and incomplete gurus.

The essence of the above-mentioned sacred speech is that Shri Nanak Sahib Ji is saying, "Oh, Bharthari Yogi Ji, your sadhna is upto god Shiv, and because of that you have acquired a place in Shiv nagri (city). The 'Singi' shabd etc which is going on in your body is of these lotuses' only, and is being audible in the body from every god's lok like in a television.

I (Nanak Ji) focus with undivided mind only on one God PaarBrahm i.e. the Supreme God, who is beyond everyone, and is someone else.

I do not show off externally (like, smearing ash on the whole body, holding a wand in hand). I consider all the living beings to be children of one Supreme God (SatPurush). Everyone is functional by His power only. My mudra (revenue) is to chant true Naam after acquiring it from a Complete Guru, and my baana (attire) is forgiveness. I am a worshipper of the Supreme God and the path of Bhakti of Complete Satguru is different from yours."

The meaning of the above-mentioned sacred speech is that Shri Nanak Ji is saying that those who forgetting the real naam of Supreme God, are doing jaap of naams of the other gods in misapprehension, they, as if, instead of the root (Supreme God) are watering (worshipping) the branches (the three Gunas, Rajgun-Brahma, Satgun-Vishnu, Tamgun-Shiv Ji). No happiness can be achieved by that sadhna, which means that if the plant will dry out, then you will not be able to sit in its shade. The essence is that doing baseless bhakti is a useless endeavour. There is no benefit out of it. It is also evident in Holy Gita, Adhyay 16, and Shlok 23-24.

To achieve that Supreme God, one has to leave one's imaginary way of worship; surrender to the Complete Gurudev and chant the true Naam/Mantra. Only then, complete salvation is possible. Otherwise, one will go to hell after death.

In the aforesaid sacred speech Shri Nanak Sahib Ji is saying that the Eternal Supreme God is the Naath of all the naaths i.e. is the God of all the gods (is the Lord/ Master of all gods; Shri Brahma Ji, Shri Vishnu Ji, Shri Shiv Ji, Brahm and ParBrahm). I have imbibed the true naam/mantra (Sachcha Naam) in my heart. Oh Supreme God! You are the basis of everyone's life. You are my Master and I am dependent on you. You only came in the form of Satguru and by giving the decisive knowledge of true bhakti, settled the whole row i.e. resolved all the doubts.

It has been clarified in the aforesaid sacred speech that Oh (Hakka Kabir) Sat Kabir, You are (Koon Kartar) Shabd Swaroopi Ram who does creation by the power of shabd i.e. You are the Creator of the entire nature; You only are (beaeb) flawless (Parwardigaar) Nuturer of all and (Karim) the kind God. I am the servant of Your servants.

It has been proved in the aforesaid sacred speech that the weaver (Dhaanak) in Kashi is the Creator (Kartar) of the entire lineage. With total submission, Shri Nanak Sahib Ji is saying that I am telling the truth that this Dhaanak i.e. Weaver Kabir only is Purna Brahm (SatPurush).

Important: - It has been proved from the indicative knowledge of the above-mentioned evidence that how the nature was created. Now we should attain the Supreme God. This is only possible by taking naam from a Complete Saint.