Why did Mother Durga Curse his Son Brahma? 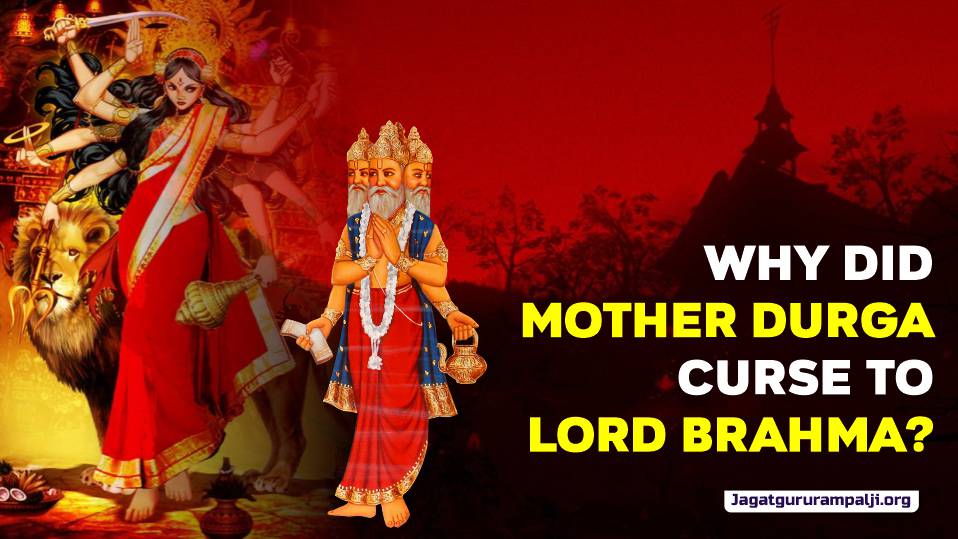 The mother is an epitome of love and affection but if she curses her son how should that be taken? Moreover, If this is in context to God then the sentiments of millions of disciples get hurt. But the truth, as holy scriptures describe, reveal that Goddess Durga out of annoyance on her son’s lie cursed her elder son Lord Brahma to remain non-worshipable. This is also to highlight to the readers that there is a myth amongst people of the world and they believe that Lord Shiva cursed Lord Brahma to remain non-worshipable.

What is the Fact and Myth About Mother's (Durga) Curse to Brahma?

Let us deeply study basis pieces of evidence. To proceed first it is imperative to provide the background why mother (Durga) cursed Brahma.

Actually, Lord Brahma’s father ie. Jyoti Niranjan (Kaal) had taken an oath that he will remain unmanifested / invisible due to which Lord Brahma does not know who is his father. He went to search for him despite Bhavani / Durga told him that he will not be able to see his father.

To this Lord Brahma sworn that unless he meets his father he will not show his face to his mother Durga / Prakriti Devi. In spite of making all efforts, Lord Brahma did not get even a glimpse of Brahm-Kaal (father). Later ashamed Lord Brahma lie to his mother that he has seen his father and has two girls as witnesses (Gayatri and Puhapvati). Let us move what facts are provided in holy scriptures.

The below evidence will prove that it was Goddess Durga who cursed Lord Brahma to remain Non-worshipable.

Mother Durga asked Brahma Did you see your father?" Brahma said, "Yes, I have seen father." Durga said, "Tell me any witness." Then Brahma said, "I saw him in front of these two." The Goddess asked those two girls (Gayatri and Puhapvati), "Did he see Brahm in front of you?" Then the two said, "Yes, we have seen with our own eyes." Bhavani (Prakriti) became suspicious. She thought that Kaal told me that he would never appear before anyone, but these three are saying that they have seen him! Ashtangi meditated and asked Kaal (Jyoti Niranjan) by telepathy,

"What is this story?" Jyoti Niranjan said, "These three are lying." Then, the mother told the three of them, "You are lying. An either voice (Aakash Vani) has declared that these three have not obtained any audience." On hearing this, Brahma said, "Mother, I had sworn to go in search of father (Brahm). But I did not see him (Brahm). I was ashamed of returning to you. Therefore, we lied." Then Mother (Durga) said, "Now I will curse you."

When Brahma heard all this from his mother, he fainted and fell on the ground. He came into consciousness after a long time.

Yes, here one thing is important that Niranjan (Kaal-Brahm) has also made his law that if any living being will hurt a weaker living being, then he will have to pay for it.

Aforesaid, clarifies the Fact-Mother (Durga) Cursed Brahma. Let us move to analyze the myth that people of the world have that Lord Shiva cursed Lord Brahma.

The lokved that people of the world believe provides a description of the verbal dual once erupted between Lord Brahma and Lord Vishnu. Let us study what was that?.

Once there started heated arguments between Lord Brahma and Lord Vishnu to determine their supremacy. This tussle prolonged and both started using weapons in fight, even deities arrived to become witnesses. Since there seemed to be no end to it, therefore, deities went to Lord Shiva to seek his help. Lord Shiva manifested in the form a highly radiant pillar and stood in between both of them.

The end of that enormous pillar was difficult to find. Lord Vishnu acquiring the form of a boar went till Nether World to find its end whereas Lord Brahma acquiring the form of a swan flew up in the sky to find its end. There Lord Brahma met Ketaki flower who told him that he had not been able to find the origin of the highly illuminating pillar even though he is present there since the beginning of the creation.

Any such effort, therefore, will be merely a waste of time. To prove his supremacy Lord Brahma convinced Ketaki flower to give false witness to Lord Vishnu that Lord Brahma is successful in finding the limit of that pillar to which Ketaki flower agreed. Lord Shiva knowing the falsehood of Lord Brahma became annoyed and cursed him ‘You will never be worshipped and that you will possess four heads only.” Lord Brahma accepted his fault and prayed to forgive him. After an apology made by Lord Brahma, Lord Shiva felt pity and provided a boon to Lord Brahma that he will remain the presiding deity in all sacrifices (Yajna). Similarly, Ketaki flower was also cursed that he will not be used during worship.

1). The fact is that Brahm-Kaal (Jyoti Niranjan/Sadashiv) father of Shri Shankar / Mahesh actually rowed the highly illuminating pillar between Lord Vishnu and Lord Brahma during the fight by manifesting in the form of their youngest brother Lord Shiva. Since Sadashiv / Brahm / Kaal remains unmanifested he never appears in his original form, therefore, he appeared in his youngest son Lord Shiva’s form. Then both of them stopped fighting. Brahm-Kaal told them that none of the two is superior. The position and power both hold is the outcome of austerity they did so were rewarded. Hence, they should stop fighting. He never cursed Lord Brahma.

2). Gayatri in some Puranas is wrongly portrayed by earlier sages as the wife of Brahma making her a form of Savitri. But actually, she was a girl created by Durga. Her role was only to bring back Lord Brahma when due to stubbornness he was meditating for four yugas (ages) to meet his father. The entire work of creation in twenty-one brahamands had stopped. Brahm-Kaal (Sadashiv) told Durga he will not appear before Lord Brahma so call him back. Gayatri put forth a desire to have a relation with Lord Brahma so that she can become his false witness but did not marry Lord Brahma. Hence, this is a myth that Gayatri is another name of Saraswati (consort of Lord Brahma). She is a separate entity.

3). Puhapvati the cursed witness later named 'Kevra Ketki' by goddess Durga is portrayed in many Puranas as the Ketaki flower who became the witness of Lord Brahma and was cursed by Lord Shiva. Puhapvati too was cursed by Durga. In fact, Sages have twisted entire facts from holy scriptures and have mislead devotees by narrating stories.