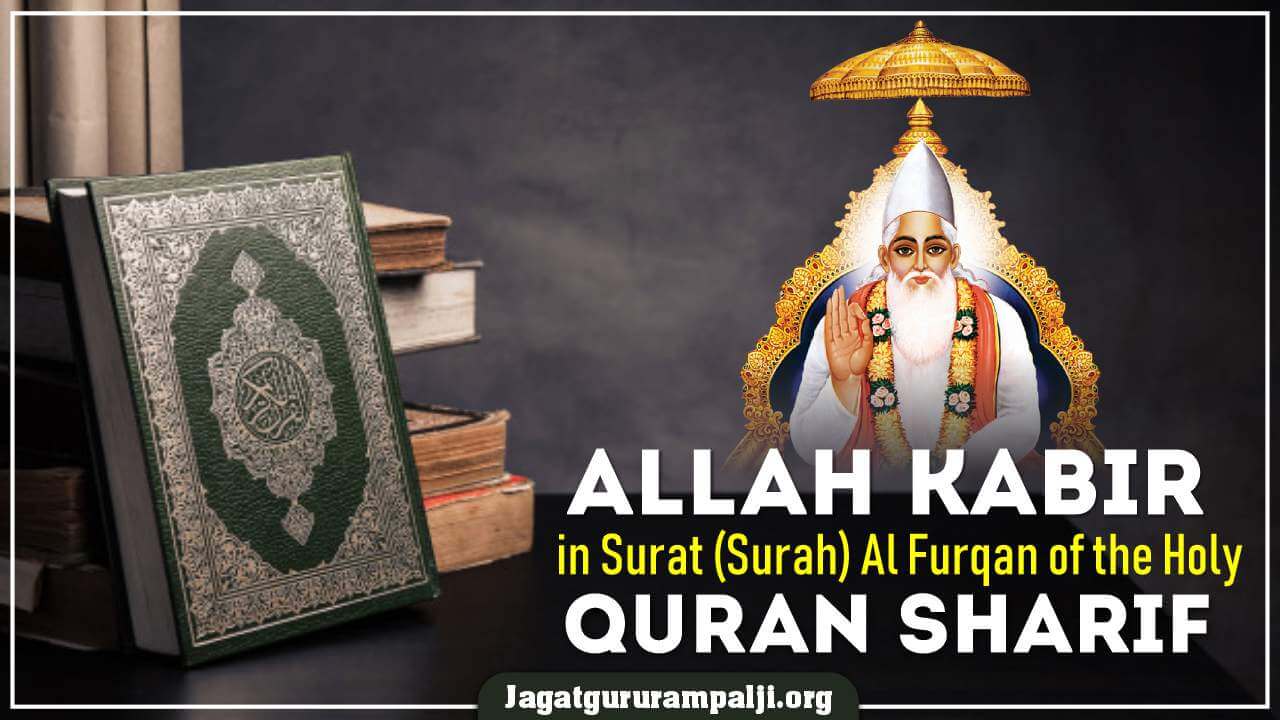 25:52 - So do not obey the disbelievers, and strive against them with the Qur'an a great striving.

25:53 - And it is He who has released [simultaneously] the two seas, one fresh and sweet and one salty and bitter, and He placed between them a barrier and prohibiting partition.

25:54 - And it is He who has created from water a human being and made him [a relative by] lineage and marriage. And ever is your Lord competent [concerning creation].

25:55 - But they worship rather than Allah that which does not benefit them or harm them, and the disbeliever is ever, against his Lord, an assistant [to Satan].

Translation: Prophet Muhammad’s God is saying that Oh Prophet! Do not listen to the kafir (disbelievers, who instead of worshipping one God, worship other gods–goddesses and idols etc) because those people do not consider Kabir as the Supreme God. You may remain firm on the basis of the knowledge of Quran given by me that, Kabir only is the Supreme God, and may struggle (Do Not Fight) i.e. remain rigid for Allah Kabir.

Translation: The God whom Prophet Muhammad regards as his God, that Allah (God) is referring to some other Supreme God; that Oh Prophet! Have faith in that God Kabir, who met you in the form of a Jinda Saint. He is never going to die i.e. He is eternal in reality. And celebrate His sacred glory with praise, that Kabir Allah (God Kabir/ KavirDev) is worthy of being worshipped and is the destroyer of all the sins of His worshippers.

Translation: The God, who is narrating Quran Sharif, is telling Prophet Muhammad that, He is the same God Kabir, who created the entire nature, whatever is between the Earth and Sky in six days, and on the seventh day, sat on the throne in His Eternal Place (Satlok), above. Ask a (Baakhabar – one who is fully acquainted with Him) Tattavdarshi Saint for the information about Him. To know about the real knowledge of that Supreme God and how one can attain Him, ask a Tattavdarshi Saint (Baakhabar); I do not know.

God is in Form & God's Name is Kabir 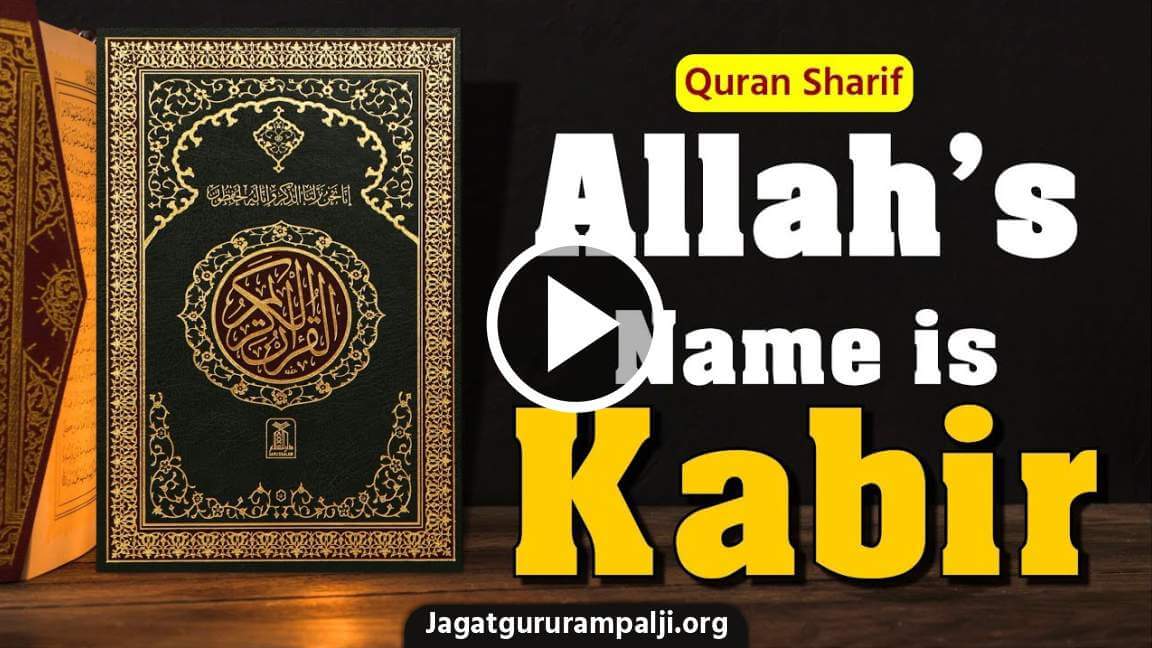 Surah Al Furqan 25:59 - Prophet Muhammad’s God is saying that, Allah is Kabir who created nature in six days and sat on the throne on the seventh day.

The key point here is that God's name is "Kabir" and God sat on his throne which also proves that to sit on a throne God must be in form.

Holy Bible also says the same thing that, God created nature in six days and took rest on the seventh day. It also says that when God made Human Beings, He made them like Himself. This also proves that God is in form.

Holy Quran Sharif however goes a step further and describes that God's name as "Kabir".

Like most names have a meaning, The name "Kabir" also has a meaning and it means "Great" whereas it is actually the name of God.

Prophet Muhammad's God is referring to some other Supreme God

In Surah Al Furqan 25:58 Prophet Muhammad's God is referring to some other Supreme God and is asking Prophet Muhammad to sing the glory of Allah Kabir who is immortal and is worthy of being worshipped.

In Surah Al Furqan 25:59 Hazrat Muhammad's God is asking Prophet Muhammad to ask a Baakhabar (one who is fully acquainted with the knowledge of God - A Tattavdarshi Saint) about the way to achieve that Supreme God, and says that he does not have the full knowledge.

Likewise, in Holy Bhagwad Gita Adhyay 4, Shlok 34 the God narrating Gita is instructing Arjun to go in to the refuge of a Tattavdarshi Saint to find the way of attaining the Supreme God. 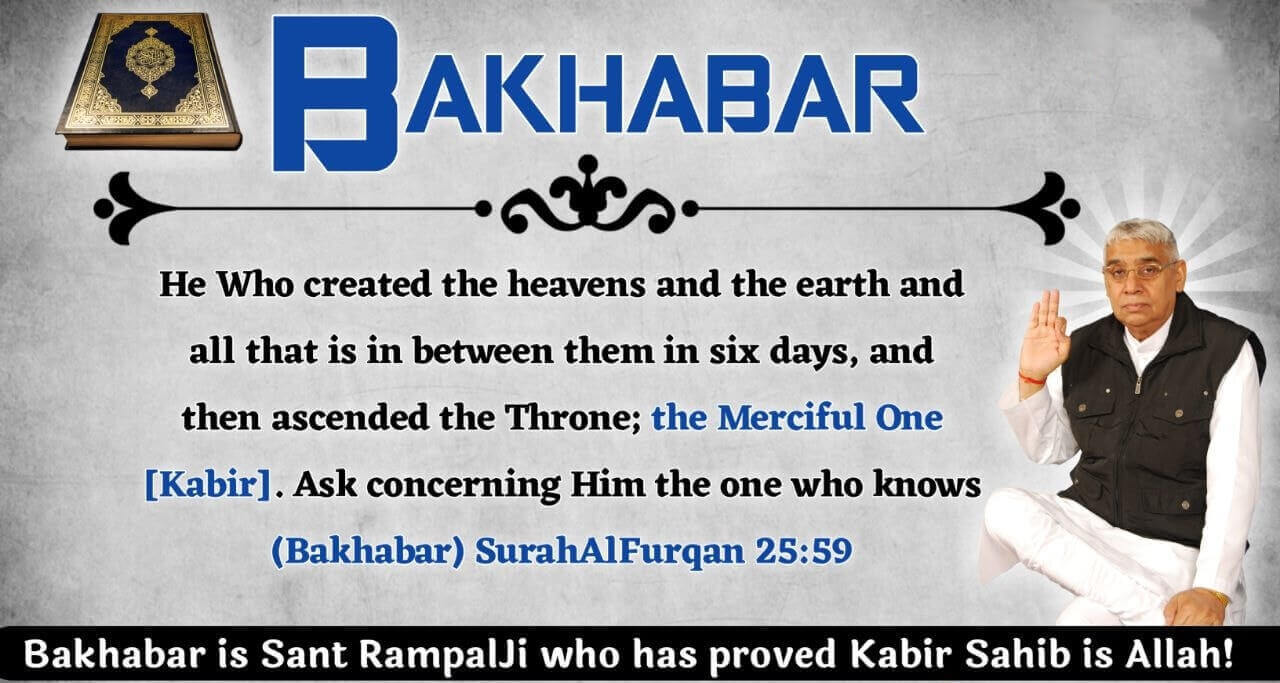