How did the name Kavir (Kabir) Dev come in Vedas 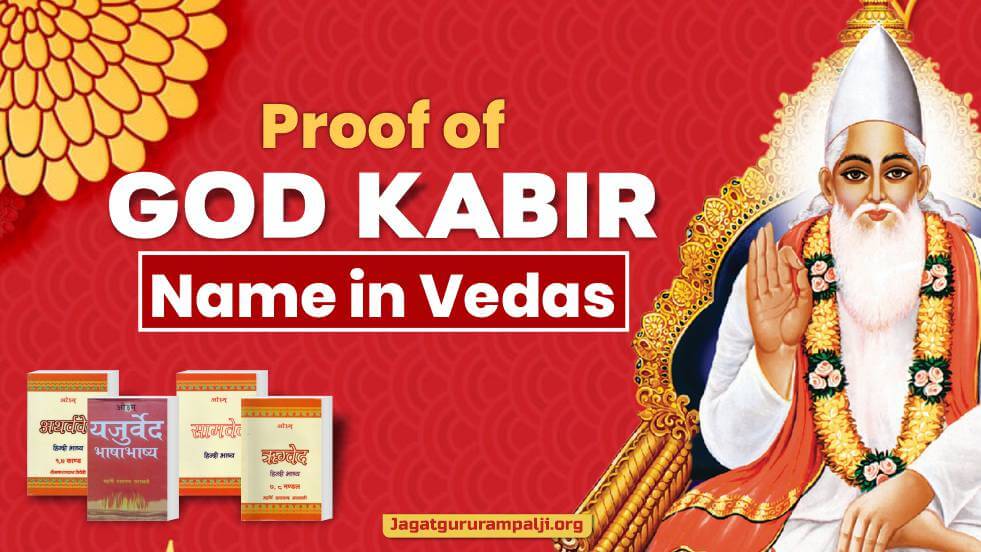 Kabir; whom people, to date; simply consider a poet descended 600 years ago from the eternal world ‘Satlok’ in the year 1398 C.E. in Kashi-Varanasi and stayed on earth playing the divine spectacle of a weaver. He was in fact, Almighty God Kavir Dev the creator of the universe. He is Param Akshar Purush, Supreme God. His body is highly effulgent. He is enthroned like a King in ‘Satlok’. He does not take birth from a mother’s womb. God Kabir comes in every yuga (age) on earth intending to liberate innocent souls from the web of the butcher Brahm-Kaal by imparting true spiritual knowledge. Holy books – pious Vedas; provide evidence about his identity and the spectacles he does on earth. God Kabir departed the earth along with his body from Maghar in 1598.

However, there are certain enduring questions in the mind of people regarding the name Kabir which have been answered in FAQs below.

Question - How did the name Kavir i.e. Kabir come in Vedas? Vedas were obtained at the beginning of creation. Kavir Dev (Supreme God Kabir) originated in 1398 A.D.

Answer - The actual name of the Supreme God is KavirDev. His other names are SatPurush, Param Akshar Brahm, Purna Brahm, etc. Like, the name of the body of the prime minister of a country is something else and Pradhan Mantri, Prime Minister are the names of the post. This very Supreme God Kabir Dev by changing names has come in all the four yugas and was also present in a human-like visible body in Anami (Anamay) lok by the name Kabir Dev before the creation of nature and the Vedas. The same KavirDev, after creating Satlok, then became seated in Satlok. Thereafter, He created all the loks (regions) of ParBrahm and Brahm-Kaal (Jyoti Niranjan) and the Vedas; therefore, there is a description of KavirDev in the Vedas.

Also read Who is Supreme God

Note: God Kabir Sahib Ji appears in all four ages as an infant and makes one disciple through which Kabir Panth (cult) is propagated.

Question – What was the name of Almighty Kavir Dev in Satyug? Whom did he meet?

Answer – According to the constitution of God, KavirDev comes in all ages on earth to impart true spiritual knowledge to his dearest virtuous souls. The same Almighty KavirDev came in Satyug and became famous by the name ‘Satsukrit’. He appeared on the Lotus flower in a pond from where a childless Brahman couple aged 55-60 years named ‘Vidhyadhar’ and his wife named ‘Deepika’ took the child form God and nurtured Him. At that time, God Kabir gave true spiritual knowledge to Shri Garud Ji, Trimurti Gods ie. Shri Brahma Ji, Shri Vishnu Ji, and Shri Shiv Ji, also to Shri Manu Ji. None of them agreed with the spiritual knowledge given by Kabir Ji therefore, people started calling him ‘Vamdev’ ie. one who provides spiritual knowledge which is opposite to the belief in Brahm-Kaal’s region. God made one 'Sehtey Ji' his beloved soul his disciple and after explaining him the nectar knowledge made him a resident of Satlok.

Question – What was the name of Almighty Kavir Dev in Treta Yuga? Whom did he meet?

Answer: – In Treta Yug God Kabir was present on earth in the form of sage Muninder. He met the same soul of ‘Vidhyadhar’ Brahman named ‘Sage Vedvij’ and his wife; the same soul ‘Deepika’ whose name was ‘Surya’. They were the childless couple who served God as an infant. Almighty KavirDev ie. sage Muninder Ji met Rama (son of King Dashrath), Nal-Neel, Hanuman, Mandodari (wife of the King of Lanka ie. Ravana) and ‘Vibhishan’ the younger brother of Ravana. Almighty KavirDev blessed Ramchandra Ji build the famous ‘Ramsetu bridge’ with the help of his army (Nal-Neel and others) which joins coastal region of South India with Srilanka after which the battle was fought between Rama and Ravana and Sita was brought back. At that time, God also made one ‘Bankey Ji' his beloved soul his disciple, provided him true mantras, and made him a resident of Satlok.

Question – Did Almighty Kavir Dev manifest in Dwapar Yuga? Whom did he meet?

Answer – In Dwapar Yuga, God Kabir was famous by the name ‘Karunamay’ whose upbringing was done by a childless couple in ‘Valmiki’ caste named Bhikhu and his wife Godavari. This childless couple took an infant form of God who appeared on a Lotus flower and did His upbringing, therefore, He was also called ‘Valmiki’. One Gangeshwar Brahman, his son Ganesha and one Supach Sudarshan from the same Valmiki caste became his disciple. God as sage Karunamay met the five sons of Pandavas ie. Yudhisthir, Bheem, Arjun, Nakul, and Sahdev, also He met Shri Krishan Ji and Draupadi and blessed them by being a part of the feast which was given by ‘Pandunandans’ on the advice of Shri Krishan to nullify their sins cropped on them after the fierce battle of Mahabharata. God Kabir took Queen Indramati in the refuge. Also, the famous Jagan Nath temple in Orissa was built by the grace of Almighty KavirDev. The Supreme God Kabir also chose a beloved soul named ‘Chaturbhuj’ for propagating the cult and by providing him the true spiritual knowledge (Tatvagyan) God transcended this beloved soul.

Question – What was Almighty Kavir Dev’s manifestation in Kalyug? Whom did he meet?

Answer – 600 years ago in ‘Shukla Paksha’ on the full moon day (Purnima) of Jyeshta month Vikram Samvat 1455 (1398 AD) on Monday in Brahm Muhurta God Kabir acquired the child form and manifested as an infant on Lehartala pond on a Lotus flower in Kashi-Varanasi. Sage Ashtanand Ji was the eyewitness of this divine spectacle. Neeru-Nima, a childless couple (they were the parents of Supach Sudarshan the disciple of God in Dwapar Yuga) took God Kabir from the pond and served him like their son. In Kalyug Almighty Kabir was famous by his original name ie. Kabir who used to impart true spiritual knowledge through couplets, proverbs, verses, and people thought He is simply a poet. God met the founder of Sikhism ie. Guru Nanak Dev Ji, Swami Ramanand Ji, respected Dharamdas Saheb Ji, and a few more. He liberated the same soul ‘Deepika’ whom He took in refuge in ‘Satyug’ in her human birth in Kaliyuga as ‘Kamali’.

Question – Does Almighty Kavir Dev otherwise also manifest on earth anytime? What is the purpose of His manifestation?

Answer – Yes, God Kabir manifests to meet His virtuous souls anytime. He descends from His eternal abode ‘Satlok’ with speed, whole bodily. The purpose remains the same ie. to make familiar his ignorant souls about their native world ‘Satlok’ and relieve them from the trap of Brahm-Kaal the devil. That omnipotent Lord, that ‘Param Akshar Brahm’, Kavir Dev himself tells about his own creation of the universe.

Likewise, He explains the true spiritual knowledge time and again and later he disappears.

Question – Is there mention of manifestation of God Kabir in other religions?

Answer – Yes, In all the holy books-Quran Sharif, Quran Majid, etc of Islam religion Almighty KavirDev is greeted by the name ‘Kabira’, ‘Kabiran’, ‘Khabira’, ‘Khabiran’. God Kabir only is Allahu Akbar. God Kabir maintains faith in devotion by making many forms. He also performed  Al-Khidr's Divine Play. Muslims believe that Al-Khidr is immortal and is still alive on earth and guides those who are confused on the path of Allah. 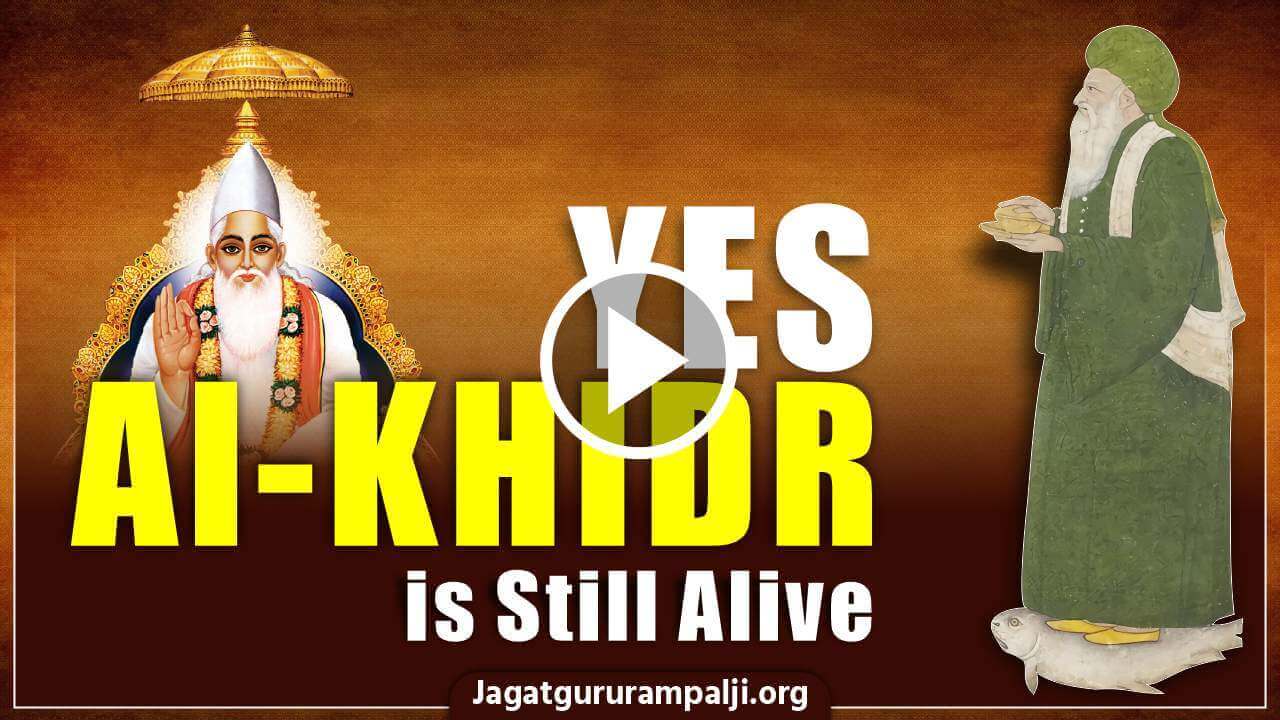 In this very context, Saint Garibdas Ji has said that: -

Similarly, Holy Bible provides evidence that El-Kabir is the same Almighty KavirDev. In all Bible translations, the word Kabir is translated as ‘great’ or ‘mighty’, whereas Kabir is the name of the Supreme God mentioned in every scripture.

Question – Does Almighty Kavir Dev play the divine act of a Tatvadarshi Saint? How to identify a Satguru?

Answer – Srimad Bhagavat Gita Adhyay 15 Shlok 1-4 and 16,17 provides evidence of the identity of a Tatvadarshi (Enlightened) saint. Yes, Almighty Kabir himself plays the role of a true spiritual leader. He only acts as Satguru who imparts true spiritual knowledge to his beloved souls, provides true salvation mantras chanting which the souls attain salvation.

At present Jagatguru Tatvadarshi Sant Rampal Ji is a living Satguru on earth.

Important - Aforesaid clarifies, all holy books mention Kabir is God. People should not have any doubts. The same weaver of Kaashi, the same poet was Almighty Kabir.

← Truth About Establishment of Kedarnath Temple