Who is the Supreme God & What does He look like 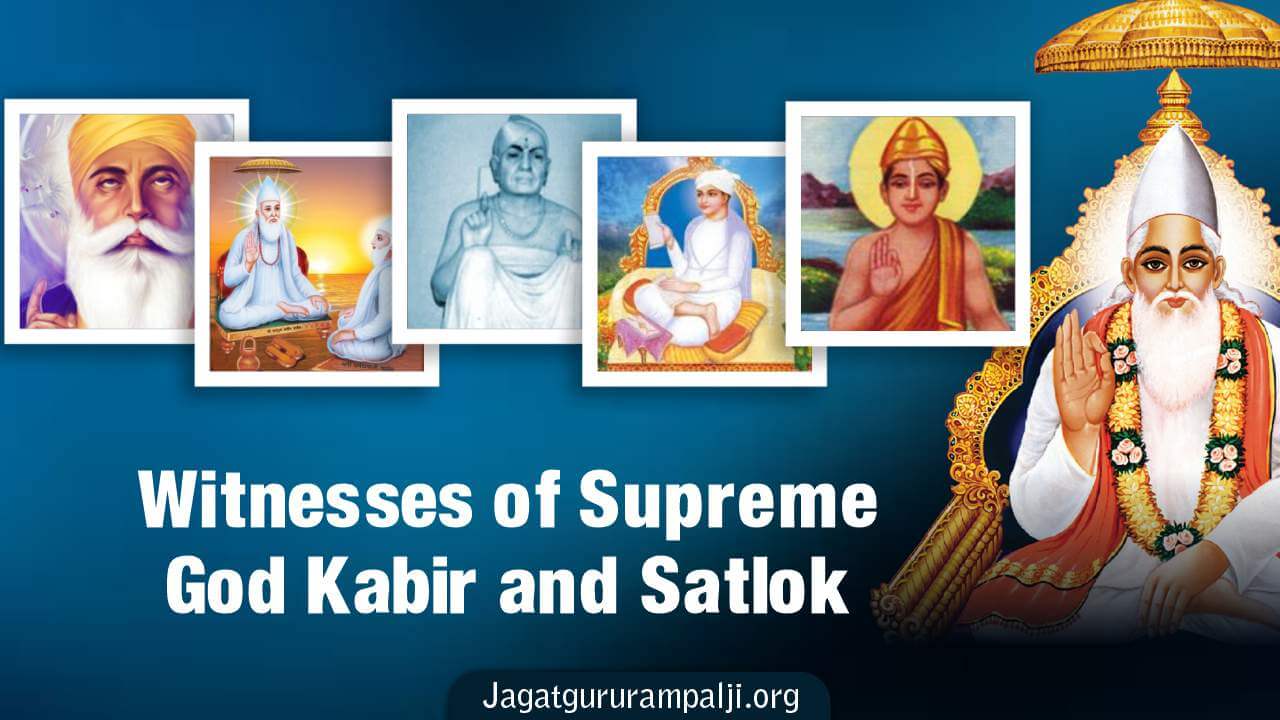 This Supreme God's synonymous names are Anami Purush, Agam Purush, Alakh Purush, SatPurush, Akaal Moorti, Shabd Swaroopi Ram, Purna Brahm, Param Akshar Brahm etc. For instance, the name of the body of the prime minister of a country is different to its title (Designation). The same prime minster sometimes is also the home minister if he keeps the portfolio of the home ministry. In a similar manner, we have to understand the power of God.

The saints and sages, who did not attain God, have described their final experience that only the light of God can be seen. God cannot be seen because He does not have any form, and hearing the sound etc in the body is the achievement of the Bhakti (worship) of God.

Let us ponder:  How much does a blind person know if he says that Sun is self illuminated, only its light can be seen, the sun itself is formless and it cannot be seen. Only someone with eyes who has seen the sun can tell them that the sun is in form and the light is being emitted from it only. For instance, if someone says that I saw tube light, and then someone asks him, how does a tube look like whose light you have seen? He gets the answer that the tube because of being formless is invisible. Only the light can be seen.

If someone says that a diamond is self-illuminated, and then also says that only the brightness of the diamond can be seen because the diamond is not visible, then that person is not familiar with a diamond. He has worthlessly become a jeweller. Those who say that God is formless and only consider seeing light and hearing sound as the attainment of God, they are completely unfamiliar with God and worship. They are themselves ignorant and are misleading their followers and thus are being guilty. They in reality are blind and do not have the 'eyes of knowledge'. On being told the truth, all those blind men devoid of the eyes of wisdom raised sticks saying that you mean that we all are liars and only you are truthful! Today Sant Rampal Ji Maharaj is in a similar state.

How can this debate be concluded that which saint's view points are right and whose are wrong? Let's suppose that five lawyers are expressing their views on a particular crime. One says that section 301 of the constitution will apply to this crime, another says 302, the third person says 304, fourth one says 306 and the fifth lawyer tells 307 to be the correct one. All these five cannot be right. Only one can be right if his description matches with the country's constitution. If his description is also opposite to the constitution, then all the five lawyers are wrong. The constitution of the country which is acceptable to everyone will decide this.

Similarly amongst the different viewpoints and sadhnas (ways of worship) which one is in accordance with the scripture and which one is against the scriptures, only the true Holy Scriptures will decide this, which should be acceptable to everyone. (This evidence is also in Shrimad bhagwat Gita Adhyay 16 Shlok 23-24).

Amongst those eyed men (Complete Saints) who saw the moon (Supreme God), the names of a few are:

Supreme God Kabir met Dharamdas in the form of a Jinda Saint in Mathura and took him to Satlok. In Satlok God Kabir showed Dharamdas two forms (God & Jinda Saint) and then sat down on the throne of Supreme God in the Jinda form and said to Respected Dharmdas Ji that I myself have gone to Neeru-Neema's house in Kashi (Banaras). I work as a (dhaanak) weaver there. Respected Shri Ramanand ji is my Guru ji. Saying this God Kabir sent Shri Dharmdas ji's soul back into his body. Shri Dharmdas ji's body remained unconscious for two days and gained consciousness on the third day. On searching in Kashi, Dharamdas found that this weaver who has come in Kashi is himself the Supreme God (SatPurush). 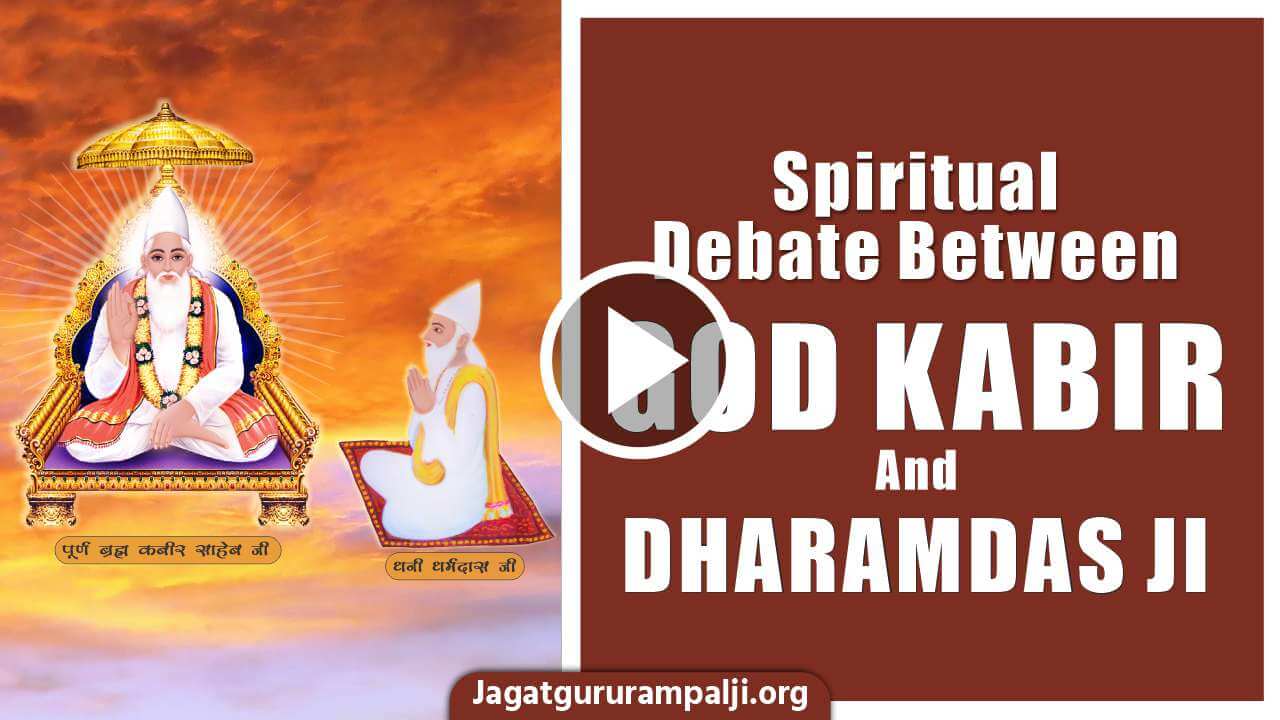 When Respected Dadu Sahib ji was a seven year old boy, Supreme God met him in the form of a Jinda Saint and took him to Satlok. Dadu ji remained unconscious for three days. Then on gaining consciousness he uttered numerous sacred speeches of the eye-witnessed glory of the Supreme God Kabir which are as follows:- 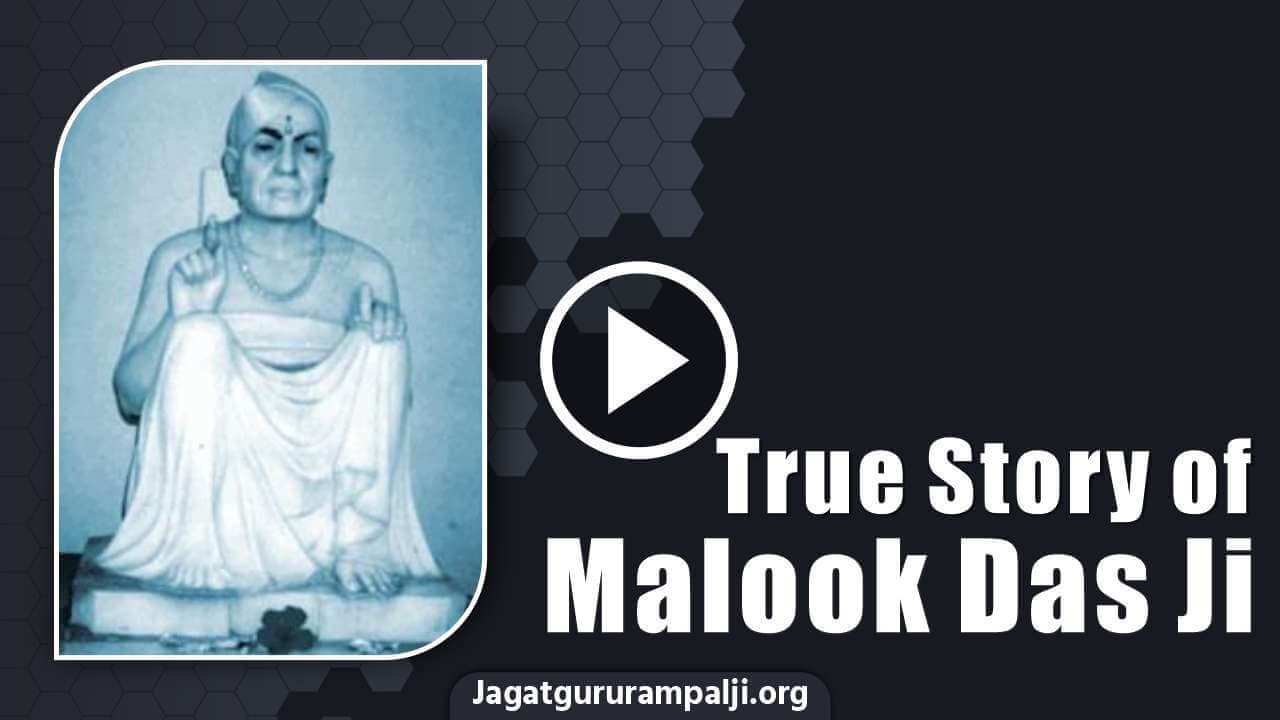 Respected Garibdas Sahib ji was born in 1717 A.D. He met God Kabir Ji at the age of 10 years in a field named Nalaa in 1727 A.D. and departed to Satlok in 1778 A.D. God Kabir also met Respected Garibdas ji in an embodied Jinda Saint form. At the time Respected Garibdas ji along with his other fellow milkmen was tending his grazing cattle in his Nalaa field (which is sticking to the boundary of Village Kablana). The milkmen requested Supreme God Kabir who had appeared in the form of a Jinda Saint that if you are not going to have food, then have milk because God had said that I have come after having food from my Satlok village. Then, God Kabir said that I drink milk of a maiden cow. Child Garibdas ji brought a maiden cow to Supreme God Kabir ji and said that Baba ji, how can this maiden cow give milk? Then God Kabir patted on the back of that maiden calf; automatically milk started flowing from the udders of the maiden calf and stopped when the pot became full. Supreme God Kabir drank that milk and made child Garibdas drink some as prasaad (blessed drink), and showed him Satlok. Showing His two forms in Satlok, God Kabir then sat on the throne in Jinda form as the Master of all, and said that I myself have lived in Kashi for 120 years as a weaver (dhaanak). I had also met Prophet Muhammad earlier. In Quran Sharif, the words Kabira, Kabiran , Khabira, Khabiran , Allahu Akbar etc point towards me only, and I only met Shri Nanak Ji in form of a Jinda Mahatma on the bank of river Bein {Jinda Mahatmas are in Muslims, who wear a black knee-length cloak (like an overcoat) and wear a conical hat on head}, and I only had met king Shri Abrahim Sultan Adham in Balakh city and Shri Dadu Ji and in all the four Vedas, the names KavirAgni, KavirDev (KaviranghariH) etc are indicating towards me alone. 'Kabir bed humaara bhed hai, main milu bedon se naahin jaun bed se main miloon, vo bed jaante naahin || ' I only was sitting in Satlok much before the Vedas.

(In Village Chhudani, District Jhajjar, Haryana, even today a memorial is present in that jungle where Sant Garibdas ji had seen and met Supreme God in a human body.) After the departure of the soul of Respected Garibdas ji with God Kabir, the villagers considering Garibdas dead, placed him on a pyre and started preparing to cremate him. At that very moment, Supreme God penetrated the soul of Respected Garibdas ji back in his body. Instantly ten years old boy Garibdas became alive. Thereafter, Garibdas ji created a book named 'Satgranth' of his sacred speech on the eye-witnessed account of that Supreme God. Evidence of this account is in that same sacred speech:-

Supreme God Kabir himself came in the form of Jinda Mahatma from Satlok and took me to the Ajab Nagar (Strange/remarkable city Satlok). Where there is only happiness, there is no worry; no birth-death; there is no grief of the sufferings in the bodies of other living beings.

This very SatPurush, who had come in Kashi city as a weaver, by appearing at different-different times had conveyed across Respected Abrahim Sultan Adham and Respected Dadu Sahib ji and also Respected Nanak Sahib ji by giving them Satnaam. That same KavirDev (God Kabir) whose one hair follicle has brightness similar to that of crores of suns and is visible like a man, by putting another body of faded masses of lights over His actual bright body (bhadra vastra i.e. body of lights) meets us in this mortal world because the naked eyes cannot bear the light of the actual form of that Supreme God.

Respected Garibdas Sahib ji has said in his sacred speech 'Sarv kalaa Satguru Saheb ki, Hari aaye Hariyaane nu ' The meaning is that the area where Supreme God Kavir Hari came, its name is 'Haryana' i.e. 'a holy place where God came'. Because of which started calling the nearby regions as Hariaana (Haryana). In 1966 A.D. on the division of the Punjab state, this region got the name Hariaana (Haryana). The speech spoken around 236 years ago proved right in 1966 that when the time will come, this region will become popular as the Haryana state, which is clearly evident today.

God Kabir appeared before Shri Nanak Dev Ji on the bank of river Bein and took him to Satlok (Sachkhand) and showed him His SatPurush form and then on the third day left him back on the Earth. After that Shri Nanak Ji eulogised the eye-witnessed glory of God Kabir, which is present in his sacred speech in Shri Guru Granth Sahib in Mehla Pehla. Only after God Kabir gave Shri Nanak Ji jaap of Satnaam, Shri Nanak Ji got liberated from Kaal’s lok.

Therefore, in Guru Granth Sahib, on page no. 721 in his sacred speech, Mehla 1, Shri Nanak ji has stated that -

In the above-mentioned sacred speech, Shri Nanak Sahib ji is himself accepting that Sahib (God) is only One, and he (Shri Nanak ji) also had a living guru in human form about whom he has said, "I gained Tatvgyan (true spiritual knowledge) from the Complete Guru, and my Guru ji gave (nectar naam) eternal mantra i.e. updesh naam mantra, which provides complete salvation, to me. That same guru of mine acquires different forms i.e. He only is SatPurush; He only acquires Jinda form. He only sitting in the form of a weaver (dhaanak) in Kashi city is also playing the role of an ordinary person i.e. devotee. Seeing the whole world burning in the fire of birth-death and the results of their actions because of doing worship opposite to the scriptures, running with the fear of my life being wasted, I took refuge in Guru ji's feet. 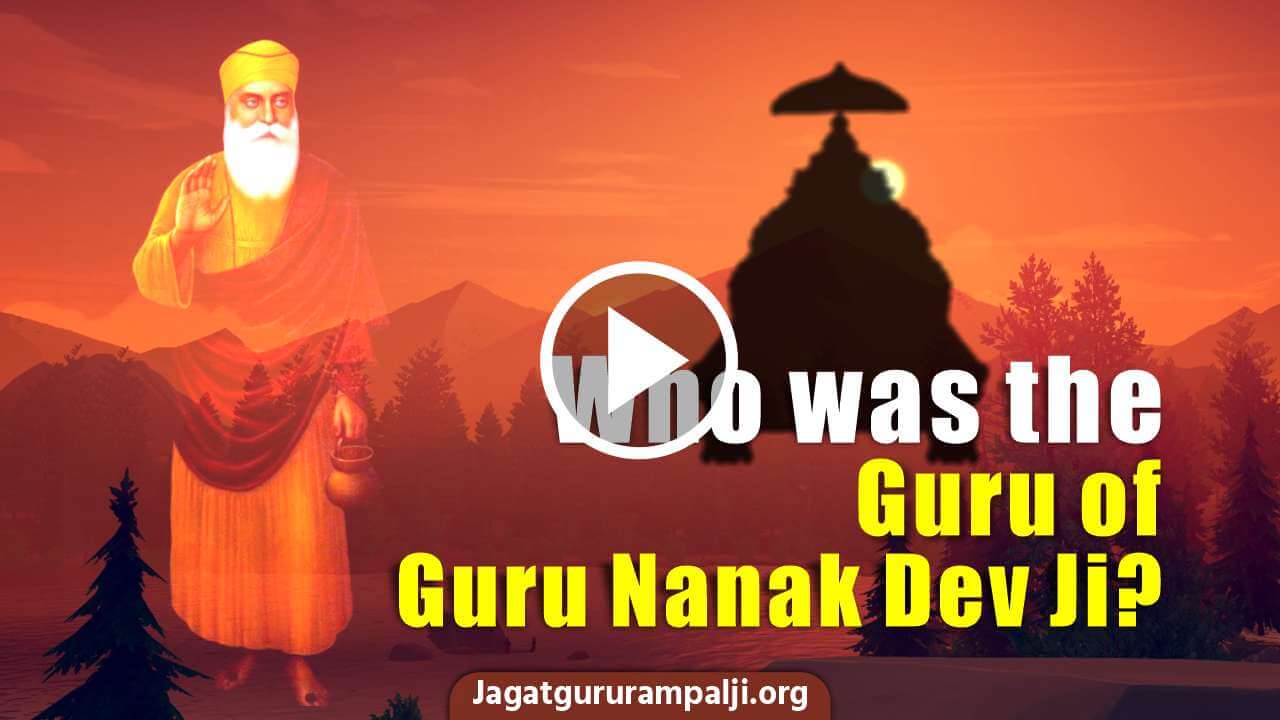 The meaning is that the Supreme God assuming a Jinda form came on the bank of river Bein i.e. became known as Jinda, and You yourself creating the two worlds; above (Satlok etc) and below (loks of Brahm and ParBrahm), sitting in form on the throne in Satlok above, are relishing beholding the worlds created by you; and You only are Self-existent (Swayambhu) i.e do not take birth from a mother, You manifest Yourself. This evidence is also in Holy Yajurved Adhyay 40 Mantra 8 that "Kavir maneeshi swayambhuH paribhu vyavdhaata", meaning is that God Kabir is omniscient (the meaning of 'maneeshi' is omniscient) and (is Swayambhu) manifests Himself. He is eternal (Paribhu) i.e. the First God. He is the 'Vyavdhaata' of all the brahmands i.e. is the Creator of all the different loks.

The meaning is that Shri Nanak Sahib ji is saying that this soul of mine kept wandering in the cycle of birth and death for a long time, now the Purna (Complete) Satguru granted me the real naam.

The previous births of Shri Nanak ji are - King Ambreesh in Satyug, King Janak in Tretayug, and then became Shri Nanak ji in Kalyug and there is no count of the births in other life-forms.