How was the Temple of Vaishno Devi Established 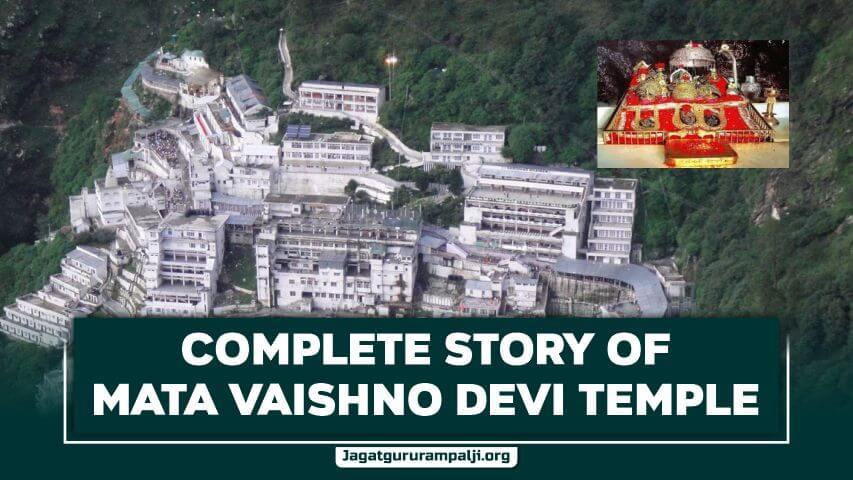 According to the Hindu religion, Vaishno Devi created from the collective energy of three Goddesses Gauri, Laxmi, Saraswati is also called Mata Sherawali/Pahadawali/Latawali. Vaishno Devi is none other than the form of Goddess Durga who is depicted in idols and pictures as riding upon a Lion (or Tiger) holding various weapons. Millions of devotees visit Vaishno Dham every year intending to receive blessings from Goddess. However, there are a few legends associated with the establishment of the temple of Vaishno Devi which when read and compared with Hindu religious books (Vedas and pious Gita Ji) have proved that visiting the temple of Vaishno Devi holds no religious significance. This is simply blind worship.

Let us analyze myths and facts regarding the establishment of the temple of Vaishno Devi.

Myth Regarding the Establishment of the Temple of Vaishno Devi

People of the world; based on the legend narrated by contemporary sages, saints since ages believe that Goddess Vaishnavi was created by the power of three Goddesses Gauri, Laxmi, Saraswati during Treta Yug when the earth was overburdened by the devilish and tyrannical rule of demons; to rid the earth from imminent dooms. After she completed the task of destroying the demons she was requested to reside on earth so that she may forever keep all evil at bay. The devout Vaishnavi since childhood worshipped Lord Vishnu which she continued till adulthood and performed severe penance to win Vishnu Ji as her husband. Lord Ram alias Lord Vishnu appeared to her and promised that one day he would surely return to her and if she recognizes him he will marry her. Presently, he cannot marry; since he is already married to Sita and is in search of her because Ravana; the demon King of Lanka, has abducted Sita.

A fierce battle was fought between Ram and Ravana and Lord Rama finally rescued Sita, while Vaishnavi waited for his return. Lord Vishnu disguised as an old man approached her one day and proposed to marry to whom she refused. Hence, she failed to recognize Vishnu Ji. After that, Lord Rama promised Vaishnavi that he will marry her in his 10th incarnation as ‘Kalki’ in Kalyug, till then she should perform austerity in ‘Trikuta’ hill and shall wait.

Bhairon Nath a local Tantrik stupefied by her beauty stalked her and Vaishnavi did penance in a cave for nine months and hid from Tantrik Bhairon Nath. Later, he spotted Vaishnavi and while he was forcing himself upon her, Vaishnavi acquired the form of Goddess Mahakali and severed his head with her sword. After that, Vaishnavi reentered her cave and assumed herself in the form of three rocks (Pindis) which represent Goddess Saraswati, Mahakali, Mahalakshmi. Over the period this place became popular by the name ‘Vaishno Devi’ and millions of innocent devotees started visiting every year.

Does the legend that Vishnu Ji will marry Vaishnavi in his 10th incarnation as ‘Kalki’ hold evidence from any holy scripture?

This is merely the trap of Brahm-Kaal which needs to be understood by seekers. Durga and her husband Jyoti Niranjan-Kaal simply deceive by spreading such folklore through their agents like contemporary ignorant sages to keep innocent devotees in maze thus, make them do useless idol worship and not worship the Supreme God.

Durga’s holding various weapons and severing the head of Tantrik Bhairon Nath signifies that these deities are incapable and for their safety, they are dependent on weapons to protect themselves during a crisis. Also, bloodshed is the solution for a problem in the region of Brahm-Kaal which only raises sins and is counted in bad deeds which have to be borne.

The narration of the episode of Tantrik Bhairon Nath proves that vices like lust cannot be destroyed with arbitrary worship.

Important: Brahm-Kaal has spoiled the conduct of every creature in his twenty-one universes by keeping them engaged in performing useless idol worship and visiting temples and various places of pilgrimage which is strictly prohibited in Srimad Bhagavad Gita chapter 16 verse 23-24. Idol worship is simply blind worship and provides no spiritual benefits. This is arbitrary worship which leads souls to suffer in 84 lakh life species due to which they remain trapped in the web of Brahm-Kaal.

If by worshipping stones/rocks God is found then I will worship mountains.

The fact is, God is in human form. He is visible like a man who walks talks and meets virtuous souls. All Holy scriptures provide evidence about God. he is not found in stones. The belief that Vaishno Devi is seated in ‘Pindi’ form of three Goddesses is a pure myth.

Therefore, Innocent devotees should make a deep assessment of their way of worship and try to analyze.

Fact Regarding the Establishment of the Temple of Vaishno Devi

When Sati Ji (Parvati Ji) died as a result of burning after jumping in the fire-pit of her father King Daksh, God Shiv Ji out of affection considering her skeleton as Sati Ji (Parvati Ji), keeping it on his shoulder, kept wandering like a mad man for ten thousand years. God Vishnu Ji broke the skeleton of Sati Ji into pieces with his ‘Sudarshan Chakra’. Where the trunk of that skeleton fell, it was buried there in the ground. To maintain the memory of this religious incident, a temple-like monument was built over it so that in the coming times no one should say that incorrect information is given in the Puranas. They kept a picture of a woman in that temple and started calling her ‘Vaishno Devi’. A nobleman was appointed to look after it and to narrate the story of that place to the devout visitors. Other religious persons used to give him some wages. 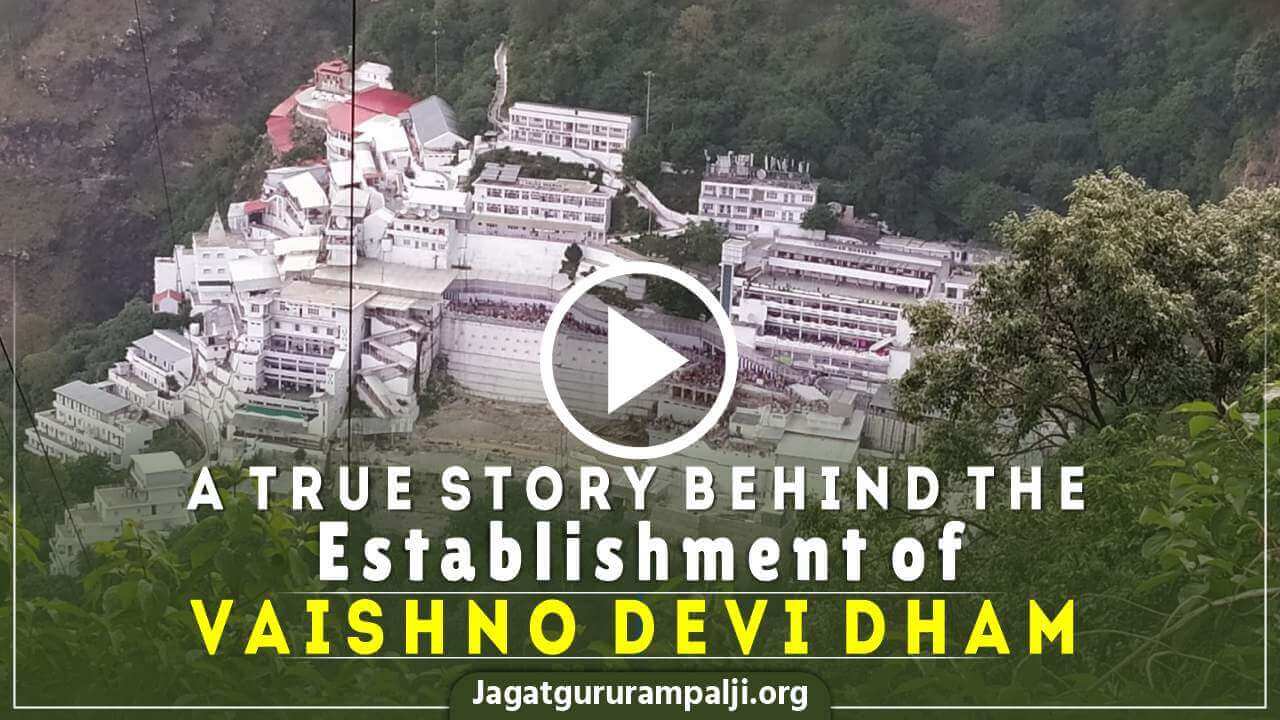 Later, the Descendants of that person started taking gifts (donations) there and started making false stories. They started saying things like,

Please Ponder: With the false stories narrated to innocent devotees, it appears as if Goddess is greedy and showers blessings when money is offered.

In this way, innocent souls by trusting these baseless stories forgot the teachings of Holy Bhagavad Gita and Holy Vedas, in which all these religious practices have been mentioned to be devoid of the injunctions of scriptures. Because of which neither is there any happiness, nor is any task accomplished nor is the supreme state i.e. salvation attained (Evidence: Holy Gita Adhyay 16 Shlok 23-24).

Likewise, where Devi's eyes dropped, there Naina Devi temple and where tongue fell, there the temple of Shri Jwala Ji was established.

This is the fact regarding the establishment of the temple of Vaishno Devi.

Goddess Durga/Maya/Ashtangi created by Param Akshar Purush ie. KavirDev is the epitome of ‘Shakti’ who bears the power to multiply. She can appear in many forms anywhere anytime. In Shrimad Devi Bhagwat chapter 5 verse 12 she admits to Brahma Ji that Gauri, Brahmi, Raudri, Varahi, Vaishnavi, Shiva, Varuni, Kauberi, Narsinghi, and Vasavi are all her forms. Durga Ji has spread the web of illusion in which the whole world is confused. Saints call Durga a serpent who produces and later kills her children. She is a deceiver. There is no benefit worshipping her since she is not the provider of salvation.

While explaining the spiritual knowledge to King Himalaya Goddess Durga provides the eloquent description of Brahm-Kaal (her husband) and tells to worship Brahm-Kaal with reverence who lives in “Brahmlok”, chant ‘OM’ mantra. Durga Ji even condemns her worship. This signifies there is no benefit worshipping Goddess Durga since she herself is in the cycle of birth and death. She cannot provide salvation. The devotees may visit Vaishno Dham just for the sake of visiting but with the belief that Goddess is seated there and her power will shower blessings on them is sheer foolishness.

The dialogue between Shri Vyas Ji and King Janmajay states that the discourse of the enlightened saint ie. Chitshuddh (discourse that purifies soul) is superior to all tirth. If a devotee, fortunately, happens to attend the spiritual discourse of a Tatvadarshi Sant then the soul purifies. No visit to any place of pilgrimage is required since it is a sheer wastage of human life. All tirth is useless only Chitshudh (purifying soul) tirth is Supreme. The spiritual discourse of the true spiritual leader purifies the soul with which welfare (attainment of salvation) of the creature is possible. By chanting true mantras provided by the enlightened saint the souls get liberated and attain eternal peace.

What is the Real Salvation Mantra of Vaishno Devi?

The human body has channels located in the spine from the base till the crown of the head. Each channel is governed by a specific deity. Goddess Durga resides in ‘Kanth Kamal’ (neck). She has a unique mantra which is provided only by an authorized saint which; when chanted with proper procedure, provides benefits to the seekers. Any other way to please Goddess like worshipping in the temple of Vaishno Devi and the like is all useless.

Saint Rampal Ji is that authorized saint who has that precious mantra and provides to the virtuous souls chanting which Vaishnavi/Mehrawali/Latawali/Pahadawali/Sherawali ie. Goddess Durga gets pleased and showers blessings on her devotees.

Every human being in the twenty-one universes of Brahm-Kaal wishes to attain just the materialistic pleasures, forgetting that the sole aim of human birth is to do true worship and attain salvation. Innocent disciples visit to worship Vaishno Devi ie. Goddess Durga in Vaishno Dham but fails to understand the true aim of human birth.

This is the advice to all devotees; stop visiting Vaishno Devi Dham or even any other pilgrimage. Goddess is not seated there.

Jagatguru Tatvadarshi Saint Rampal Ji Maharaj is the true spiritual leader who is providing scriptures based worship doing which all creatures will land back to their native world ‘Satlok’. Identify God; take refuge and make the most of the precious human birth.