Information about the Tradition of Gaddi (native seat) and Mahant 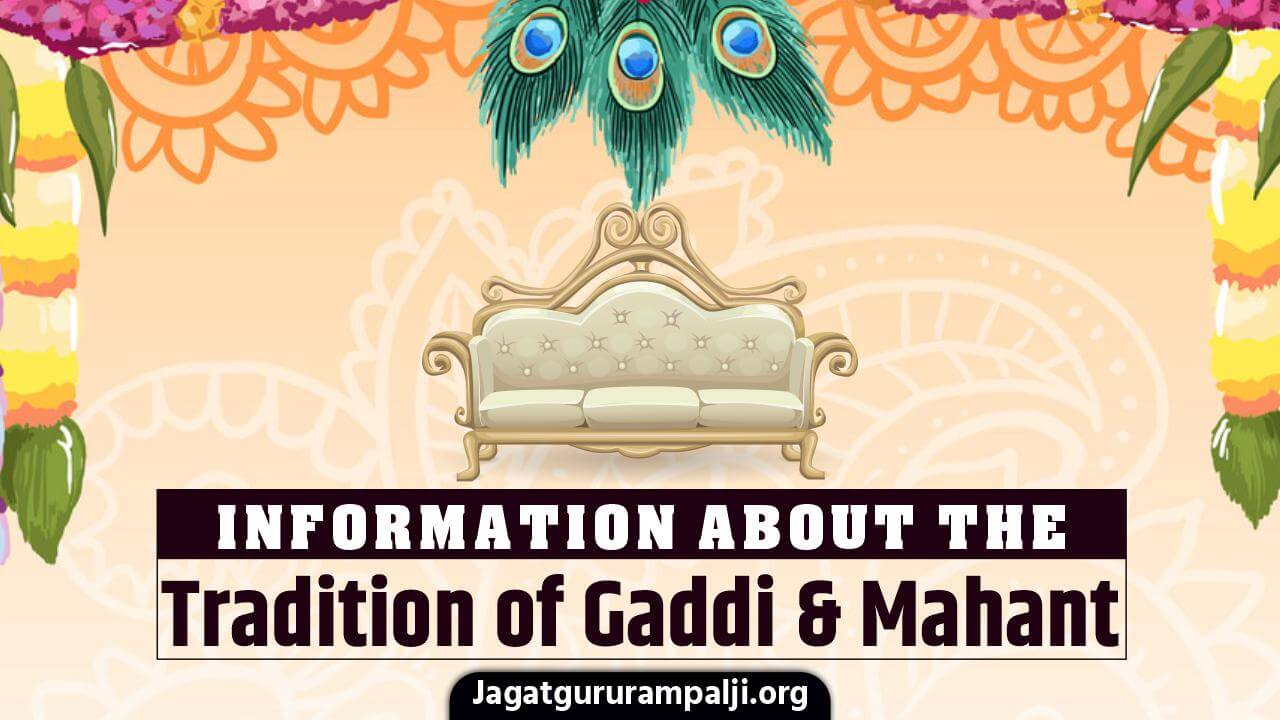 Information about the tradition of mahant and native seat (gaddi): - In some solitary place or city or in some village, some great soul saint or worshipper used to live. After his death, to keep his memory, a memorial of stones or bricks is built on the place where the last rites of his body were performed. Then the followers or the descendents of that holy soul install a statue of him. After some time, devotees go there. Some start donating money and give it a form of a temple and the descendents of that saint or sage become greedy of acquiring money. They start misleading that, one who visits this place attains complete salvation. One gets all the benefits which the disciples used to get during the lifetime of this greatman. Consider this statue to be that Saint ji only. He who will not come here, his salvation is not possible etc-etc.

Someone should ask those ignorants that for example, there was some doctor. He used to give medicine by palpating the pulse, and the patient used to become alright. After the death of that doctor, making a statue of his and installing it, if some greedy person says that this statue does the job of that every doctor; he who will come to visit it will become fully cured, or if someone sits himself becoming a fake doctor, that I also give medicine. But gives all the treatment opposite to the book of medicine, then he is deceiving, because his aim is to only earn money. The statue of any saint or God is a respectable memorial, but is not worshippable.

Similarly, if making a statue of some saint or God, under its pretext, some priest or mahant says that I also give naam. If that gentleman is giving all the sadhna opposite to that every holy scripture which that great saint has written from his experiences, then that fake saint or mahant is himself a culprit and is also taking the burden of wasting the life of the followers on his head. At one time, there is only one saint. Crores of fake saints, mahants and aacharyas become an obstacle in his path.

After the death of a Saint, the tradition of saint or mahant begins. For the protection of the place of the former Saint, a manager is selected, who is called Mahant. He is only appointed to look after that holy monument. Then, out of greed, he himself becomes a guru and the bhakti-desiring loving souls, becoming based on him, waste their lives.

A rule has been made in the mahant-tradition that the first son of the former mahant will be entitled to the post of mahant; whether he is a drunkard or an unknowledgeable person. This is a path of bhakti; in this only a Purna Sant (Complete Saint) can salvage a living being. Das read two-three books of mahant-tradition. Saw in them that -

1. A two years old child was seated on a native seat (gaddi). Then, on growing up, he started giving naam-daan. In the second book, I read that a five-year-old child's father, who was a mahant, suddenly died. Later, the 'sangat' (congregation) and his mother appointed that five-year-old child on the post of mahant. A few years later, he became guru Ji.

2. I read in the history of one mahant-tradition that the mahant did not have any child. He died. His brother had already died. He had no child. To look after the native seat (gaddi), servant was temporarily appointed as the mahant until the birth of a child in that family. After some time, someone had a son in the mahant family; the temporary mahant ran away with the native seat (gaddi). In some other city, he himself installed the native seat and became mahant; opened a new shop there and in the previous place, a two and a half years old child was made mahant.

3. I saw the history of one mahant-tradition that the eldest son left home. They appointed the younger one on the post of mahant. After some time, a temple was built there, and more offerings (money from religious offerings) started coming. The offspring of the elder son said that we have the right over this temple, because of this a dispute started. The mahant seated on the native seat was killed. Then his eldest son was appointed the mahant i.e. the holder of the native seat. Even he was killed. Then his second brother was made to sit on the gaddi; others who used to call themselves eligible, they set up a new place and opened a new shop. By filing cases against each other, in greed turned a happy life into hell. How did it remain a Dhaam (Sacred Place / Place of pilgrimage) ? Rather it became a battlefield of Mahabharat of Kurukshetra. Some mahants have taken an agency to make saints. They make one wear saffron-coloured clothes. Changing the previous name, keep some other name. Then that artificial mahant, becoming a fake saint plays with the lives of innocent souls. He is himself wasting his precious human life as well as is ruining the lives of the innocent souls and is incurring heinous sin.

When a snake had to sting King Parikshit ji, at that time a need for a Complete Guru arose because the welfare of a living being is impossible without a Complete Saint. At that time all the sages of the earth refused to give initiation to King Parikshit and to recite the tale (Katha) of Shrimad bhagwat Sudhasagar (name of a holy book) for seven days. Because their hollowness had to be revealed on the seventh day. Because of this very reason no one came forward. Even the writer of Srimad bhagwat Sudhasagar Shri Vedvyas Ji himself expressed his incompetency. Because those sages used to fear God. For this reason also, he did not consider it right to play with King Parikshit's life.

Maharishi Sukhdev Ji was called from heaven for the welfare of King Parikshit Ji. He gave initiation to the king, and by reciting the tale for seven days, whatever welfare Rishi Sukhdev Ji could do of the King Parikshit Ji, he did. The current gurus, saints, mahants and aacharyas are themselves unfamiliar with the constitution of God. Therefore becoming the subject of a terrible offence are being culprits.

In the present time there is a flood of those who do katha or paath of sacred texts, and who give initiation. Because the holy souls of all the holy religions are unacquainted with the Tatvgyan (true spiritual knowledge), fake gurus, saints, and mahants are taking an advantage. When the holy devotee society will become acquainted with the spiritual Tatvgyan, then these fake saints, gurus and aacharyas will not find a place to hide; they will have to flee to save themselves.