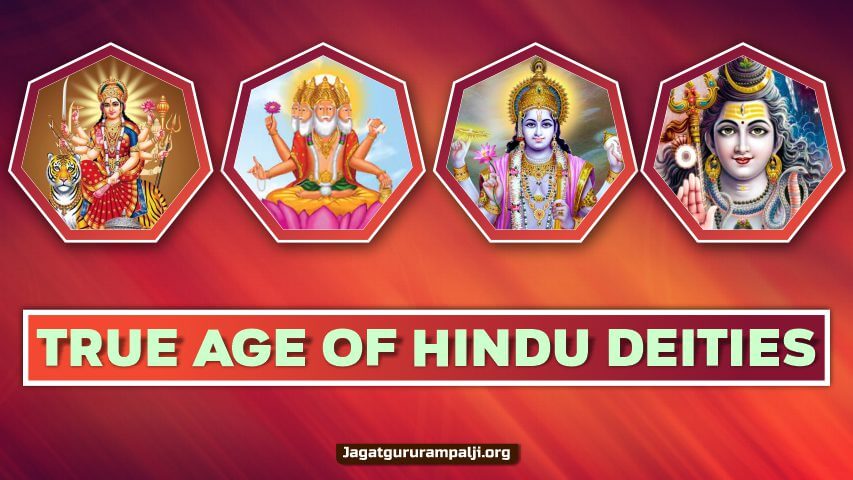 Come let us reveal the hidden spiritual facts from the holy scriptures about the age of Gods in the Hindu Trimurti / Trinity / Triumvirate ie. Brahma, Vishnu, Shiva whom; to date; the entire devotee community and the contemporary sages, saints, and Mandleshwars, etc., believe to be eternal. Great Saint Rampal Ji Maharaj has explained the age of all gods which has been mentioned in holy scriptures but was never told by earlier religious preachers. Along with the age of triple gods, we will also tell the age of their father and grandfather.

The earth where we are living is perishable. This is the region of Devil also known as Brahm - Kaal. Nothing in this region is everlasting. Holy scriptures like Rigved Mandal no.10 Sukt 90 Mantra 2 & 3; Atharvaveda Kand no. 4 Anuvak no.1 Mantra no.1, 3, and 4 and Shrimad Bhagawad Gita provide evidence that in the path of devotion there are three unmanifested / invisible Gods.

Let us begin to explain the first unmanifested God ie. Brahm - Kaal and what is his set-up in the universe?.

In Gita chapter 7 verse 24-25 - The giver of the knowledge of Gita ie. Brahm-Kaal tells himself that ‘these foolish people consider the unmanifested/ invisible me (Kaal) to have incarnated in human form as Krishan. I remain hidden by my mystic powers therefore, do not appear before everyone ie. remain invisible. This ignorant world does not know my eternal character of not appearing to anyone by any religious practice.

Brahm-Kaal is a devil who is the owner of only twenty-one universes which are mortal. He is a deceiver who is punished due to his misconduct. He is being cursed by Almighty KavirDev to eat grime of one-lacs subtle human bodies every day and produce 1.25 lacs every day, therefore, he remains unmanifested/invisible. He is the husband of Goddess Durga, and the father of Brahma, Vishnu, Shiva (Mahesh/Rudra). Brahm-Kaal, Goddess Durga and his 21 universes are not eternal but their age is very long. For details please read How Souls were Caught in Kaal's Trap

Before explaining the age of Brahm-Kaal let us brief the readers about his three sons and what is their age?

Evidence from pious Shrimad Devi Bhagwat and pious Shiv Mahapuran state that Gods of Hindu triumvirate are in the cycle of birth and death. They are not immortal. The same evidence is also provided in the pious Shrimad Bhagavad Gita.

What is the Age of Rajogun Brahma?

Brahma Ji is the eldest son of Goddess Durga and Shaitan Brahm-Kaal who is responsible only for the Rajogun department in the twenty-one universes of Jyoti Niranjan. Goddess Saraswati (Durga’s form representing Goddess of Knowledge) is the consort of Brahma Ji. Brahma Ji in his idols and pictures is portrayed as an old man who has four heads facing in four directions. He is never portrayed as holding any weapon rather he is represented holding symbols of wisdom, knowledge, and creation. Brahma Ji takes birth and dies. He is not eternal. For details please read All About of Lord Brahma.

One day of Brahma = 1000 (one thousand) Chaturyuga (four yugas) and the same is the duration of the night.

One month =30 days and nights

One Chaukri (Chaturyuga) is made up of four Yugas which are as follows.

What is the Age of Satogun Vishnu?

Vishnu Ji is the younger brother of Brahma Ji, the second child of Goddess Durga and Shaitan Brahm-Kaal who has been given the responsibility of the Satogun department in the twenty-one universes of his father Jyoti Niranjan (Kaal). Vishnu is the preserver, who protects beings at the time when they are threatened by evils. The blue-skin Vishnu is portrayed in pictures and idols as reclining on Sheshnag, while he drifts in the primordial ocean dressed in finest jewels and clothes accompanied by his consort Goddess Laxmi (Durga’s form representing Goddess of wealth) and Garuda (his animal companion) bearing conch shell, a lotus flower, a war discuss called ‘Sudarshan Chakra’ and a mace in his four arms. For details please read Brief Summary of Shri Vishnu Puran.

Age of Vishnu is seven times that of Brahma.

What is the Age of Tamogun Shiva

Shiva is the youngest brother of Brahma Ji. He is the junior-most in Hindu triumvirate and is the third child of Goddess Durga and Shaitan Brahm-Kaal who has been given the responsibility of the Tamogun department in the twenty-one universes of his father Jyoti Niranjan (Kaal). He is portrayed as a hermit being dressed in animal skins with dreadlocked hair. He destroys as his role is to prepare food for his father, Brahm-Kaal. For details please read Shiv Puran.

Age of Shiv is seven times that of Vishnu

Note: The present Brahma who is seated on the position of the head of the Rajogun department has attained the age of 50 years. He is running in his 51st year. Brahm-Kaal and Durga residing in the form of MahaBrahma and MahaSavitri in their secret region ‘Brahamlok’ act as husband-wife, they create and keep one pious and eligible soul in a coma there till present Brahma completes his tenure. Then they make that soul-conscious and provide the responsibility of the Rajogun department. The current Brahma dies and goes in 84 lakh life forms in different species. He enjoys pleasures in heaven also bears the pain in hell and takes birth as a human.

The same happens with Vishnu and Shiva; after completing their tenure the next eligible soul is given the responsibility of the respective department. In the form of MahaVishnu and MahaLakshmi, they create the next Vishnu and in the form of MahaShiv and MahaParvati, they give birth to the next Shiva. Then these three further do creation, preservation, and destruction in 21 universes. This vicious cycle continues in the region of Shaitan-Kaal.

Having understood the age of Brahma, Vishnu, Shiva now we will calculate the age of their father, the first unmanifested God ie. Brahm-Kaal.

What is the Age of Brahm (Kaal / Jyoti Niranjan / Kshar Purush)

In Gita chapter 4 verse 5 & 9 Brahm-Kaal tells Arjun that ‘You and I have had several births, you do not know, I know’.

This proves that the owner of 21 universes who has one-thousand arms (Rigveda Mandal no. 10 Sukt 90 Mantra no.1) is so powerful yet he is in the cycle of birth and death.

ParBrahm – Akshar Purush is the owner of only 7 Shankh (700 quadrillion) universes. He has Ten-Thousand arms (Evidence Shree Vishnu Puran part 1 Adhyay 9 Shlok 53 on page 32). Although he is stronger and his life is longer than Brahm-Kaal still he is in the cycle of birth and death. His 7 Shankh universe along with all creatures residing there are mortal.

Note - In the translation of Gita chapter 8 verse 17 other translators have mentioned one day of Brahma of one thousand ‘Chaturyuga’ which is not correct because in the original text ‘Sahasra-yuga’ is written not ‘Chaturyuga’. It has been written ‘brahmaṇH’ not ‘Brahma’. In this Shloka 17; it has been mentioned about ParBrahm (Akshar Purush) and not about Brahma. Due to the lack of true spiritual knowledge, these ignorants have distorted the correct meaning.

In Gita chapter 8 verse 18-19 – there is a description of ParBrahm. It has been mentioned that ‘the entire world advent during the day is produced from Akshar Purush who is unmanifested/invisible and at the fall of the night all embodied beings disappear again into this unmanifested’.

What is the Age of ParBrahm / Akshar Purush

The bottom line is that despite having such huge ages, they all are still in birth and death.

In Gita chapter 15 verses 16-17 and chapter 8 verse 20-22; the knowledge giver of Gita tells about another PurnaBrahm (complete God) apart from himself who in reality is immortal.

What is the Age of Param Akshar Brahm / Satpurush?

In Gita chapter 8 verse 20 it is said that apart from the unmanifested ParBrahm mentioned in chapter 8 verse 18-19 there is yet another Sanatan unmanifested/invisible Satpurush called PuranBrahm, the complete God. That ultimate divine is eternal even when all living entities cease. That unmanifested/invisible Puran Brahm is never destroyed even after the destruction of all beings. He resides in the ultimate abode Sanatan Param Dham ie. ‘Satlok’. He is in human form and his body is highly effulgent. The brightness of one hair follicle of his body is more than the brightness of millions of Sun. He is the creator of the universe. He is only worthy to be worshipped.

Conclusion: This human body made up of five elements will destroy one day. This is definite. There is no trace of peace and happiness in this perishable world of Satan/Brahm-Kaal. Therefore, this is the advice to all; if you also want to attain the eternal peace and the same highly radiant body made up of just one element ‘Nooritatva’ which is non-perishable and want to get rid of the long illness of birth and rebirth and want a permanent residence in ‘Shashwat Param Dham’ ie ‘Satlok’ then take refuge of great Saint Rampal Ji Maharaj. Take initiation, do true worship of supreme God, KavirDev, and become eligible for the attainment of salvation.