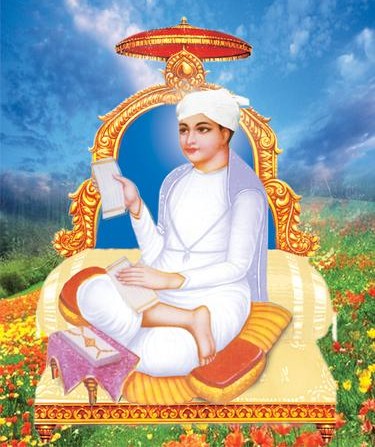 Respected Garibdas Ji along with his other fellow milkmen was tending his grazing cattle in his Nalaa field which is sticking to the boundary of Village Kablana. God Kabir departed from Satlok (Sachkhand, Eternal Place) and appeared in the Nalaa field in the form of a Jinda Mahatma (a type of Saint). The milkmen requested God Kabir who had appeared in the form of a Jinda Mahatma to have food. God Kabir declined the offer. On that the milkmen said that if you are not going to have food, then have milk because God Kabir had said that I have come after having food from my Satlok village. At that moment, God Kabir Ji said that I drink milk of an unmarried cow only. Child Garibdas Ji brought an unmarried cow to God Kabir Ji and said that Babaji, how can this unmarried cow give milk? Then Kavir Dev (Kabir God) patted on the back of that unmarried calf and automatically milk started flowing from the udders of the unmarried calf and stopped when the pot became full. God Kabir Ji drank that milk and made his child Garibdas Ji drink some as prasaad (blessed drink). 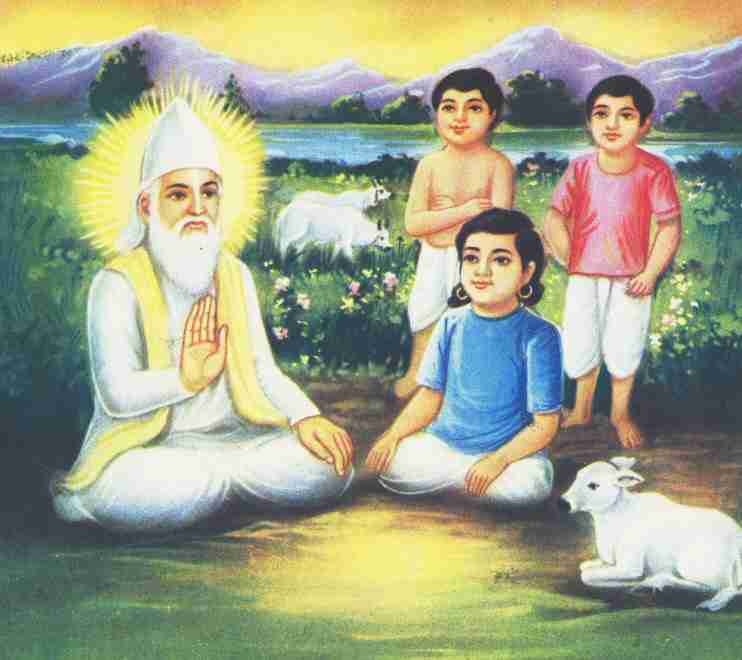 After showing His two forms in Satlok and then sitting on the throne in Jinda form as the Master of all, God Kabir said that I myself have lived in Kaashi (Varanasi / Banaras) for 120 years as a weaver (dhaanak). I had also met Prophet Muhammad earlier. In Quran Sharif, the words Kabira, Kabiran, Khabira, Khabiran, Allahu Akbar etc point towards me only. I only met Shri Nanak Ji in form of a Jinda Mahatma on the bank of river Bein {Jinda Mahatmas are in Muslims, who wear a black knee-length cloak (like an overcoat) and wear a conical hat on head}, and I only had met Shri Sultan Abrahim Bin Adham Ji and Shri Dadu Ji and in all the four Vedas, the names Kavir Agni, KavirDev (KaviranghariH) etc are indicating towards me alone.

God Kabir said that I only was sitting in Satlok much before the Vedas.

Creation of Satgranth by Garibdas ji

(In Village Chhudani, District Jhajjar, Haryana, even today a memorial is present in that jungle where Sant Garibdas Ji had seen and met Purna Parmatma in a human body.) After the departure of the soul of Respected Garibdas Ji with God Kabir Bandichhor, the villagers considering him dead, placed him on a pyre and started preparing to cremate him. At that very moment, God Kabir entered (introduced) the soul of Respected Garibdas Ji in his body. Ten years old boy Garibdas became alive. Thereafter, he created a book named ‘Satgranth’ of his sacred speech on the eye-witnessed account of that Purna Parmatma (Complete God Kabir Sahib).

Parmeshwar Kabir only came in Jinda form from Satlok and took me to the Ajab Nagar (Strange/remarkable city Satlok). Where there is only happiness, there are no worries; there is no grief of the sufferings in the bodies of other living beings.

This very SatPurush, who had come in Kaashi city as a weaver, by appearing at different-different times had conveyed across Respected Shri Abrahim Sultan Adham Ji and Respected Dadu Ji and also Respected Nanak Ji by giving them Satnaam. That same KavirDev (God Kabir) whose one hair follicle has brightness similar to that of crores of suns and is visible like a man, by putting another body of faded masses of lights over His actual bright body meets us in this mortal world because the naked eyes can not bear the light of the actual form of that God.

Respected Garibdas Ji has said in his sacred speech

The meaning is that the area where Supreme God Kabir Hari (KavirDev) came, its name is ‘Haryana’ i.e. ‘a holy place where Parmatma (God) came’. Because of which started calling the nearby regions as Hariaana (Haryana). In 1966 A.D. on the division of the Punjab state, this region got the name Hariaana (Haryana). The speech spoken around 236 years ago proved right in 1966 that when the time will arrive, this region will become popular as the Haryana state, which is clearly evident today.