God Kabir's Evidence in Rag (Raag) Tilang of the SGGS 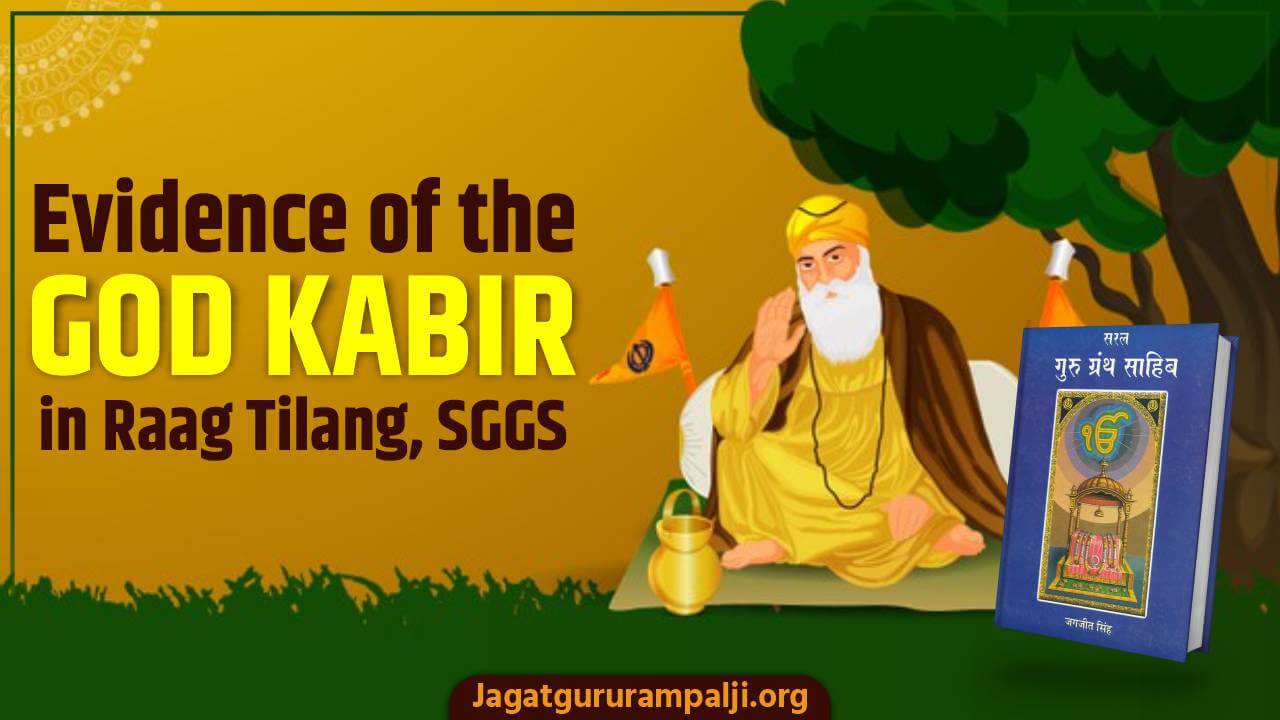 Pious soul respected Shri Nanak Dev Ji was born in the year 1469 in Talwandi village of district Lahore in West Pakistan. A learned man; in languages like Persian (Farsi), Punjabi, and Sanskrit Nanak Ji used to read pious Shrimad Bhagavad Gita from Shri Brijlal Pandey Ji and daily used to recite the path of Gita Ji. He used to chant the ‘OM’ mantra with great reverence considering it to be superior.

Baba Nanak Dev Ji used to bathe in the nearby flowing river Bein near Sultanpur every morning and used to sit for hours in contemplation of God. One day while the God-loving soul Nanak Ji was sitting in deep meditation on the bank of river Bein remembering God; acquiring the form of ‘Jinda Baba’ God Kabir Saheb (glorified in Raag Tilang in SGGS) came and met Shri Nanak Ji. Almighty Kabir told Nanak Ji that you seem to be a God-loving soul. Kindly show me also the path of devotion. I have wandered much but my skepticism has not ended. Upon inquiring by Nanak Dev Ji if ‘Jinda Baba’ has acquired any guru, Kabir Saheb told He is a weaver from Kashi, Varanasi, and Swami Ramanand Ji is his spiritual guru but he also could not resolve his doubts.

Noticing ‘Jinda Baba’ is inquisitive; Nanak Ji started preaching Kabir Saheb not knowing that God is standing in front of him. Nanak Ji said pious Gita Ji mentions to chant ‘OM’ mantra, to attain heaven this is a modest way. Emancipation is impossible without acquiring a guru. Since Nanak Ji was confident of his spiritual knowledge he said, ‘make me your guru, your welfare is certain’. ‘Jinda Baba’ said ‘I will make you my guru but I have certain queries and want you to resolve’. Nanak Ji agreed.

Giving reference of Gita Ji chapter 2 verse 12, chapter 4 verse 5; Jinda Baba proved to Nanak Ji that the speaker of Gita’s knowledge is in form and is in the cycle of birth and death as he himself admits to warrior Arjun. Kabir Saheb told that Brahm-Kaal along with his 21 universes is mortal and seekers chanting the ‘OM’ mantra remain in recurrence. They do not attain Salvation. Nanak Ji although used to recite the path from pious Gita Ji daily got surprised to hear this true spiritual knowledge from Jinda Baba. He was completely ignorant about these spiritual facts. He could not resolve doubts of Jinda Baba rather himself started enhancing his spiritual knowledge.

The dialogue between Kabir Saheb (praised in Raag Tilang in SGGS) and Nanak Ji on the bank of river Bein regarding Who is God? and how can He be attained? Intensified the curiosity of Nanak Ji to have a divine vision. Earlier, Nanak Ji used to consider God is formless. Moving ahead Jinda Baba told ‘There is another supreme power other than the giver of the knowledge of pious Gita Ji who is his venerable God. He himself tells in Gita chapter 15 verse 4, chapter 18 verse 62 to Arjun, ‘to go in the refuge of that God with whose grace the eternal peace and ultimate abode can be attained’. That supreme power is Akal Purush/Satpurush who resides in Sachkhand/Satlok the eternal world. Only an enlightened saint tells the true path to attain that ‘Shashwat Sthanam’.

Jinda Baba told Nanak Ji the complete creation of the universe then Nanak Ji accepted that no one has told him this true spiritual knowledge. Initially, Nanak Ji did not agree but with the shreds of evidence told by Jinda Baba from pious Shrimad Bhagawad Durga Puran, Shri Shiv Puran, Gita Ji, and other holy scriptures Nanak Ji developed trust in the words of Kabir Saheb and got curious to see that immortal amazing world and to have a divine vision of Akal Purush/Satpurush. Then Kabir Saheb took the pious soul Nanak Ji to Sachkhand/Satlok and made him familiar with all creation beyond the twenty-one universes of Brahm-Kaal, beyond great heaven where there is life.

Upon reaching the immortal world Satlok, Nanak Ji saw Akal Purush/Shabad Swaroopi Ram (glorified in Raag Tilang in SGGS) enthroned like an emperor in a big beautiful throne in Sachkhand whose body was highly effulgent, one hair follicle of His body has the brightness of more than millions of Sun and Moon. Initially, Nanak Ji thought that this Jinda Baba who has brought him to Sachhkhand is the servant of Param Akshar Purush but to his surprise, he noticed that the same Jinda Baba got immersed into highly radiant Akal Purush enthroned like an emperor. Then the myth of Nanak Ji was dispelled that God is formless. Now, he understood the fact that God is in human form.

Jinda Baba told Nanak Dev Ji that this immortal world and God Kabir Saheb is attainable by true worship, a true spiritual leader provides true salvation mantras as mentioned in Srimad Bhagavad Gita chapter 17 verse 23 (coded mantras Om-Tat-Sat) chanting which the soul gets a permanent place in Sachkhand and gets relieved from the cycle of birth and death forever. Then, God Kabir Saheb released the soul of Nanak Ji back after three days into the body. After that, respected Shri Nanak Dev Ji eulogized the eye-witness glory of Param Akshar Purush / Akal Purush / God Kabir Saheb which has been scripted in holy Sri Guru Granth Sahib.

Translation: - (Kun Kartar) O Shabd Swaroopi! the doer means the creator of the universe by word power (gosh) came in the form of a Nirguni Saint (Kareem) merciful (Hakka Kabir) Satya Kabir (tu) you (Beaeb Parvadagaar) are the flawless (eternal) God. (Pesh to dar) in front of you ie. at your door (tahkeek) fully knowledgeable (yak arj guftam) it is a special prayer from a heart that (dildaani) O Mehboob! (Duniyaan mukaame), this world-like residence (faani) is perishable. (Mm sar mui) after the creature abandons the body (Ajraail), an angel named Ajraail –Yamdoot (giraft dil hech na daani) ruthlessly captures and takes this being along with. At that time (Kas) no (dastM geer) companion (Jan) person like (Pisar) son (Padar) father (biraadraan) relatives (Nestan) does not accompany. (Aakhir beyaftam). In the end, all measures (takbeer), duty means (kas), no rituals/action works (na daarad choon savad), and the voice also stops. (Shab roj) Everyday (gashtam) Like ‘gasat’ does not stops (dar hawa) like the non-stop blowing wind (Badi khayaal) evil thoughts (Kardem) keep patrolling (neki kaar kardam) doing meritorious acts (mm een chini) I have not found any (Ahwaal) Jariya i.e. Means (Gaahe na) not found (Badbakht). In such a bad time (Hum Chu) like us (Bakheel) innocent (Gaafil) reckless (Benazar Bebaak) because of not having the real knowledge of devotion and God were blind and dumb and used to tell wrong knowledge - Uva-Bai. (Nanak Bugoyad) Nanak Ji is saying that, O God Kabir, by your grace (tere chaakra paakhaak), drowning in the dust of the feet of your servants (Janu Tura) the being transcended. 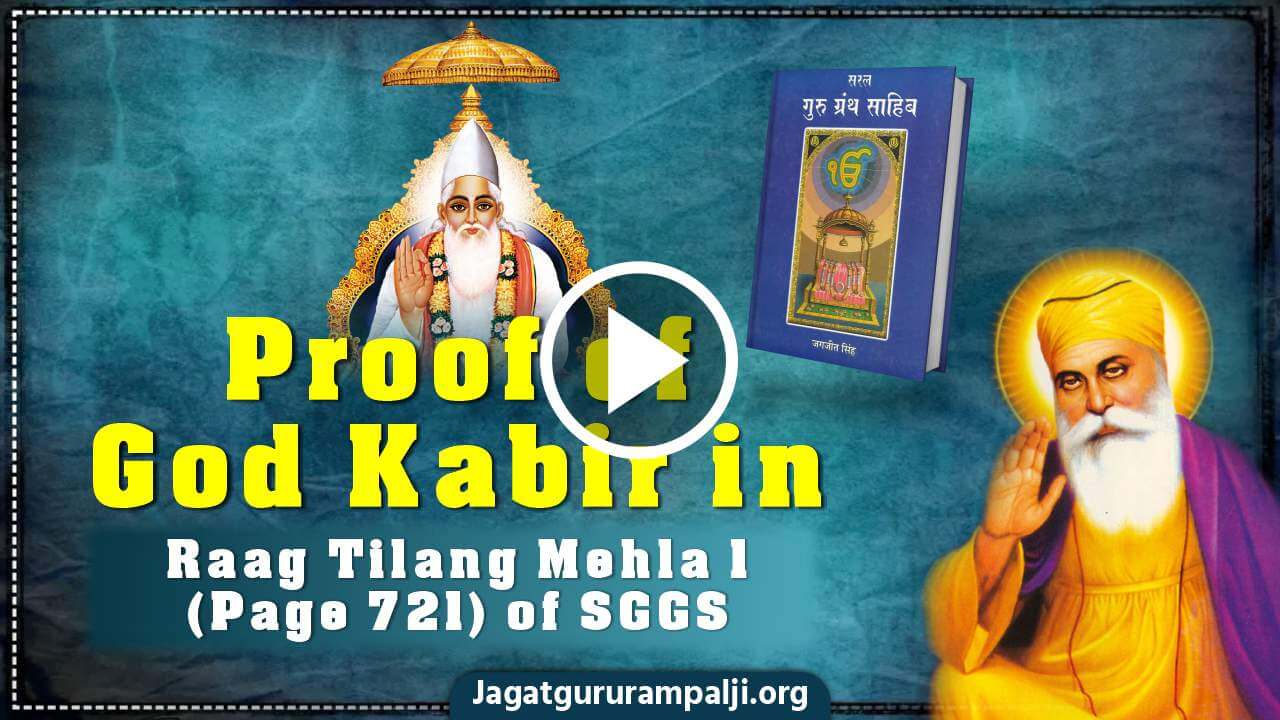 Translation: Oh Creator, the Master, the unqualified Saint, kind “Sat Kabir” (Eternal Kabir), You are flawless God. There is a request before you from the heart that of Beloved, this residence of world is destructible. I have realised this completely. Oh benefactor, on death of this living being, a messenger of Yam named Ajrail, capturing mercilessly takes this being away. No companion like, son, father, relative gives company. In the end, all the schemes, obligations, and rituals/actions are useless. Everyday, evil thoughts keep patrolling like non-stop blowing wind. I did not get any means of doing meritorious acts. In such a bad time, i.e. Kalyug, the ignorant and careless like us, because of not having knowledge of the true path, were blind and dumb.

Says Nanak, I am your humble servant, the dust of the feet of your servants.

The Gist - Shri Guru Nanak Sahib Ji is saying, O Hakka Kabir (Sat Kabir)! You are the flawless and merciful God. I have a request from you that I am devoid of the true spiritual truth and is unanswerable in front of your real knowledge ie. I have become speechless. ‘O Lord of the Lineage! I am the dust of the feet of your servants, keep me in the refuge.

Almighty Kabir has descended yet again present in the cover of Saint Rampal Ji Maharaj for the welfare of mankind. He is the Savior. He is the same ‘Hakka Kabir’ with whose grace respected Shri Nanak Dev Ji attained salvation. This is a request to all devotees, identify God, and make your human life successful by taking refuge of the Tatvadarshi Sant Rampal Ji Maharaj. Chant the same true salvation mantras which Shri Nanak Dev Ji chanted and become the permanent resident of the immortal Sachkhand/Satlok.