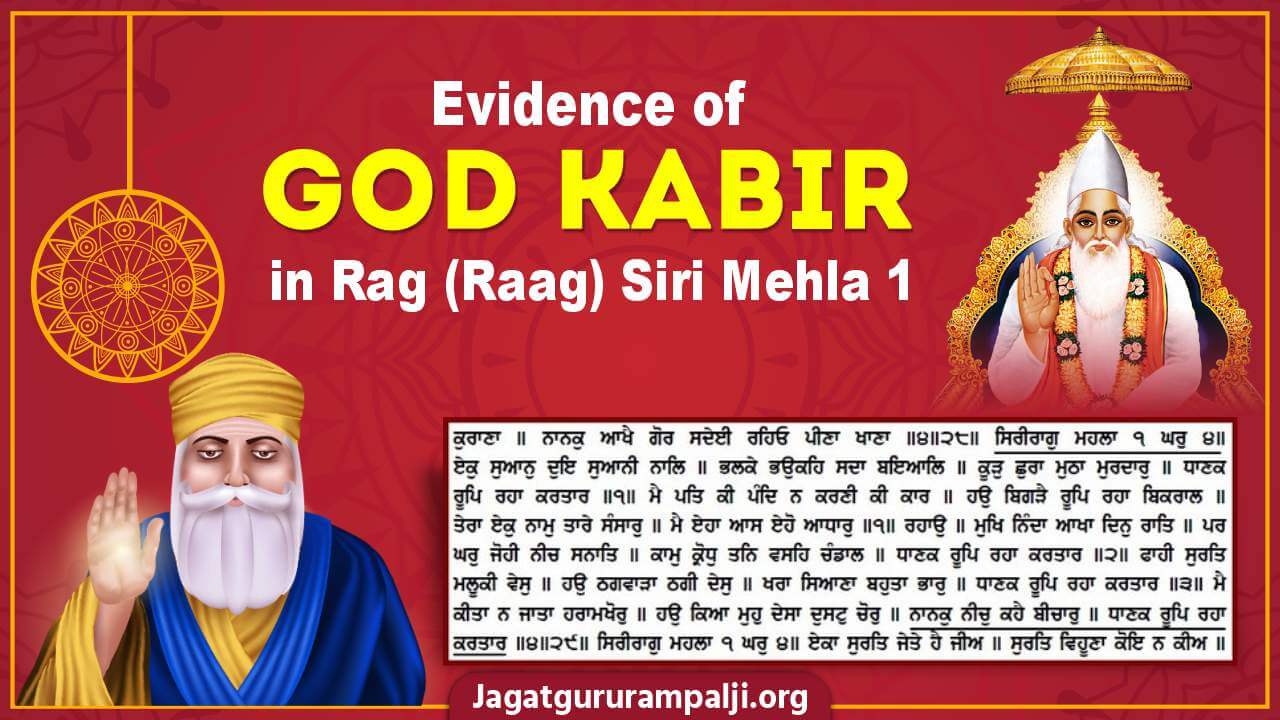 All souls of the eternal world ‘Satlok’ presently residing in the region of Brahm-Kaal were leading a happy and comfortable life but got highly fascinated by Satan Kaal ie. Jyoti Niranjan because of the severe penance he did in Satlok for the attainment of a separate region where he can rule and be the King. We all souls seeing his tantrums got highly impressed and got separated from our happiness-giving God (whose glory is sung in Raag Siri Mehla 1, in SGGS) who has created the entire universe and we all souls with His word power and has provided all luxuries and comforts. Thus, all souls failed in our loyalty towards our Master / Father and due to our fault came along with butcher Jyoti Niranjan-Kaal intending to lead a prosperous life in his twenty-one universes. But since the day we all souls have been separated from the happiness-giving God Kabir Saheb, we are being tortured by Brahm-Kaal. Soon we all souls realized that there is no trace of happiness in the twenty-one universes of Jyoti Niranjan Kaal. The great harassment to souls is bearing pain in 84 lakh life forms and the vicious cycle of birth and rebirth.

Merciful Almighty Kabir (glorified in Raag Siri Mehla 1 in SGGS), intending to liberate misled and ignorant souls from the web of Brahm-Kaal descends in every age and meets His virtuous souls. Guru Nanak Dev Ji was one such pious soul who was in the refuge of Almighty Kabir in some of his earlier human births. The same soul of Nanak Ji was King Ambresh in Satyug and in Treta Yuga, he was King Janak, the father of Sita Ji. In Kalyug, he was famous by the name ‘Nanak’.

Most venerable God Kabir, to impart true spiritual knowledge to His pious soul Nanak Dev Ji acquiring the form of a ‘Jinda Baba’ went to Punjab one day while Nanak Ji went to take bath in river Bein according to his routine and was meditating remembering God whom he believed is formless. Shri Nanak Dev Ji used to do Jaap of one Onkaar (OM) mantra and only considering it to be true used to say ‘‘Ek-onkar Nirankar’ (एक-ओकार निरंकार).

God Kabir and Nanak Ji had a dialogue on the bank of river Bein that day in which Kabir Saheb explained to Nanak Ji that if such a God-loving pious soul like you is bearing the pain of birth and death then what will happen to a common man?. The way of your worship is arbitrary and cannot provide you liberation. The God whom you adore considering to be supreme power is incapable of providing you emancipation. The God who can provide you salvation is some other power who is in human form and resides in the ultimate abode called ‘Sachkhand / Satlok’. By taking refuge of a Tatvadarshi Saint (true spiritual leader) and by chanting the true salvation mantra only you can attain that immortal world ‘Sachkhand’.

Initially, Nanak Ji did not believe the words of ‘Jinda Baba’, Kabir Saheb since he could not identify the supreme power (praised in Raag Siri Mehla 1 in SGGS) but when Kabir Saheb provided facts from holy scripture pious Shrimad Bhagavad Gita then Nanak Ji had no answer because Nanak Ji daily used to recite Path from Gita Ji but was unaware of the spiritual facts that were revealed by Kabir Saheb. God Kabir told Nanak Ji that ‘OM’ is the mantra of Brahm-Kaal who is cursed to eat grime of one-lakh human bodies every day and produce 1.25 lakh every day. In Gita Chapter 18 Verse 62 this Kaal himself tells warrior Arjun that ‘by all means, you go in the refuge of only that Supreme God by whose grace you will attain supreme peace and eternal supreme state’. He is only worthy to be worshipped and no one else. Jinda Baba told Nanak Ji that seekers chanting the ‘OM’ mantra remain in recurrence. To attain God / Param Akshar Purush / Akal Purush / Satpurush you need to chant the true salvation mantra provided by an enlightened saint.

Listening to the true spiritual knowledge Nanak Ji got highly motivated by the sacred speech of ‘Jinda Baba’ and requested him to show him that amazing immortal world. He wanted to have a vision of Akaal Purush / Shabad Swaroopi Ram. Then, God Kabir Saheb took the pious soul Nanak Ji to Satlok (Sachkhand) which is beyond the great heaven and showed him His SatPurush / Akal Purush form. Shri Nanak Ji saw a big beautiful throne in Satlok which was bedazzled with precious stones having a dome above it in which highly effulgent Akaal Purush was enthroned like an emperor and a flabellum was swaying over Almighty Kabir Saheb’s head on its own. Initially, Nanak Ji thought that this ‘Jinda Baba’ must be the servant of Akaal Purush but soon God Kabir in ‘Jinda Baba’ form got immersed into the highly effulgent Akaal Purush. Then Nanak Ji understood the fact that God is not formless (Nirakar) but is in human form.

Seeing the amazing immortal world Sachhkhand Nanak Ji did not feel like coming back to the mortal world of Brahm-Kaal therefore, requested Kabir Saheb to allow him to stay in Sachkhand forever. Kabir Saheb told Nanak Ji that Satlok can only be attained by doing true worship of Kabir Saheb after taking initiation from an enlightened (Tatvadarshi) saint (evidence Srimad Bhagavad Gita chapter 17 verse 23). Once the soul gains spiritual powers by doing true worship and chanting true salvation mantras then only he can be liberated. Kabir Saheb told Nanak Ji that ‘you will have to go back on earth to complete your worship. Glorify God as you have witnessed to your other brothers and sisters trapped in that deceased world of butcher Brahm-Kaal. Once you will gain spiritual powers and will become eligible I will liberate you’.

Nanak Ji remained with Almighty Kabir in Sachkhand for three days then God Kabir released the soul back into the body. After that Shri Nanak Ji eulogized the eye-witnessed glory of God Kabir, which is present in his sacred speech in Sri Guru Granth Sahib in Mehla Pehla. Only after God Kabir gave Shri Nanak Ji Jaap of Satnaam, Shri Nanak Ji got liberated from Kaal’s region.

Addressing Kabir Saheb as ‘Kartar’ whom he saw both in Sachkhand (as Satpurush) and in Kaashi, Varanasi in the form of a weaver Nanak Ji sang ‘Dhaanak roop raha Kartar’

Explanation: It has been clearly written in this that one dog (in the form of mind) and along with these two bitches (in the form of expectations and desires) are always unnecessarily barking (i.e. desires keep on arising) and new-new expectations keep arising all the time. The method (without Satnam) of killing them was a false (kud) means (muth murdaar). God (Kabir Sahib) met me in the form of a weaver (dhaanak). He told me the correct way of worship.

Shri Nanak Sahib Ji says that without the sadhana of that God (Dhaanak / weaver Kabir Sahib) neither there would have been any reputation (pati) nor there was any good deed (good earning) being done. Consequently, the terrible form of Kaal which I have perceived now, Kabir Sahib, from that only your one (Satnaam) Naam can convey the whole world across (can extricate from Kaal’s lok). Even I (Nanak Ji says) am only hopeful of your this Naam, and only this Naam is my base. Earlier I must have also criticized you a lot out of ignorance because lust and anger, these devils live in this body.

The God in the form of a (dhaanak) weaver (Kabir Sahib who used to work as a weaver) came and showed me the true path and released me from Kaal. His (surat) appearance is very pleasing and charming and is in beautiful attire (in form of Jinda). He met me; nobody can recognize Him, who even befooled Kaal i.e. He appears to be a dhaanak (weaver) and then becomes Jinda. Even Kaal God became confused that this is someone of low caste; he can not be God (Purna Brahm). In this way, Kabir Sahib, hiding his real form, comes as a servant. Kaal or any ordinary person cannot recognize Him.

Therefore, Shri Nanak Sahib Ji has called him a thug (imposter) and along with this has said that Dhanak (weaver Kabir Sahib) is very intelligent. Appears to be something else, but is very magnificent (bahuta bhaar), the God Purna Brahm who has Himself come in the form of a weaver, a dhanak. To instruct every human being on submissiveness, accepting his mistake says that I (Nanak Ji) argued with Purna Brahm and He (Kabir Sahib) also presented Himself (acting) as a servant and addressed me (Nanak Ji) as Master.

Therefore, highlighting His greatness and repenting of his ignorance, Shri Nanak Ji says that I (Nanak Ji) was not even worthy of doing and getting anything done. Even then, considering my sadhana to be superior, confronted (debated on knowledge) God. Who can be as low, wicked, and good-for-nothing like me, who could not recognize his Lord-Master Purna Parmatma in a dhaanak form (Supreme God Kabir Sahib who came as a weaver)?

Shri Nanak Sahib Ji states that I am saying all this with full consideration that the Supreme God is in the form of a dhanak (Weaver Kabir).

The Gist: Shri Nanak Sahib Ji is saying that this trapper, meaning, in adorable appearance He disguises the same in whichever place He reaches; as He met in the form of ‘Jinda Baba’ on the bank of river Bein; in Satlok He was found in the form of God / Akaal Purush; and here in Uttar Pradesh in the form of ‘Dhanak’ (weaver) ‘Kartar’ (complete God) himself is seated. By remembering the tip-off mutual talks and by apologizing filled with emotions Nanak Ji is telling ‘Honestly I say that He only in the form of Dhanak (weaver) is Satpurush ie. Akaal Murat.

Conclusion: The same Jinda Baba has descended yet again to liberate souls and is playing divine spectacle in the cover of the great Tatvadarshi Sant Rampal Ji Maharaj. He is none other than God Kabir. Take refuge, get the same salvation mantras as respected Shri Nanak Dev Ji got chanting which he attained salvation and is leading a happy life in the ultimate abode ‘Sachkhand’ and has got relieved from the cycle of birth and rebirth.