Traits of Complete Guru in Raag Maru, Mehla 1 of the SGGS 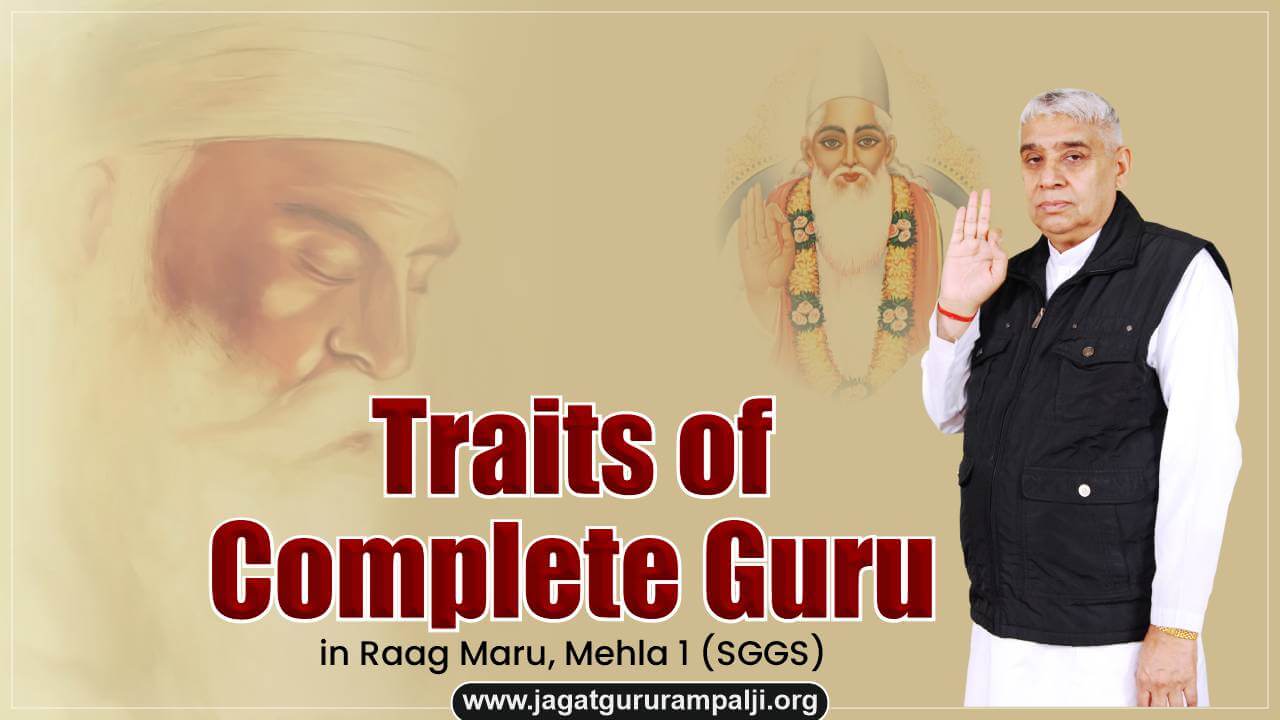 Akaal Purush Kabir Saheb was the guru of respected Shri Nanak Dev Ji. He met him on the river Bein while Nanak Dev Ji was in deep meditation remembering God. Kabir Saheb provided him true spiritual knowledge. Satpurush Kabir Saheb showed Nanak Ji Sachhkhand and narrated to him the whole account as to how did He create the entire nature with his word power in six days and after that he sat on the throne on the seventh day.

In the same context of providing Tatvagyan guru of Nanak Dev Ji ie. Kabir Saheb Ji (traits being explained in Rag Maru Mehla 1, Sri Guru Granth Sahib Ji) explained to Shri Nanak Ji how was the creation of Akshar Purush done by one of His sons named Achint (who was also created by Him) and later the owner of twenty-one universes ie. Satan Brahm-Kaal was created by Him out of an egg and what all mischief did Jyot Swaroopi Niranjan-Kaal did in the eternal world Satlok which made Akaal Purush/Param Akshar Brahm expel him from the divine land along with Goddess Durga and we all souls who are trapped at present in his web on this earth and are suffering day and night.

After seeing Sachkhand and returning on the earth Guru Nanak Dev Ji glorified the traits of the complete guru Kabir Saheb in Raag Maru, Mehla 1 which have been scripted in pious Sri Guru Granth Sahib on page no. 1037. It has been well described in this sacred speech of respected Shri Nanak Dev Ji that Jyoti Niranjan -Kaal created the secret place, Brahm Lok, in his twenty-one universes where he resides with his wife Goddess Durga and both of them gave birth to triple Gods Brahma, Vishnu, and Shiv and equipped them each with one quality ie. Brahma Ji with Rajogun, Vishnu Ji with Satogun, and subsequently Shiva Ji with Tamogun.

Read Also: All About 3 Gunas (Qualities) Sattva, Rajas and Tamas

Akaal Purush gave four Vedas to Brahm-Kaal which automatically came out at the destined duration from within Kaal; who; noticing that Vedas glorify Param Akshar Purush/Satpurush and provide the way to attain salvation destroyed the relevant portion. Therefore, God Kabir Saheb descends in this deceased world to impart true spiritual knowledge and to liberate all souls.

Guru Nanak Ji glorifies his guru Kabir Saheb in Raag Maru, Mehla 1 scripted in Sri Guru Granth Sahib that the Saint who will explain the aforesaid will be a true spiritual leader because the complete guru is one who resolves all our doubts through Tatvagyan. He provides scriptures based on true worship and tells the true salvation mantras ‘OM-Tat-Sat’ (coded-evidence in Shrimad Bhagwat Gita Chapter 17 verse 23) chanting which souls attain emancipation.

Let us have a look at the sacred speech of respected Shri Nanak Dev Ji in Raag Maru, Mehla 1 in SGGS

The traits of the complete guru are being described in this sacred speech of Nanak Ji mentioned in pious Sri Guru Granth Sahib on Page no.1037.

The essence of the aforesaid sacred speech is that the Saint, who will narrate the whole story of nature’s creation and will tell who came out of the two-halved egg and created the Brahm lok in the vacuum space i.e. gave rise to Brahma, Vishnu and Shiv in a secret place, and who is that God who made Brahm (Kaal) narrate the four Vedas (Holy Rigved, Yajurved, Samved and Atharvaved) and that the Purna Parmatma makes every living being say whatever He wishes, if you find a saint who fully tells about all this knowledge, then go to him. He who clears up all your doubts, only he is a Complete Saint i.e. is Tatvadarshi (Enlightened Saint).

Aforesaid, the sacred speech of respected Shri Guru Nanak Dev Ji in Raag Maru, Mehla 1 of the Sri Guru Granth Sahib Ji describes the traits of a complete guru and proves that God Kabir Saheb created the entire universe with his word power. He created Brahm-Kaal and then further the creation of Tridev was done by Kaal and Goddess Durga. God who is the creator is in human form and has descended yet again on earth and is playing the divine spectacle in the cover of great enlightened Sant Rampal Ji Maharaj. Come take refuge and become worthy for the attainment of salvation and reach the same Sachhkhand where Guru Nanak Ji resides now and is relishing all comforts.