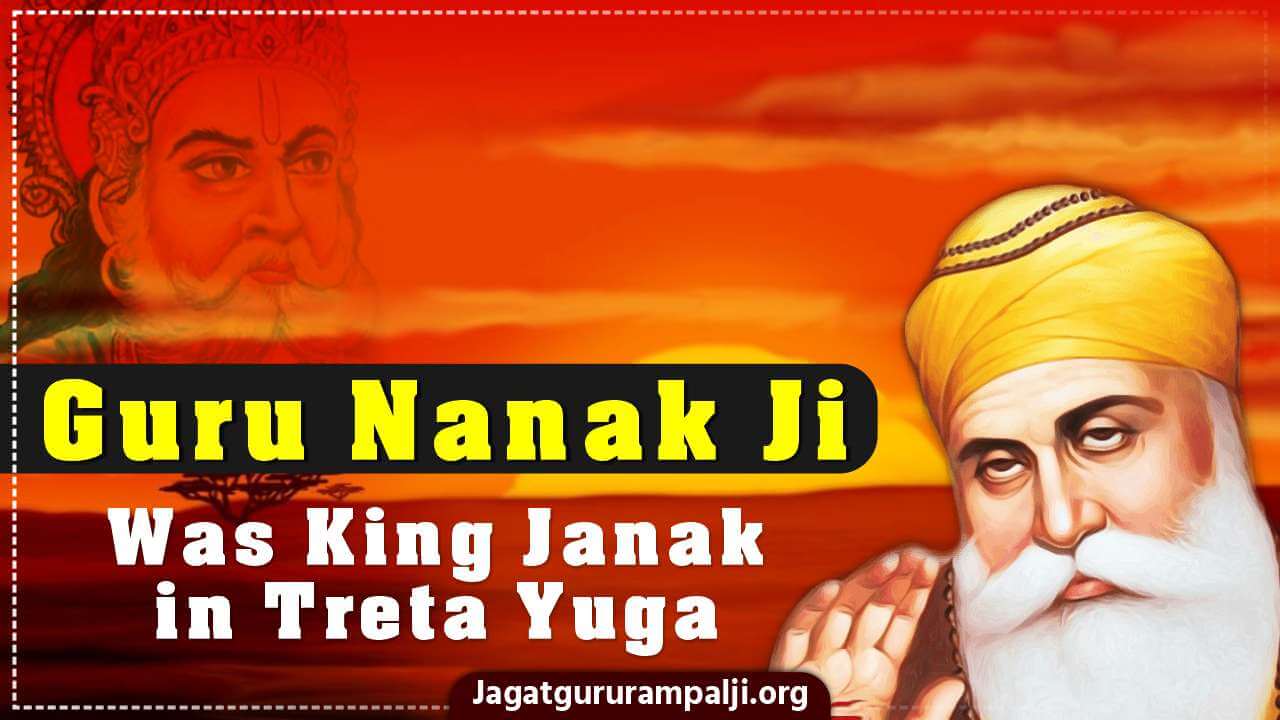 Guru Nanak Dev Ji was the disciple of Akaal Purush/Satpurush KavirDev who met him in Jinda Baba form on river Bein while the devout soul was meditating remembering God. Sukshma Veda ie. the nectar speech of Sachidanandghan Brahm and the evidence in Bhai Bale Wali, Janam Sakhi, in Sri Guru Granth Sahib on Page 423 in ‘Sakhi Ajite Randhaave (Ajita Randhawa) Di’ proves that the same soul Nanak Ji was King Janak in Treta Yuga and Harichand in Dvapara Yuga. In Kalyug, the same soul became famous as Nanak Dev Ji.

Both Nanak Ji and Jinda Baba had a spiritual discussion at that time, on the bank of river Bein and God Kabir Saheb provided true spiritual knowledge to Nanak Dev Ji. He told him that you have had several human births amongst which in few you had been the King and have relished all comforts in human life. You had done worship with great reverence still you have not been liberated from the cycle of birth and death and are suffering in the twenty-one universes of Brahm-Kaal. Jinda Baba ie. God Kabir Saheb at the request of Nanak Ji took the pious soul to the eternal world Sachhkhand and showed him His entire creation. Nanak Dev Ji met Akaal Purush Kabir Saheb in His real form in Satlok then he believed that God is in human form. After three days Jinda Baba/Param Akshar Purush released the soul back into the body and later provided true salvation mantra Satnam and Sarnam to Nanak Dev Ji chanting which he attained salvation.

This article will focus on providing evidence from Bhai Bale Wali, Janam Sakhi, in Sri Guru Granth Sahib on Page 423 in ‘Sakhi Ajite Randhaave (Ajita Randhawa) Di’ that Nanak Ji’s previous birth was King Janak the father of Sita Ji in Treta Yuga and how did the devil Brahm-Kaal cheated the same soul Nanak Dev Ji when he was King Janak?

Moving ahead, we will discuss

How Did Brahm-Kaal Cheated King Janak?

It has been mentioned in Sukshma Veda in the nectar speech of Sant Garibdas Ji Maharaj in ‘Brahm-Bedi’ speech no. 40 that

Meaning: Dhruv and Prahalad who were the worshippers of Kaal are believed to have reached great Heaven also King Janak Bidehi falls in the same category who went to Heaven/Vishnulok in an aircraft after death. On the way, King Janak granted half of his auspicious deeds to 12 crore suffering souls in Hell due to which the Hell became empty. It is the constitution of Dharamraj that the soul has to bear pain in Hell because of the bad deeds incurred; also he will relish comforts in Heaven as a result of virtuous deeds. But King Janak broke that law of Dharamraj and emptied Hell.

Let us understand in detail; How does butcher Brahm Kaal cheats innocent souls?

God Kabir Saheb met the devout soul Nanak Dev Ji when he was King Ambresh in Satyug and gave him true spiritual knowledge but he did not agreed to his way of worship and did holy Bhakti of Vishnu Ji with which he gained spiritual powers and attained heaven/Vishnulok. In Treta Yuga, the same soul King Ambresh was King Janak (proof in Bhai Bale Wali Janam Sakhi on Page 423: Sakhi Ajite Randhaave (Ajita Randhawa). Great Sage like Sukhdev Ji also took refuge of the God-loving soul, King Janak.

King Janak performed several Yagya with 100 tons Ghee, organized several community meals, and donated many cows in his human birth with which he gained auspicious deeds. After completion of his destined stay in the mortal world when he left this perishable cover; an aircraft from Vishnu Lok came to take him to Vishnulok/Heaven in which there were few ‘Parkhads’ along with few ‘Yamdoots’. While the plane was passing from near Hell; King Janak heard the screaming of many souls. Humble Janak Ji inquired from ‘Parkhads’; Who are they? And why are they screaming? The ‘Parkhads’ told that these are 12 crore souls suffering in hell because of sins they have incurred in their human life. King Janak told them to release the suffering souls. He was told that at this place his order does not work. Parkhads told Janak Ji that we follow the orders of Dharamraj. King Janak called Dharamraj and told him to release these 12 crore souls from Hell to which Dharamraj denied. 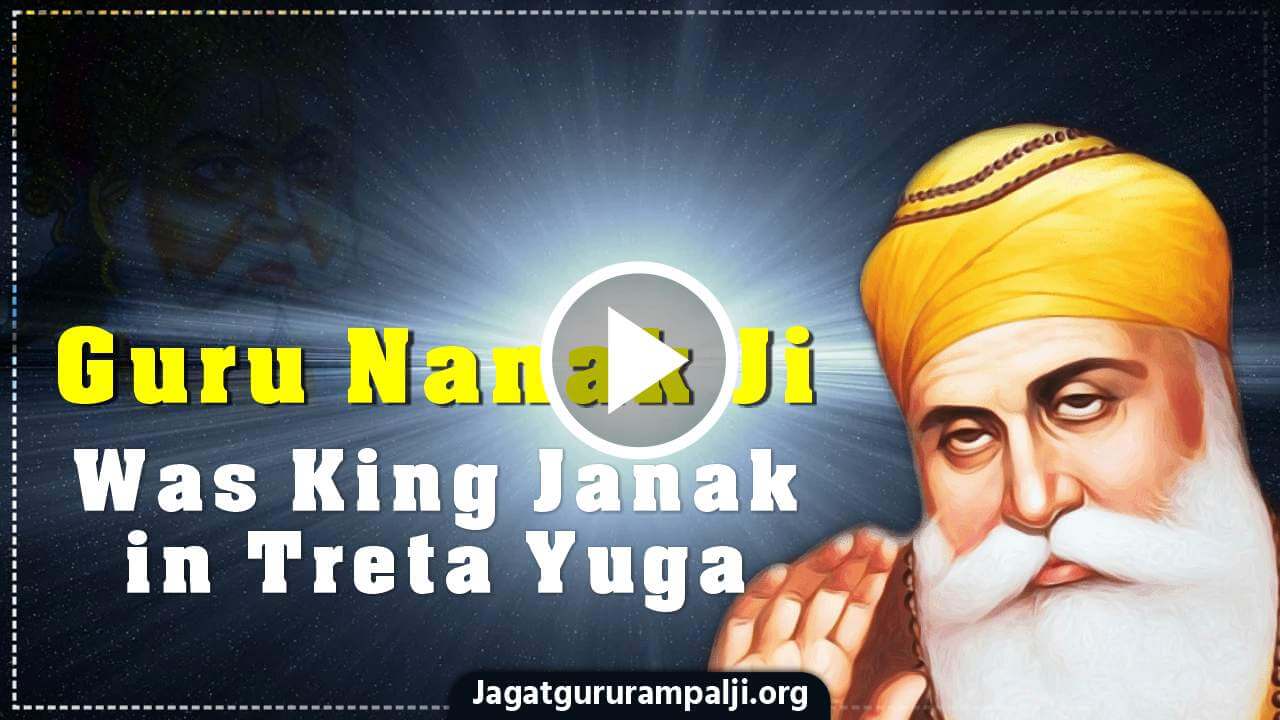 King Janak was a humble soul and could not bear the pain of those 12 crore souls suffering in Hell and told Dharmraj that he will also remain with them and will not move ahead. Dharamraj told King Janak that according to the constitution of God neither can he release these suffering souls nor can leave Janak Ji suffer in hell since he is authorized to stay in heaven because of his virtuous deeds. But Janak Ji became stubborn and did not move towards heaven. Then, Dharamraj adopted the Chanakya policy. He said these souls can be relieved only if you take the resolution to grant half of your auspicious deeds to them to which King Janak happily agreed. The same was done. After that, all 12 crore suffering souls were relieved from Hell and were shifted to Heaven via. separate aircraft where they relished comfort along with King Janak. King Janak was highly glorified because of the mercy he showed for those suffering souls. Dharamraj’s law was broken and Hell got empty.

What Misery Happens to the Soul Who Performs Arbitrary Worship?

Due to a lack of true spiritual knowledge, King Janak favored those souls but according to the legislation of Dharamraj after the completion of their tenure basis virtuous deeds by King Janak, those souls again had to come to hell to suffer due to their sinful deeds still not borne.

Important: Welfare of soul is only possible with true worship; by chanting Satnam and Sarnam.

Note: This is how Brahm-Kaal cheats innocent souls. First, the souls perform arbitrary worship which does not provide them attain salvation then whatever good deeds they do on earth like performing Yagya, organizing community meals, and donating cows and the like they gain accomplishments, their virtuous deeds enhance which Kaal tactfully wastes as happened with King Janak. King Janak’s stay in Heaven was for a longer duration because he had many good deeds stored in his devotional account but half of his virtuous deeds were distributed to 12 crore suffering souls. After the completion of his tenure in Heaven King Janak also suffered in 84 lacs life forms and remained in the trap of Brahm-Kaal. He remained in the vicious cycle of birth and death. Both Nanak Ji as well as those souls were cheated.

Therefore, it has been said in Tatvagyan

Meaning: If someone gets rid of any soul from birth and death (means attainment of Heaven and Hell again and again), then there is no bigger righteousness than that. Only the supreme Saint (Tatvadarshi) can do this who is the favorite of God.

Important: Merciful God Kabir took the same soul of Nanak Ji who was King Ambresh in Satyug and King Janak in Treta Yuga (discussed in Bhai Bale Wali Janam Sakhi on Page 423: Sakhi Ajite Randhaave (Ajita Randhawa) in refuge again in Kalyug then finally the welfare happened of that soul by doing true worship. He finally got relieved from the trap of Brahm-Kaal which otherwise did not happen with arbitrary worship.

Let us move ahead and understand with one speech of God Kabir Saheb that Nanak Ji obtained eternal peace with true worship.

Meaning: During summers Sandalwood tree remains cool. To save themselves from the scorching heat the snakes wrap themselves around Chandan tree still they do not feel calm due to the effect of poison within. Only the body gets cool but from within the snake still feels warm and remains restless. Unless the poison is destroyed the Snake will not get peace.

Important: With the aforesaid speech, God Kabir Saheb is providing a message to human beings that the root cause of the problem needs to be destroyed to attain peace. Humans have the long illness of birth and rebirth therefore, the soul remains restless and makes efforts to search for peace. With the unscriptural worship, the seekers might feel they are getting satisfaction but their sins do not destroy and the soul keeps wandering in search of peace. Unless that sin-form poison is not destroyed the soul will never be at ease. Sins are only destroyed with true worship of God Kabir Saheb provided by an enlightened saint.

Note: Guru Nanak Ji obtained the same true worship from God Kabir Saheb and attained eternal peace. He is in Sachkhand at present after getting relieved from Kaal’s trap.

Evidence in Bhai Bale Wali Janam Sakhi on Page 423: Sakhi Ajite Randhaave (Ajita Randhawa) proved that the same soul respected Shri Nanak Ji was King Janak in Treta Yuga whose welfare happened in Kalyug when he was Nanak Ji by the grace of Almighty KavirDev. God Kabir Saheb has descended on earth yet again for the welfare of human beings and is playing the divine spectacle in the cover of great enlightened Sant Rampal Ji Maharaj. He is the Savior. Identify God, take refuge, and get your welfare done. This is the Bhakti Era going on in which all souls who will do true worship will be liberated from the web of Brahm-Kaal and will attain Sachhkhand by the grace of Akal Purush/Satpurush Kabir Saheb.