Is Salvation Possible by Gayatri Mantra as per Gita & Yajurveda? Let's find out 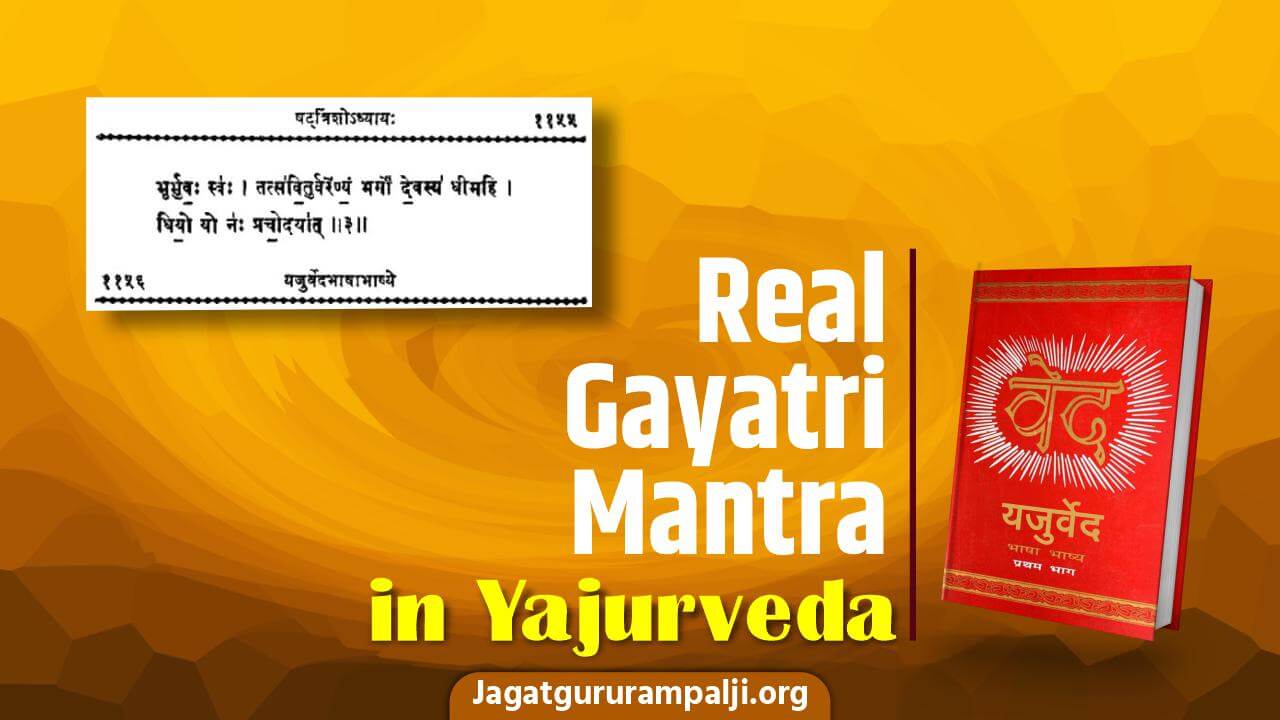 Recitation of true mantras helps the soul attain God. The wrong mantra does not provide any benefit to the seeker. Vedas glorify the creator of the universe, Param Akshar Brahm who is attained by chanting real salvation mantras provided by the enlightened saint. Gayatri mantra is one such mantra that is wrongly chanted by devotees to date because unfamiliar with the knowledge of Vedas; the cunning people have wasted the precious human birth of innocent seekers by telling them to recite the Jaap of the Shloka of Gayatri Mantra ‘OM Bhurbhuva Swaha Tat Savitur.....’ considering it to be the provider of salvation. About this, in folklore and legends, it has been said that this mantra is the gist form of the mantra taken from the four Vedas. The benefit of Salvation is obtained from this only which is a myth.

Let us study facts from holy scriptures and find out; Can Salvation be attained by the Jaap of Gayatri Mantra? This writeup will provide shreds of evidence from pious Yajurveda regarding what is the real Gayatri mantra?.

The following will be the highlight of this article.

What is the Gayatri Mantra?

Arya Samaj only emphasizes ‘Hawan Yagya’. The followers of Arya Samaj believe that Maharishi Dayanand Saraswati who is the originator of Arya Samaj has introduced the famous ‘Gayatri Mantra’ for the devotee society which is prevalent amongst the believers of Hinduism. They chant Gayatri Mantra with a belief that it will help them get connected with the divine. Here, it is imperative to mention that the famous Gayatri Mantra has been mentioned in pious Yajurveda Chapter 36 Mantra 3 and is not introduced by Maharishi Dayanand.

Note: This mantra clarifies that ‘OM’ is not prefixed. Due to ignorance, this is wrongly recited.

Please Think- Is it possible to get self welfare done by just reciting a mantra (Verse) of a scripture? No, not at all.

What is the Benefit of Chanting Gayatri Mantra?

There is the glory of God in the mantra mentioned in scriptures and also the method to attain Him is mentioned. Until that method is not accepted till then, it will be impossible to attain self-welfare, that is, attain Godly benefit. It has been said in pious Gita Chapter 17 Verse 23 that ‘OM-Tat-Sat’ is only the mantra to attain complete God. It is remembered by three methods to attain salvation. ‘OM’ mantra is of Brahm, that is, Kshar Purush, ‘TAT’ (is indicative which is told to the one who takes initiation) mantra is of ParBrahm, that is, Jaap of Akshar Purush and ‘SAT’ mantra (is indicative. This is also called Satshabad, that is, Sarnaam. This will be told to the one who will take name initiation) is of complete God, that is, Param Akshar Brahm, Jaap of Satpurush. The method to chant this Jaap (OM-Tat-Sat) is also by three methods. Complete salvation is possible with this only. The ignorant person about the knowledge of Vedas; the originator of Arya Samaj Shri Dayanand Ji did not even know to which Vedas does this sentence belong.

‘Satyarth Prakash’ (published from Dayanand Math Dinanagar Punjab) in Sammulas 3 on page 38-39 while translating this mantra (Bhurbhava SwaH Tat...) it has been written that ‘Bhu: Bhurva SwaH’ three words are from ‘Taittiriya Aranyaka’, and nothing has been written about the remaining part of mantra (Tat savituH...) from where has this been taken?. Swami Dayanand Ji has done the opposite meaning of this mantra in ‘Satyarth Prakash’ also in Yajurveda (Bhurbhava...). ‘Taittiriya Aranyaka’ is an Upanishad in which the experience of some sage is mentioned. Whereas Vedas are God-given knowledge. We have to depend on Vedas and not on the book written by some sage based on his experience. If the ‘Satyarth Prakash’ book was not exposed then after a few days, it would have also taken the form of an Upanishad. While writing other books in the coming times; the support of ignorance of ‘Satyarth Prakash’ would have been taken and even more ignorant books would have been created.

Note: ‘Taitiriye Aarankya’ was a sage Vaishampayan. His disciple was ‘Yagvalakya’. Both the guru and disciple had strained relations. The guru asked to return the knowledge that he has provided. Yagvalakya puked that knowledge. It has been said that blooded puke was lying outside that was consumed by some birds. The disciples consumed that; means those who accepted that blooded puked knowledge was called ‘Taittiriya Aranyaka’ and later it was scripted. The same was forwarded by Maharishi Dayanand who wrote it in ‘Satyarth Prakash’ book. While translating these three mantras ‘Bhur Bhuwah Swaha’ he accepts that ‘I have taken from ‘Taittiriya Aranyaka’ and for rest, I do not have any knowledge’. In this way, lokved was fed in everyone. The followers/Acharyas of Arya Samaj have misled saying this is the discovery of Maharishi Dayanand. He has discovered this from scriptures. He is considered to be knowledgeable of Vedas but the reality is he did not know from where has this mantra been taken?. He did not know Gayatri mantra is mentioned in Yajurveda Chapter 36 Verse 3.

Let us understand with the help of an example:- If someone is solving a Maths question and is not getting it correct, then the main explanation is reread as the basis for finding the correct solution. Then that question is solved. If we keep trying to solve the wrong question considering it as the base, then the solution is impossible. Similarly, in place of books written based on the experience of former saints and sages, reciting the scriptures on the same basis, re-reading, and doing spiritual practice basis them makes the attainment of God and salvation possible.

It has been written in Gita Ji that ‘O Arjun! When your intellect; confused by the misleading words will become steady on one divine element ie. will remain steadfast on true spiritual knowledge then you will attain the state of perfect yoga. The meaning is; then your devotion will start.

As if the traveler instead of going towards the destination; is going in another direction, then his journey is on the wrong path. With that, he cannot reach his native place. When he will abandon the wrong path and will walk on the path of truth then only it will be possible for him to attain the destination.

Special Consideration: Recitation of Gayatri Mantra mentioned in pious Yajurveda Chapter 36 mantra 3 is only to become familiar with the qualities of God. The method of attaining that God is different. In Yajurveda Chapter 40 Mantra 10 and in pious Gita Ji Chapter 4 Verse 34 it is said that ‘ask enlightened Saint about the knowledge to attain complete God and to understand the true spiritual knowledge’.

Moving ahead we will study whose mantra is ‘OM’ which is wrongly prefixed in the Gayatri mantra and the whole ignorant devotee community chants it with reverence.

OM is the Mantra of Brahm-Kshar Purush

The God who is the giver of the knowledge of Veda and Gita also does not know the procedure to attain the complete God. He has given the knowledge of only his way of worship (Brahm Sadhana) in Gita Chapter 8 Mantra (Verse) 13 and in Yajurveda Chapter 40 Mantra (Verse) 15. “OM” (ॐ) name is chanted alone, clubbing it with some sentence does not provide salvation. This mantra in Yajurveda Chapter 36 Mantra 3 praises Param Akshar Brahm, that is, Supreme God. Prefixing ‘OM’ would be the disregard of the glory of Satpurush / Shabad Swaroopi Ram, that is, KavirDev, hence, is a blunder.

It has been said in Gita Chapter 8 Verse 13 that mine (Brahm’s) is only one-word ‘OM’ to chant, nothing else, remember that while chanting. ‘OM’ (ॐ) mantra is not even in Yajurveda Chapter 36 Verse 3. This has been added by those who tell worship against scriptures which is inappropriate. This is the disregard of God’s command.

Example:- If an ignorant person weld bolt and nuts with a motor vehicle piston and says that this piston is more useful, then is that person an engineer? The same condition is of ignorant sages and saints who chant ‘OM’ word while adding with a sentence that now this mantra has become more useful. Being against the scriptures is arbitrary conduct (worship).

It has been written in pious Gita Ji Chapter 16 Verse 23-24 that ‘abandoning the injunctions of the scriptures, the seeker who acts according to the whimsical desires, neither attains perfection, nor supreme state/salvation, nor happiness. Therefore, for devotion basis scriptures truth shall be accepted and the untruth shall be abandoned.

In the same way, with the nectar knowledge of the scriptures, the knowledge of the glory of God is obtained. Read that once or a hundred times. If the method of attaining benefit from God is not obtained from a complete saint, then the entire knowledge is useless. Like, if someone says that “take the medicine you will become healthy'' if this is repeated frequently and the medicine is not taken then you cannot become healthy. By taking medicine from a complete ‘Vaidh’ (doctor) one can be free from disease. In the same way, complete salvation is possible only by obtaining complete name chanting procedure from a complete saint and doing Sadhana by remaining in Guru Maryada.

That complete salvation attainment devotional method, sin-destroyer scriptures based worship of complete God is available with Jagatguru Tatvadarshi Sant Rampal Das, which is God-given. Do not delay; please obtain it free. Do not waste your precious human birth in doing Sadhana which is against the scriptures told by ignorant saints and sages.

Note:- The readers should read and think- Where do they stand?

Translation: The giver of the knowledge of Ved ie. Brahm is saying that (svaḥ) His native blissful (bhuvaḥ) in the space, that is, Satlok and Anamayalok (Bhūr) self-manifested is the complete God. That God is (savitur) the provider of complete happiness, He is the creator of all (tat) that invisible, that is, unmanifested, but in the form (vareṇyaṃ) superior (bhargo) creator of all universes; with the highly effulgent body (devasya) that Supreme God  (dhīmahi) prayer, means, scriptures-based worship, that is, wisely (yaH) that God who nurtures everyone, that (naḥ) free from illusion (dhiyoH) to wisely, means, do scriptures-based true worship (prachodayāt) inspire everyone.

Meaning:- In this Mantra No 3 there is an endorsement of Yajurveda Chapter 40 Mantra 8 that the (Kavirmanishi) complete scholar, that is, who is aware of the past, present, and future, is Kavir Dev (Supreme God Kabir). His body is not made of five elements (swayambhuH paribhuH) that God appears Himself. The body of complete God is made up of one element. Therefore, it has been said in Yajurveda Chapter 1 Verse 15 and Chapter 5 Verse 1 (AgneH) the body of (tanuH) God is highly effulgent (asi). Worship that kind Almighty, happiness-giving God with a true heart and according to scriptures. That complete God manifests above in Satlok. This is the request to God, that He may inspire all living-beings to do scriptures-based true worship. 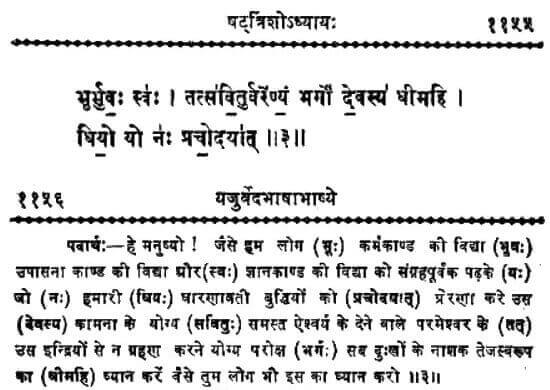 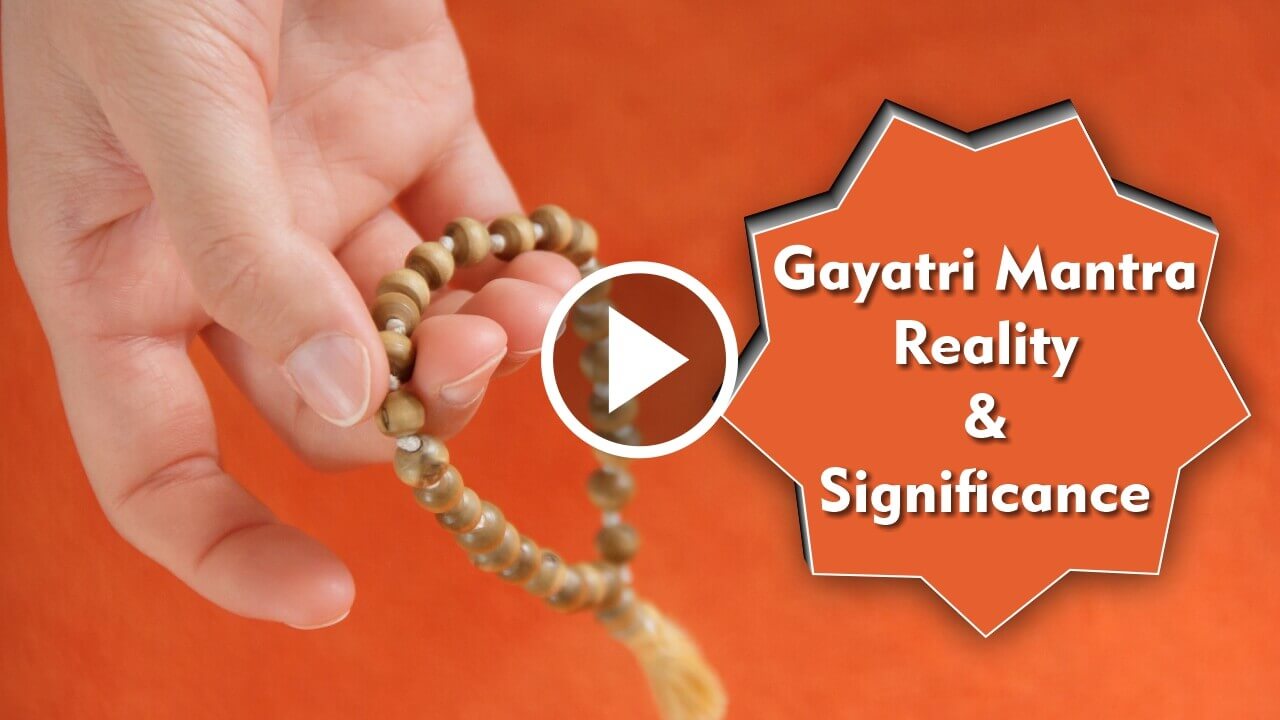 Is Gayatri Mantra the Salvation Mantra for Souls?

Although Gayatri Mantra glorifies Supreme God it cannot provide salvation to the soul. As stated above, the true salvation mantra is mentioned in Gita Chapter 17 Verse 23 which is OM-Tat-Sat (indicative) which works when granted by a Tatvadarshi saint. Gayatri Mantra does not provide any benefit to seekers. It is not the provider of salvation.

Only a complete saint can solve riddles of true mantras hidden in holy scriptures. Jagatguru Tatvadarshi Saint Rampal Ji Maharaj has provided evidence that the actual Gayatri Mantra is not the discovery of Maharishi Dayanand. This is a myth. Gayatri mantra glorifies Supreme God Kabir Dev and is mentioned in Yajurveda Chapter 36 Verse 3. ‘OM’ (ॐ) mantra added in front is the work of ignorant saints. The readers are advised to take refuge of great Saint Rampal Ji Maharaj and do true worship to attain God.