Evidence of Nature’s Creation in the Holy Rigveda 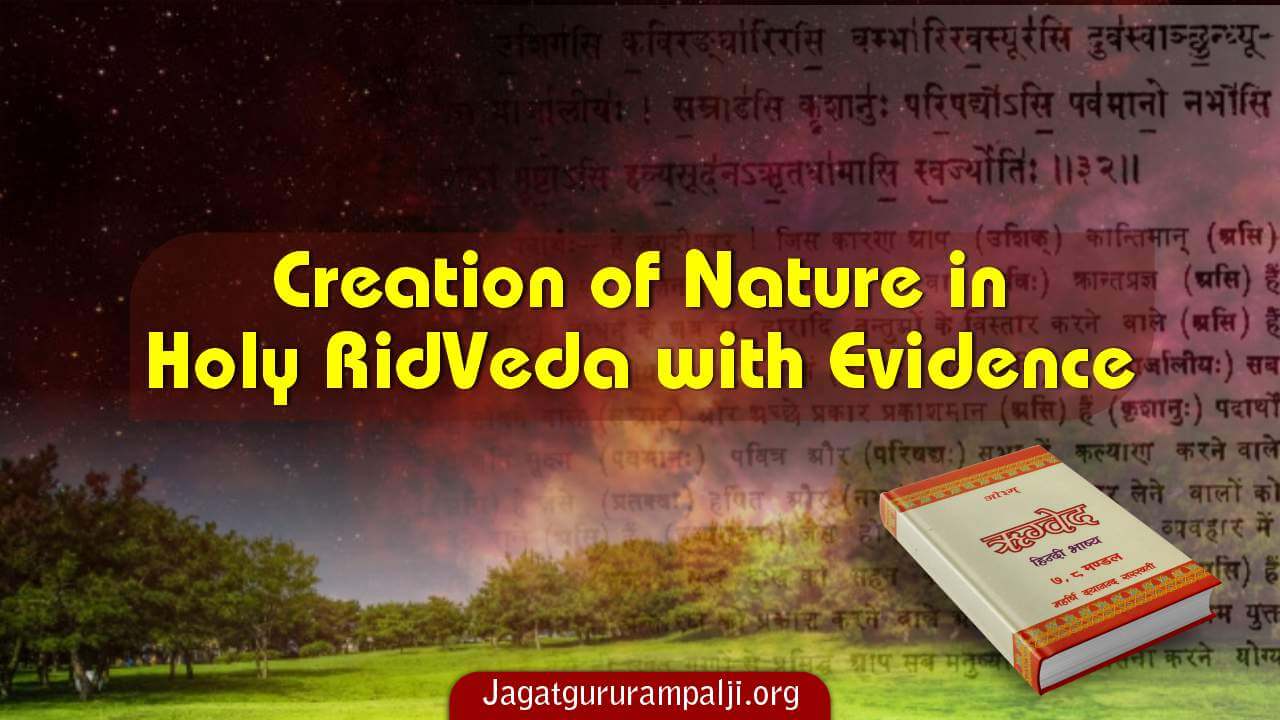 So far in the series of Vedas, we have known who the supreme God is, what His name, form, and qualities are. Now we will see how the Supreme God created the whole nature and all these universes? The hymns of creation of nature are scattered in Vedas and are compiled by Tatvadarshi Sant Rampal Ji Maharaj based on the complete spiritual knowledge given by Supreme God Kabir Sahib. This is what the Holy Rigveda tells about the origin of the universe.

Creation of Kshar Purush / Kaal / Brahm in the Holy Rigveda

Translation: Thereafter, Viraat i.e. Brahm, who is also known as Kshar Purush/Kaal/Jyoti Niranjan, originated from the Supreme God’s word power. After this, the Supreme God, who is greater than Viraat Purush i.e. Kaal God, perfectly created the universes of Kaal-Brahm and Par Brahm and other smaller regions like earth in those universes.

Meaning: - After the creation of the three heavenly places (Agam lok, Alakh lok, and Satlok), the all-powerful Supreme God gave rise to Viraat i.e Jyoti Niranjan (Kaal/Brahm). This same evidence is also in Bhagavad Gita(3:15) that Brahm originated from the Eternal God. Holy Atharvaveda Kand 4.1.3 also says that Brahm originated from Purna Brahm i.e Supreme God. That Supreme God created all the regions of earth and heavens and is the master of Brahm (Kaal).

Universe Creation of Akshar Purush/ParBrahm in the Holy Rigveda

Translation: (Ev) similarly, who is somewhat (Purush) God, he is Akshar Purush i.e. ParBrahm (ch) and (idam') he (yat') who (bhootam') is already borne (yat') who (bhaavyam') will be born (sarvam') all (yat') by effort (annen) through food grain (atirohti) develops. Akshar Purush also (ut) doubtful (amrtatvasya) of salvation (ishaanH) is master;

Translation: Similarly Akshar Purush i.e. Par Brahm is also God to some extent. Those who are already borne or who will be born in the future, all grow through food-grains earned through hard work. Salvation given by this Akshar Purush is also doubtful; which means that even Akshar Purush is somewhat God, but is not a giver of complete salvation.

Meaning: - In this Rig Veda Mantra is a description of ParBrahm (Akshar Purush) who is equipped with some qualities of God. But even by worshipping him, one cannot achieve complete salvation. Therefore, he is called a doubtful master. He is said to be like God because, like Kaal, he does not eat human souls after roasting them on Tapatshila. But in his universes too, living beings need to work hard to feed themselves. Their bodies grow only with food and they get paid according to their Karmas. The average life of humans in the universes of Par Brahm is longer than the humans of Brahm’s universes but death, rebirth, and suffering in the form of 84 lakh species is inevitable.

Translation: (Asya) this Akshar Purush has (etavan') only this much (mahima) power (ch) and (PurushH) that Param Akshar Brahm i.e. Supreme God (atH) than him (jyaayaan) is greater (vishwa) all (bhootani) Kshar Purush, Akshar Purush and all the living beings in their regions and in Satyalok (asya) of this Param Akshar Purush (paadH) are one foot i.e. are just a small part of Him (asya) thisGod’s (tri) three (divi) divine realms like Satyalok – Alakh lok – Agam lok (amrtam') eternal (paad') are the other foot.

Translation: This Akshar Purush(ParBrahm) has this much power. And Supreme God is greater than him too. Kshar Purush(Kaal), Akshar Purush, all the souls in Satyalok, and living beings in the lower universes are His one foot i.e. just a small part of Him. The three divine realms Satyalok – Alakh lok – Agam lok, are His other eternal foot i.e. whosoever have originated in any of the universes is a part of SatyaPurush i.e. Supreme God only.

Meaning: - Akshar Purush mentioned in mantra 2 above has only this much power. But the Supreme God, Kavir Dev is greater than him. All the universes are positioned on a fraction of a hair of His body. In this Mantra, only three eternal realms are mentioned because the fourth Anami lok dates back before all other creation. Bhagavad Gita(15:16&17) too, mentions these three Gods Kshar Purush, Akshar Purush and other than these two, Param Akshar Purush i.e. Supreme God.

Translation: The Eternal God(Param Akshar Brahm) is seated in the three divine realms-(Satyalok – Alakh lok – Agam lok)-like foot above i.e. in the upper part. His other foot, then appears in the lower universes i.e. the Supreme God is pervasive everywhere, even above the eater Kaal-brahm i.e. Kshar Purush and the non-eater ParBrahm i.e. Akshar Purush;

Meaning: - Supreme God, who is the Creator of the entire Nature, is Himself present in three different forms in these three heavenly places (Satlok, Alakh lok, Agam lok) in the upper part of His creation. Later, the lower universes of Brahm and Par Brahm came into existence after separation from that divine place Satlok. But the power of the Supreme God is present over everyone, even above the eater Brahm i.e. Kaal (because Kaal-Brahm eats one-lakh human beings daily because of a curse on him) and the non-eater Par Brahm i.e. Akshar Purush (Par Brahm does not eat human beings, but the cycle of birth and death and karmic punishments, remain the same in his universes. It means that the Supreme God is the Master of the lineage and His supremacy is over all the universes and all the gods. Just like the range of a mobile tower, which is situated in one area, is extended in all directions. Likewise, Supreme God has extended His invisible power everywhere, by which He controls all the universes while sitting in one place.

Translation: The Viraat-form i.e. huge Kaal, who has a thousand hands, eyes and feet, that Kaal is encircling the twenty-one universes including Earth from all sides with his ten fingers i.e. fully controlling them. And he is also situated above all these universes.

Meaning: - In this Mantra, there is a description of Virat – Kaal with thousand hands. He is encircling the twenty-one universes i.e. keeps all those who are under him in full control. In the Gita, chapters 10 and 11 too, there is a similar description of this Kaal-Brahm, when Arjuna says, oh Sahasrbaahu i.e one with a thousand arms, I wish to see you in your (Chaturbhuj) four-armed form.

Translation: (Sapt) seven sankh universes of ParBrahm and (trisapt) the twenty-one universes of Kaal/Brahm (samidhH) tortured in the fire of sinful deeds as a punishment (krtaH) which does (paridhayH) in the circular boundary (aasan') is present (yat') who (Purusham') of the Purna Parmatma (yagyam') offers religious services according to the ordinances i.e. worships (pashum') bound like a sacrificial animal in the web of their actions (deva) devout souls (tanvaanaH) from the web of the bondage of sinful actions created by Kaal (abadhnan') liberates.

Translation: The seven sankh(700 Quadrillion) universes of ParBrahm and the twenty-one universes of Kaal/Brahm are in a circular boundary, in which souls are tortured as a punishment for their sinful deeds. But those devout souls who worship the Supreme God according to the ordinances, they are liberated from the bondage of their sinful actions, created by Kaal, in which they are trapped like a sacrificial animal.  Supreme God liberates those devout souls from the trap of Kaal, which means He is the liberator from the bondage i.e is Bandichhor.

Meaning: - The Supreme God tells the true way of worship to the living beings that are enslaved in the circular boundary of the seven shankh universes of Par Brahm and twenty-one universes of Brahm and are burning in the fire of their sinful actions. He makes them follow the correct way of worship and by breaking the trap of karma created by Kaal, liberates His devotee souls from the agony of tapatshila and the cycle of birth and death. That is why the Supreme God is also called Bandichhor, i.e. the liberator of the souls.
Its evidence also lies in Holy Yajurveda Adhyay 5, Mantra 32 - that Kaviranghaariasi: (Kavir') God Kabir (Asi) is (Ari) the enemy of (Angh) sins, which means that God Kabir is the destroyer of all sins. Bambhaariasi: (Bambhaari) the enemy of bondage i.e. the liberator, Bandichhor (Asi) is God Kabir.

Those Who Worship Supreme God Attains Satlok in Holy Rigveda

Translation: Who (devaH) flawless devout souls (ayagyam') in place of the wrong religious practice (yagyen) based on the religious act of true worship (yajant) worship (taani) they (dharmaani) enriched with the religious power (prthmaani) are superior (aasan') are (te ha) they only in reality (mahimaanH) equipped with the power of worship (saadhyaH) successful devout souls (naakam') the all pleasures giving Supreme God (sachant) on the basis of bhakti i.e. the earnings of the worship, attain. They go there (yatr) where (poorve) of the earlier creation (devaH) sinless divine souls (santi) live.

Translation: Those flawless devout souls, who give up the wrong way of worship, and worship according to the correct way told by God, they get enriched with the religious power, and become superior. They i.e. the successful devotees, in reality, equipped with the great power of bhakti(devotion), attain the complete happiness-giving Supreme God. On the basis of bhakti i.e. the earnings of the true bhakti, they go there where the sinless divine souls of the earlier creation live.

Meaning: - The devout souls who adopt the correct way of worship given by Supreme God, also become flawless i.e. pure because they give up every evil like consumption of meat and alcohol, bribery, corruption, etc. and become free from other vices too. By doing the scripture-based bhakti(devotion) those divine devout souls become rich with the earnings of bhakti and get free from the debt of Kaal. With the earnings of true worship, they attain the Almighty and go back to Satlok where the other divine souls of the first creation already live.

This means that apart from those souls who are trapped in the 21 universes of Kaal and 700 quadrillion universes of Parbrahm, there are still infinite souls who never failed in their loyalty toward their master - Supreme God. Those souls live in Satlok since eternity. The evidence is also given in Gita, chapter 8 verse 8 -10 that a devotee who worships the Supreme God according to the directions of the scriptures, he with the power of true worship goes to that Supreme God i.e also attains Satlok.

← Is Salvation Possible by Gayatri Mantra as per Gita & Yajurveda? Let's find out       Creation of Nature - Atharva Ved →