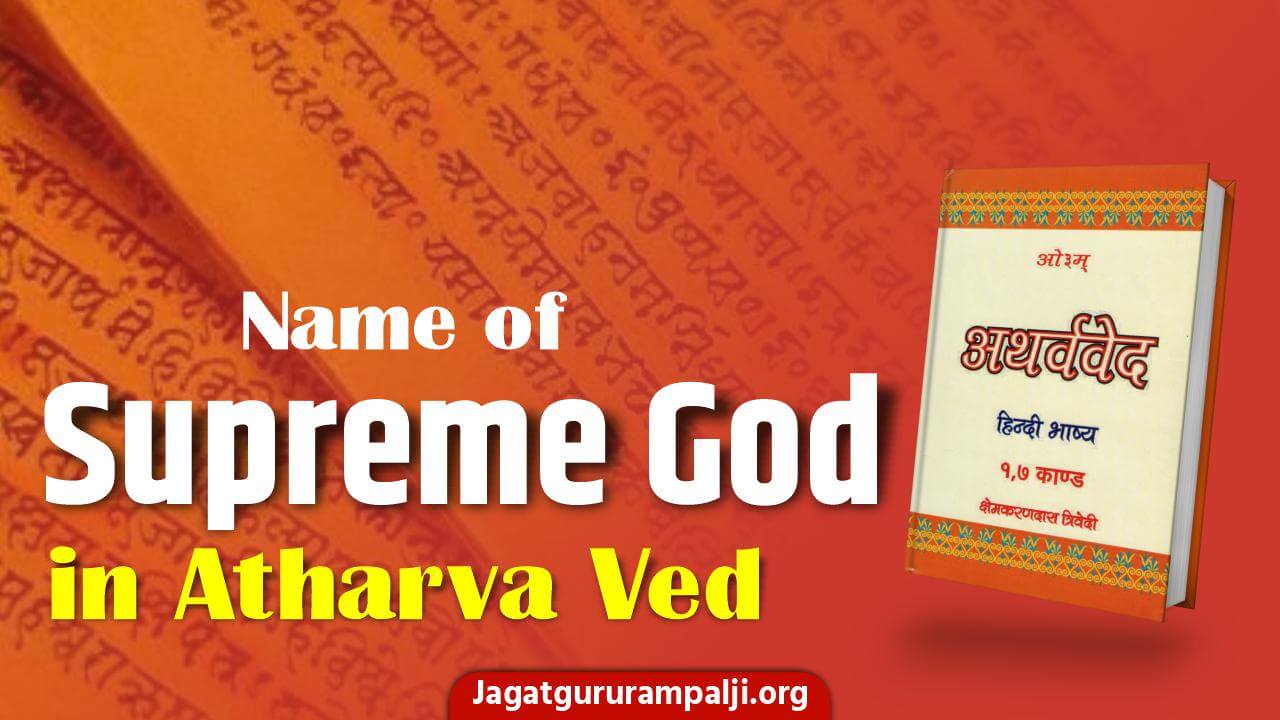 Vedas are the word of God. They glorify the Supreme God. There are five Vedas but devotee society is familiar with just four viz. Rigveda, Samveda, Yajurveda, and Atharvaveda. The fifth is Sukshama Veda which is the nectar speech of Sacchidanand Ghan Brahm means Supreme God/Param Akshar Brahm. All 5 Vedas provide evidence that Supreme God is the creator of entire universes. He resides in eternal world and descends in this deceased world to liberate His beloved souls from the web of butcher Brahm Kaal by providing true spiritual knowledge.

The facts described in the creation of universes provide information that Almighty Kabir fed four Vedas in the conscious of Brahm Kaal when he was expelled along with his 21 universes from immortal abode Satlok which came out automatically from his mouth through breath after the specified duration was over. He read them and got scared seeing they contain the information about Supreme God and if creatures trapped in his web will come to know his reality that he is Satan and tortures innocent souls for his selfish motive and Supreme God who is the ocean of happiness is some other than they will all worship Satpurush/Supreme God and will leave him. They will all be liberated then what will he eat? After that fearful Kaal destroyed those parts of Vedas which contained maximum glory of God along with true salvation mantras and presented the remaining details to the world.

In this article we will study Verses from pious Atharvaveda and know – Who is Supreme God? The following will be the focus points.

Let us elaborate all and study in detail. First a brief about holy Atharvaveda

The "Atharvaveda" is an ancient Hindu scripture known as the fourth Veda in the series written at the inception of Kalyug by great sage Ved Vyas. The first and oldest being Rigveda followed by Samveda and Yajurveda which were also written by him. The 4 Vedas available to us presently were compiled nearly 5000 years ago in Vedic Sanskrit when there was indeed no religion. At present these Vedas are also available in Hindi and some other regional languages

Note: Vedas were fed initially by Almighty Kabir in the consciousness of Brahm Kaal as already described. After great destruction when Kaal’s world is recreated, the Supreme God recreates Vedas through some sage/saint for the benefit of devotees.

Holy Atharvaveda is composed in Vedic Sanskrit and is divided in 20 Kaands (books) called Anuvaaks. It contains about 730 hymns with nearly 6,000 mantras.  Verses 1-7 in Kaand No. 4 Anuvaak No.1 provide information about the Supreme God who is the creator of entire universes. Almighty/Param Akshar Brahm/Satpurush created Adi Parashakti and Goddess Durga and rest of the entire creation. Holy Atharvaveda provide evidence that both the lower temporary world as well as the upper eternal world has been created by the Supreme God.

Let us read all 7 mantras in detail.

Atharvaved Kaand no. 4 Anuvaak no.1 Mantra no.1 - Supreme God is the Creator of Entire Universes

Meaning:- The immortal God Param Akshar Brahm by appearing Himself at the summit created eternal world Satlok with great passion like a weaver weaves clothes which is self illuminating and very vast and secured them in the upper region. He is the creator and nurturer. He created a somewhat permanent world (700 quadrillion universes) of Akshar Purush meaning ParBrahm and temporary world (21 universes) of Kshar Purush also called Brahm Kaal.

Atharvaveda Kand no. 4 Anuvaak no.1 Mantra no. 2 - Supreme God is the Creator of Adi Parashakti Who Holds the Universes Together

Meaning:- Universal Father, Param Akshar Purush created the first Maya Rajeshwari Shakti meaning Adi Parashakti and ordered her to hold the universes together with its gravitational force. In this way Supreme God created and established all universes which are holding each other together with the unending force of attraction.

Atharvaveda Kand no. 4 Anuvaak no.1 Mantra no. 3 - Supreme God Himself Narrates the Story of Creation Created by Him

Meaning:- Almighty tells correctly the knowledge about the nature created by Him, the knowledge of Universe and souls creation. He tells all to His personal disciple that He created Brahm Kaal with His word power from within His body. He secured all the universes, both the eternal divine realms above as well as below temporary universes of ParBrahm and Brahm Kaal.

Atharvaveda Kand no. 4 Anuvaak no.1 Mantra no. 4 - Supreme God is the Creator of Temporary and Eternal Universes

Meaning:- Param Akshar Purush/Satpurush created all upper eternal worlds from light with the element of Sky viz: Alakh lok, Anami lok, Agam lok, and Satlok with His word power which are highly illuminating. Similarly the temporary lower worlds of ParBrahm/Akshar Purush and Brahm/Kshar Purush were created by the Almighty with the element of earth and He established residential places and smaller regions in every universe.

Atharvaveda Kand no. 4 Anuvaak no.1 Mantra no. 5 - Supreme God is the Creator of Ashtangi/Goddess Durga

Meaning:- The Supreme God created Ashtangi meaning Goddess Durga/Prakriti Devi in eternal world Satlok which is the fourth divine realm. It is the world from where the lower regions originated. The Supreme God Kavir Dev is the King of Kings, Guru of entire universes and Satpurush from whom all got separated means Brahm Kaal, Goddess Durga and many souls.

Then all living beings born from the Union of Jyoti Niranjan (Kaal) and Durga (Ashtangi) started living in lower world means in Heaven and Earth. In this way Supreme God Kavir Dev completed the creation of the Universes.

Atharvaveda Kand no. 4 Anuvaak no.1 Mantra no. 6 - Supreme God Provides Knowledge of Creation of Universes Himself then Liberates His Dear Souls

Meaning:- Almighty tells correctly the knowledge about the nature created by Him, the knowledge of Universe and souls creation by Him. Param Akshar Brahm provides the knowledge of universe creation to His devotees who worship Him according to the prescribed way of devotion and takes them back to immortal abode Satlok which is the native place of all souls and from where we all came after getting separated from our happiness giving father (God). After the attainment of Supreme God for whom souls long for the souls feel delighted and happily glorify and adore Him saying 'Oh God, by your grace we the lost ones for infinite births have finally found our home.

Meaning:- Supreme God Kabir, the true Guru took me to Satlok which is the most blissful and beautiful place.

Atharvaveda Kand no. 4 Anuvaak no.1 Mantra no. 7  -- Supreme God – Kavir Dev is the Creator of All Universes And Souls

Meaning:- The eternal God in reality (whose evidence is also in Bhagavad Gita Chapter 15 Verse 16 & 17) is the Jagatguru meaning Guru and Father of the universe, is the basis of the soul. He takes pious souls in shelter and liberates all those who worship Him and take them to immortal abode Satlok. The creator of entire universes is KavirDev ie. Supreme God Kabir. Satpurush/Param Akshar Brahm being the creator of all universes and living beings with His word power is also called (Janita) Mother who has the qualities of not betraying like butcher Brahm Kaal, He only is our real father as well as brother. He is the supreme God Kavir Dev. He is the one who is glorified as

Who is Supreme God according to Atharvaveda?

Vedas do mention about several demigods but the curiosity amongst devotee society always remains in finding the answer to the most enduring question as - Who is the main God in Vedas?

The evidence from Atharvaveda Kaand No. 4 Anuvaak No. 1 Mantras 1-7  clearly state that God Kabir Saheb/Kabir Dev is the Supreme God who gave rise to Adi Parashakti to hold the universe together. Supreme God Kavir Dev created Goddess Durga, ParBrahm means Akshar Purush as well as Brahm Kaal means Kshar Purush. He created the upper eternal world as well as the lower temporary world.

The aforementioned shreds of evidence from holy Atharvaveda conclude the following important points.

This fact has been revealed by Jagatguru Tatvadarshi Sant Rampal Ji Maharaj. All seekers must take refuge in Him and get their welfare done.