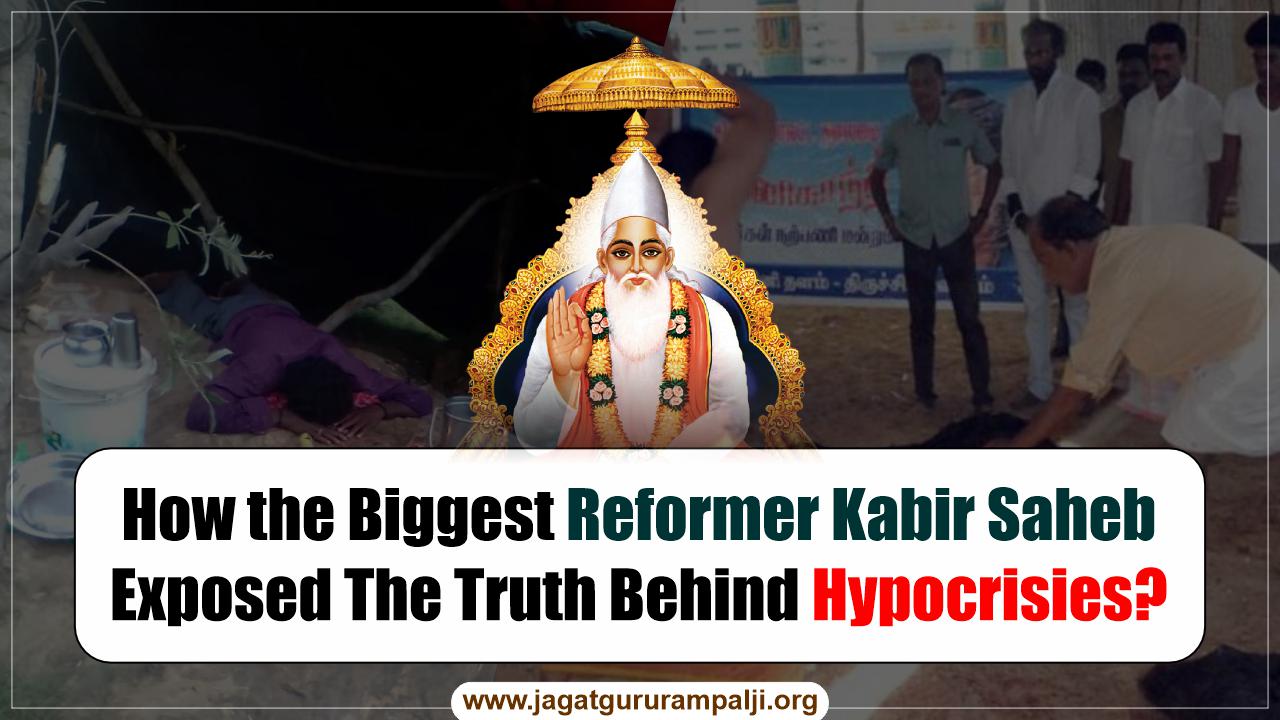 As we all know we are in the middle of Kalyuga and we all believe in God in one form or another. Some of us believe God to be a power only which is running the universe. This belief has divided us into religions with different names and different practices. And in the name of religion and God we are asked to perform a number of rituals in our lives which may or may not be necessary.

But still we do it being unaware about the right process to worship God. These sorts of activities which are not in God's Constitution are called superstition or arbitrary practices. Kabir Saheb appeared by His name on the holy land of Varanasi in the year 1398 to expose all these superstitions existing in the society. The only motive was to let us know the prime goal of our human life and to make us aware about the right way of worship. He abolished several evil practices and hypocrisies prevalent at that time.

Let us know about them in detail. The following will be discussed

Kabir Saheb appeared by Himself on the holy land of Varanasi in 1398, still from His tender age He preached about the worship of one Supreme God. In that process He faced a lot of criticism and challenges, one of which was existing diversity in the caste system. The people of the upper caste were enriched with facilities like education and others, they were not ready to understand that people of other castes also deserve the same rights as them.

Kabir Saheb introduced the constitution of God to them which dictates that we all are the children of one Supreme God and every child is equal in the eyes of their parents and above all God regardless of their caste, race, status, facilities. He further stated that the destinies we enjoy here are the outcomes of our previous virtues (karmas). Therefore, we should not fight upon these temporary things and look to worship God and attain salvation which is permanent in its own. He further stated that we become upper by our good karmas and vice versa.

Being realistic and logical in His approach Kabir Saheb always preached about one supreme religion which is humanity. He further stated that we have mistakenly divided ourselves into religions and are foolishly fighting in the name of God while God wants us to be together. This is against the will of God. Amidst His tenure in Kashi, Hindu and Muslim were two predominant religions but by getting them aware about the true spiritual knowledge He promoted brotherhood in between the two sects.

By giving initiation to the people of both religions, He spreaded and promoted mankind above all sorts of religions and caste. He further taught them we haven't inherited any religion from our birth, it is man made. He used to narrate His discourses in the form of simple couplets. Some people understood and transformed accordingly while some people who were running their business in the name of religion, felt bad. He used to say

There was a false belief rumoured in Kashi, Varanasi, according to which the one dying in Kashi was destined to go to heaven while the one dying in Maghar was destined to go to hell and becomes a donkey in next birth irrespective of the karmas performed during human life. Kabir Saheb unmasked this through His true spiritual knowledge by choosing to depart for Satlok from Maghar only. Sant Garibdas Ji Maharaj mentioned about Kabir Saheb in His holy verses:

In the year 1518, before Kabir Saheb ascended to Satlok, He chose His place of departure to be Maghar. Upon His arrival in Maghar, the very first miracle He did was He flowed the dry river Aami with water which was dry due to the curse of Lord Shiva in front of many people which is even present there as an evidence of that historic episode. Secondly, two of his disciples, Muslim King Bijli Khan Pathan and Hindu King Bir Dev Singh Baghel reached Maghar with their respective armies. The purpose was to fight for His body after death to perform the last rites of Kabir Saheb with their own traditions.

But Kabir Saheb white washed both of them by scolding them upon their intention of fighting. Further Kabir Saheb laid Himself down on a blanket and covered Himself with another blanket too. And He departed for Satlok in front of thousands of people present there. And Kabir Saheb said through an oracle:

And made another oracle instantly stating that ‘I am leaving for Satlok which is way above heaven. And advised the people of both the sects not to fight further and should divide equally whatever you will find under the blanket’. Upon uncovering the blanket only fragrant flowers were found which both the Kings divided half each. Because He was indeed God, He disappeared by Himself (away from birth and death). Not only He abandoned a battle between Hindus and Muslims and also proved the fact that the place of death cannot determine hell or heaven for us, karma does. Sant Garibdas Ji has said:

Afterwards, two monuments were built in memory by both Hindus and Muslims which are still present there in Maghar just 100 metres away from each other. People of both religions live there with peace and harmony. King Bir Singh Baghel took a few of those fragrant flowers to Kashi and made a monument in the memory of Kabir Saheb.

The best thing about a true devotee is that whatever is being said to him, he believes in it with complete heart. Taking advantage of such innocent hearts some false sages have circulated a rumour that by bathing in the river Ganga, one can attain salvation and can write off his sins. This was a wrong misconception being popular in the society at that time. Kabir Saheb disclosed the truth through His true spiritual knowledge.

He said that bathing in Ganga cannot grant a devotee salvation. If bathing was a way to attain salvation then how are the aquatic animals in Ganga deprived of it? He further revealed that only by the refuge of a complete Saint and by the recitation of the true mantras given by Him one can attain salvation, nothing else. Still believing in such wrong facts is like digging a hole for yourself on your own. It is said

Meaning: The whole world believes that going for pilgrimage and taking a dip in Ganga will provide them emancipation whereas the fact is only true worship (chanting of Satnam and Sarnam) helps seekers attain emancipation. Otherwise the soul remains in the trap of Kaal.

Kashi is a place in Varanasi, Uttar Pradesh where Kabir Saheb used to reside. People of those times used to send their old aged parents to Kashi as it was considered as a holy place to reside in the last days of life. False priests and sages of Kashi offered those people to take care of their parents in their own houses in Kashi for living and used to demand money in return. When the old aged people grew in numbers, it started to create problems for priests as it was difficult to manage them.

To resolve their issue they invented Kashi Karaunth (kashi Karvat), karaunth is a blade type structure used to cut woods and by the help of a rope it is adjusted by the side of a river. It was a popular myth in Kashi by the name of 'Kashi ka Karaunth'. In accordance with this myth people under the name of God are being killed by allowing a karaunth (blade type structure) to fall upon them. It was rumoured that the one dying by this karaunth will directly reach heaven and attain God quickly. They called it as an order from Lord Shiva. Upon hearing this people rushed with their old aged parents so as to take advantage of this golden chance.  Sant Garibdas Ji has said:

False priests and sages of those times created a business out of it. They used to demand money for sending them to heaven in a short span. Sometimes when the mechanism of the rope and blade used to get stuck due to some problem while killing someone, they used to mislead people by saying that God doesn't want you to come to him and upon hearing so people used to think that it is really a God made asset.

Kabir Saheb who exposed this Kashi Karaunth as a myth in front of the people. He explained that God cannot call His loving souls by this process. By taking true mantras of attaining salvation from a complete saint one can attain the Almighty God as explained in Holy Geeta Ji Chapter 17 Verse 23.

Sant Garibdas Ji has said in His holy verses that:

Almighty Kabir has Descended Yet Again

Almighty Kavir Dev comes in all four eras. Providing true spiritual knowledge to one of His dearest souls Dharamdas Sahib Ji from Bandhavgarh, M.P. God Kabir revealed the secret at that time that when Kalyug will pass 5505 years He will again come to provide true spiritual knowledge to His beloved souls and by providing true salvation mantras will liberate His children from the clutches of Satan Brahm-Kaal. It is said

Kabir Saheb's Emancipation Day 2023 is being celebrated by Sant Rampal Ji Maharaj as He is the only Complete Saint. He is celebrating this observance in His 9 branches of Satlok Ashram spreaded over the nation and abroad. The celebration will be a three-day celebration from 30th January to 1st February 2023. The celebration shall include the following:

Must Watch the Special Telecast of Sant Rampal Ji Maharaj's Satsang on Sadhna TV Channel and Popcorn Movies Channel at 9.15 Am (IST). 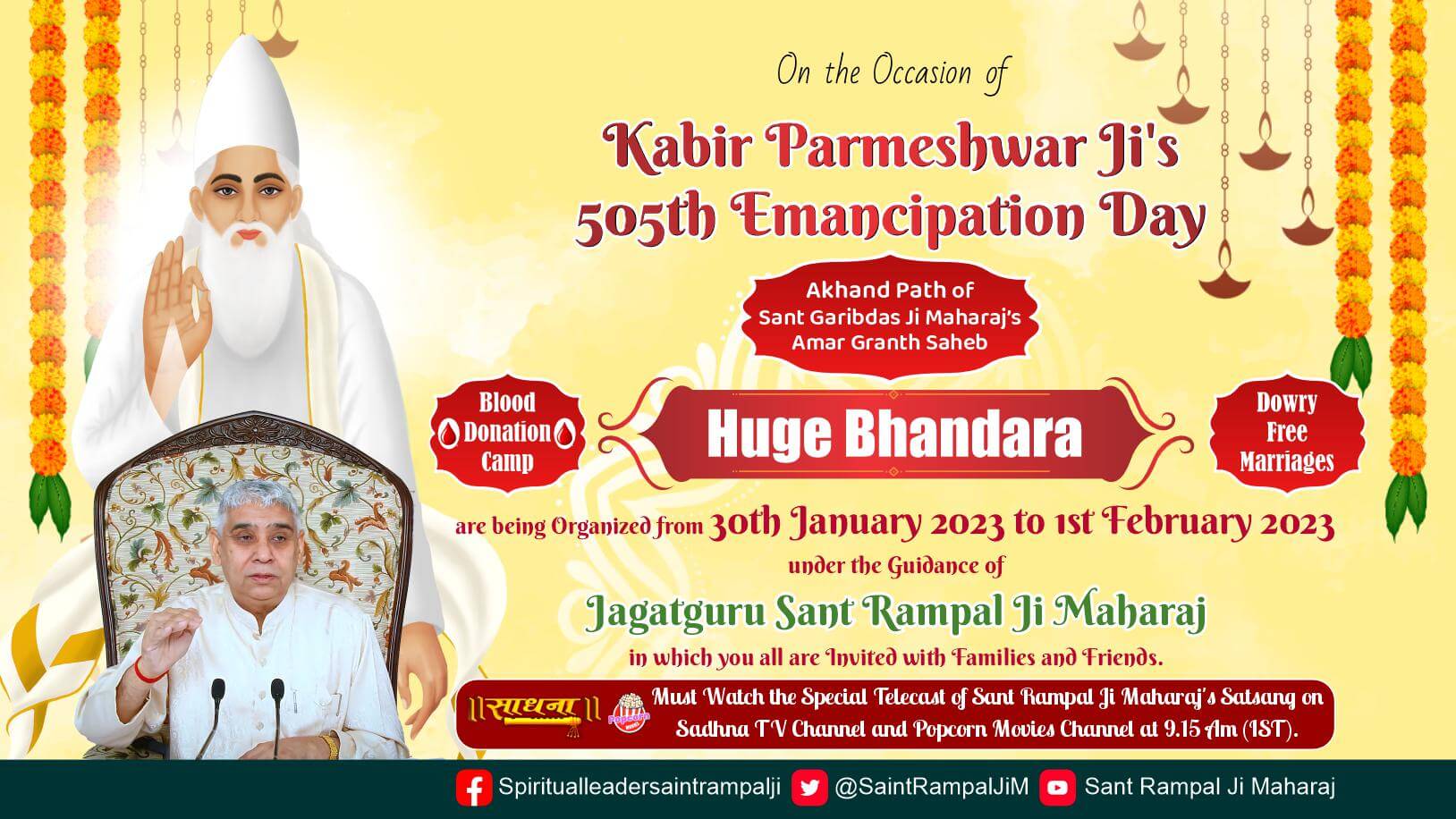 Under the Guidance of Saint Rampal Ji Maharaj, this 3-day Special Program will be celebrated in these 9 Satlok Ashrams.

To get the location of the nearest Naam Diksha Centre you can call our helpline number 8222880541. And to order a free book ‘Gyan Ganga’ and ‘Way of Living’ written by Sant Rampal Ji Maharaj, you can Whatsapp your name, full address, pincode and mobile number on our whatsapp number 7496801823. Else if you want to download pdf books you can visit the publications page on our website www.jagatgururampalji.org. You can also watch the spiritual sermons of Sant Rampal Ji Maharaj on Tv on the following channels with mentioned Indian timings:

Question: Where did the body of Kabir Saheb go?

Question: What is the main reason behind the popularity of Maghar?

Answer: Maghar is famous for spectacles performed by Kabir Saheb

Question: Is it necessary to die in Kashi to attain heaven?

Question: How do you wash away all the sins?

Answer: By going into the refuge of a Complete Sant and doing true worship of Almighty Kabir as told by him and by abiding to prescribed rules of worship. Sant Rampal Ji Maharaj is the complete saint. 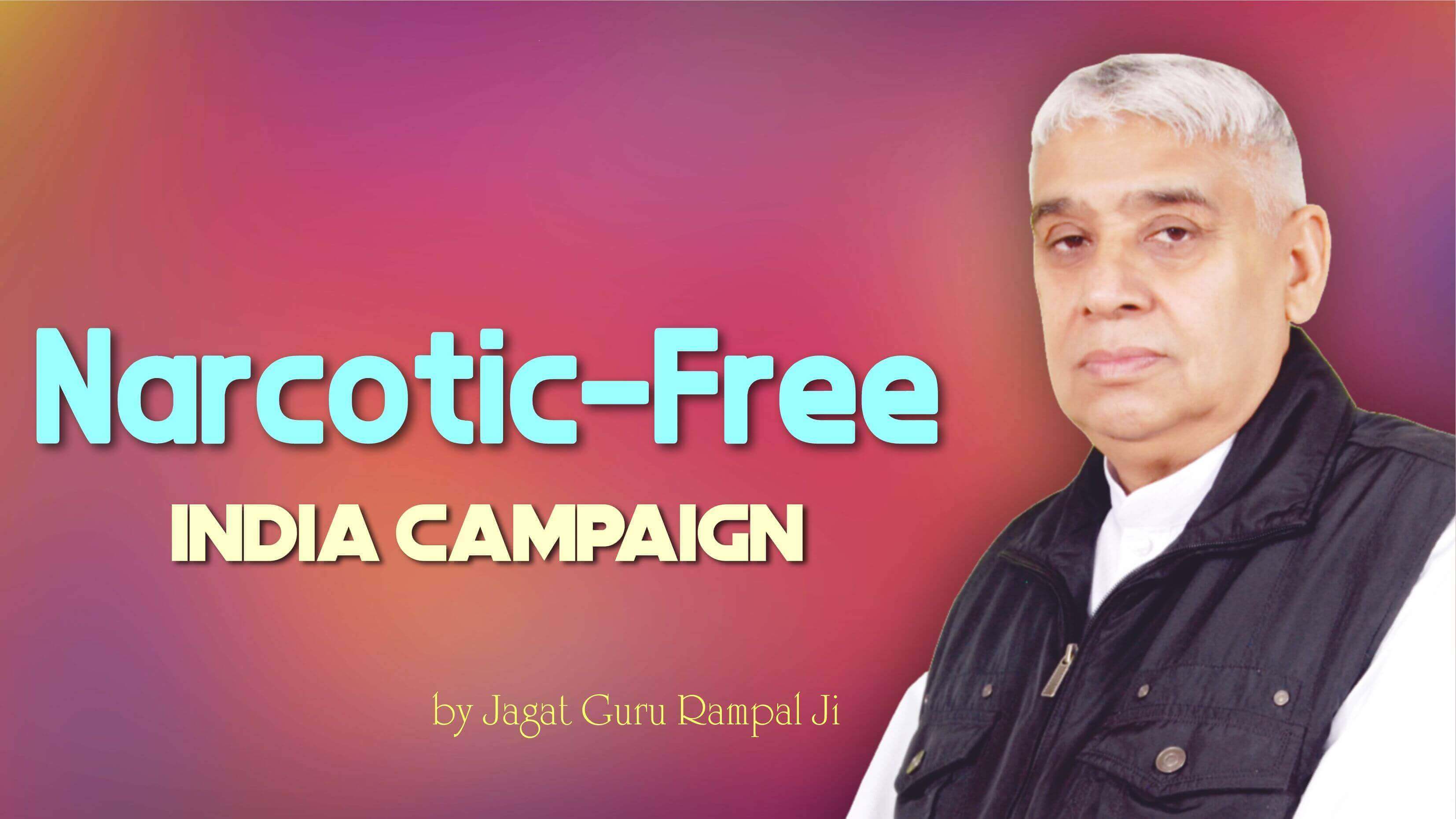 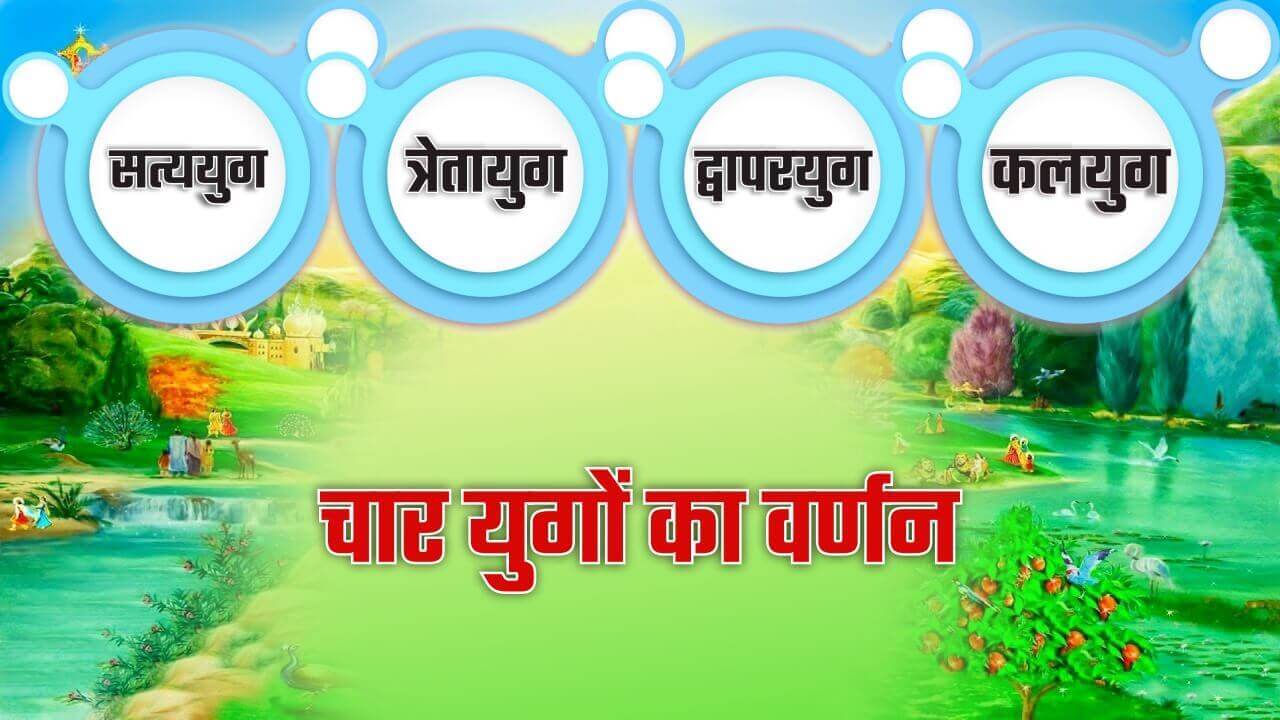