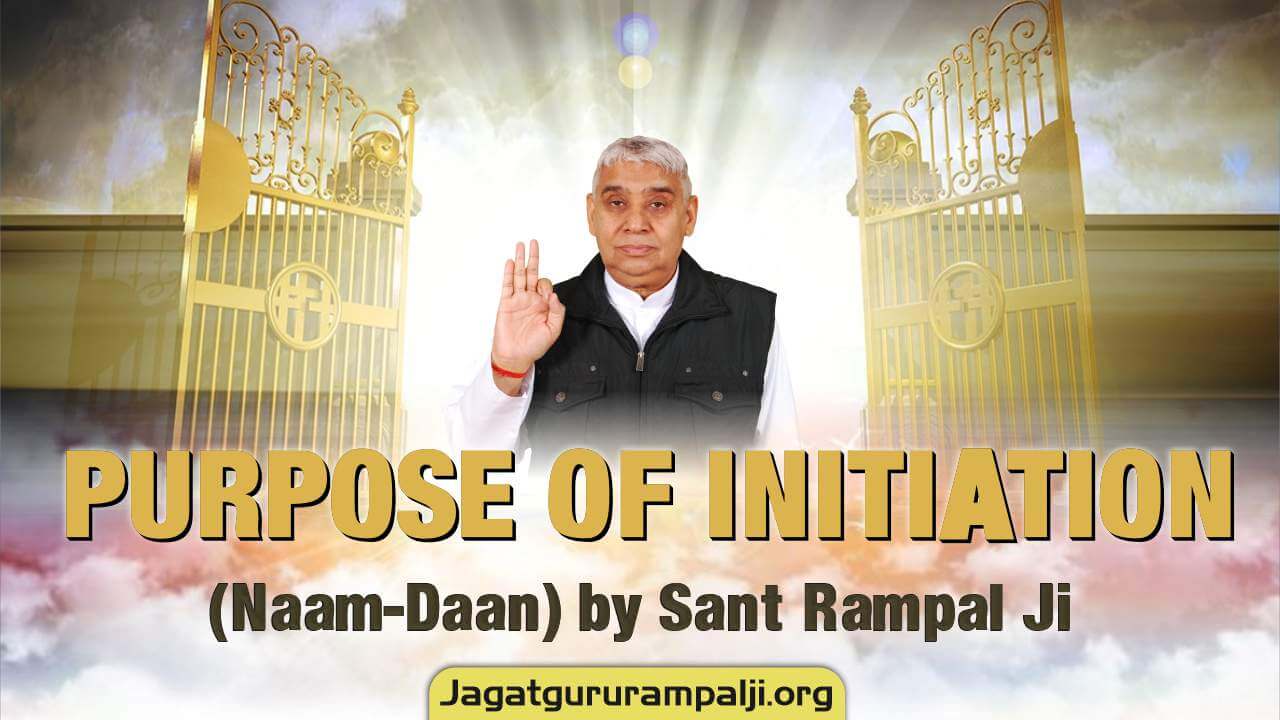 In this uncertain world where anything can happen to anyone at any time it becomes important for every individual to come under the shelter of the supreme power who protects us from all atrocities. In spirituality; true worship holds importance which provides strength to the devotee to face hardships because real mantras granted by an Authorized Saint protects them from all enormity in this world of the villain called Brahm-Kaal. The true worship is backed by the shreds of evidence provided in our Holy Books which clearly state that the Tatvadarshi (Enlightened) Saint grants true mantras (salvation / moksha mantras) in three stages chanting which the souls can land back to the eternal world ‘Satlok’ which is the native place of all souls.

Initiation is a process whereby a person is granted "naam" (mantras) by a True Master / Supreme Saint. It is also called "Naam Diksha" or "Namdaan".

What is the Purpose of Initiation

The main aim of human life is to get "Moksha" (salvation / liberation). Moksha can only be achieved once a soul gets initiated by a True Master. Hence, the sole aim of getting initiated is to attain Moksha.

Readers should take note that "Good Health", "Prosperity", and "Happiness / Contentment" is a by-product of this true worship. Naam should not be taken with a primary aim to achieve these by-products. The aim should be salvation.

Provided a disciple does true worship as ordained by Sant Rampal Ji and follows the rules with a primary aim of achieving salvation, good health and prosperity automatically occur. If someone takes naam with the primary aim of achieving worldly pleasures or getting rid of a misery or distress or a disease, it does not work quickly. One needs to gain knowledge and develop faith before these benefits can be obtained. However, under all circumstances, the aim of taking naam should be the liberation of this human soul or Moksha.

What are the Prerequisites to getting an Initiation

To be able to take initiation, one needs to follow a few rules. It is vital that these rules are followed strictly for the initiation and the worship to be successful / fruitful. Worship does not materialise and is a futile effort if a disciple breaks any of the rules. Please familiarise yourself with the rules of worship.

It is also important that a person willing to take initiation is cognizant of the knowledge imparted by Sant Rampal Ji Maharaj. Knowledge is the basis for consolidation of worship and naam. To gain the knowledge one can read a book called Gyan Ganga which can be downloaded free from the publications page. One can also listen to the spiritual discourses of Sant Rampal Ji which are available throughout this website and can also be found on YouTube.

How can one take Initiation or Naam

Once a person has made up his / her mind to get initiated, the process is straightforward. You need to make contact with your nearest "Namdaan" centre where you can visit and take initiation (naam or namdaan). The contact numbers for most namdan centres can be found at the contact us page.

For people living abroad there are a handful of namdan centres in countries like USA, Canada, UK, Australia, Italy, Belgium, Nepal etc. Please visit our contact us page for more information.

For those who are living abroad and are unable to visit a namdaan centre, initiation can also be given online via a video call / skype call. Please contact us for more information about this.

Naam Mantra is given in 3 stages.

What to Expect during Initiation (Namdaan)

Initiation is provided by Sant Rampal Ji Maharaj via the means of a pre-recorded video.

Is there anything else that one has to do apart from chanting Mantras?

Yes. Along with the mantras, a disciple has to also do prayer of 3 times. This has to be repeated daily.

These prayers are basically recitation of speech of Kabir Sahib and Garib Das Ji Maharaj. This is done in morning, afternoon and evening. It is explained further below.

The book "Bhaktibodh" will be given to a disciple (free of charge) during the initiation process. Disciples can also download it for free from the website. It is available for download from the publications page. It is available in various languages.

How does one get Satnaam or the Second Mantra

The purpose of reciting the first mantra is to pay the debt of 5 major deities residing in our body lotuses. The mantras are specific for those deities. Once a disciple has done this for a minimum of 4 months without breaking any rules, he or she becomes eligible for attaining the second mantra or the "Satnaam".

The process for obtaining the "Satnaam" is similar to the first mantra. It is imparted via a recorded video by Sant Rampal Ji Maharaj. One needs to visit the naamdaan centre to get it. There is a small test that is taken before the second mantra is imparted. In the test one is asked about the first mantra, its significance and the pertaining deity.

Again there is no charge for any initiation.

Yes, there are few extra rules which one has to follow after taking satnaam. These are available with the namdaan centres and will be given to the disciple during or after the first initiation. If you are not given these, then please ask the namdaan centre about it.

Yes, anyone can take initiation irrespective of their previous background as long as they are willing to follow the rules and do worship as directed by Sant Rampal Ji Maharaj.

What is the youngest age at which one can take Initiation

Once a child starts speaking and is able to follow instructions, and has the ability to recite the mantra, they can take naam. This generally happens beyond the age of 3-4 years.

What happens if one breaks or does not follow any rule

If one does not follow any rule then he or she becomes devoid of the initiation (naam). The naam gets disconnected and will not be fruitful anymore. Likewise, the worship will not be successful.

Sometimes a rule gets broken unknowingly / accidentally, which is generally forgiven by Sant Rampal Ji Maharaj but one must never break a rule knowingly.

One has to ask for forgiveness from Sant Rampal Ji Maharaj and pledge not to break any rule to take naam or initiation again. Only after one gets re-initiated, the worship starts to get successful again. A person whose naam is disconnected will not reap any benefits of worship.

Some people cast doubt whether initiation taken via a video recording will have the same effect as to when one takes it in person.

Previously Sant Rampal Ji used to give initiation in person to a group of people but as the number of aspirants increased, He ordained the naam to be given via a pre-recorded video. This was the procedure followed in the ashram too. So people need not worry taking naam via a video as the effect and the end result is exactly the same.

Important: Women and men both have the right to attain God. Women even during their monthly periods (menses) should not stop their daily worship and lighting lamp etc. Nor does one have to stop the daily worship on anyone's death or birth.

What evidence do holy scriptures provide about taking initiation to attain salvation.

Meaning - The Tatvadarshi saint grants true (coded) salvation mantras in three stages. He is the knower of Vedas and has complete spiritual knowledge.

Meaning - The eternal God Kabir manifesting in the form of a Satguru provides Jaap/Sumiran of three-words salvation mantra (coded) to God-loving souls. He blesses them to attain the Supreme God. He even increases the life of his dear devotees.

Meaning - The Knowledge giver of pious Gita Ji tells ‘OM-TAT-SAT’ (coded) is the mantra to attain salvation which is granted by an enlightened saint. He does not know. His mantra straight forward is ‘OM’. But ‘Tat-Sat’ (indicative mantra) is unknown to him. An authorized saint will only grant.

It has been mentioned in pious Quran Sharif that a Bakhabar / Illamwala (Knowledgeable) will tell three-word mantra ‘Ain-Seen-Qaaf’ (indicative) to the devotee which will provide them freedom from the web of Shaitan.

Meaning: This means that you awaken your soul by doing Sumiran of five Naam which are ‘Gujh Gayatri’.

Sant Rampal Ji is the same Tatvadarshi Saint who provides three words salvation mantras in three stages whose procedure has been well explained in this article which is the solution for all willing disciples who wish to attain God. The complete course of attaining salvation has been mentioned in this write-up.

It has been mentioned in Sukshma Veda