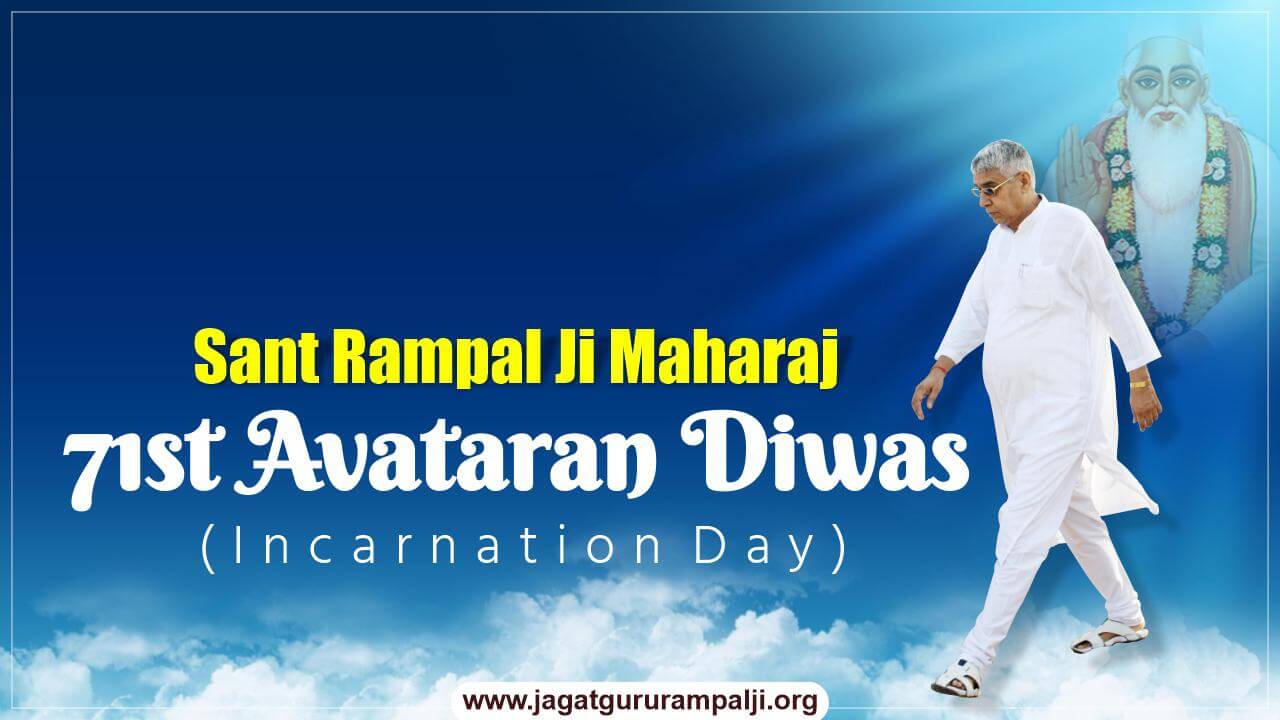 Whenever the cosmos faces a crisis because of increasing evil and there occurs an imbalance of Dharma, at that time, the Divine descends in material form to empower the good and destroy evil and restore the cosmic balance of the forces of good and evil thereby, the establishment of righteousness and peace on earth.

Meaning: Whenever there is a decline of ‘Dharma’ (righteousness) and uprising Adharm (unrighteousness) then only I (Almighty) send my Avatar/Incarnation who appears to protect the virtuous souls and destroy the wicked, and to give the path of devotion, a scripture-based direction, I manifest age after age and perform divine spectacle and establish righteousness.

Almighty, the creator of the entire universe, has descended from an immortal abode to this deceased world and is playing divine spectacle in the cover of great enlightened Saint Rampal Ji Maharaj. 8th September is the auspicious day when every year Avataran diwas (the day of incarnation) of Saint Rampal Ji Maharaj (Almighty Kabir) is celebrated across the globe.

The following will be discussed

8th September 2021 is the 71st Avataran diwas of Jagatguru Tatvadrashi Sant Rampal Ji Maharaj, the incarnation of Purna Brahm/Supreme God who started His spiritual journey on 17th February 1988 and breaking the shackles of social hypocrisy has put millions on the path of spirituality. He is predicted by famous foretellers to be the last messenger who will bring the Golden Era under whose leadership India will become the World Guru. This article will provide a vivid description of the Savior of the World Sant Rampal Ji Maharaj. Stay tuned and go through the article completely.

Moving ahead, first, we will understand the meaning of Avatar/Incarnation.

What is the Meaning of Avatar/Incarnation?

Avatar means the embodiment of the essence of a superhuman being manifested from eternity into the temporal realm to establish righteousness, means to eradicate the burden of suffering souls from the evil forces ruling this deceased world. The incarnation or the manifest embodiment of some noble supreme soul equipped with spiritual perfection is a regular phenomenon on earth that happens in all ages. The Divine Descends, that is, makes an appearance from infinitude into the mortal world.

Sant Rampal Ji Maharaj is the same Divine incarnation of Param Akshar Brahm/Satpurush/Shabad Swaroopi Ram/Akaal Purush who provides the true path of devotion which is in accordance with all holy scriptures, under whose guidance the Golden Era will commence as predicted by famous foretellers.

How is Avataran Diwas Celebrated?

8th September 2021 is the 71st Avataran diwas of Sant Rampal Ji Maharaj. The auspicious day is celebrated across the globe where the nectar speech is showered through spiritual discourses with whose grace ‘present life and afterlife of the souls’ gets secure. He guarantees to emancipate all true devotees who perform Bhakti remaining in the rules of worship laid down by Him. A 5-7 day Path of Holy SadGranth Sahib of Sant Garibdas Ji is recited. Grand community meals-Bhandara is organized where everyone irrespective of caste, creed, religion relishes free and delicious food. Blood donation, organ donation camps are organized, dowry-free marriage, that is, Ramaini is organized.

This year, in view of the COVID pandemic, no physical gathering will be organized. Rather, His special Nectar-like Spiritual Discourses along with the Path will be live broadcasted on two TV channels: 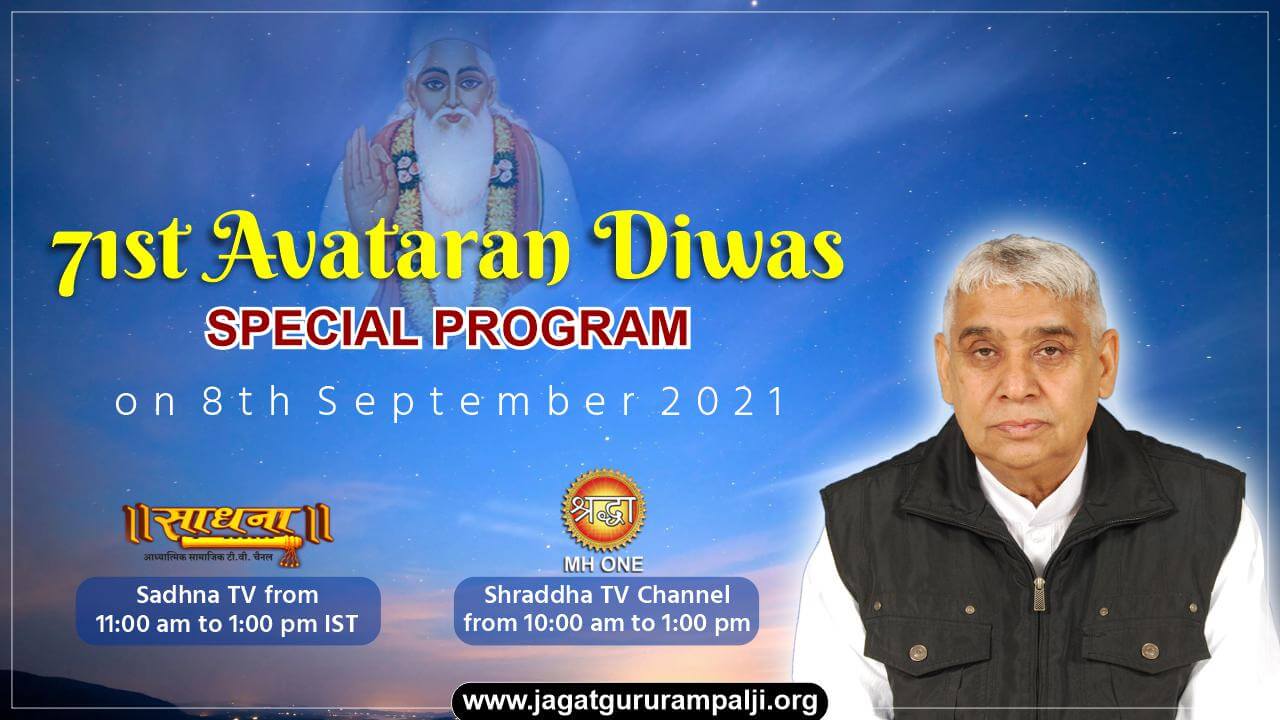 Along with this, a live broadcast from both the TV channels will be available online on the official social media accounts/pages/channels of Sant Rampal Ji Maharaj on Twitter, Facebook, and Youtube. Must watch the precious Sermons and learn the way to get the welfare of your soul done.

Sant Rampal Ji Maharaj is the Director of Satlok Ashram, Barwala, district Hisar, Haryana who is providing true spiritual knowledge of God Kabir which is according to the injunctions of holy scriptures. He was born in a farmer’s family on 8th September 1951 in a small village called Dhanana in Tehsil Gohana, District Sonipat, Haryana, India. His Father’s name is Bhagat Nandram and His Mother’s name is Bhagatmati Indro Devi. Sant Rampal Ji Maharaj has four children. (In fact, all creatures, humans are the children of Sant Rampal Ji Aka Almighty Kabir). He used to work as a Junior Engineer in the Irrigation Department, Haryana Government and continued service for 18 years.

His spiritual journey started on 17th February 1988 after becoming the disciple of Kabir Panthi guru Swami Ramdevanand Ji which is celebrated as “Bodh Diwas” every year (since, this day, His spiritual birth happened). Swami Ramdevanand Ji selected Him as His Successor in the year 1994 saying “There will be no other Saint like you in this whole world”. He gained true spiritual knowledge, since then His life has completely changed. He resigned from His job in 1995, which was accepted by Haryana Government vide resignation letter dated 16/5/2000, No. 3492.3500. He delivered spiritual discourse door to door from 1994-1998. Soon thousands of devotees took shelter and in the year 1999 the Ashram in Karontha, district Rohtak, Haryana was established. He is completely dedicated to spreading the true path of worship across the globe with which souls will be emancipated.

It has been mentioned in Suksham Veda, that is, in the nectar speech of God Kabir Saheb

Aiming for the welfare of the whole of mankind Sant Rampal Ji Maharaj despite facing hardships at every step from various fake religious leaders, contemporary sages, and saints have succeeded in reaching masses and making a place in the heart of every devotee who is doing true worship as told by Him through spiritual discourses and are getting benefit every day. To refrain devotees from listening to the true spiritual knowledge of Sant Rampal Ji Maharaj, fake media and religious gurus highlighted His name and created a negative image amongst the masses. But true worship provided by Him has changed the lives of millions of devotees across the globe who have risen from swamps to happiness and comfort ― be it health, financial stability, family bonding, and so on ― hence, all the efforts of fake gurus went in vain. Only a complete saint who is the representative of Almighty possesses this quality as certified in holy scriptures. To know the true identity of complete Saint Rampal Ji Maharaj everyone must read the linked Article.

The souls have been trapped in the cage of butcher Brahm Kaal from ages and are suffering day and night. Almighty Kabir is the Savior who descends in every age aiming to liberate His dear souls from the web of butcher Kaal. Sukshma Veda provides evidence for the same.

Almighty has descended yet again and is playing divine play in the form of Sant Rampal Ji Maharaj whose sole aim is the welfare of the whole of mankind. He has incarnated to liberate suffering souls by imparting true spiritual knowledge so that they may land back to their ever-happy native abode Sachhkhand going where birth and death finishes once and for all, and souls never come back to this mortal world. He disclosed the hidden secret of the creation of nature or the universe as per religious books. Sant Rampal Ji’s spiritual knowledge is unparalleled and unprecedented following which devotees gain all benefits; be it financially, health, or spiritual enhancement and even life extension.

The sole aim of human birth is to do true worship of the creator of the universe and attain emancipation. God-loving souls are, therefore, requested to listen to the spiritual discourses of Sant Rampal Ji Maharaj take refuge and get their welfare done.

There will be peace and brotherhood all around and a new civilization would be based on spiritualism which would originate under the leadership of a great spiritual leader from India born in a rural family. The great spiritual leader would have a very large following of the common people who would convert materialism into spiritualism. India under the guidance of the great Chyen (Avatar Sant Rampal Ji Maharaj) would lead the world in religious, industrial, and economic terms and only His way of worship will be acceptable to the devotees in the whole world.

Nostradamus has predicted that the great Chyren, the middle-aged (55-60 Years) nobleman belonging to the Hindu community will come in light by the year 2006 who will bring Golden Era and will provide scriptures-based true worship that will sway ignorance and whose fame will reverberate beyond Sky. He will liberate souls from the Devil and will make them attain Supreme peace.

It has been mentioned in Holy Kabir Sagar, that is, Sukshma Veda, which is the nectar speech of Almighty Kabir that ‘when Kalyug will pass 5505 years then His 13th Descendant will come to impart true spiritual knowledge and would establish peace by eradicating unscriptural knowledge and false religious practices. He will be authorized to grant true salvation mantras to seekers (evidence Bhagavad Gita Chapter 17 Verse 23). All souls will quit evil and become virtuous and will glorify the Avatar of Lord Kabir.' Kalyug completed its 5505 years in the year 1997 and the same year Almighty Kabir met great Sant Rampal Ji Maharaj and permitted Him to grant name initiation to pious God-loving souls. Evidence of the same is in the nectar speech of God Kabir

That great Purush is none other than Sant Rampal Ji Maharaj, the Avatar/Incarnation of Satpurush/Lord Kabir whose Avataran diwas is celebrated every year on 8th September.

Spiritual Leader Sant Rampal Ji Maharaj has made a great contribution to the social upliftment as well as eradication of evils of dowry. The disciples of Sant Rampal Ji Maharaj do not give or take dowry in marriage. A 17 minutes Ramaini is recited which bonds the couple into a relationship. Evil social practices like consumption of intoxicants, bribery, corruption, female feticide have all been nullified with the true spiritual knowledge provided by Sant Rampal Ji Maharaj. No disciple consumes all this stuff and does true worship because they have gained knowledge that the sole aim of human birth is to do true worship which is scriptures-based and attain salvation. Sant Rampal Ji Maharaj has exposed every religious hypocrisy prevalent in society and has shown a true path of worship with which millions of followers are leading a prosperous life.

Identify the Messiah/Avatar, the Savior of the world Sant Rampal Ji Maharaj well on time else there will be left nothing except regret.

“Our Race is Living Being, Mankind is our religion,
Hindu, Muslim, Sikh, Christian, there is no separate religion”

Sant Rampal Ji Maharaj, the World Victorious Saint is the Avatar/incarnation of Lord Kabir and has descended to diminish iniquity spread all around, to remove ignorance and liberate trapped souls. Take refuge and make the best of your human birth. Attain Emancipation, attain God