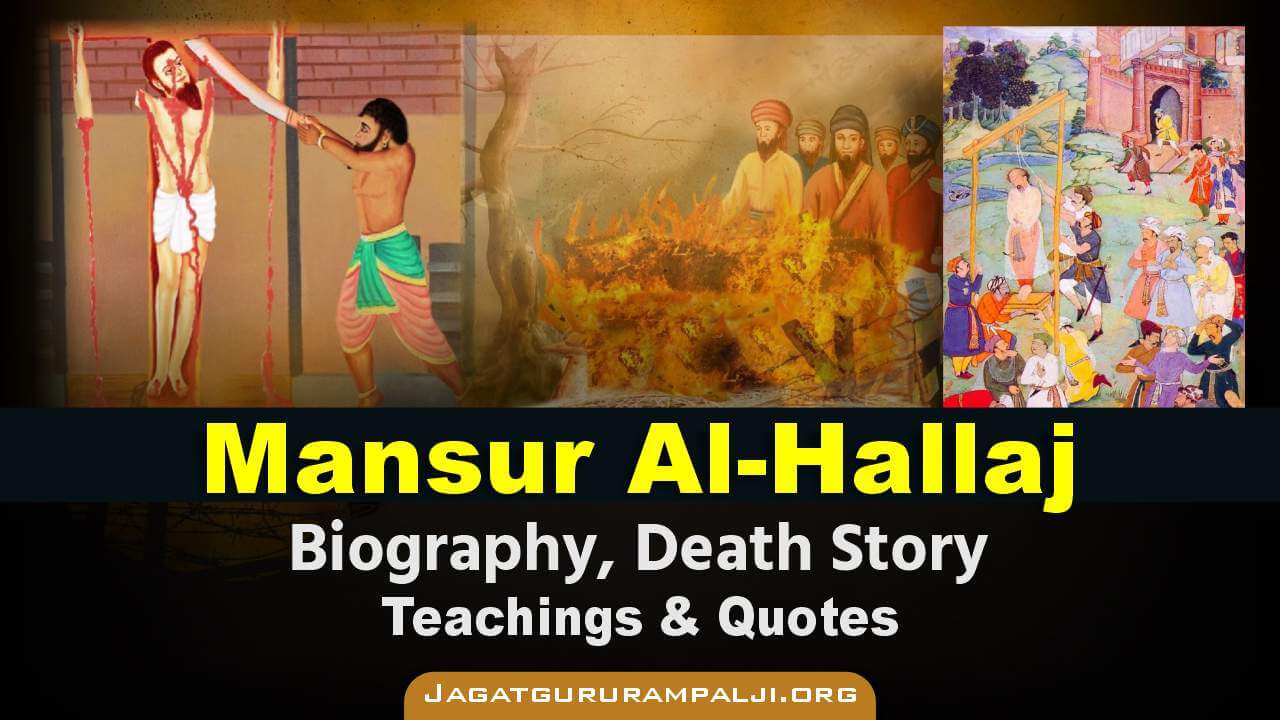 Mansour al-Hallaj (also spelled as Mansoor al-Hallaj or Mansur al-Hallaj) is a Persian mystic born in 858 CE in Iran. He is celebrated for his sacrifice towards Worship. He was executed for staying firm on his spiritual Path. He died in 922 CE in Iraq. We will read his biography, teachings, and the Views of Saint Rampal Ji on his biography in this write-up.

Abu 'l-Mugith Al-Husayn bin Mansur al-Hallaj (full name of Mansur) was born in 858 CE in the Fars Province of Iran. He had been doing worship for Eras because of which he had spiritual disposition in that life as well. Allah Kabir made His soul Mansoor take Initiation from a Saint by performing a divine act.

Background: Allah Kabir, as per His Law, met one of His pious souls Samsh Tabrez (Shams Tabrizi) and gave him His Knowledge. He told him that Allah is in human-like Form and His Name is Kabir. He, then, took him to Satlok and left him back in his body. Allah Kabir gave him "Ana'l Haqq" Naam-mantra for recitation. After this, Samsh Tabrez (Shams Tabrizi) started giving Initiation and the Knowledge of Allah Kabir to the people. Some of them took initiation from him. One of them was Mansour al-Hallaj's sister Shimali.

Shimali became a great devotee of Samsh Tabrez (Shams Tabrizi). She used to daily go to his Ashram to serve him and to listen to his spiritual Discourses. Seeing her saintly conduct, her father could not stop her from going to the Saint's Ashram and used to allow her to go there. One day, someone said to Mansoor Hallaj, "Shimali goes to the Ashram daily in the evening time. Stop her from going there. It's a question of honor."

Mansour thought, "Let me follow her today and see what she does there before directly asking her to stop going there." So, that day, when he saw his sister going to the Ashram, he followed her.

On reaching the Ashram, Shimali started doing the Service of the Saint, like washing utensils and clothes. The Ashram was very small. There was a hut inside the Ashram. It was the summer season. The Saint was sitting outside of the hut in the courtyard on a Charpai. Mansour was peeping inside the Ashram through a hole in that wall. After Shimali finished doing the Service, she sat near the Saint and started pressing His Feet. Saint started delivering spiritual Discourses. Every day the Saint used to deliver Discourses for 30 mins. That day, he delivered Discourses for 2 hours. Mansur was paying attention to every word and activity inside because he was looking to find some faults while his soul was satiated on hearing the Spiritual Knowledge.

Then, on the completion of the spiritual Discourses, both the Saint and Shimali raised their hands forward asking for Prasad (Blessed Food) from God. Two bowls filled with Amrit (Nectar) came from above on the hands of both. Shimali drank the whole bowl. The Saint left half of the Nectar and asked Shimali to give the rest of his Nectar to a dog standing outside. When Shimali reached near the wall, Saint said, “Throw the Nectar through the hole else the dog can run away.” Shimali obeyed the Orders and threw the Nectar through the hole with which Mansour was spying on them.

Some of the Nectar touched Mansour's tongue, and all of a sudden Mansour started contemplating, "How bad am I that I thought so wrong about this Great Man! I am the lowest of the low that I doubted the Saint." He started crying and went inside the Ashram. He confessed his bad intentions and asked if he could also be salvaged. The Saint said, "Before taking the initiation, sins like this are forgivable because they were committed unknowingly. If after taking initiation, one develops such thoughts towards their Guru, then that is not forgivable."

Mansour took initiation from the Saint. After this, Mansour and Shimali started going together to the Saint to do the Services.

Mansour became so engrossed in the worship prescribed by the Gurudev that he started chanting Ana'l Haqq by uttering it. There were some other people also in the locality who were initiated from the Saint but none used to express openly that they do the worship given by the Saint due to the fear of public opinion. But, Mansour was lost in the Love of God.

Ana'l Haqq literally translates as "I am God", which opposes the Muslim beliefs that Allah doesn't come in Form and that no Jeev (living being) can be a God. This is true that no living being can ever be a God, but they misunderstood it. Naam-mantras given during initiation are not to be translated, but just to be chanted as instructed by Gurudev. Contemporary Muslims were offended that Mansour used to say that Allah is in Form, and He looks like a human. He comes with His Body on earth. Muslims started raising issues that Mansour called himself God and whoever called himself God was worthy of being punished. They used to forbid Mansour, but Mansour didn't listen to anyone. People made these complaints with the king, who was also the father of Mansour. Due to the pressure of the public, the king asked his son to stop chanting Ana'l Haqq. But, Mansour kept chanting it. Then, the king had to order punishments for Mansour.

The king asked the public what punishment should be given to him. People said, “Make him stand on a Chauraha (crossroad), and all the people of the city will turn-by-turn throw stones at him. And, before throwing stones, every person would ask him to stop chanting Ana’l Haqq. If he would not stop, then throw stones at him.” The king agreed.

Mansour al-Hallaj was taken on the crossroad. Everyone asked him to stop saying Ana’l Haqq and hurled stones at him while he was smilingly chanting, “Ana'l Haqq. Ana’l Haqq.” His whole body got wounded. Then, Shimali's turn came. Shimali, fearing the public opinion, thought, "I will not throw a stone on brother but will throw flower so that neither would it hurt him nor would the people oppose me." Thinking this, Shimali picked a flower and stood silently before him. Mansour said, “Shimali! Chant Ana’l Haqq!” Shimali threw the flower at him. Mansour started crying bitterly.

Shimali asked, "Oh Mansour! People were throwing stones at you and you were laughing. Did my flower only hurt you so much that you started crying?"

Mansour replied, "Shimali! They knew nothing. They could say anything to me. You know on whom am I dying. How did you raise your hand towards me? Gurudev will not forgive you."

Muslims bury the dead person's body but for Mansour, they said, "He is a Kafir. Kafirs are burned. Burn him." They burned his body and flowed the ashes into the river. It is said that even his ashes were chanting Ana'l Haqq.

After a short while, there appeared one thousand Mansours in the locality strolling in the streets chanting Ana'l Haqq. People went inside their houses fearing that they might be some ghosts, and also contemplated and repented that they tormented a devotee of Allah. 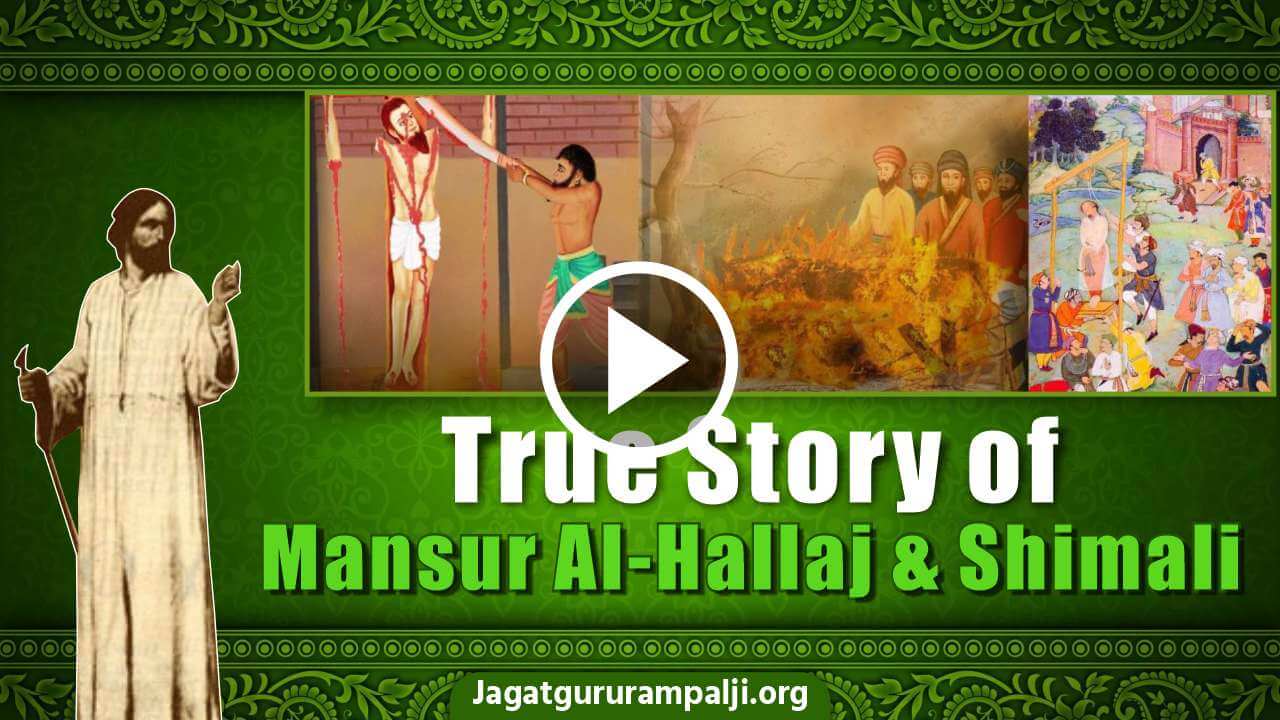 1) It was not because of Ana’l Haqq mantra but the virtues accumulated in some previous lives that made Mansour so engrossed in Worship and show such miracles. Else, there were Shimali and other initiated people also in the city who were also chanting Ana’l Haqq, why did only Mansour had this Power, and none other?

Like, some pious souls with good loads of virtuous deeds of some previous lives go to fake saints. Then, even there they experience some benefits. Just as there is a bowl filled with Ghee, and it also has a Baati (a piece of cotton that lights a Jyot). And, it was lit earlier but it blew out. So, now it has everything prepared: Baati, bowl, and Ghee. Only a lit matchstick is needed to start the Jyoti again. Now, if we don’t put more Ghee into the bowl, then in some times, all the Ghee will get burned and that bowl will become empty. Similarly, pious souls have all the setup ready. And, the fake saints also inspire them to do worship. But, if they don't have a Scripture-based way of Worship like Ghee, then in some times, they become devoid of the Bhakti.

Sant Garibdas Ji says on this—

Meaning: Oh pious soul! This is your virtuous deeds of some previous lives only that you are getting benefits.

Meaning: Saint Rampal Ji Maharaj Ji says that it is a matter of consideration that the Eternal God and His Eternal Place, for attaining which great men have sacrificed to this extent, how beautiful would they be?

The following Baanis are the Poems of Mansour Hallaj taken from the Sacred Book “Mukti Bodh” page no. 201:

Meaning: In the above-written Baanis (Poem) of Mansour al-Hallaj, he gives the following teachings:

Meaning: Oh seeker! If you want to meet Allah, then keep reciting the Naam-mantra with every breath (Dam).

Meaning: Don’t remain hungry by keeping fasts (Roza). Don’t bow (Sijda) in the palace of stone by going to Masjid. (Vaju) Only by bathing in the water, there is no Salvation. The recitation of true Naam-mantra will lead to Salvation. (Kuja tod de) Break the pot, i.e., renounce the misleading path. Keep drinking the alcohol of the recitation of true Naam, i.e., intoxicate yourself with the Naam of God (Ram).

Meaning: Love God. Clean your heart with the broom of that love. Blow out the dust of (Dui) jealousy, i.e., don’t be jealous; do Worship.

Meaning: Break the string of beads (Tasabi), i.e., recite the Mala of Man (mind). Flow the Kitaabs (Quran, Injil, Tawrat, Zaboor — these are called four Kitaabs) into the water. These don’t have the way to attain God. What do you have to do by becoming knowledgeable (Masaik)? Destroy your arrogance (Majikhat).

Just like Sultan Ibrahim Adham, Bayazid Bastami, and Rumi, Mansour al-Hallaj was also one of the pious souls of Allah Kabir. He remained devoted to the way of Worship told by his Gurudev Samsh Tabrez (Shams Tabrizi) even when everyone was standing against him. He used to say that Allah has a human-like form, and He is not attained by eating meat or by visiting Masjid, etc. Everyone opposed him, but he remained firm on the True Knowledge given by Samsh Tabrez (Shams Tabrizi). Saint Rampal Ji says that such devotion towards worship arises in those only who have been performing the Scripture-based way of Worship for Eras. Also, it is a matter of consideration that the Supreme God and His Place, for attaining which he sacrificed himself to that extent, how beautiful He might be?

Currently, Saint Rampal Ji Maharaj is telling that Scripture-based way of Worship and that True Spiritual Knowledge that can lead to the Eternal God and His Eternal Abode. Take Initiation from Him, and get your welfare done.